Rebuild time for my Upshur single

Ok, I did get the cam blank done but I will go into that more later. I don't want to go back between the two forums to figure what I have and haven't covered. So to keep in order and not confuse myself, what I did next was the muffler. I used the same program on the mill to machine brackets to silver solder on the end to bolt onto the manifold. After trying to use my propane torch I quickly found it didn't throw enough heat. 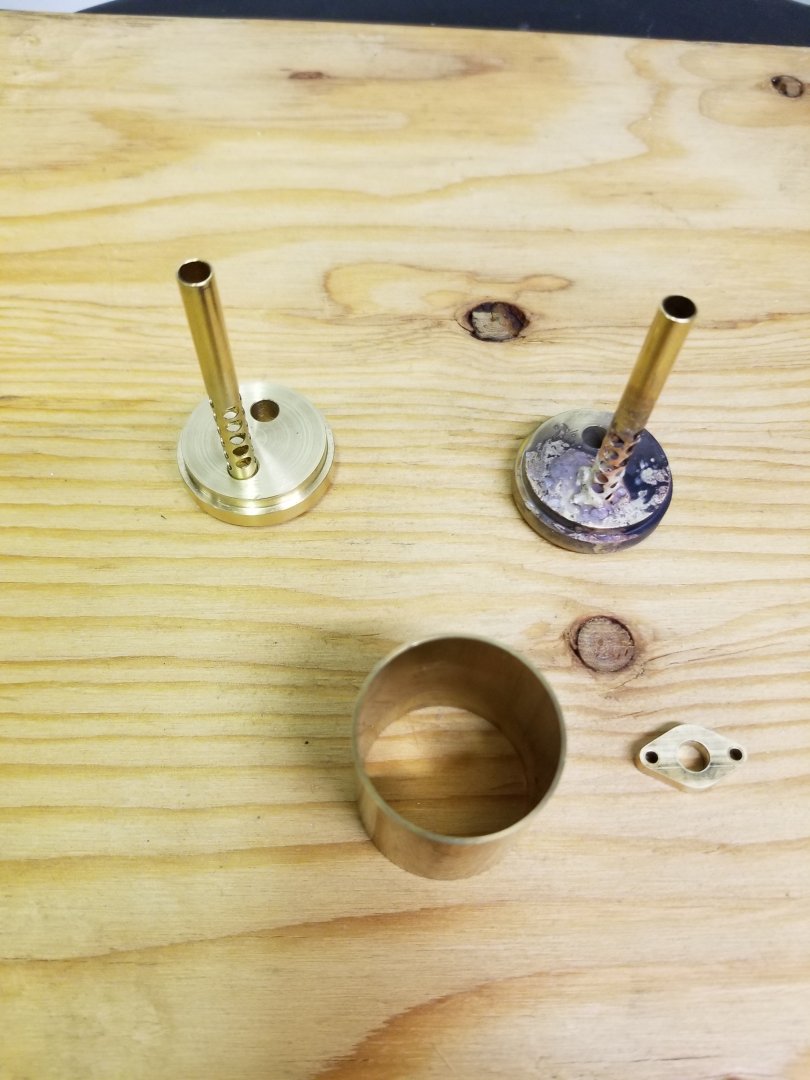 This is the first attempt. I later pulled out the oxy-acetylene torch and this was the result. 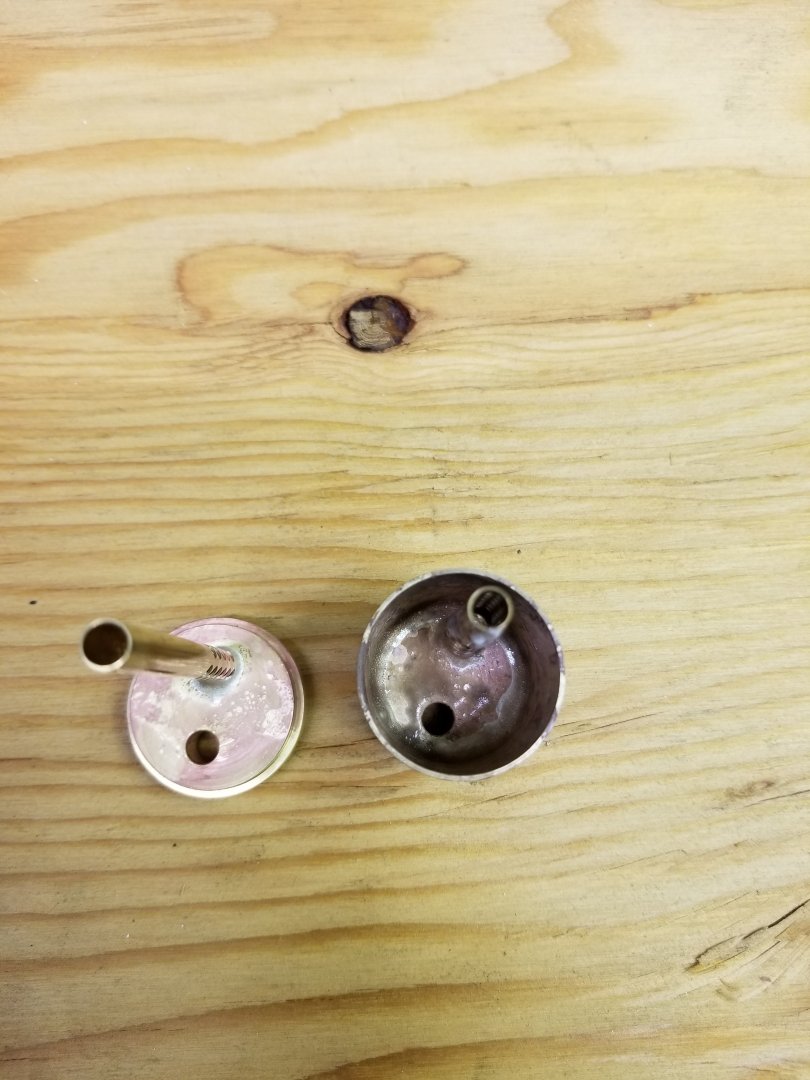 I soldered the dead end of each tube in, then the outer tube to one end. It all worked much easier when I changed the tip from #1 to 0 much better control. I then used some stock as a mandrel and bent the solder to fit around the inside of the tube and one to go around the small tube. That worked really well. Then I went on to solder the mounting bracket on to the end. Here is the whole works after being soldered together. 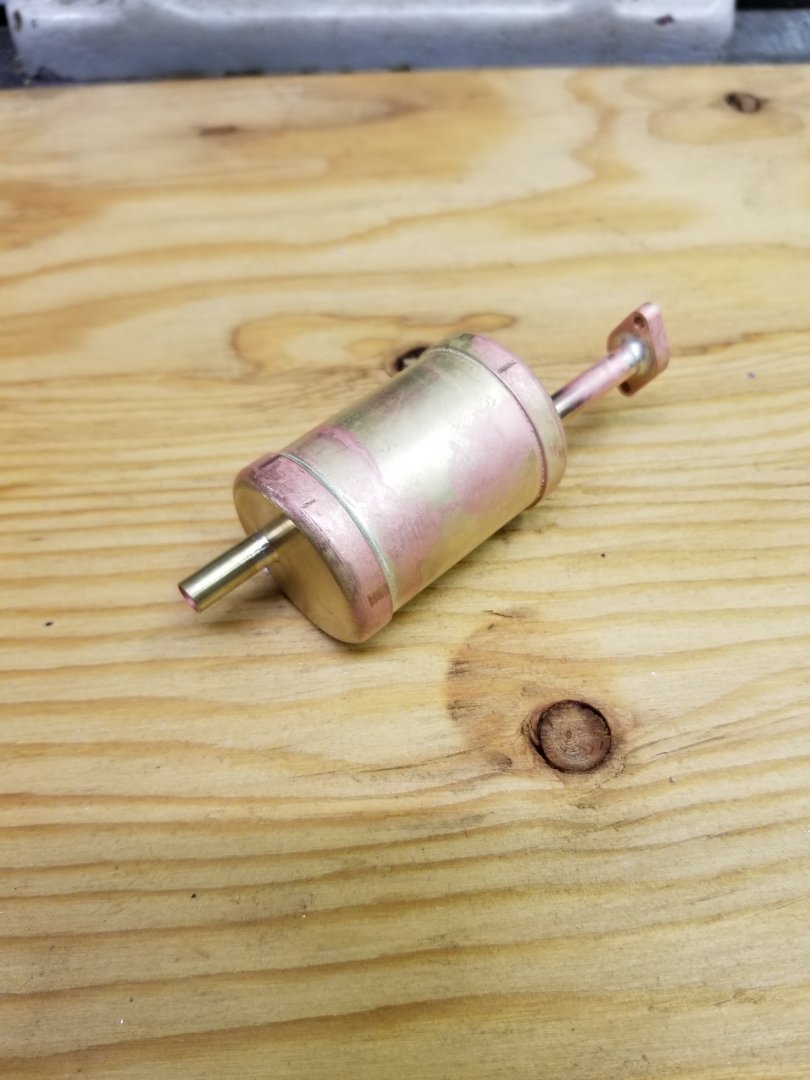 Next up was turning the end caps to the same diameter as the tubing. Filing the radius on the corners and some sanding to clean things up. 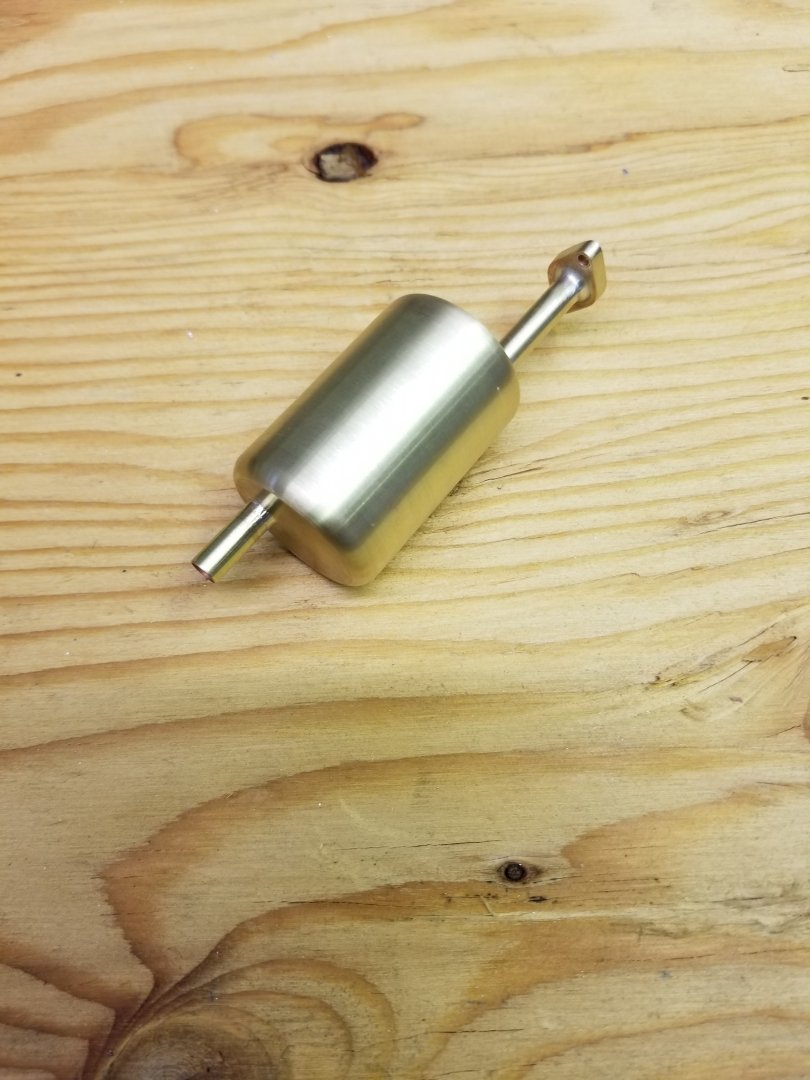 Mind you it wasn't quite as easy as it seems here, I waved the torch past the baffle tube and melted it in half, had to make a new one, that seemed to be a theme. Tried to do even holes rather than offset 1/2 the distance, that resulted in a new one. To get the two pieces that are just under 5 inches I used the whole 12 inches I got from the hardware store. Oh, and that solder joint at the top of the last photo, that's my favorite solder joint. But that was my third and last mounting bracket. More to come.
Art

werowance,
Thanks, It did take some doing but the end result turned out quite well. I just threw together some ideas from my understanding of an automotive muffler. I just hope it works as well as it looks.
Art
J

Please stand by we are experiencing technical difficulties. I think I sorted out all the issues to run my cam machining program then the mill went funny. I couldn't zero the Z axis. So I am planning to reinstall PathPilot and all the updates then see what it does. My nephew had it and mailed it, should show up any time. He worked on my computer in December.
Art

Hi everyone,
After some problems I now have a new cam. I had the program written two weekends ago but, I had some problems with my mill and couldn't run it. I couldn't zero the Z axis on the mill. I had even run the program an inch above the part, dropped it down & had to shut it down before it crashed. At that point if I zeroed it, it changed the number to .3645, if I tried to edit the number it was changed to something like .3625. The program runs between Z0 and .073. At that point I gave up and asked my nephew if he could send me my PathPilot flash drive, which he did. I had intended to re install the PP operating system and updates and try again. A week later it still hadn't arrived. He's going to check on it and find out where it is. This morning wanting to finish the cam I fired up the mill and presto it worked, so the end result is this cam. 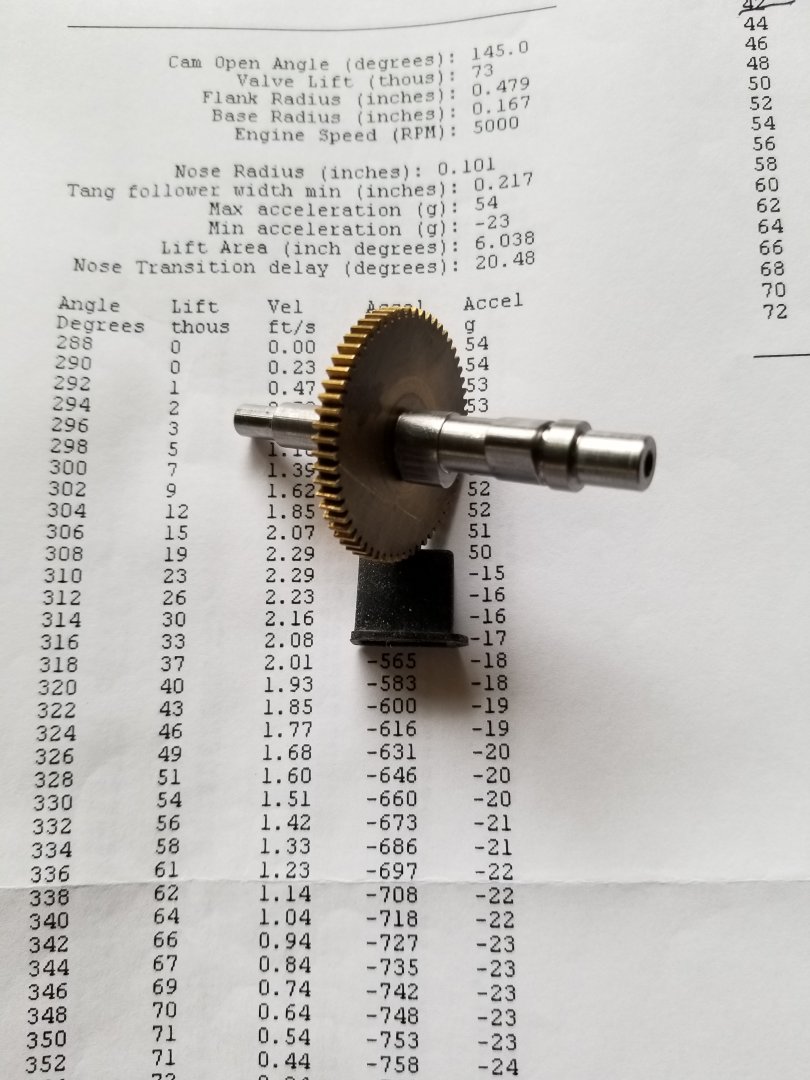 The dimensions are straight out of CamCalc. I had designed a different cam profile for the exhaust cam, but after the intake cam machined properly I didn't want to take a chance Murphy would show up and screw up my cam. So the settings in CamCalc you see in the upper left hand of the photo are the ones used in both. It was a lot of work to add 180 steps to the program but it does work, takes about 24 minutes and with a little editing will work on any cam profile.
Art

Very nice looking piece. I have used the camcalc before and it is great.

Steve,
Thanks, It was a bit of work and experimenting to get a working program. I originally made a rectangle in Alibre roughly the width of the cam ran one pass ti clean up the surface. Then I posted it and added the 180 steps. When I realized it was going to take 17 seconds to rotate 2 degrees I then added the 180, G0 & G1 moves so the whole run time was 24 minutes. I could probably fine tune it but it worked. I had intended to run the exhaust cam with about 130 degrees cam open angle, but left well enough alone.

Ok, I had grandiose plans to work on the rod over the holiday weekend. Turned on the switch that turns on and off the computer and pop. Talked to my nephew and ordered a new power supply in hopes that was all that was wrong with it. I think it'll be here in a few days, then I will find out.
Art
You must log in or register to reply here.

Not Bad for a College Student