The lubrication system is kind of 2 systems. Induction comes via the rear carb, through the manifold plate & enters the CC horizontally. Therefore a healthy lubricating mist covers the master rods, crankpin, connecting rods etc. before it is redirected back into the rear manifold, up the induction tubes & into the heads.

The front nose cases houses the ring gear assembly, cam plates & pushrod lifters. The lifters slide up & down within their bronze bushings. The nose is case bolted to a front plate which in turn is bolted to the CC. The front nose section has an O-ring on its perimeter & is sealed off from the CC. The nose case is partially filled with oil so basically the cam parts & gears are splashing in a bath. So far so good.

This lubrication system is replicated on the larger Ohrndorf 9-cylinder so I have every reason to believe it works. He defines a volume for the ‘engine oil’ (10-15 cc in the 9-cyl) which makes me believe at least the bottom third of cam plate is submerged. He doesn’t define oil viscosity but I assume it can’t be too thick without causing drag issues.

The issue is, I can’t see how oil is not going to gravity feed migrate from the nose case bath, out through the bottom 4 lifters, meaning the annular gap between the lifter rod & it’s bushing. There are provisions for pushrod tubes which fit over the lifter bushing, but that just means oil would continue down the pushrod tube into the lower valve cover area. The lifter/bushing must be sliding fit between them. I could extend the length of lifter bushing into the nose cavity a bit to try & keep a volume just below the spill point. But I have to think it’s going to get slung around.

Another option is to deviate from the plans. I could modify the front plate, make passage holes so that the previously mentioned inlet charge from the rear is allowed to continue forward through the CC & also mists over the cam components.

So that brings up other glow radials for comparison..

The Jung glow radials (or at least the 5 & 7 cyl I’m aware of) have a 1 piece CC with an integral front face which has large webs cut out. I interpret this arrangement to accomplish what I was mentioning – intake charge mist is providing lubrication to both the crankshaft & forward to the cam components.

The Edwards-5 radial was designed to burn straight methanol but has an oil pump. I looks like one oil circuit squirts into the CC, the other into the nose case.

But I lose track of the oil system inside the nose case. It looks like a kind of sump but I’m not clear if it’s sustaining an oil level, or it somehow drains at a lower elevation? If it has a sustained oil level, it looks like the lower lifters would be partially submerged which would be equivalent to what I'm looking at. No push rod tubes, so maybe weep oil volume is small & just gets blown back by the prop. Any running conditions input any of you can provide?

Hi Petertha,
While my radial is a little more involved, with feed and scavenge pumps, I have also considered some possible additions which may be useful for your engine.
The exhaust valve covers are likely to generate some pressure as exhaust leaks past the guide. This pressure can be used to 'pump' oil.
If the upper cylinders have their valve covers vented to an atmospheric breather and the lower cylinders have their valve covers connected with a small pressure balance pipe, the flow of gas from the lower covers, up the pushrod tubes and out from the upper valve covers will return oil via the pushrod tubes to the nose case.
For my engine, I am considering an air pump which would continuously draw a partial vacuum in the cases. The pump would draw air through the breather at the top of the oil tank, via a swirl pot to separate oil mist and return it to the tank. I have used a similar system on a motorcycle engine with good results in terms of reducing oil consumption and reducing external leaks.

Hi Peter,
In the original desigs all oil is flowing to the sump underneath the engine, so there is no oil resting in the camhousing. 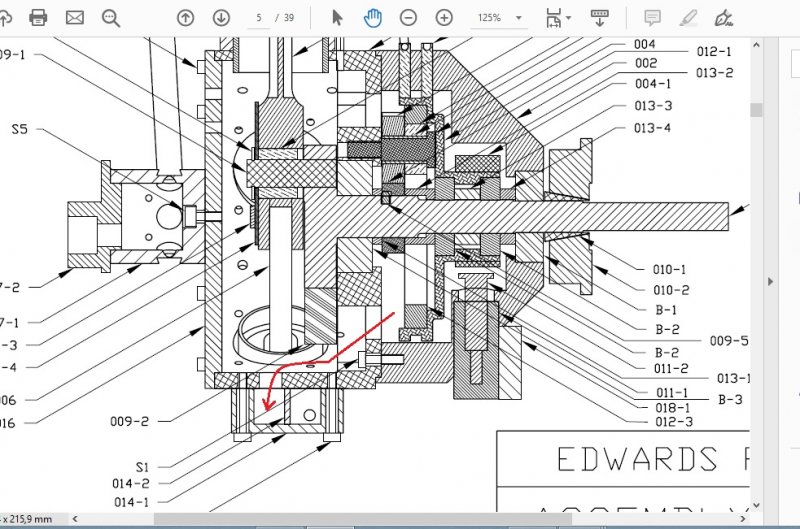 I have mad my Edwards slightly different, with the camhousing separated from the crankhousing. Lubrication of the conrods is achieved from the oil blow-by from the pistons. To provide adequate lubrication for the idler gear I moved it from the top to the bottom of the cam housing. There are a breather, drain and filler ( also level) plug. The level plug is about halfway the camhousing height resulting in a camdrive half filled with oil. I assume the oil level will drop during running because the oil will be swept around the camdrive space by centrifugal forces.
This became apparent during the first run when the oil dissappeared from the breather.. After that I blocked the breather 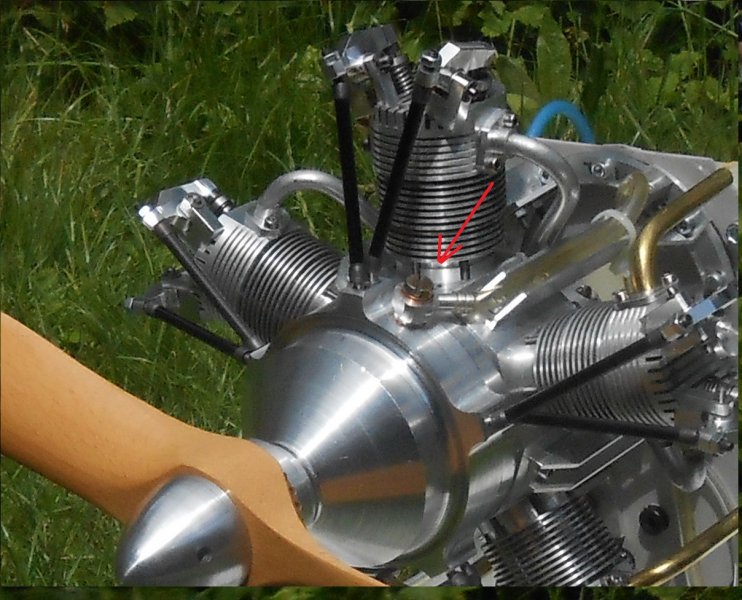 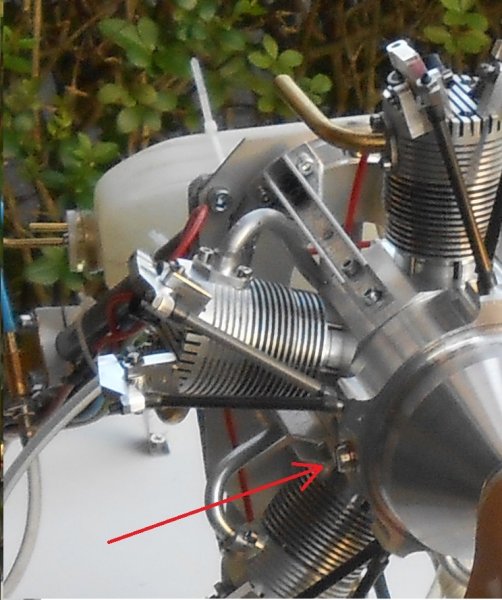 Now for the oil spill. As you can see I made the cam follower holes longer than the original design, hence the "lumps"on the outer diameter of the cam housing. This is done
a. to reduce wear from the transversal forces ( friction between camring and cam follower)
b. to reduce oil spill form the cam followers of cyl. 3 and 4 ( the lowest ones) .
Using outboard gear oil which I still had lying around ( I think viscosity about SAE70), the spill is minimal.

Next weekend I will run the engine on a modelling show, after that I plan to take it apart to assess wear after about one hour running.
So.. to be continued.

Thanks Jos, that helps clear up the Edwards. I should have realized on the parts description, it even says 'sump'. Let us know how your modifications work out.

I recently got a reply from Mr. Jung. He basically said the way I've described the fuel mist 'flow-through' lubricating both the master rod parts and continuing forward to the gear/cam parts in the nose is correct. That is why he has the cut outs in the integral front plate of the crankcase. He said he also tried an isolated oil bath chamber like the Ohrndorf but it provided no noticeable advantage over mist circulation. Phil is obviously running his 7-cyl Jung as per plans so it must work. http://philsradial.blogspot.com/

The OS instructions talk about occasional draining so the lower cylinders don't hydraulically lock standing idle, which leads me to believe there must be sufficient lubrication. Its not as sophisticated as pumped oil & scavenge but I am OK with simplicity on my first engine as long as it runs reliably. (Now I wonder how the Edwards would handle mild aerobatics where the sump could be any position other than at the bottom?)

So I already have O-ringed front plate machined as per plans. No harm in having a nice seal. It would be relatively easy to come up with a Swiss cheese hole pattern for the front plate so that intake mist can carry forward from crankcase like the Jung & OS. Then just a simple bottom drain plug to drain residual oil buildup for both nose case & crank case. I hate deviating from the plans but I just cannot contemplate a scenario where bath oil would not leak out the lifters. This week I made a little test setup with lifter & bushing. Oil doesn't run out because its a reamed hole & nice sliding fit but you can see its shiny wet. But under running conditions these will be oscillating back & forth.
Last edited: Dec 2, 2019
P

Peter Twissell said:
Hi Petertha,
While my radial is a little more involved, with feed and scavenge pumps, I have also considered some possible additions which may be useful for your engine.
Click to expand...

Peter, I would love to see some details of your pump system. Its something I haven't been paying enough attention to. Once I deviate from glow engines with oil pre-mix in methanol fuel & onto gasoline/ignition systems, then these pre-mix intake gas 'quasi-lubrication' systems are a no-go. I can visualize different ways to deliver oil, its the scavenge side I have a tougher time understanding - how it doesn't occasionally suck air with oil & balancing the oil injection rate.

Hello petertha,
I will put together some diagrams showing my system. Until then, a brief description:
My system is essentially 'dry sump', in that the oil tank is separate to the sump. The oil tank is located behind the engine and is also used as a mounting structure. In the oil tank is the feed pump, which delivers oil to the crankshaft drillings to feed the big end rolling bearings. The pump also delivers oil to all 7 rocker boxes, where it is supplied to the rocker shafts and via small diameter jets to the lower end of the valve springs, primarily for cooling of the cylinder heads. A pressure relief valve limits flow at higher engine speeds.
Oil escaping from the big end is thrown into the cylinder bores and against the undersides of pistons. From there, it splashes around the crankcase volume until it either drains through pipes to the sump, or passes through the many holes connecting to the timing chest volume.
Oil fed to the upper cylinder heads drains down the pushrod tubes to the timing chest. Oil from the lower heads drains via pipes connecting the rocker boxes to the sump.
The sump contains the scavenge pump. both pumps have a capacity of 8cc/rev. The scavenge pump return oil to the tank via a filter and a cooler.
The scavenge pump has been tested pump a mixture of air and oil at 1500 RPM continuously for 3 hours. The pump was barely perceptibly warm and upon inspection shows no significant wear.
I have also run tests with the pump connected to a test manifold, which simulates the load of 14 jets and one 4mm drilling through the crank. The manifold is also fitted with oil pressure and temperature monitors. At just 250rpm with the oil cold (it was 3.5°C on the day), the flow through the jets projects oil far enough to get to all the places it's needed, while flowing approximately 1 litre/min through the 4mm hole at less than 1 bar pressure.
Adding a series restriction showed that the flowrate remains virtually constant up to 7 Bar. Heating the oil to 90° showed no significant change in flow rate, but the oil projected considerably further from the jets. The mocked up PRV has a Ø5.5mm orifice, which needs to be larger, as it began to choke at about 1000 rpm.

Well, that didn't work - I'll go and find out how to embed images!

You can just drag-and-drop images into your post as you compose it.
P

Good tip. I usually use the Upload a File button & navigate to where pictures reside. Looks like drag & drop accomplishes the same thing if you have the folder window open.

I should have mentioned, once you drag and drop them into your post, they will appear at the bottom as in the post above ^^ but there should be buttons next to the file which you can click on to insert them into your text, either as a thumbnail or full-size.