What's that odd smell? I didn't think it was Punday night already.
D

I just got an e-mail telling me that my sheet of 1mm silicone rubber was delivered. Looks like the printers are going to be busy this weekend. The D6 will be printing replacement parts for the airlock, and the MP10 will be printing Mario. and Dreadnought Benchy's CWIS parts.
D

When I took the airlock apart, I discovered that I had apparently been a little generous on the length of the airlock shell. I had printed a couple of spacers for the airlock rotor to fill the gap. These spacers were about 1mm thick and there was one on each end of the rotor, but they only when up top the bottom of the vanes. So I effectively had a 2mm gap where air could be sucked in around the rotor. That explained why the cyclone wasn't emptying like it should have been.

With the wipers installed I can still feel a little draft going into the airlock, but not nearly as bad as it used to be. Apparently it was leaking enough air that I was getting some drop-out in the duct. I had emptied the bin under the airlock before I started taking it apart, didn't want to have to paw around in the sawdust to find a dropped M3 bolt. After I rebuild the airlock and ran the system for a few minutes, the bottom of the bin was covered with a small pile of sawdust. That sawdust must have been laying in the bottom of the duct-work, because nothing was running other than the DC fan and airlock.

About all that's left to do now is to build the final filters so that I'm returning the air to the shop as clean as I can reasonably get it.

Hmmmmm - - - trying to understand where the problem was.
You made the frame for the airlock longer than the rotor - - - yes, no, maybe?
D

Yup, the airlock frame/shell wound up a couple about 2mm longer than intended. But it was square to the world so I figured that I could re-make the vanes and add 1mm to each end. Near as I can figure, that must have still left a path for the air to get past.

When I made the silicon rubber wipers for the vanes I cut them so I had a wiper on both ends of the vane as well as along the length of it.

This is how much sawdust that had dropped out of the airflow in the main dust collector trunk-line. 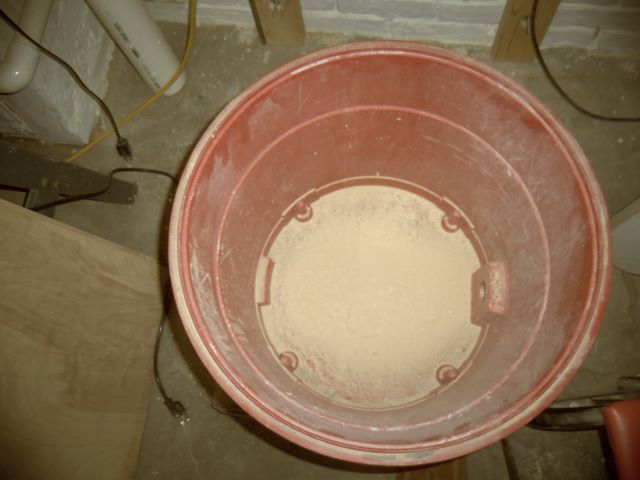 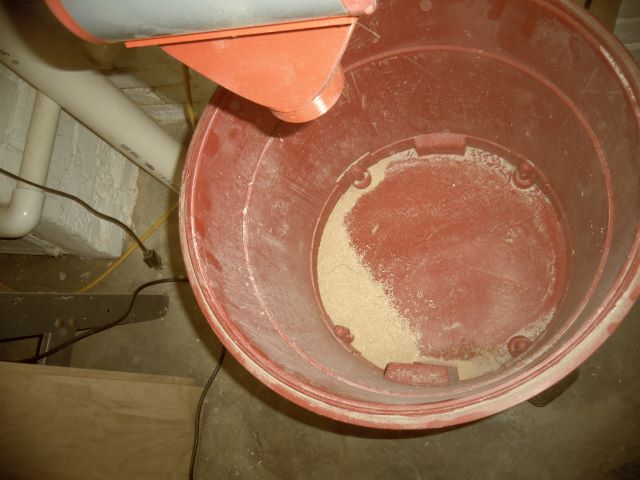 But that would have eventually built up in the duct. I may have to get out the bore-scope and look at the ducts that I can get into, now I'm curious if I still have a problem, or if I've solved it. I don't really want to, but I may have to cut an access hole into the main trunk-line so I can see if I've got dust laying in the bottom of it.

The first plant that I worked at had a poorly designed dust collection system. After the fire department had to come out and put out a smoldering fire in the duct-work another guy and I got "blessed" with the easy job of cleaning out the 24" duct where it ran across the roof, I was a few pounds lighter and a LOT more nimble then. (Confined space permit? What's that?)

Within a year, they had a repeat of this fire, only this time it blew the top off the dust collector, the top was 1/8" steel about 12' x 12' - wound up in a field about 200-300 yards away. After that the entire dust collection system was rebuilt, never had any problems after that.
D

Just about ready to stick a fork in this project and call it done.

Over the weekend I got the final filter assembly made and installed. It got a 3D printed round to rectangular adapter to adapt the 4" hose to the filter box. Not that it absolutely NEEDED the 3D printed part, but if you've got the toys you might as well use them.

Last night I printed another hose adapter. This one adapts a piece of shop vac hose to the airlock discharge. I'm using that hose to keep the dust discharged by the airlock from being blown around as it drops into the bin. When I printed the airlock discharge section I measured the ID of one of my older shop vac hoses. The hoses that I got to actually make the connections have a different ID. Not wanting to purchase another $30 eight foot long hose, just for the eight inch piece I needed, I printed another adapter and used some of the leftover hose that I already had.

I'll get a picture of the final filters and discharge extension tonight and then we'll call this job done enough - for now.

OK, the fork is stuck in, but first - Picture Time.

This is the final filter/s. 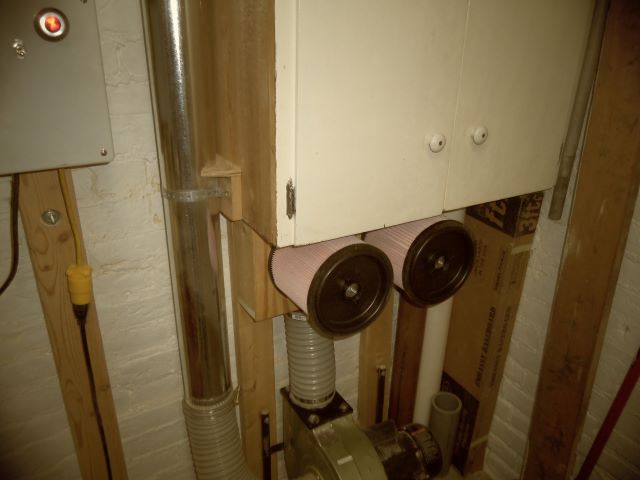 You can ALMOST see the 3D printed adapter from this angle - sorry about that. The filters are a pair of shop vac filters for fine particulate - from Menard's I think. It was one of those big box stores anyway.

This is the discharge extension. 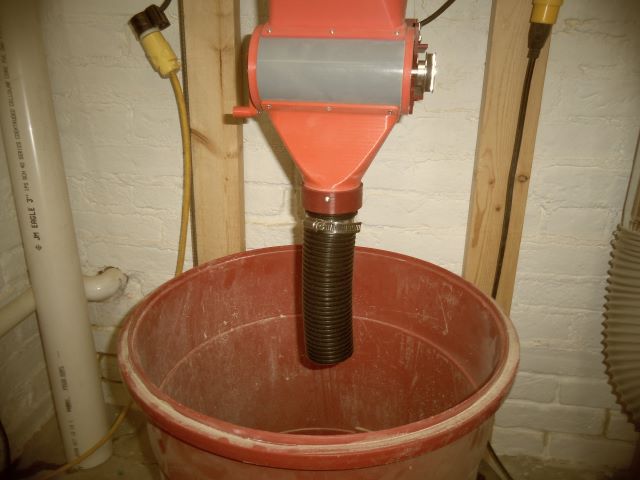 It works quite well, the crap doesn't drift around, just falls straight down into the bin. I tried sucking up the pile of sawdust in the bin and got all of it sucked up before I started getting any back. It wasn't THAT big of a pile. The airlock IS discharging while the fan is running, so the new vanes helped.

BUT the pile of sawdust that I got back wasn't quite as big. When I shut off the fan, but kept the airlock running, I got the rest of the pile. I get the bigger chunks when the fan is running, then when I turn off the fan I get the rest of it.

When/IF I build a new control panel, that will be done automatically - just like we do with the big dust collectors.

why not use a BBQ rotisserie motor to turn the rotor? cheap, modest RPM, 100% duty cycle
D

When I first designed the DC airlock, it was designed around bit and pieces that I had on hand. i.e.... 8mm skateboard bearings, 5/16" shaft, 20RPM 12VDC gearmotor, and parts that I could 3D print.

A BBQ rotisserie may have worked, but I didn't have one. The square BBQ spit would have been a more positive drive for the rotor than what I finally came up with. But then fitting the square spit to the round bearings and getting a fairly air-tight seal would have been a problem.

Don
You must log in or register to reply here.