I also updated my web page with this information:

Long story short: My initial test was successful. It's too early to say how this will work long term, but I am quite happy with my first test. If anyone else has tried something like this, I'll be interested to hear about your experience. 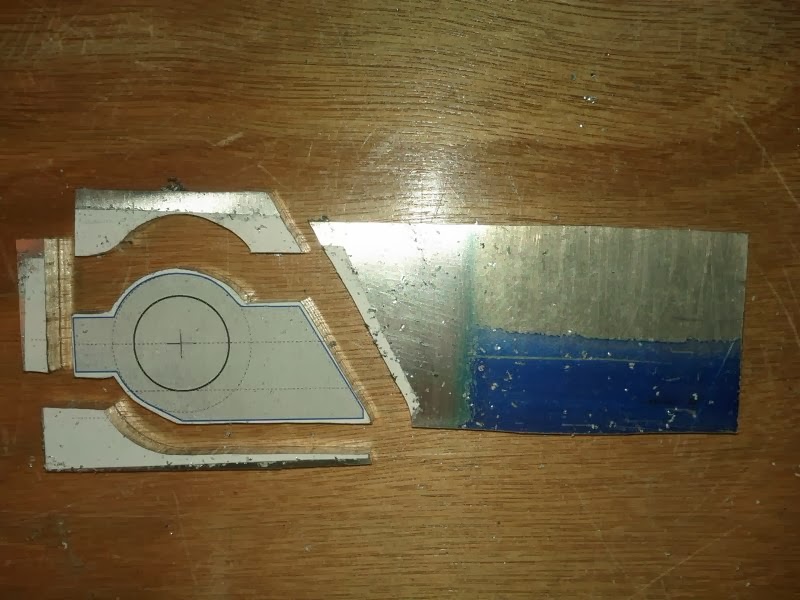 Wood workers do this all the time. Blade life may be shorter in the long term with less blade to conduct heat away from teeth.

kquiggle, I too, have one of those HF portable power bandsaws, and I love it. With a decent blade installed, it just keeps on cutting. Here is a box of 8-5/8" steel rings that I cut at one setting with that saw. I had to keep rotating them around and reclamping. But using plenty of oil, all went well. and those rings are now the flywheel in my avatar.

Your horizontal cut-off set-up looks fantastic. I am sure I won't be the first guy that has copied you on that rig.
Lloyd 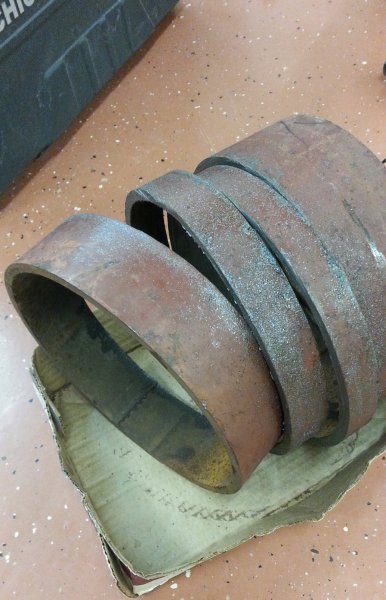 Lloyd - nice job on the flywheel. My HF bandsaw is still going strong - just used it the other day to cut some 1" thick aluminum plate. HF is now selling metal cutting bandsaw blades of reasonable quality.

My overall impression of HF is that there has been a general (but uneven) increase in quality. Some items that look the same have improved internally, so it may be that the bandsaw they are selling now is better than the one I bought some time ago. On the other hand, you can still buy some genuine junk at HF so caveat emptor*!

I am also of the firmly held belief (with no proof whatsoever) that many low priced goods found on ebay, HF, etc. are made with little or no quality control (except on the part of the buyer), so that sometimes you buy an item that gets good reviews and it falls apart on first use - you just lost the lottery.

I agree with you on the budget tools. Buyer beware is right, and you need to have realistic expectations. That $110HF portable hack/band saw is not a $450 Milwaukee, but it comes surprisingly close. Is the Milwaukee worth $340 more? Not to me. But if I used it everyday on the job, then maybe it would be. The HF predator engines, $99 for a 6HP engine? I have 2 and love them. And their mini tire changer; another thing I should have bought 20 years ago. But I digress. I will make the stand/base like you did for the saw and not have to kick myself 3 years from now for not doing it, LOL.
K

I count the HF bandsaw and the stand I made for it as one of the most used tools in my shop, and it was well worth the time I took to make it. And it really didn;t take all that long.

Some additional thoughts: When I first made the stand, I wanted to do it such a way that I could put the bandsaw back into it's original condition if it turned out I didn't like the stand. However, since I made it I have never considered going back. I mention this because I made some design choices that probably made the build a bit harder than it needed to be. Off the top of my head, instead of making a replacement blade cover, I would just modify the original blade cover.

I'd probably also simplify the table mounting a bit by drilling and tapping some holes in the bandsaw itself. Although having said that, I will also say that I have never had any problems with using the table, which has proven to be quite stable.

Finally, it's worth taking some time to get the saw blade aligned as much as possible - the straighter the cut, the less waste and cleanup later.

Do you still use the saw in both horizontal and vertical arrangements, or does one take care of the bulk of the tasks?
Thanks
K

I find myself going back and forth between the two quite often. Somewhere along the way I misplaced [Dropped it on the floor and can't find it. It will turn up some day.] one of the two screws that hold the table in place, but I found that one screw works just fine. Another design change I would consider is a way to lock/unlock the table in place more quickly since I do it fairly often, but so far it has not been annoying enough for me to make a change; I just keep an allen wrench with the saw, and changeover takes less than a minute.

As you might expect, both configurations have their benefits, so it's very useful to be able to switch between them. I would add that I have never found it necessary to lock the bandsaw in the upright position in any way; the cutting forces hold it upright automatically.

Generally speaking, I cut rods and bars in the horizontal position, and flat pieces in the vertical (table) position. With good lighting and a bit of care, I find I can make fairly accurate cuts on the table which is very beneficial in terms of reducing waste and the the time required for final dimensioning. Before I got the bandsaw I was using a hacksaw and cutting intentionally oversize to allow for any error; then I would have to mill or turn off the oversize portion which is some cases was probably more than it needed to be. I still cut oversize of course, but much less than with hacksaw cutting.

Thanks very much for all the tips and thoughts. I'll ponder this a few days and see how the design evolves before I start building. My best results happen when I get neither impatient nor greedy. LOL. Hard to do sometimes.
K

In case you didn't already see it, you can find a list of links to other bandsaw stands at the link below - lots of good ideas out there:

Here’s another option for the HF bandsaw but with a yellow saw. I have the base clamped to my bench and the larger surface is good for cutting larger stock. I added a foot switch both for safety and convenience. I’ve gone through several blades. The Starretts were problematic breaking at the weld. The Lennox blades at Lowe’s work well for like 20 bucks for three. I’ve made a gazillion cuts with this rig and don't know why I did or sooner. Replaced the M6-1.0 Phillips head screws for the shoe with Allen head countersunk screws. It took an afternoon to make from scrap odds and ends.

Looks like a good solid build; the foot switch is a nice idea. I've had good luck with the Lenox blades also. I don't know if Lowes carries them, but the Lenox Diemaster variable pitch blades are nice - the variable pitch let's you cur a larger range of materials.