Hi all ,sorry if this is in the wrong place,can anybody help with some plans to make a model civil war parrott rifle an lumber please,did find a set on the net ,but they do not send to the uk,so was hoping a member had anything on there computor that could be mailed.
wes

Will they not send because of firearm laws in the UK?
W

No steve they just do not send to the uk ,just in the usa ,and yes am aware of our laws and it will not be a firing model ,just a small model.

That's a shame. I send spark plugs and boots to anybody that wants one. I have sent to the UK with no trouble. Filling out a customs form isn't a big deal. I don't understand why not. Best of luck on your search.
W

Thanks steve very kind of you ,if l have no luck ,back up plan would look at some photos and take my time and build from them.

Take a look at this link and perhaps you can derive some useful info there.

Many thanks to you almega ,am now sorted along with my pictures can work ok,just getting bits ready for the long winter.

Good luck. Once begun, post your progress for the curious.

wesley said:
Thanks steve very kind of you ,if l have no luck ,back up plan would look at some photos and take my time and build from them.
Click to expand...

There is an actual Parrot gun with limber on display in my town. Not convenient because it is up on a raised mound of earth, but if all your other plans fall through I can ask the town mayor for permission to take photos with measurements.

PM me and let me know how your search goes.

Is the link to "vintage model plans" almega posted above the site that won't ship to the UK?
It says they ship internationally for "a small charge" maybe it's worth checking with them if you like the plans.
C

Take a look at this link and perhaps you can derive some useful info there.
Click to expand...

When I was a kid, my dad subscribed to Popular Science, or Popular Mecahnics, or something similar, I can't remember which. Sometime in the early 60s, they published an article on making a model of a Civil War cannon. Being very interested in the Civil War at the time, I remember really wanting to make the model but didn't have the resources or talent to do so. This article that almega posted looks very similar to what I remember about what was in the magazine I read back then. Does anyone know if this article and plans were ever published in a magazine? I see that the website states "Vintage Plans from 1960".
D

I made these. There is a Parrot in the back ground. The shell is a 20mm for reference.
I haven't tried firing them . Bores are 3/8". The one on the right is a breech loader 16th century. 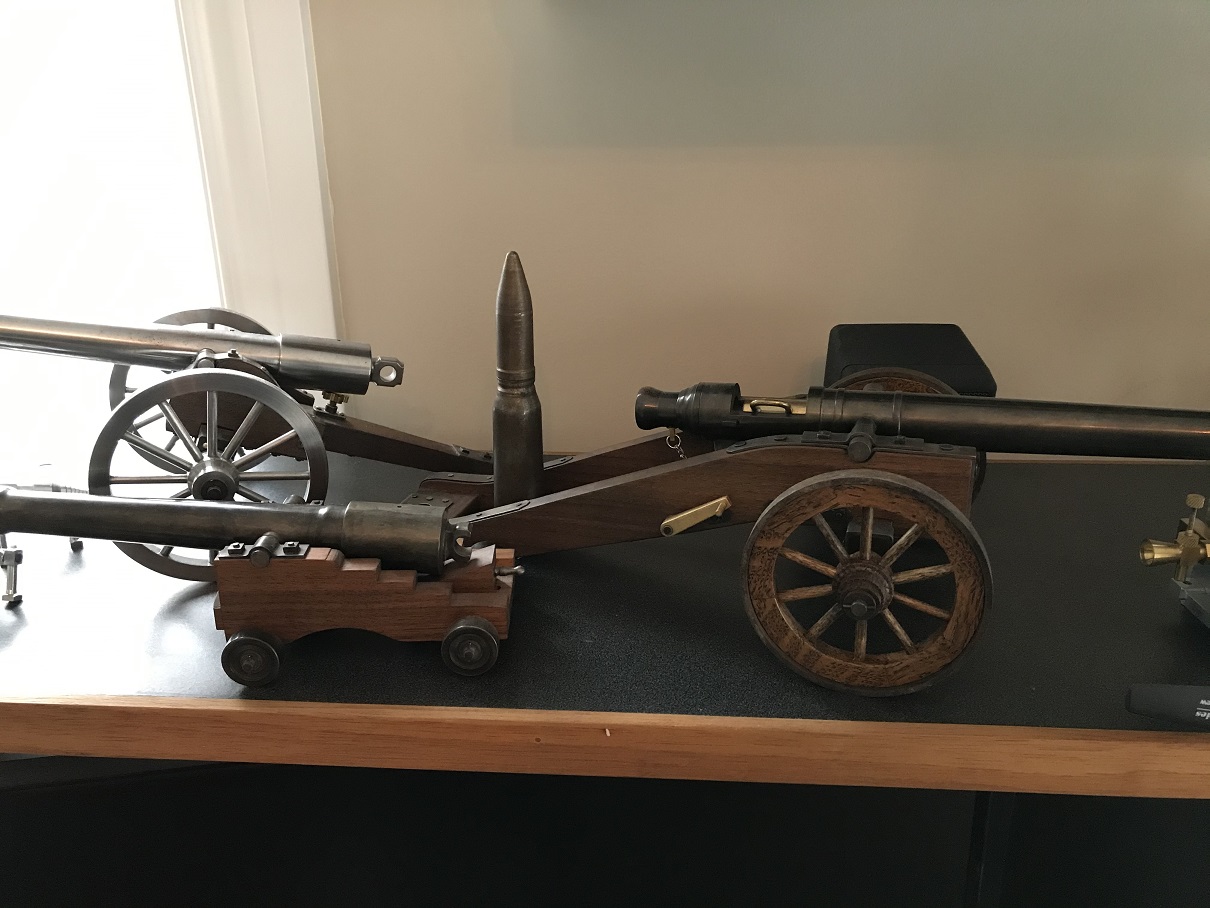 If you are looking for very detailed drawings, Antique Ordnance Publishers (AOP) has large (11" x 17") format drawing sets for many U.S. Civil War artillery pieces, limbers, and related stuff. I used these to make or repair bits and pieces for a friends cannons used in re-enacting.

Probably quite expensive to get mailed.

Field Artillery Weapons of the Civil War by Hazlett, Olmstead, and Parks has a chapter on Parrott Rifles, with some dimensions and photos.

It's worth understanding that the US Civil War involved a long protracted conflict with lots of supply issues. Most models are reasonably accurate generic representations of a specific style weapon, as the barrel dimensions are fairly consistent and the carriage designs were as well. Over time however, you could find all sorts of combinations as barrels failed, carriages were damaged, and weapons were lost when positions were over run. If you are seeking historical "accuracy" the best you can do is either build from original government specifications and prints so your model in as new and delivered condition (kind of ignoring supply issues and contract mods), or you model a specific example at a specific location matching things up to photographs or AOP drawing made from original data and a specific example.

I've heard purists bemoaning the fact that the National Parks in the US have barrels on the wrong carriages, wheels are the wrong diameter for that carriage, this detail or that detail is "wrong", all the rest of that. In some cases it's that bits and pieces were thrown together well enough to fill out a line of guns when the park was built. In other cases it's likely bits and pieces were throw together by soldiers to keep as much firepower available as possible, without caring if the rope on the trail was three or four strand.

Oh thanks stan great info ,will be happy just making the model that looks like it should be within reason,if you get what l mean,but a very good bit of information in your post,people on here are most kind thanks.

doozer said:
I made these. There is a Parrot in the back ground. The shell is a 20mm for reference.
I haven't tried firing them . Bores are 3/8". The one on the right is a breech loader 16th century.

Is that a representation of a naval parrot gun in the front?