ShopShoe what did you use for a search subject to get info on the switch issues?

I read a bunch as well and came across this one.
[email protected] | Yet another V10P switch replacement
He mentions the name of an album he posted to the site that I cannot see ( not a member )
I searched "V10 switch replacement"

I started registration and I am waiting for them to let me in and I will contact you person you reference Scott.

In the meantime, I did receive my schematic so here (the double images are my fault) it is: 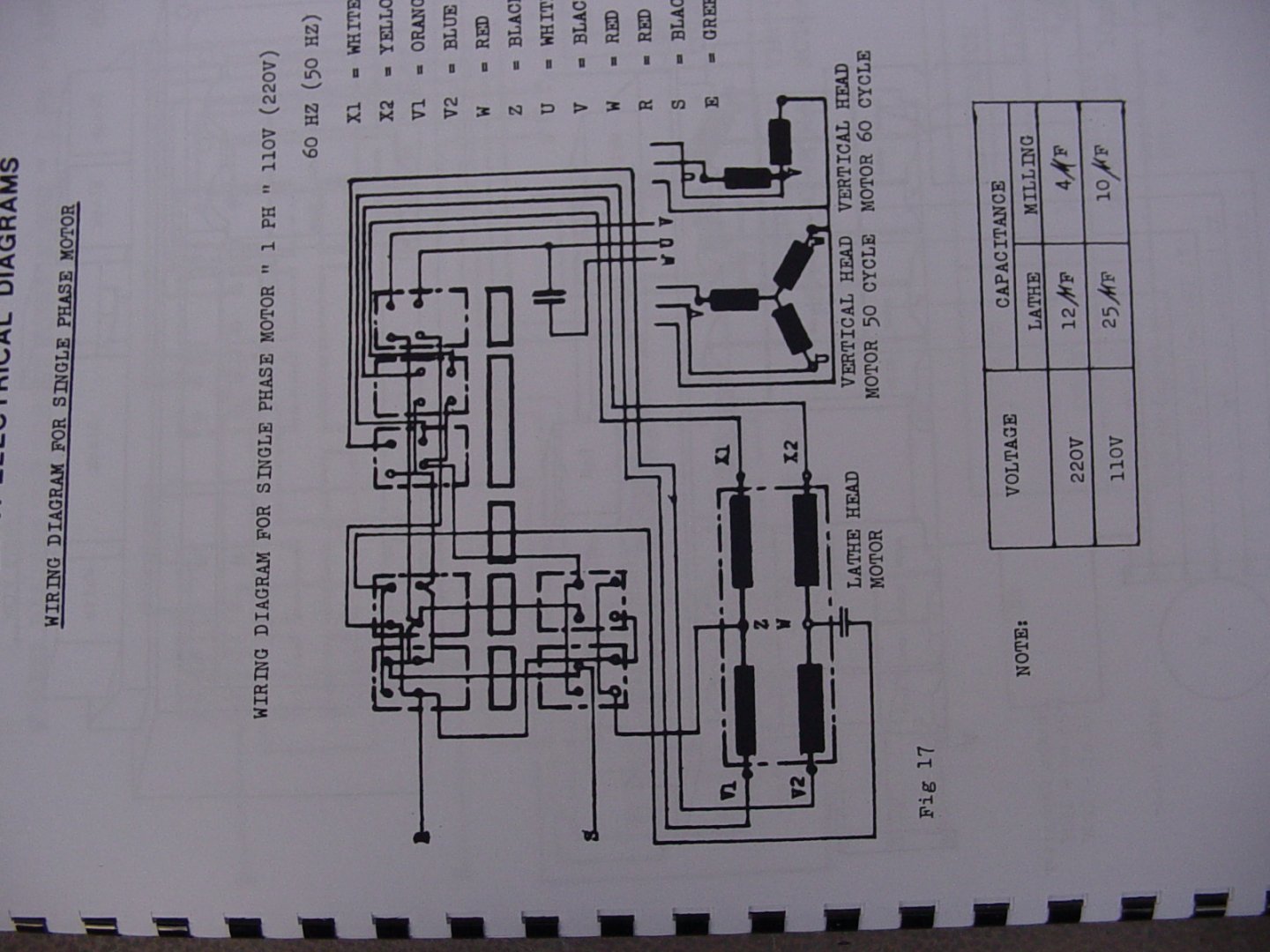 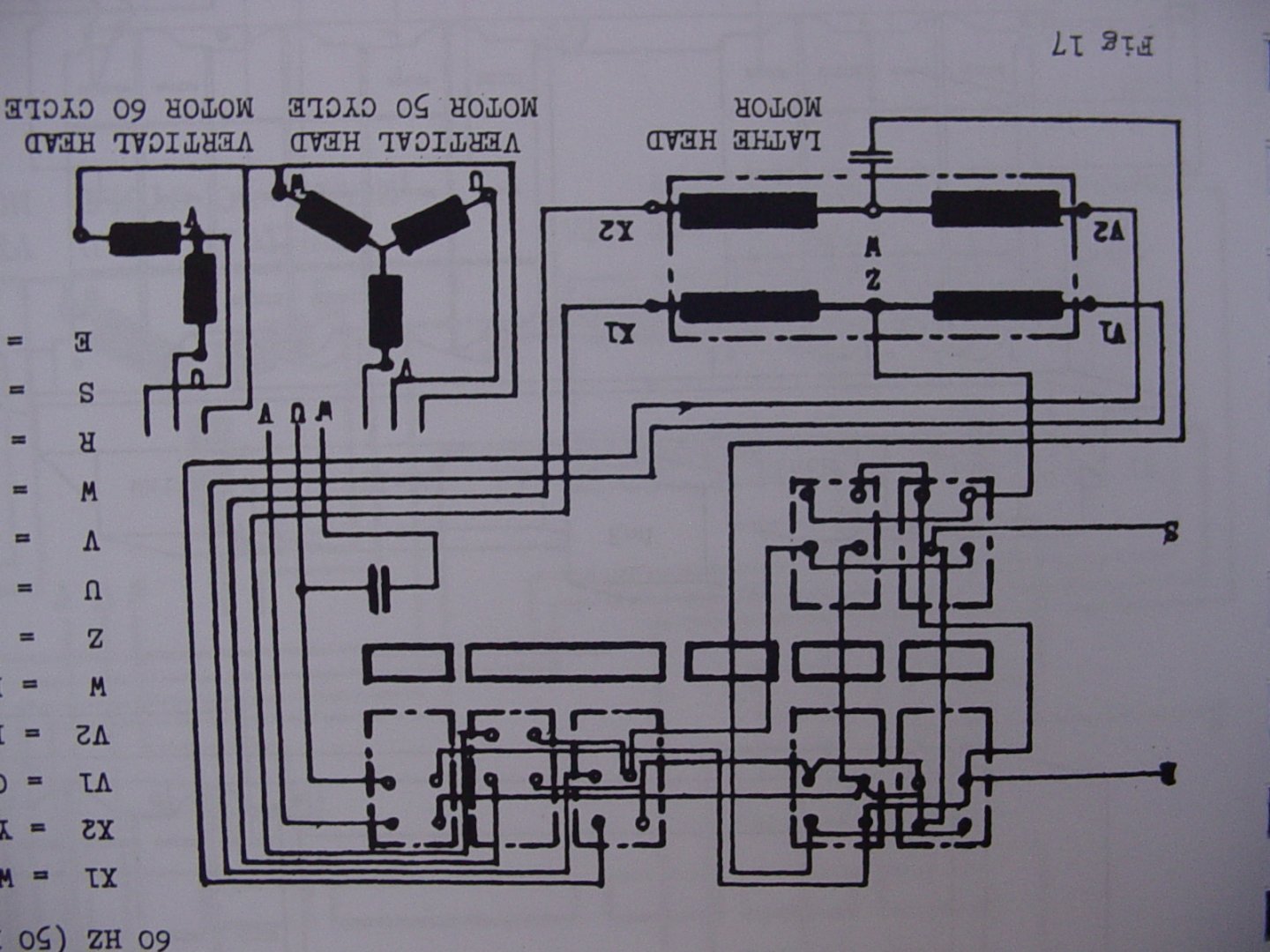 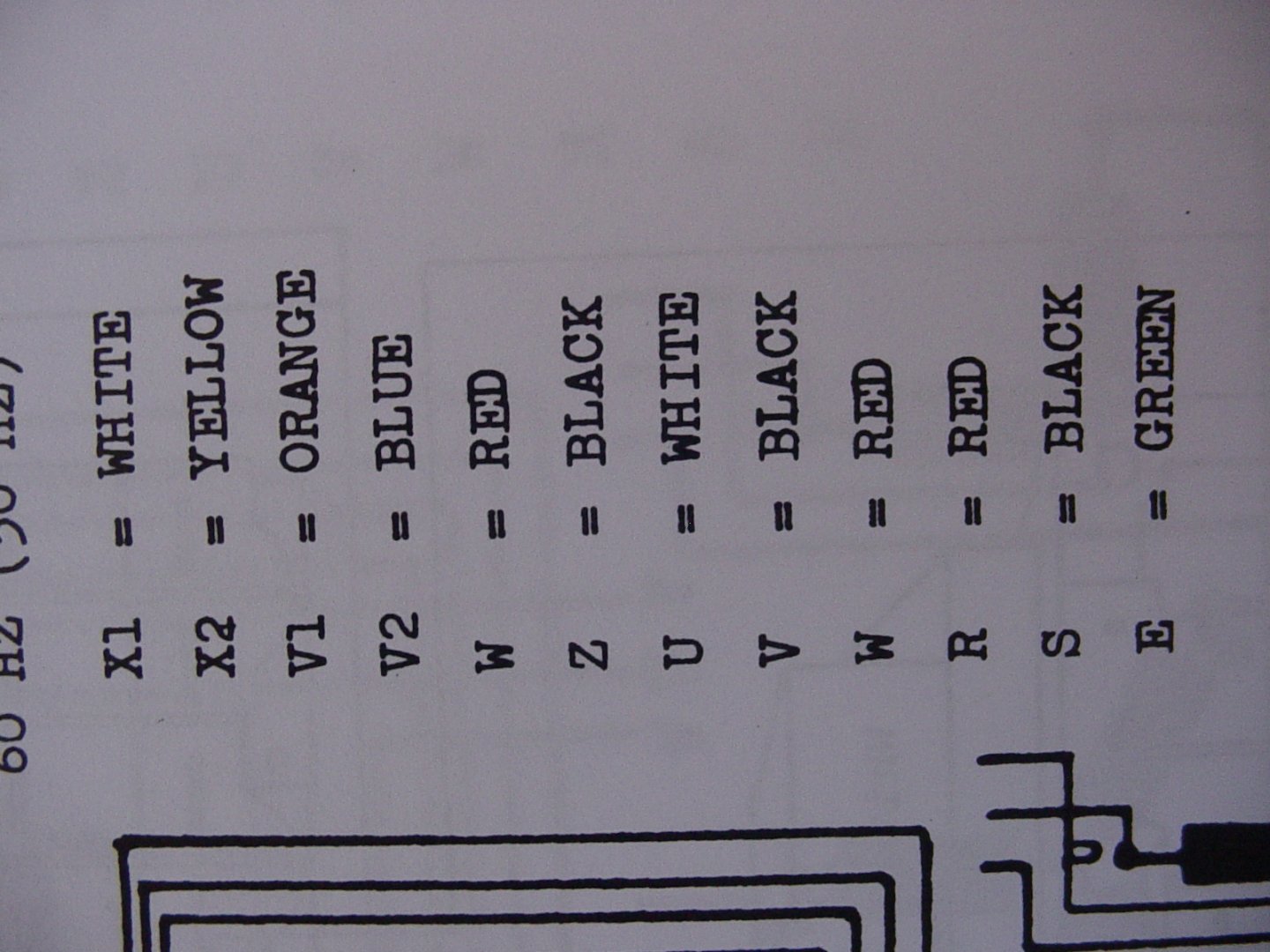 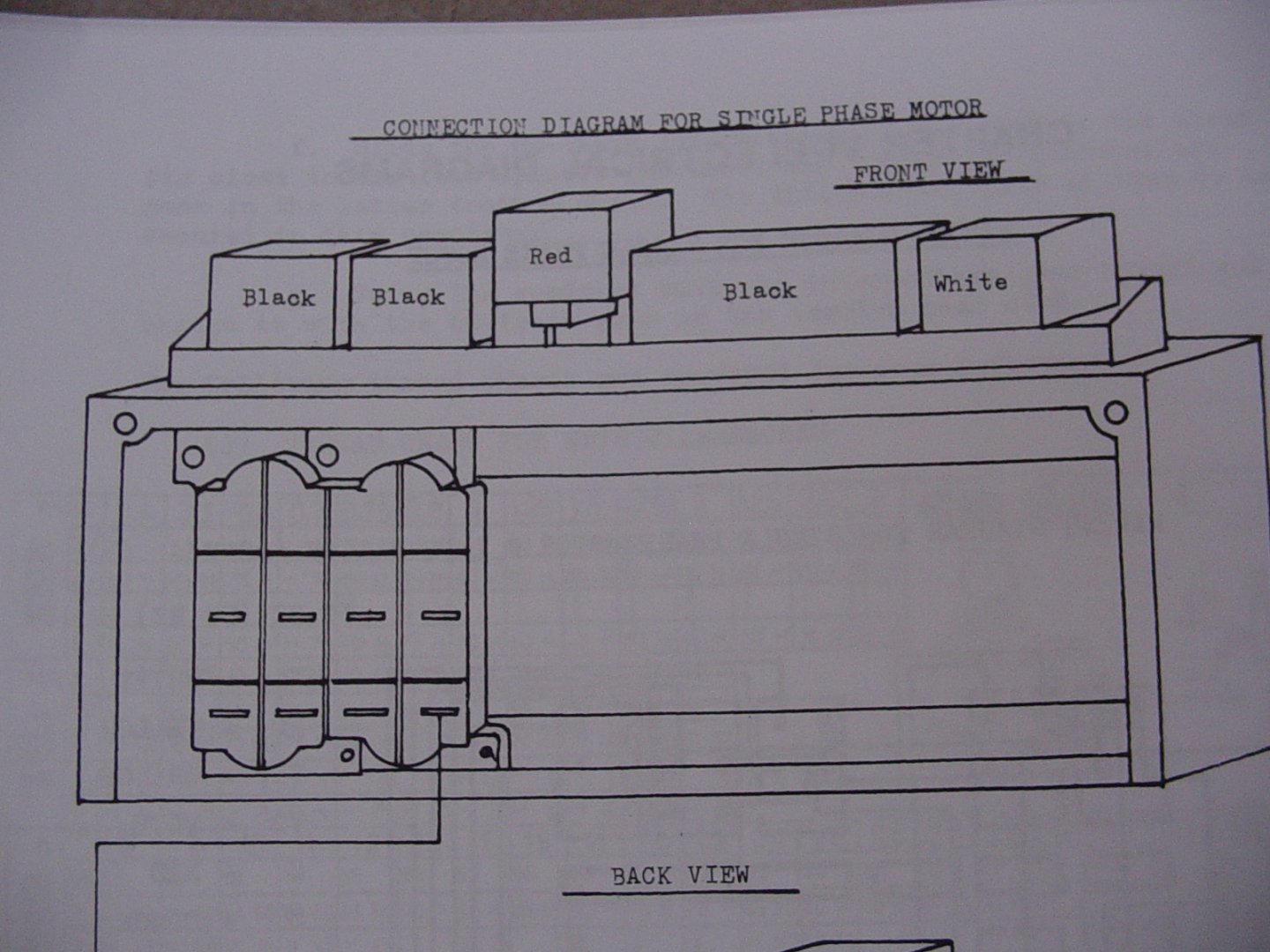 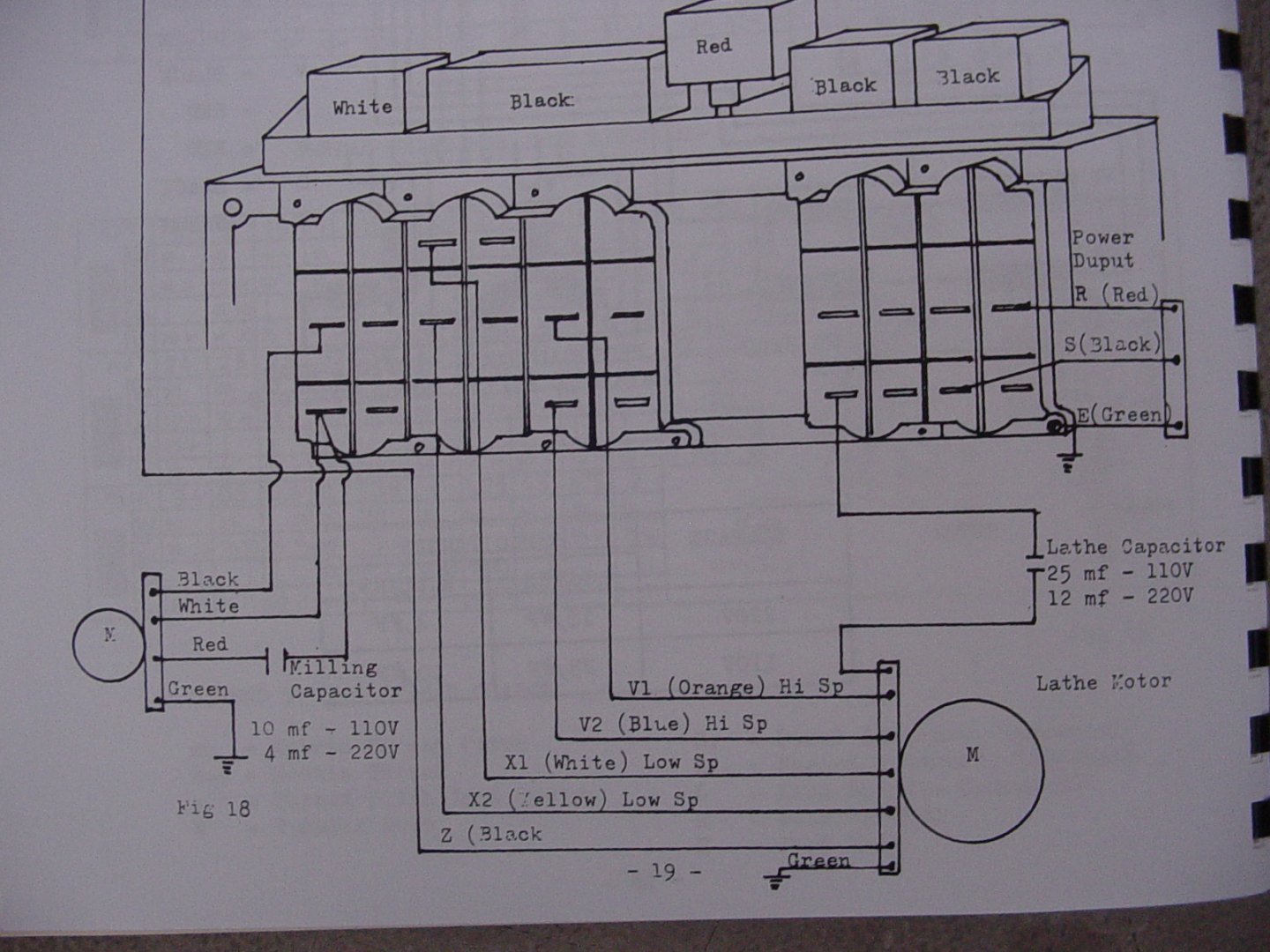 Scott,
That is good for an OEM switch, what you need and won't get is the internal connections(jumpers) in the switch, many have several connections on each button.
Cheers
Andrew
Y

The manual which may not be my exact model since a very similar lathe/mill was made in Taiwan and sold by Jet (what I have), Emco, and Grizzley. The manual shows one button activating two switches for high speed operation. I am missing all but two buttons, but if you try to push the two high speed switches they will not budge. If you try to push them separately they will not budge. The only way they will move and engage is if you press the low speed and high speed (in the direction desired) together, but the lathe still goes at low speed, and unfortunately I have seen smoke exit the motor/switch area so I immediately quit that. I'm wondering if my motor has lost its high speed capacity. I understand the mill switch not engaging (being a mechanical problem), but I do not understand the high speed switches not budging.
K

Just to let you know I'm still checking in: I just used the link as provided by karlw144 and started browsing the titles and clicking on likely ones. The more on-topic posts are many pages back in the list of titles.

I'm glad to see you got schematics and other information that can help at this point. I echo what ghosty says above. Internal connections inside the switch, etc. are not shown. Nonetheless, I think there is enough there to figure out what it is supposed to do as shipped.

It would interest me if you could make a copy of the pictorial of the switch (front view) from page 19 and indicate what the labels on the machine say the buttons do. Some is apparent from the connections, and some can be figured out, but it would help to know how the designers were thinking when they chose this panel layout. 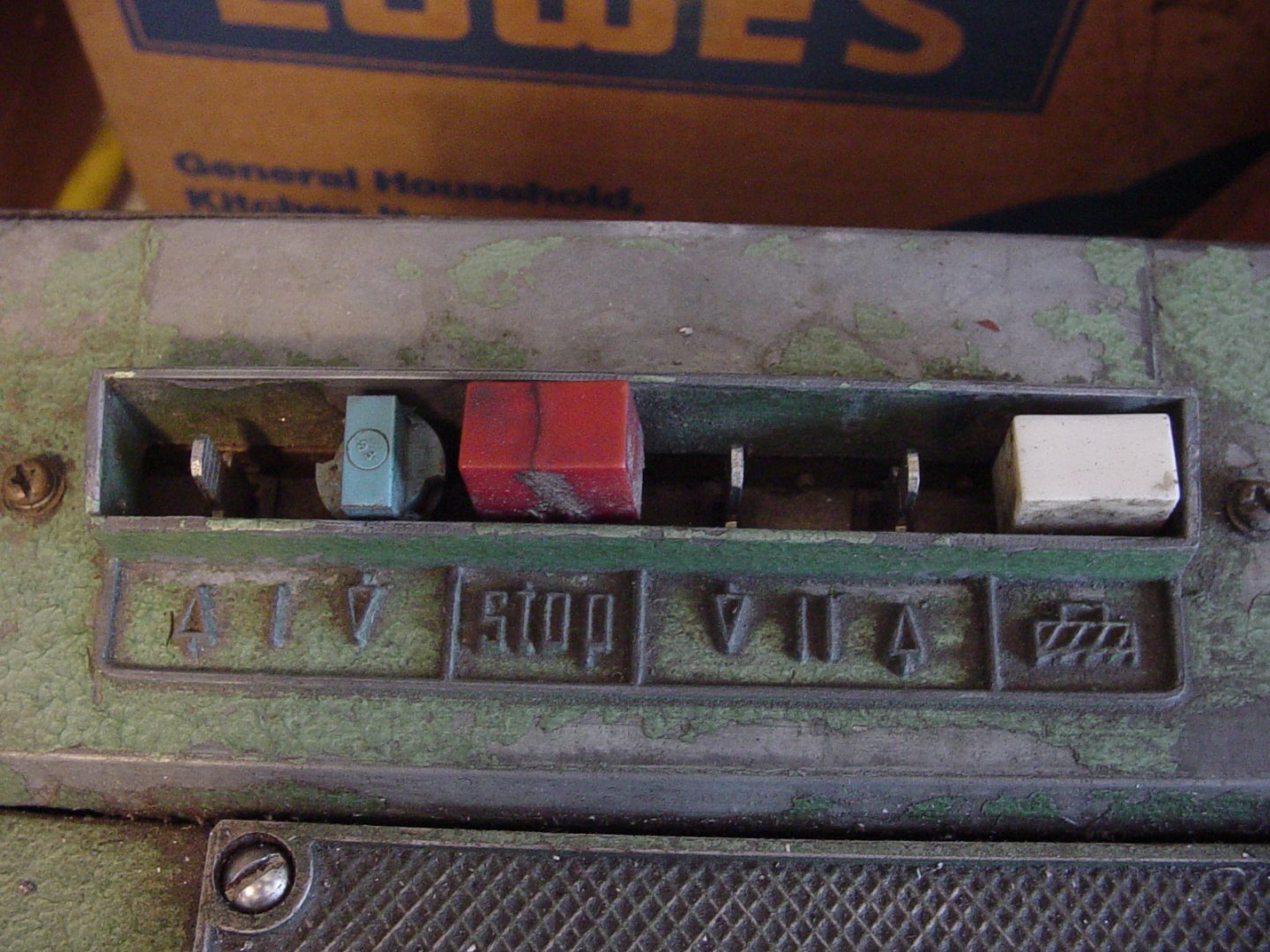 Although we have been focusing on the switch, it sounds like the motor needs to be checked out. I don't have much experience with these types of motors as I've been lucky to never come up against a bad one. (I'm speaking of the lathe two-speed motor here.)

Can someone suggest a power-off troubleshooting procedure the OP can use (and so that I can learn about it, too.)

I'm basing this on the Never ASS.U.ME. rule

I would love to know of such a test. I have never had use of high speed since I have had the machine (10 years). I wasn't sure how to activate it and just got along without it.

ShopShoe said:
Can someone suggest a power-off troubleshooting procedure the OP can use (and so that I can learn about it, too.)
Click to expand...

If all that checks out you might want to check the impedance but that will require a Variac (variable AC power supply) although any fixed transformer of about one fifth of the line voltage like 20V with sufficient amps can also be used.

Connect the supply to each coil like V1-Z and turn up the voltage until you reach the indicated plate (6A) current (the motor will hum but won't turn).
What is the voltage reading at this current (probably about 20V)
Note: It will start to warm up and eventually get way too hot as there is no cooling fan - but for a short time this is no problem.
Repeat briefly for all four coils V1-Z, Z-X1, V2-W & W-X2
Are they all the same ? or are there two identical pairs - if so identify the impedance of each coil by dividing the applied voltage by the resultant current.
Example 20.3V / 6A = 3.383 Ohms

Note: Resistance will be very low - like 0.3 Ohms, impedance is its resistance to an AC voltage.

( If you don't have access to a Variac you can apply the line voltage of 110V briefly but it will overheat very rapidly and the current will be maybe five to ten time higher than nameplate because you are testing an effectively "stalled" motor. But for a brief test it's do-able. )

Using the Variac will identify if there is an inter-coil short - even a single shorted turn will massively influence the impedance - also that coil will overheat much quicker than the no-fault coils - smoke might even come out rather rapidly.
I don't expect to find this because such a fault would heat up in a running motor even if that coil was inactive.

Thank You for posting,

O.K. this post is going to get a bit technical (and hopefully no mistakes)

Firstly this is how a single phase 2 pole motor operates :- 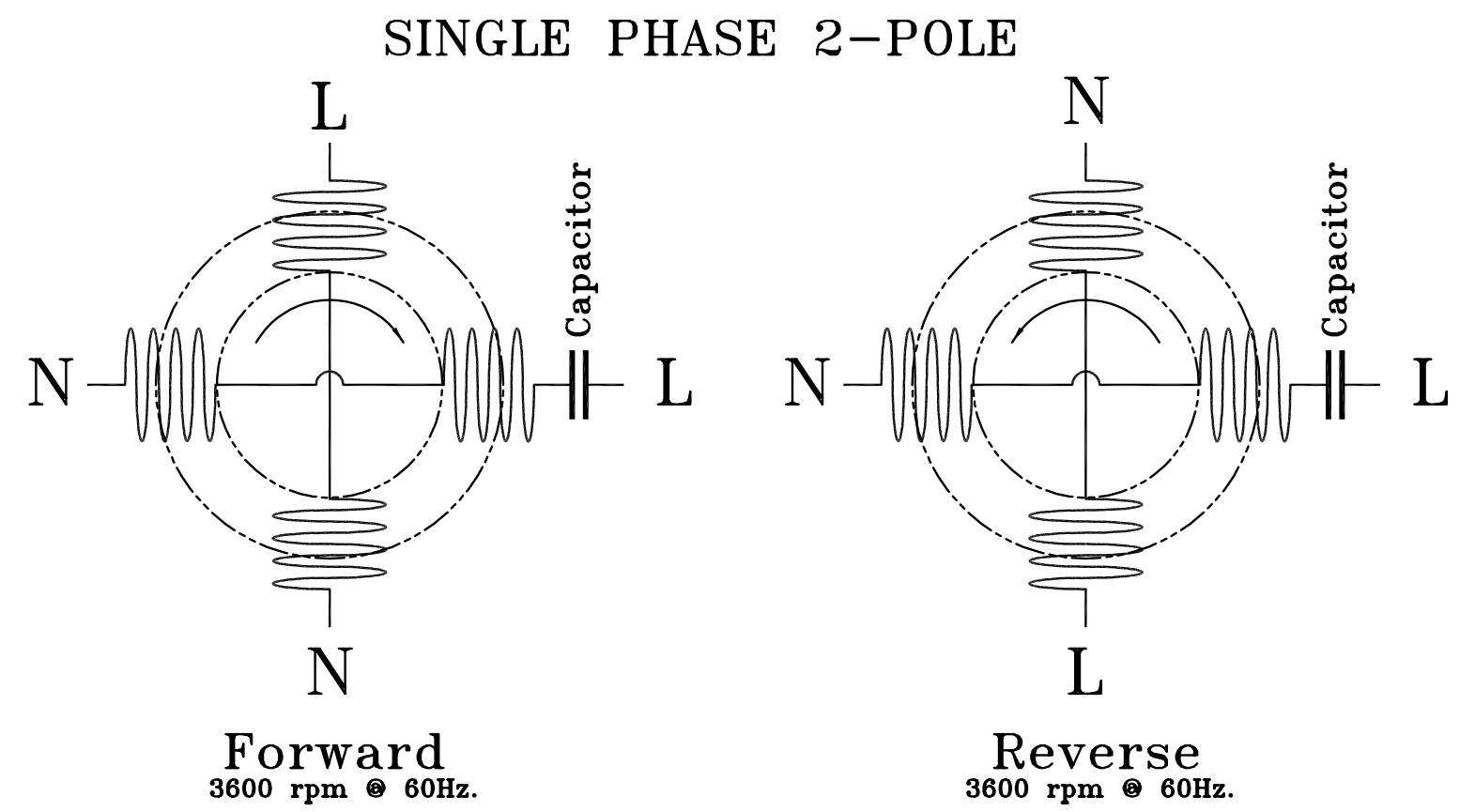 Each pole consists of a pair of opposing coils, one pole pair is the "running wind" and the other pole pair the "starting wind".
The running wind is connected to power directly but the starting wind is connected via a capacitor.
The capacitor causes a 90° electrical shift in the A.C. waveform = so from the diagram above (top left) the start winding will reach max current 90° after the run winding causing the magnetic field vector between the two sets of coils to rotate - thus dragging the rotor around with it.

The terms L & N are nominally "Live" and "Neutral"

(At this point we are ignoring such things as a booster cap or centrifugal cut out switch as these are not present in
Yellow-cad's machine - I'm also stating rpm's without "slip".)

Next a four pole motor :- 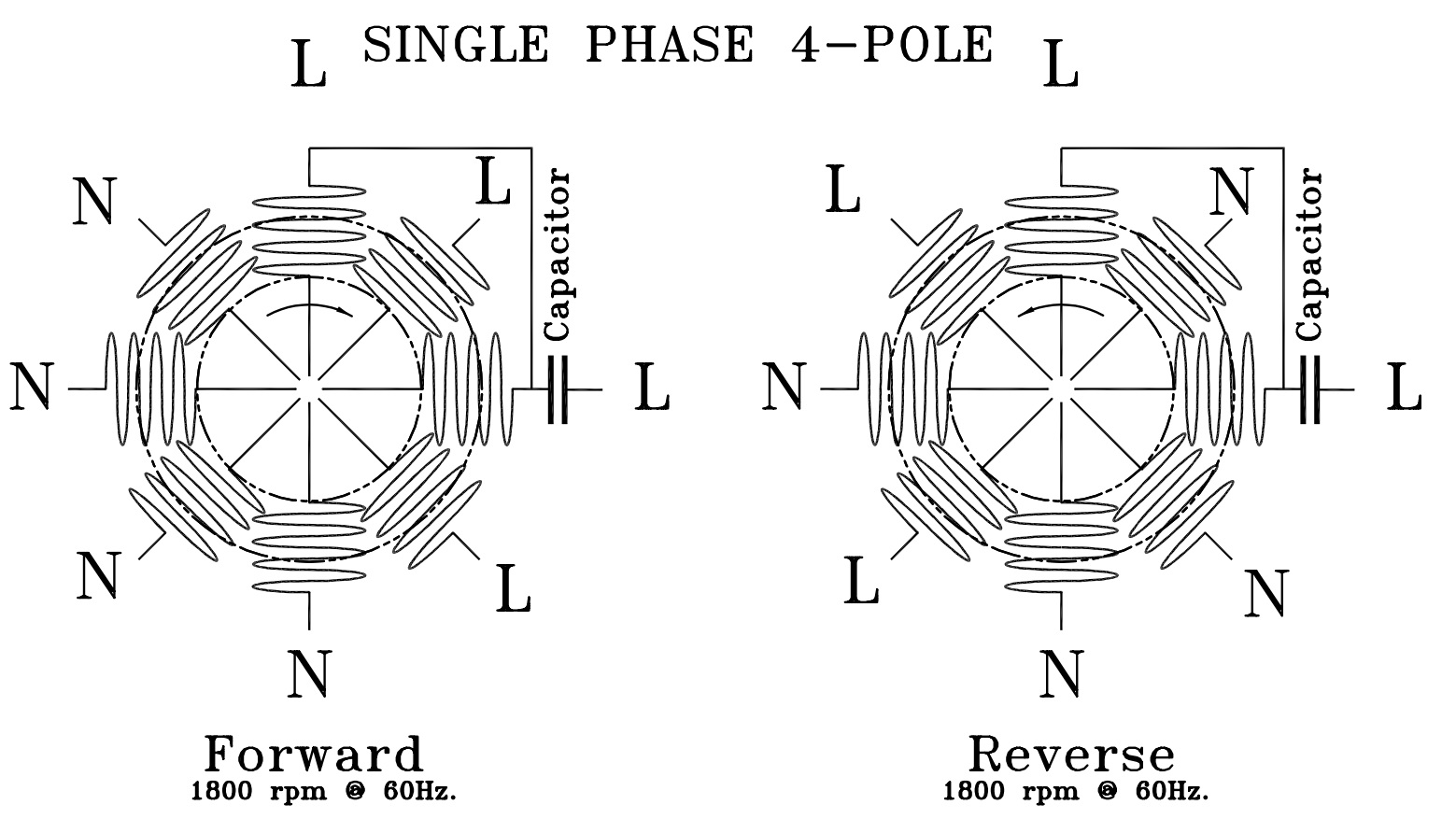 This is effectively double what was described above.
So there are two run and two start windings since this now requires 2 electrical cycles to vector a single revolution, this motor will now only turn at half synchronous speed i.e. 1800rpm for 60Hz.

By bringing most of the coil terminals out of the motor we can arrange switchgear to "wire it up" as a 2 or a 4 pole motor by connecting adjacent coil pairs in parallel or series thus making them vector as singles to change the 4 pole wind to an effective 2 poles in operation - hey presto a dual speed motor.

Now we come to Yellow-cad's motor and what I infer from the plate (there are other possibilities) but the manufacturers have indulged in some creative license here.

This is effectively what was described above but I have added in what I can infer from Yellow-cad's motor plate by adding in the terminal numbers.

There is no way to actually "rewire" this via switchgear to a 2 pole configuration - hence my comment on "creative license".

What I think they do is this :-

They turn off one of the start windings (0)

This may also require (or recommended) that you start the motor in "low" (ie 4 pole) range and switch to "high" (pseudo 2 pole configuration) as the starting torque might otherwise be rather poor.

So you need to create a series of switches / relays / contactors to develop the switching as shown.

Before doing that try setting up the various circuit configuration using jumper leads - use a heavy electrical heater (say 1.5kW) as a ballast in case of accidental shorts to minimize the scope of sparks and smoke.

Anyone got any other suggestions ?

You might consider rewinding your motor to three phase and run it off an inverter - you can get more power and much more speed range with full variability. Might be less hassle.

See my thread on uprating my lathe :-

Well, I tried my machine by pressing the low speed forward button and with lathe at speed, I pressed the two high speed switches down as one and the spindle speed actually slowed down slightly instead of increasing any speed at all. Does this indicate that my high speed winding may be shot?

Here's a diagram off the internet showing how you "rewire" a 4 pole to a 2 pole properly. 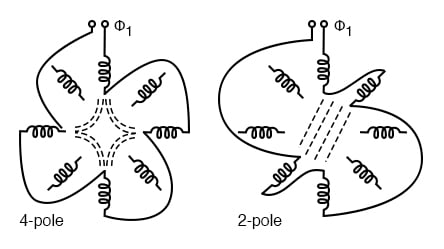 As you can see it involves bringing out all the winding ends and requires much more complicated switching to do it properly - hence my comment on the "creative" solution on your machine.

This is showing only the "run" winding - the same connections have to be done for the "start" windings - shown unconnected above for simplicity / clarity.

It also shows only series connections - parallel is also possible.

There is no high speed winding as such, its just a different configuration of the windings by switching - so if it runs fine in low speed it should also work in high. However you could have one inoperative start winding which I'll explain later.

I would presume you press start forward or start reverse - once up to speed you press high.

From your photo and diagram - a single black button (missing) seems to be to operate both switches simultaneously. However the design of the switch suggests that for some other use independent buttons might be used.

I would expect the two "start" switches to be mechanically interlocked so you can't press both at once (that would short out the mains and go bang!).

I would presume that if you hit "stop", the "high" function disengages (relay or latch) to prevent you starting in "high" thus forcing you to start in low and then select high. Selecting high too soon (or instantly) would lead to a very poor start (if at all) and likely an overload trip.

Can you get high reverse - but not high forward ? (or vice-versa) if so - given my earlier musings - you could have an open circuit start winding or a break in that wiring / switch.

Other than that its got to be a switching problem.

Work your way through all the motor diagnostics in my earlier post - you can skip the Variac impedance testing as that is unlikely - smoke would have come out already.

Then go through the switch and check that each switch opens and closes as it should.

If you can sort it all out maybe you just need to make yourself a new set of buttons.

Ken I said:
if it runs fine in low speed it should also work in high. However you could have one inoperative start winding which I'll explain later.
Click to expand...

That's not strictly true - you could have one of the run windings open circuit (or disconnected / switch problem) and it will start and run in low speed (4 pole mode) - effectively limping along but it will run !

However when you go into 2 pole mode with one of the run poles missing it will slowly stall itself to a halt - or run slower and get very hot very quickly.

Check out the coil continuity at the motor terminals with all wiring removed (take a picture for reassembly).