This is not an RC plane. I believe you start the engine and let it go.
I'm not sure what type of fuel it takes but the prop turns freely.
The wing is held to fuselage by an elastic band, which has snapped.
Offers 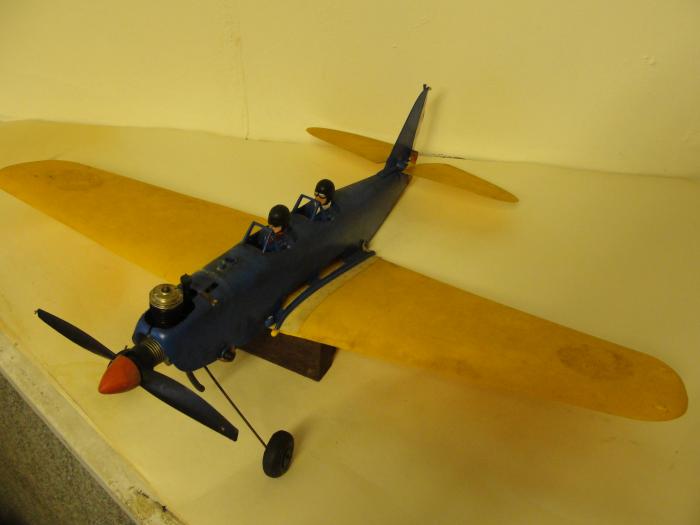 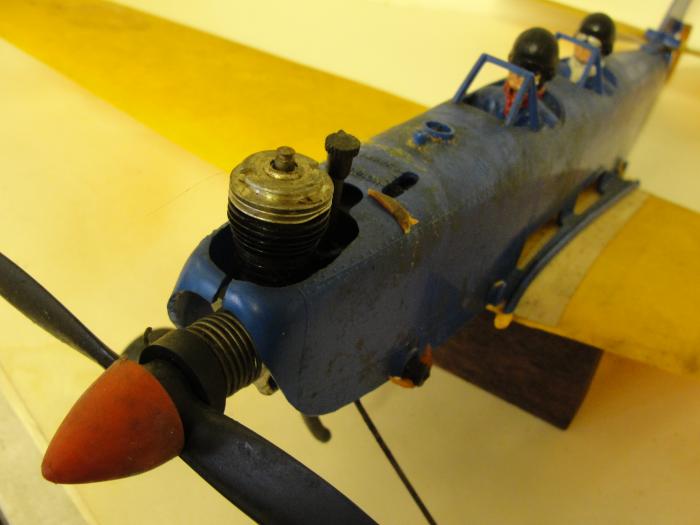 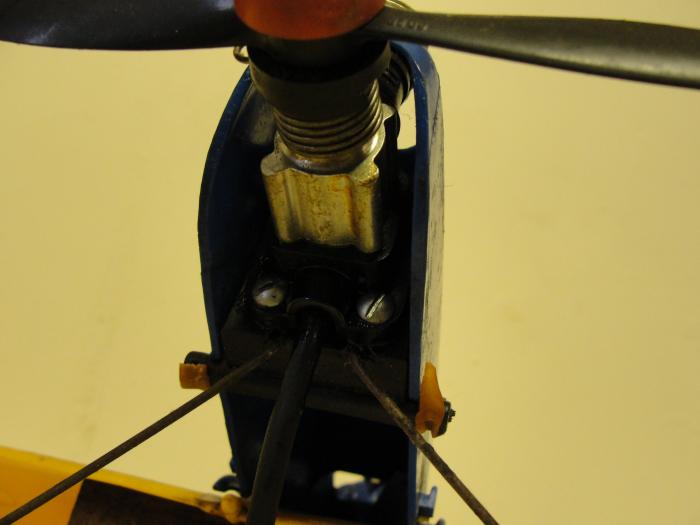 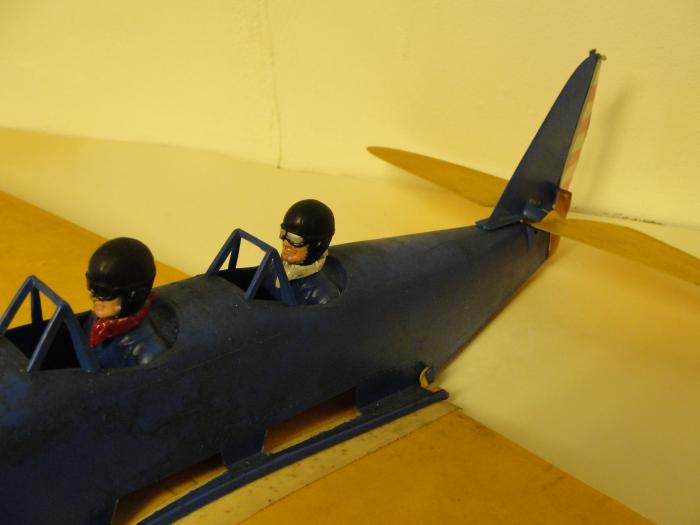 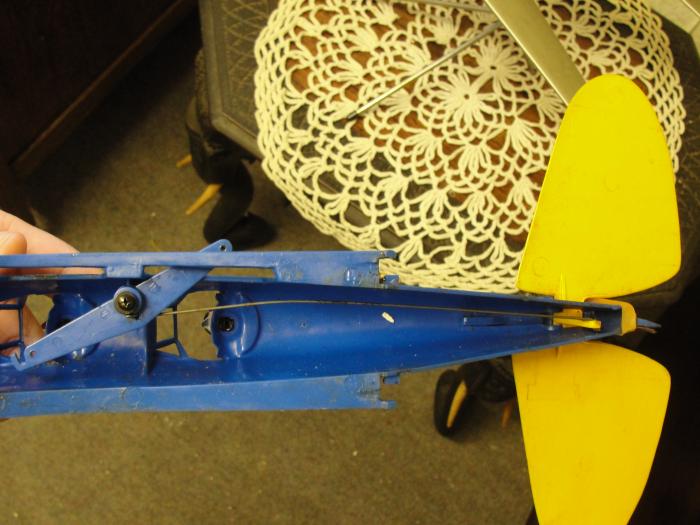 Your plane is what is known a line controlled. There are 2 strings that attach to one handle and basically it flies in a circle around you till it runs out of gas. Some guys get pretty good at flying them and can do some pretty neat tricks.
D

The plane will have two lines secured to the bellcrank in the middle of the fuselage. The pilot stands so that the two lines are taut and an assistant fires up the engine and launches the plane by hand. The plane goes round and round in circles and is controlled by the pilots handle connecting the two lines until the pilot either gets dizzy or the engine runs out of fuel - hopefully the latter.

This model was classed as a 'trainer' to get you used to flying control line models.

Unfortunately, it was very far from the truth.

The engine just wasn't powerful enough to give a good sideways thrust to keep the lines taut, and having only half an aerofoil on the main wing didn't help much either, and so many crashes occured without ever flying more than a few feet. Luckily this one was made of rather resilient but heavy plastic and stood up well to the frequent crashes.

They later brought out a series of war birds to the same sorts of design, unfortunately, they also suffered from lack of power and the plastic was more brittle resulting in many broken parts after each crash.

Because of all this, and their very high cost for the time, they never really became popular here in the UK, so we tended to stick with the old balsa traditional models.

Had one never did leave the ground
D

You Brits must've had thinner air back in the 50's when the PT's came out. Mine flew GREAT and their reed-valve Cox engines had way more power for their size & weight than other engines of that era (Wen-Mac, OK Cub, etc.)

There were tons of youngsters that got a successful start in model aviation (and later on, full scale) flying the ubiquitous Cox PT-19.

That's my story and I'm sticking to it!

Follow the user manual how to operate the Cox engine.
http://www.mh-aerotools.de/airfoils/documents/cox_049_operation_and_troubleshooting_guide.pdf

Blogwitch said:
The engine just wasn't powerful enough to give a good sideways thrust to keep the lines taut, and having only half an aerofoil on the main wing didn't help much either, and so many crashes occured without ever flying more than a few feet. Luckily this one was made of rather resilient but heavy plastic and stood up well to the frequent crashes.

I had the differnce Cox linecontrolled planes in young age...

Keep engine high reeving with enough nitromethane without leaning out the fuel (enough oil out of exhaust port) to keep fast enough to rise of ground. The line must not be to long to slacken out line. The line length for a Cox trainer is 7 meter/ 23 feet and not more. When you are flying the plane: Go back around in ring in center to prevent you are dizzy and the lines is taut. Do not try various aircraft maneuver because the Cox PT-19 is not an aerobatic plane.

XF so far you have posted two threads . and it seems the only reason you are here is to find the value of things you have acquired and try to sell them.

That is not what this forum is about. It is about learning to build model engines and and experienced folk helping other learn to build and create.
so if you are here to learn about building models you are at the right place if you are here to sell your yard sale finds at a profit please use e- bay or other appropriate venue.
The buy sell trade area is for active forum members.
Tin

I had one of those control line planes back about 30 years ago. I remember its first flight very clearly, it went up and up and over and straight back down. Total flight time 3.5 seconds...
I lost all interest in r/c planes after that...

There you can learn much more about line controlled model airplanes in this section: http://www.rcuniverse.com/forum/control-lines-231/

Besides, on a personal level Mr Falcon, what harm has it done you?

I was seriously considering making a donation to this forum had the engines been sold on here and also looking forward to posting many more questions/answers etc in future.

That will not be happening now thanks to your comments.

Finally, on a different note, I have purchased a small lathe with the intention of producing small parts, not only for model engines but motorcycle engines too.
This renders your post unnecessary.

Please feel free to delete my post or ban me if you like - I've done nothing wrong.

Your mention of possibly making a donation after selling is very suspicious, the first thing that you should have done is read the rules. A lot of people try to use these sites to sell things, having no clue as to what the are selling. So, you have purchased a lathe to make parts, do you intend to make complete model engines for your own enjoyment, or just parts to sell.

If I win the lottery, I might possibly make a donation to all the members, but then probably not.

Finally, on a different note, I have purchased a small lathe with the intention of producing small parts, not only for model engines but motorcycle engines too.
This renders your post unnecessary.

Well sir: The only way we have to know your motives here is by what you post.
Please read the rules and follow them .