bob shutt said:
In the video it appears you are revving it up by adjusting voltage? ?
Click to expand...

Basil said:
I have a question on this also
Click to expand...

Thank you for noting that. Yes I am revving the engine with a voltage supply. It will start and run okay on a 6V battery, but lacks crisp throttle response. I want to remedy that, and have several theories and solutions. I am hoping to hear your and/or other expert's input.

The distributor has a 8 hole aluminum disc with 8 rare earth magnets equally spaced at the circumference passing over a hall sensor affixed to the body of the distributor housing. The signal triggers a Jerry Howell TIM-6 circuit board that I soldered together from a kit.

Full disclosure: I am a slow learner at all things electronic.

In troubleshooting this issue, I attempted to run on a 6V 7AH lead acid battery which it starts and runs happily on up to about 3200 RPM. It stumbles after that no matter where I rotate or time the distributor to. The 6V ATV coil was purchased from the Howell site also.
I tried running it off my 12V lawn tractor battery and promptly smoked one or both transistors. The diode and resisters were fine. Replaced the components and it worked again the same way.

My guess is that I do not have the magnet disc phased correctly with the rotor, so I am contemplating refabricating or modifying the distributor housing to allow adjustment. I like the rule: "If you can't make it right, make it adjustable"

I contemplated making another rotor and affixing the brass strip again precisely following Steve's instructions in the plans. I overthought this step during the build because of perceived backlash in my homemade bevel gears on the cam to distributer shaft.

It could also be a carburetor issue, but I feel that the variable voltage improving the throttle response is a clue. By increasing the electrical potential, it may be bridging the out of phase rotor tip to wire contacts? They all appear to be clean except for the coil one which blackens up after running several times.

Perhaps a spring brass part or graphite brush could be made small enough to fit here also.....

Any thoughts would be extremely welcome.
Russ

Hello,
The next parts to be made were the cylinder heads. A rigid and adjustable means of supporting these parts in the various angles was needed, so an aluminum table was made based on a terrific video by Mr. Pragmatic Lee on YouTube.

The pivot is 2" round aluminum and may be clamped in the mill vise for light duty, or clamped to the table slots as shown. It is easy to make and fairly repeatable if one sweeps the parallels with an indicator. It also proved useful later for the intake.

Hello again,
The next few weekends were pretty tedious as I had anticipated making valvetrain parts. I opted to wind my own springs using an online calculator here:

www.cgtk.co.uk
Valve material was SS 303, and machined it 0.100 at a time while pulling out of a collet chuck. Followed up by using a shop made external lap to final tolerance. 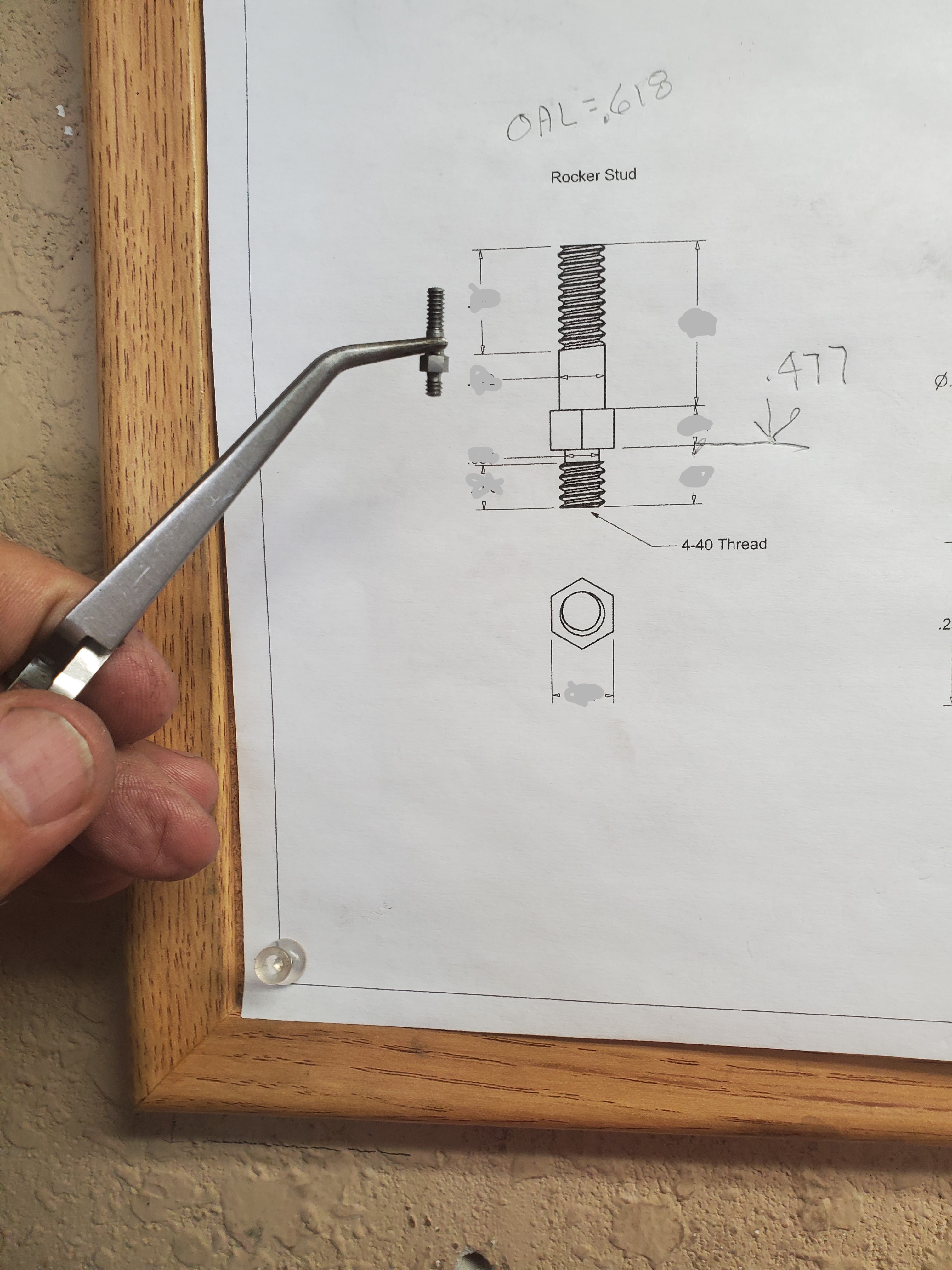 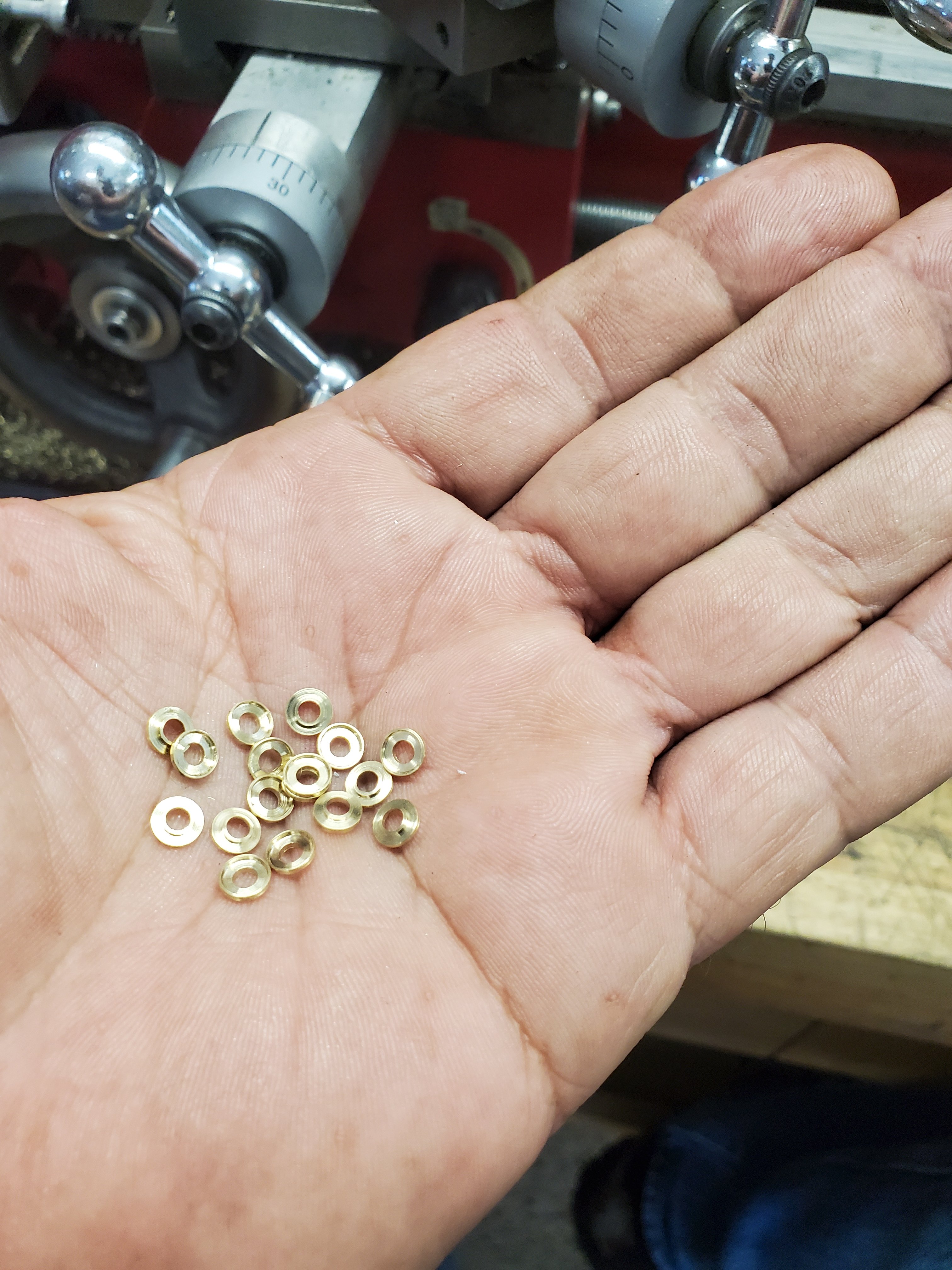 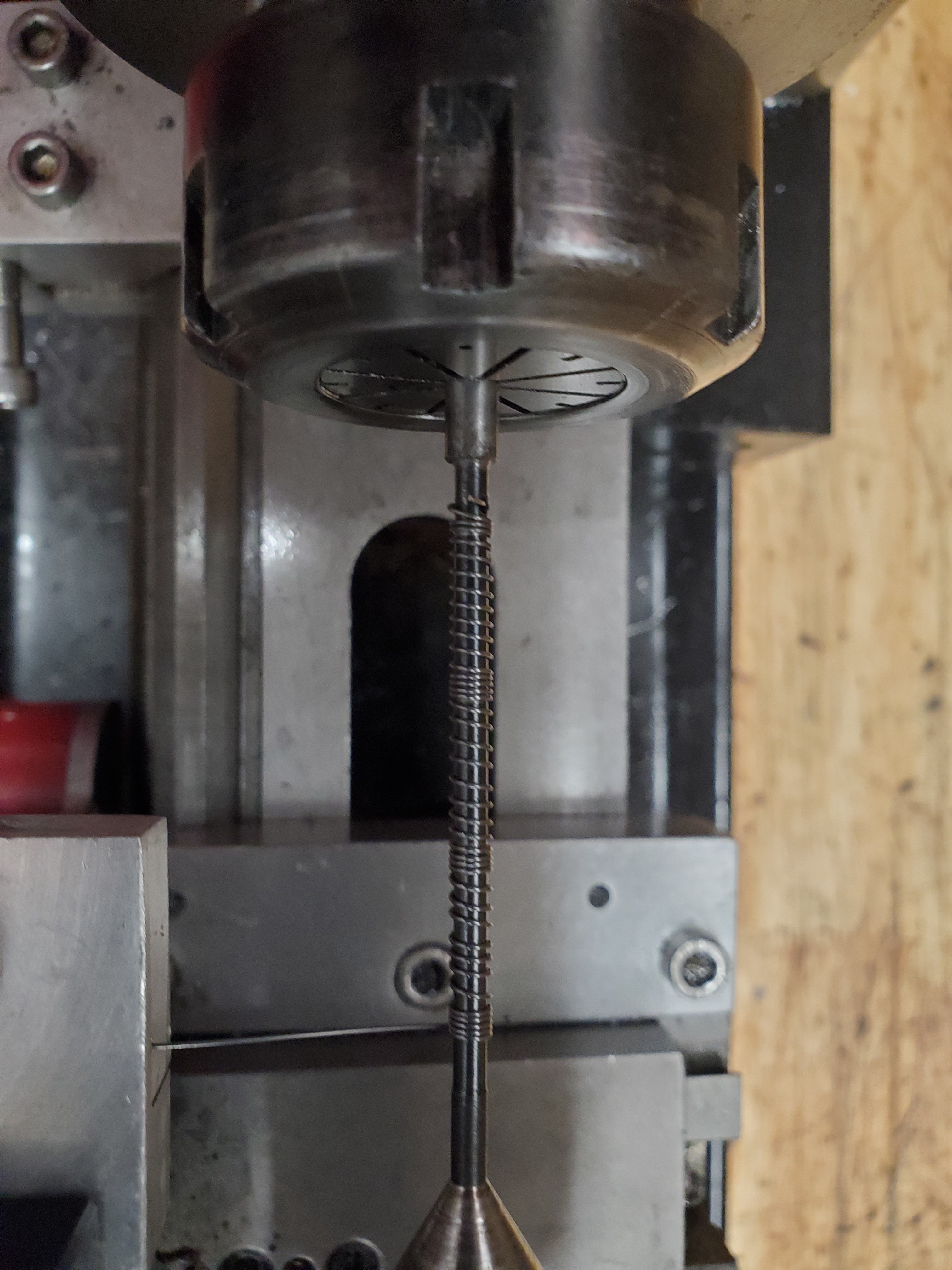 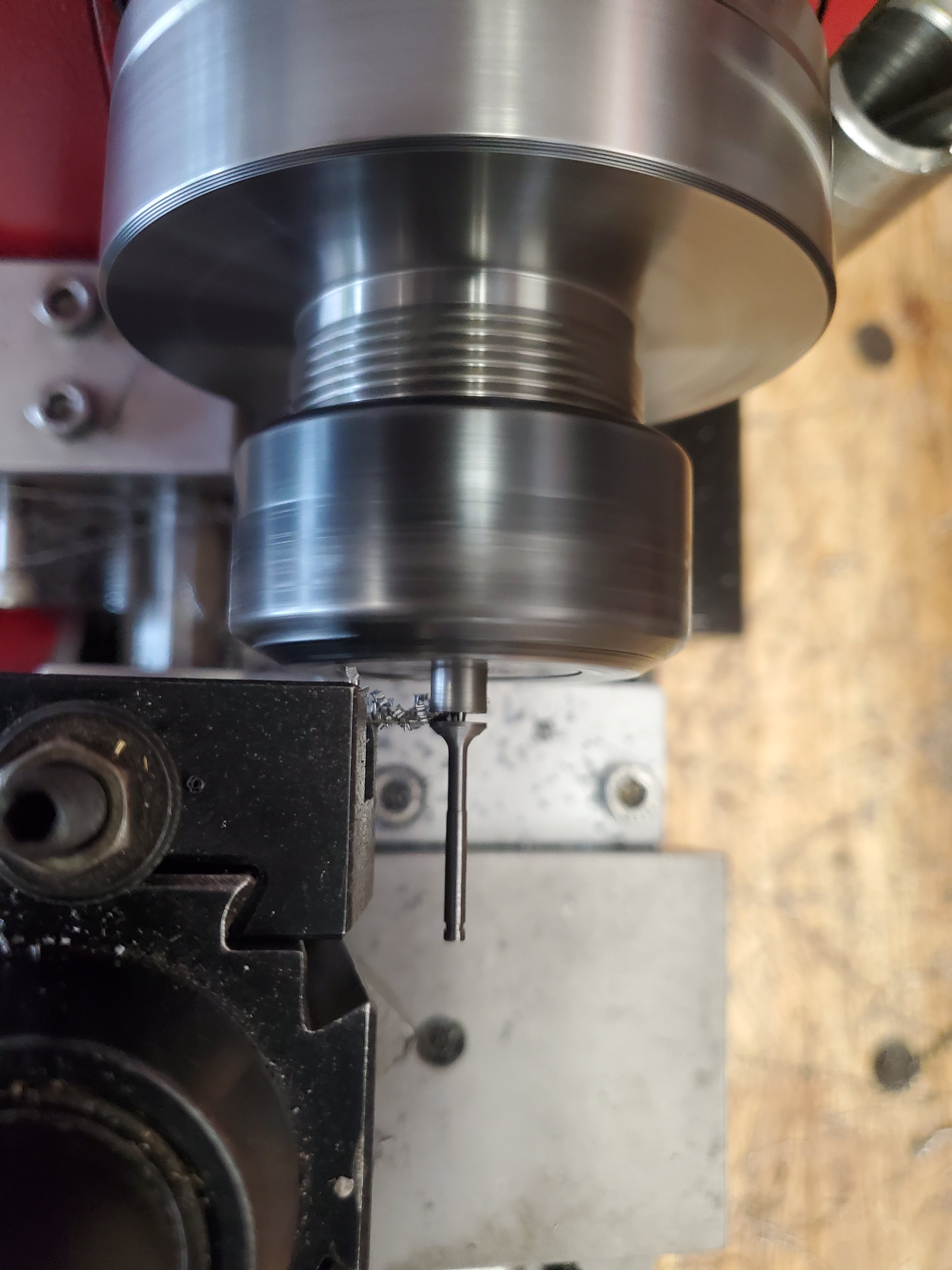 Hello,
The camshaft was made on a 7x14 lathe using a jig and dial that was in the plans. A cutting chart gave depth of cut based on relative indexing of the camshaft blank. A standard grooving tool with carbide tip was long enough to use. I used Dykem to mark the lobes at each step and followed the chart 5 degrees each step. Only a little bit of filing and emery cloth at the end gave very satisfactory results. I had never made a billet cam before and thought this was a brilliant idea by Steve.
Russ 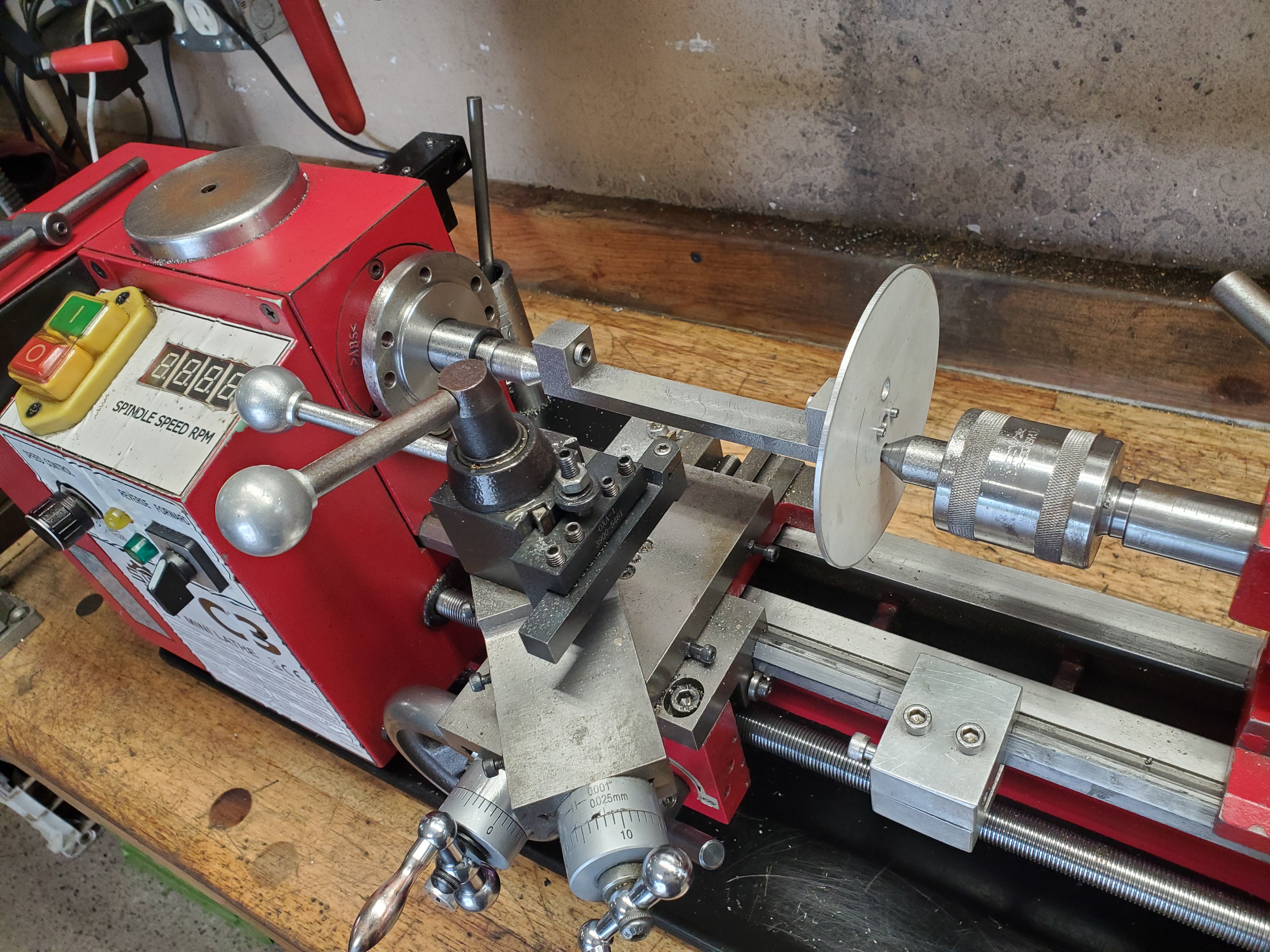 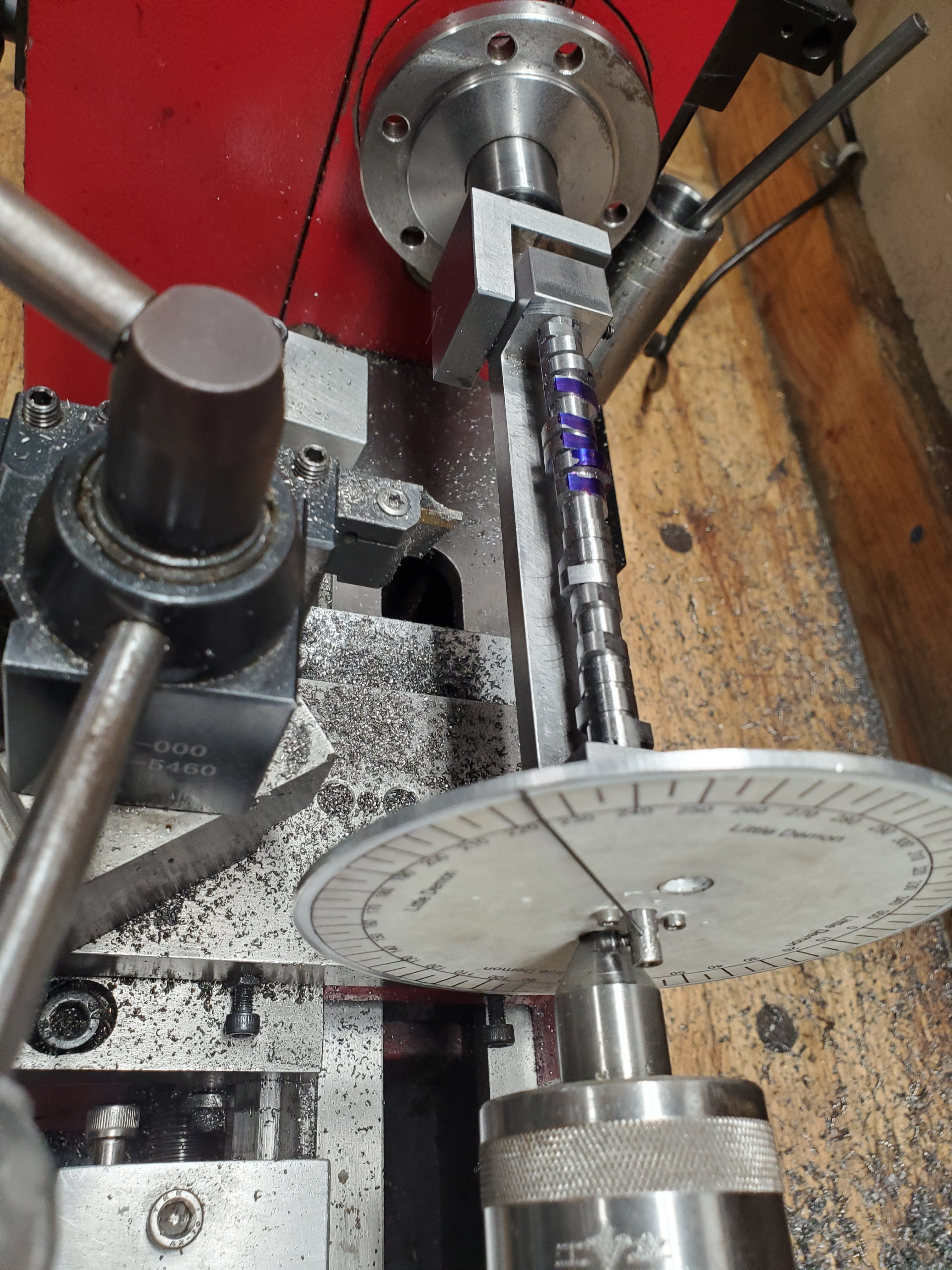