The best of luck, and may the workshop pixies bring the parts and materials you need to the fore.
T

Wish you the best, please keep us posted

I look forward to seeing the engine develop!
M

Hallo Minh-Thanh,
You already know me from several model engine projects.My forumname is modelmotor we have had several times a short contact with each other.
I have been watching the building and running from your clean built horizontal one cilinder diesel engine.
What a beauty she is and what a nice running engine.It's finish is so beautifull you might be proud at your
beautifull Crafmanships work.I hope that you will enjoy your model engine work for many years from now on.

Hi modelmotor !
Thank you for your compliment!

modelmotor said:
I hope that you will enjoy your model engine work for many years from now on.
Many greetings from modelmotor-Gerard-The Nethelands-Europe.
Click to expand...

That is for sure !
There's one thing I don't like (from myself), when I watch the projects of the members of the forum, and I have a plan to do it someday (maybe I'm too greedy ).
About engines I have done, it is the result of the help of the members and useful information in this forum, I just try to do well what I have learned from all of you !

I have been following your post and noting the various comments which I think you will find useful. I will add to the discussion with my own experiences re building a true model diesel.
Just over 2 years ago, I decided to attempt to build a true diesel e.g. one that runs on diesel and uses solid fuel injection. I did a lot of research on the net and determined that there were only a handful of engines built. There were several very fine models but I suspect that they were using fuel additive to kerosene or similar which means that getting the engine to run is that much easier because of the significantly lower compression required. Some of the mixes used 30% or more of ether which has a low compression ignition point.

Back to my journey. My engine is a horizontal type with a side shaft to operate the valves via cams. The bore is 45mm with a 80mm stroke and there were no problems with that part of the build.
When it came to building the fuel pump and the injector that was a completely different story. I ended up making 11 pumps and they all failed for different reasons. The main one was attaining the required pressure of 1800 plus psi. Up to 1200 was not a big problem however, after that strange things would happen. I spoke to all and sundry about the problem and came to the conclusion that I was not able to get the near zero clearances required in the pump bore and the two valves. I finally relented to purchasing a commercial pump which was quite small with the intent to remove all of the excess material to make it as small as possible. The pump worked fine and easily produced 4000 psi and at that point I couldn't turn the engine over. So that part of the problem was solved.

The next was to check the compression which I did using a temporary head fitted with a non return valve on both inlet and outlet ports and everything else blocked off. The piston was fitted with four rings and the best I could do was 300 psi approximately. Note, I had also ground the piston to fit using a cylindrical grinder. The piston was quite long and there was room to fit more rings which were 1.5mm wide. So I added three more rings and re did the test and this time, I reached in excess of 500 psi. That was problem two solved and then onto the injector.

The injector was a problem in itself because of its small size. I read up on all of the different designed types then developing my own and after twelve attempts I gave up. The problems involved clearances and sealing. I made an injection tester and the target was 1800 psi for pop off. At this pressure, the fuel was easily atomised however, all of my injectors dripped and now reside in the bin. In the end, I purchased a miniature pintal injector nozzle being the smallest that I could find at about $10. I then made a housing for it and went to the trouble of surface grinding the face of the compression plug. When I gave it a try, after putting in a stronger spring, the pop off range was from 2200 to 1400 psi. I set it to 1800 approximately.

After a lot of fiddling around, I managed to get the engine to run with a lot of smoke etc and noise. I clearly haven't got the timing right and the fuel control is too coarse. I believe I am now reasonably knowledgeable with respect to building these small engines and if I was to start again, I would have a good look at a long series injector nozzle and machine it down to be left with the barrel and needle which can be as long as 20 to 25mm. Then make a suitable housing. Note, the material that the pintals are made from is very hard e.g. better than 4140 but still machinable. The problem with building the pump, is the very small amount of fuel involved and its associated pressure. The fit between the piston and the bore must be absolute and you can't use conventional ball valves unless you have specialised experience or very good luck.

I would also suggest you purchase one of these cheap Chinese fuel pumps ($20) and have a good look as to how it works and use the non return valve from it. The pintal needle valve can be modified with a Dremel friction blade to give the fuel adjustment slot. Again refer to the commercial pump to see how it is done.

Building a true diesel is quite a difficult project and you join a special group if you do so. I have now diverted my attention to another project which is a Fairbanks-Morse R80 which is a three cylinder, igniter ignition engine. See attachment and note, it is entirely from bar stock e.g. no castings. 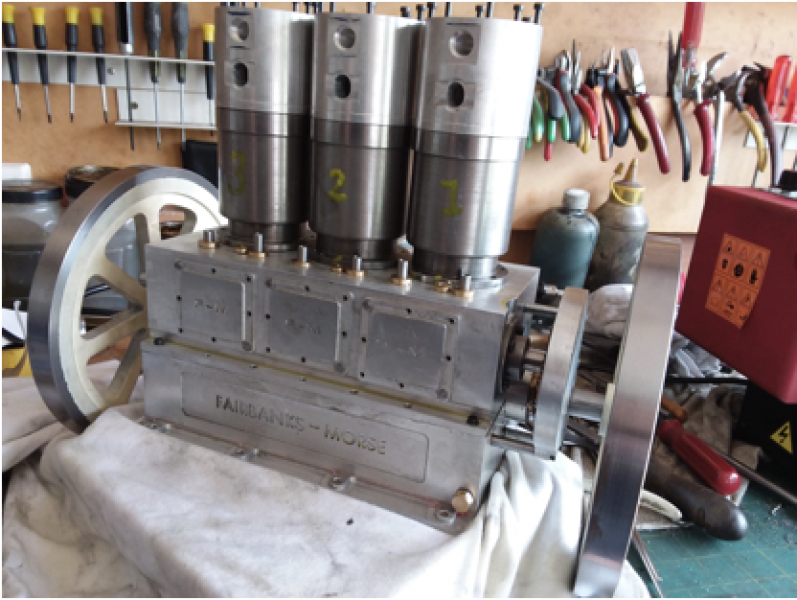 Hi weir-smith !
About of fuel: I do not plan to use diesel, diesel is too concentrated , with a small engine to create the necessary pressure to vaporize diesel oil is a challenge of endurance of metals (injectors, valve . , pump ..) I just need an engine that runs on the principle of a diesel engine.
I have 2 ideas to make injectors and one idea to process ball valves - I am trying to make
Thank you very much, especially for the cylinder pressure and oil pressure data, as well as the tips for injectors and pumps and all the difficulties you have encountered
You must log in or register to reply here.
Share:
Facebook Twitter Reddit Pinterest Tumblr WhatsApp Email Link