I have a cheap Chinese lathe that didn't come with a thread dial. I've been looking at various YouTube videos and want to try and make one similar to what many of these videos show. Most, however, seemed to be based upon an imperial based lathe lead screw. My lead screw has a 1.5 mm thread. If anyone has a similar lathe, could they give me details of the gear that runs on the lead screw? I have made a couple attempts at making a gear that will run against this lead screw, but so far nothing tracks it accurately. I am looking for details like diameter, number of cogs, dimension of each cog, etc.

Any help with this would be greatly appreciated.
D

This link will tell you what gear you will need for a particular thread:-

The pictures on this post will help you understand the concept:-

To save repetition, this is something I posted elsewhere, which also explains it:-

If making a gear, it will need to have a CIRCULAR PITCH of 1.5mm, which is 0.48MOD or 53DP, neither of which are standard. You could therefore try 0.5MOD. The gear tooth shape does not need to be a precise as it is only a counter and no power is transmitted. The correct number of evenly-spaced gashes filed in a thin disk will work.

Where in the world are you located? I ask because Amadeal(UK) stocks a metric thread dial for the mini lathe.

Little Machine Shop(US) does not.
C

Thanks for the replies, they do help and it sounds like I might be making this more complicated than I need to. As to where I am located, it is in rural, central Virginia in the US. One interesting detail about my location, I recently found out that Frank Hoose, the host of mini-lathe.com lives about an hour south of me. I've exchanged several emails with him and hope to visit his shop in the near future.

Craig, I'm in E. Tennessee, near Jonesborough.
Is your lathe a 7x mini?
C

I went through a multi part YouTube series that was posted by the "Aussie Shed" which I found interesting because I have the very same lathe. All the issues he talked about in this series I have on my lathe.

Hi Chuck,
I agree leaving the half nuts engaged is the easiest way to cut threads. I resurrected an old Boxford lathe and installed a VFD driven motor. It has been set up to accelerate and decelerate fairly slowly. This makes it very awkward when running a thread up to a shoulder as the lathe continues to rotate after the OFF button is pushed. It became clear that I needed to disengage the half nuts to stop threading instantaneously. The lead screw is imperial but I cut both metric and imperial threads. I didn't have a thread dial but made one as shown in the picture. 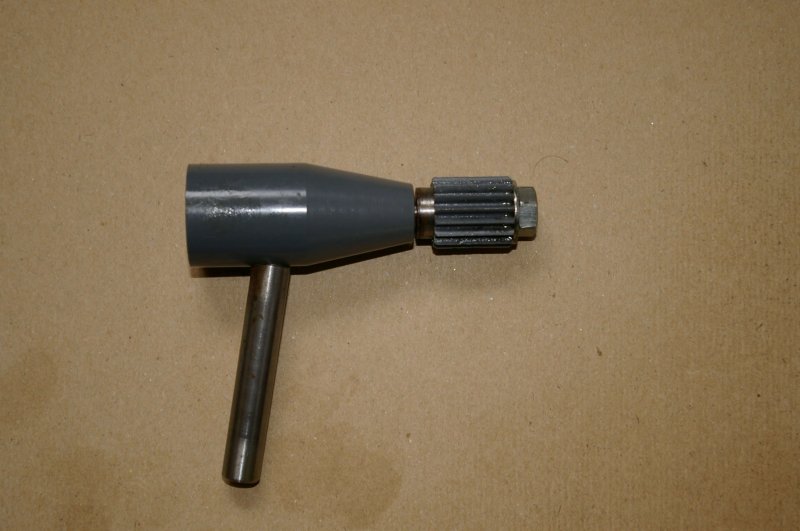 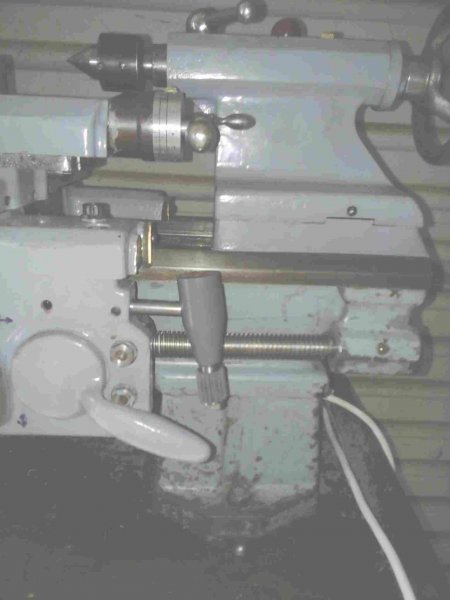 I made it out of PVC as it was only supposed to be a prototype but it worked so well I use it as is. Note that the gear needs to be angled to match the thread angle of the lead screw. I have attached a drawing of it.
I came across this on Youtube which shows how to use a thread dial for cutting both metric and imperial threads.
The procedure is as follows:

After setting the tool to cut the correct depth, start the lathe in the forward direction and when the thread dial reads 1, engage the thread nut.

When the tool has advanced to the end of the thread, disengage the half nut and turn the motor off.

Withdraw the tool to clear the work.

Start the lathe in reverse and when the thread dial reads 1 engage the half nut.

Run the lathe in reverse until the tool clears the work.

Turn the lathe off but leave the half nut engaged.

Set the tool to the new depth and start the lathe in the forward direction.

Repeat till the thread is cut to size.

I hope this is helpful.
Regards,
Alan

If your Boxford has the 8 tip lead screw there are files to print a thread dial on a 3D printer.
https://www.thingiverse.com/thing:2800869
Click to expand...