Now "if" the quadrant gears rotated the pinion , but stopped short of the key, the engine would reverse and run , but then had lead on the timing. Of course the penalty for doing that was the reversing shaft transmitted power to throwout bearing which then passed it to the quadrant gears ,which then transmitted it to the Pinion gear fastened to the eccentric . That does work but involving the whole mechanism means excessive wear of all those components. Normally, the pahse changing mechanism has no load on any component during running operation, only during the actual changing of direction do they see load
Hope this helps

Well that clears it up........NOT !
Its not that Rich didn't explain it, it is that my limited brainpower is having a lot of trouble seeing it in a comprehensive fashion.
This is not a simple valve gear mechanism/engine operation, in my opinion.

I will start a new thread about my general approach to understanding valve gear, so as to not clutter up this thread.

I became interested in steam engines at a young age, as I assume as many folks did, by operating a Wilesco steam plant and engine, which was a single-action oscillating engine. I went so far as to build a boiler and single-acting steam engine for a 12 grade science project. Most folks who saw...

KellisRJ said:
The Brits were the first with Whitworth 1841. US had some, a document was published in 1864. Civil War rifles had interchangeable parts, as did standard Quartermaster mule wagons. But IIRC it wasn't until 1916, WWII and the introduction of Johansson Blocks that standardization really hit the US. The now standard reference Machinery Handbook was first published in 1914 with several standards, but SAE wasn't there yet. Wikipedia, and an interesting book "One Good Turn: A Natural History of the Screwdriver and the Screw"
Click to expand...

I agree about the book, entertaining, educational, fascinating and very readable. Worth getting access to a copy (library? in the UK a library can accesss interlibrary loans to get books from any other library around the country on loan, not sure about the US.) 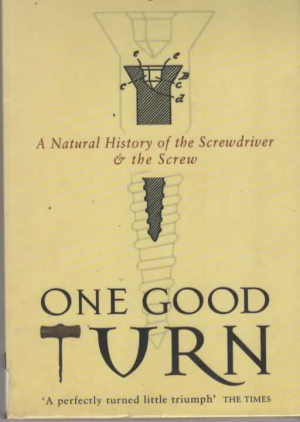 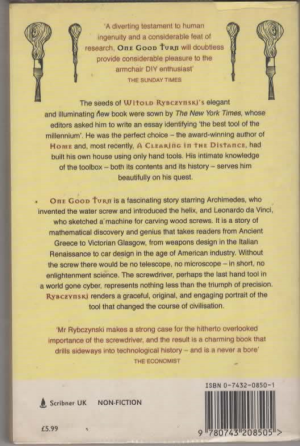 So if I understand the Monitor valve gear correctly, the main eccentrics can be moved to a forward or reverse position, or perhaps a position to give a little lead in forward.

The cutoff eccentrics are fixed to the shaft, and they are not adjustable, at least not dynamically as the engine is running.

I guess I am a bit surprised that there is not a dynamic adjustment on the cutoff valves.
Is this because some optimum point for cutoff was found at which to run the engine while in forward motion?
I guess if the limiting factor was the boiler capacity, then perhaps not much need to vary things other than with the throttling valve.

Maybe no adjustable cutoff because the load on the propeller was constant?

On some steam engines, it seems that full pressure is always applied to the steam chest, and in some cases the speed/power of the engine regulated by dynamically adjusting the throw of the valves, thus eliminating the need for a throttling valve.

I am puzzled by the fixed cutoff.

OK, Lets talk about cutoffs.
There are several types (3 ? ) , there is a Riding Cutoff where the Cutoff valve directly rides on top of the main valve. This type generally allows various amounts of steam admission and in some cases has a governor controlling the steam feed .This is a variable cutoff setup.
Then there is a cutoff that has a valve working in it's own chest ( AKA Cutoff chest) , and this is what Monitor has . This type can be variable or fixed.
The variable can be controlled by a governor, or by moving the eccentric locations .
The Fixed have a preset /predetermined cutoff point that was based on design expectations.
In the Monitor's case, John Ericsson determined that if steam was cutoff when the stroke
had reached 40% of travel that it would propel the ship at his cruise speed ( 6 Knots) and require less coal. The Cutoff Eccentrics were fastened ( fixed with a key) to the main shaft unlike the Main Eccenttrics which could be rotated on the shaft for direction control
. My guess is that it would only use half the steam required versus full power, of course there were other engines running for air and water pumps so maybe 75 % Boiler use (?)
Rich
Last edited: Oct 1, 2022
R

The main steam valve rides on the valve face of the Cylinder ( 3 port slots shown) and that is in his first picture
Then in the Second picture you can see the Main Steam Chest that covers the main valve and
its top has 2 slots for the Cutoff valve , and then the Cutoff Valve Chest is a cover and has the barrel inlets for steam

And I assume there was probably a "sweet spot" or optimized point for the cutoff valve setting, that used the best compromise between boat speed, power produced, and steam efficiency; given the fixed boiler output available.

Very fascinating valve gear for sure.
Thanks for all of your info Rich.
I have problems understanding it even when looking at Rich's very elaborate drawings and exploded views.
It amazes me that anyone has figured out exactly how this valve gear worked.

And very cool that Mark is attempting this build, with so much success.
Hats off to anyone who even attempts this engine.

The ship was likely not intended to steam in reverse for very long, so cutoff was deemed unnecessary.

As the weather cools I am starting to work in my shop again. This post will cover the crankshaft. Probably the easiest crankshaft I have made. I used leaded steel for the parts made from round stock so I elected to “blue” the steel to help with corrosion. As an extra barrier I coated the steel with a light oil with a drop of lanolin. I made the crankshaft a bit shorter than the real deal to better fit on my display stand. The shaft to web is keyed and is a hard press fit. The crank pin has no key but is also a hard press fit. 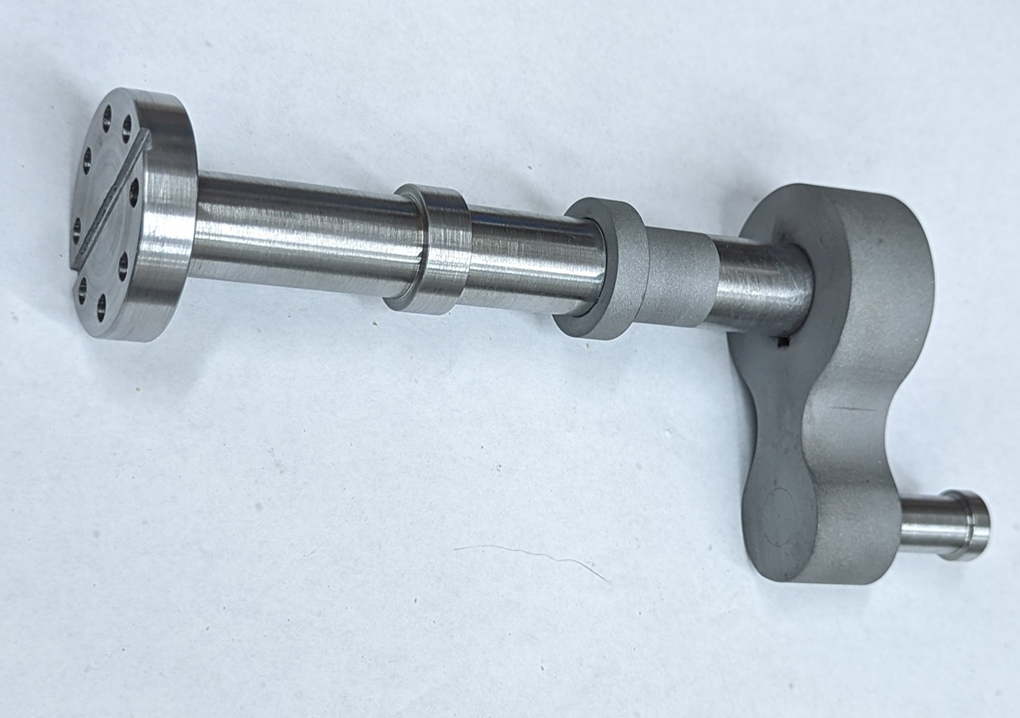 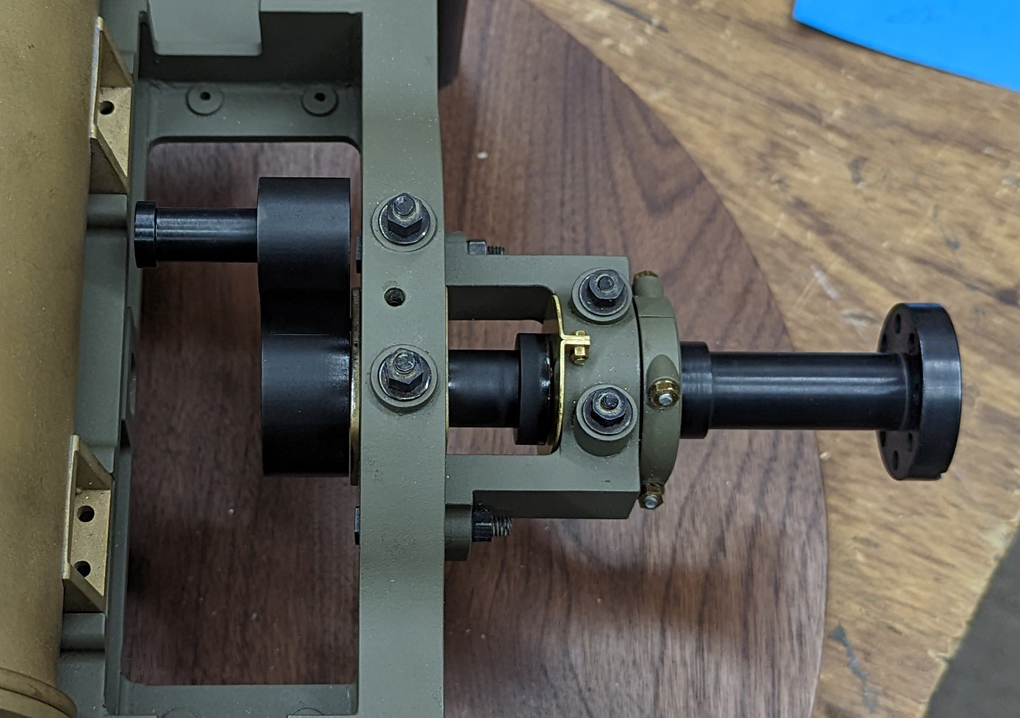 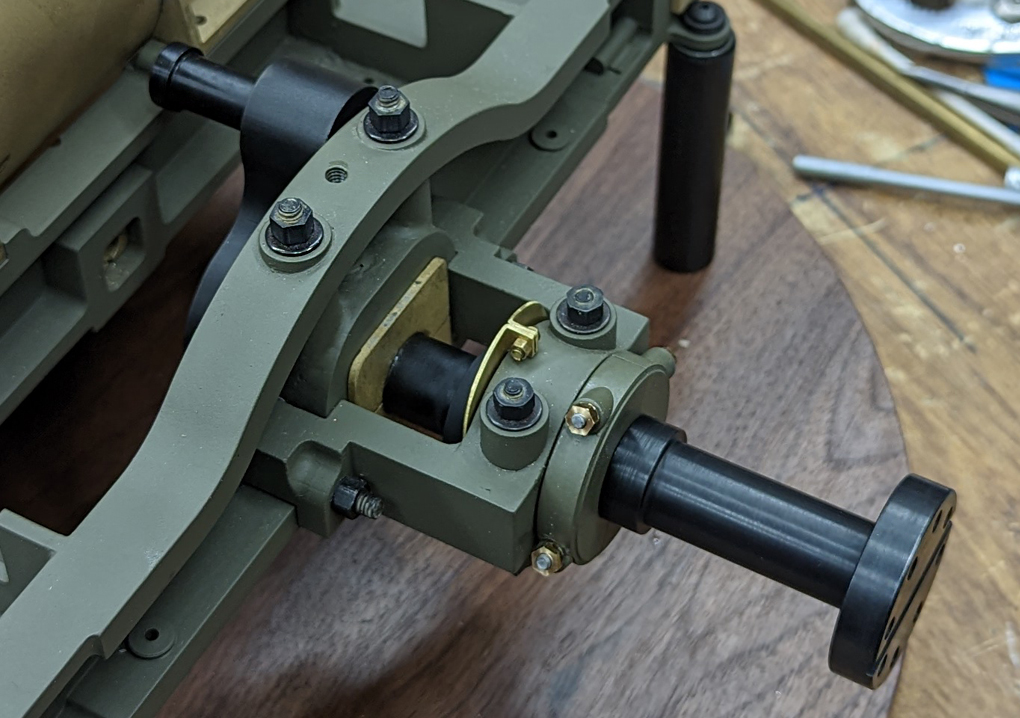 I love this work. HOpe to see it. I have 12 days left of regular work then some part time till probably early Decemember. Would like to come by to visit your lathe and other tools.

Richard Hed said:
Would like to come by to visit your lathe and other tools.
Click to expand...

Always welcome. FYI, you will be getting a pat-down before you go.

dnalot said:
Always welcome. FYI, you will be getting a pat-down before you go.

Thanks for the comments and likes guys. FYI this thread has had over 11000 views so someone is interested. I took most of the summer off and a great summer it was, not a drop of rain for three months. And then 12 days ago it started to rain. And it never quit raining, I had 3.5" of rain yesterday. So I will be picking up the pace on this build as winter sets in.

So here we have the connecting rods. Fiddly little parts. Took way longer than I expected to make. My desktop mill struggles when cutting steel. Next up the rocker shafts. 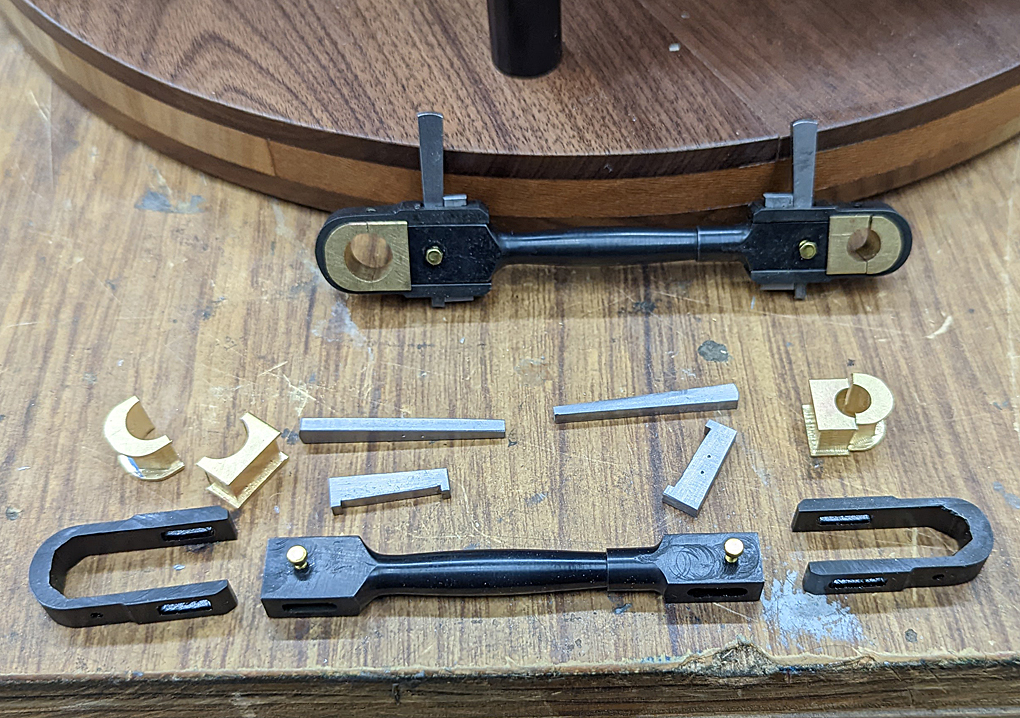 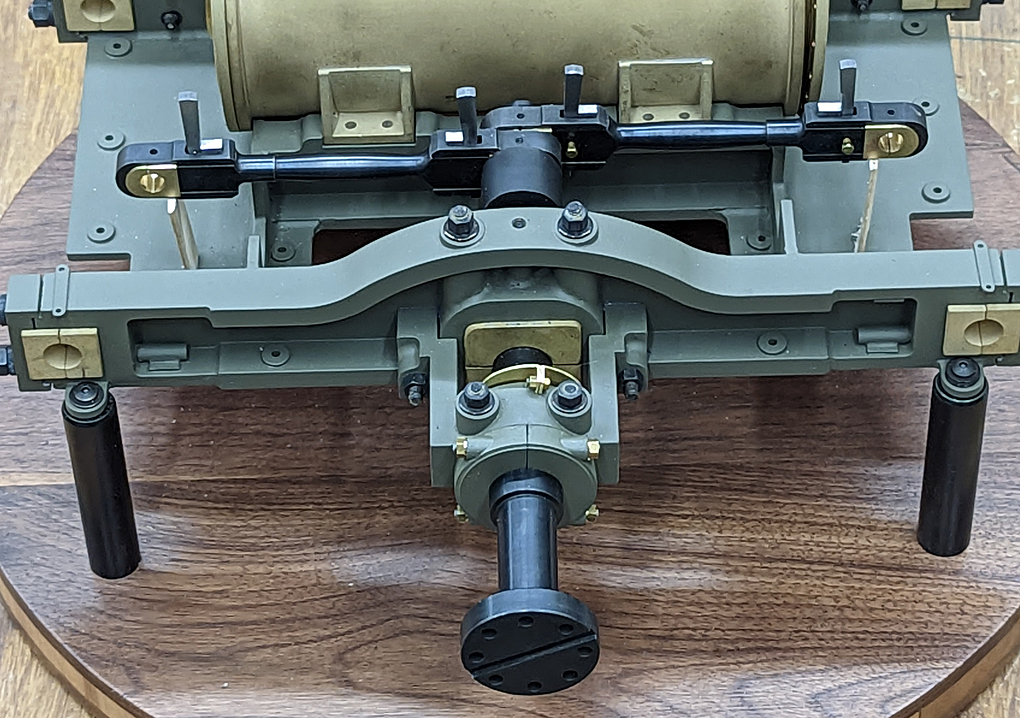 Steamchik:
(e.g. Charles Cromwell's mob etc.) they turned Ploughshares to swords" - and back again after they returned from war.

did you ever read an unprejudiced book abouit Cromwell? I'm surprized to see you on the naughty side of the question. I understands it is more of a fighting question (like our own civil war), in Britannia than here. HOwever, I am a proponent of Cromwell--naught that he didn't have his serious problems, I mean, Newton was on the other side mostly because Cromwell was anti-science. But the Charles's were worse IMNSHO. During the first CW, Cromwell won and basically gave back the crown to Charles I who then went and started his dirty trix up again. That's why he got his hed chopt.

Here are the rocker shafts. Beefy bits these are. Bet it took a fair sized work crew to move these into place. I have them nicely fitted to the bearings and they turn smoothly. They were made of two parts and silver brazed together. The big hole through the arm is an artifact from the previous use of this bit of metal. I plugged it with a steel plug pressed into the hole and sand blasted the part except for the bearing surfaces. I used leaded steel that rusts quickly so I blackened the part to help with corrosion.

Next up will be the arm that connects the con-rod to the rocker shaft. 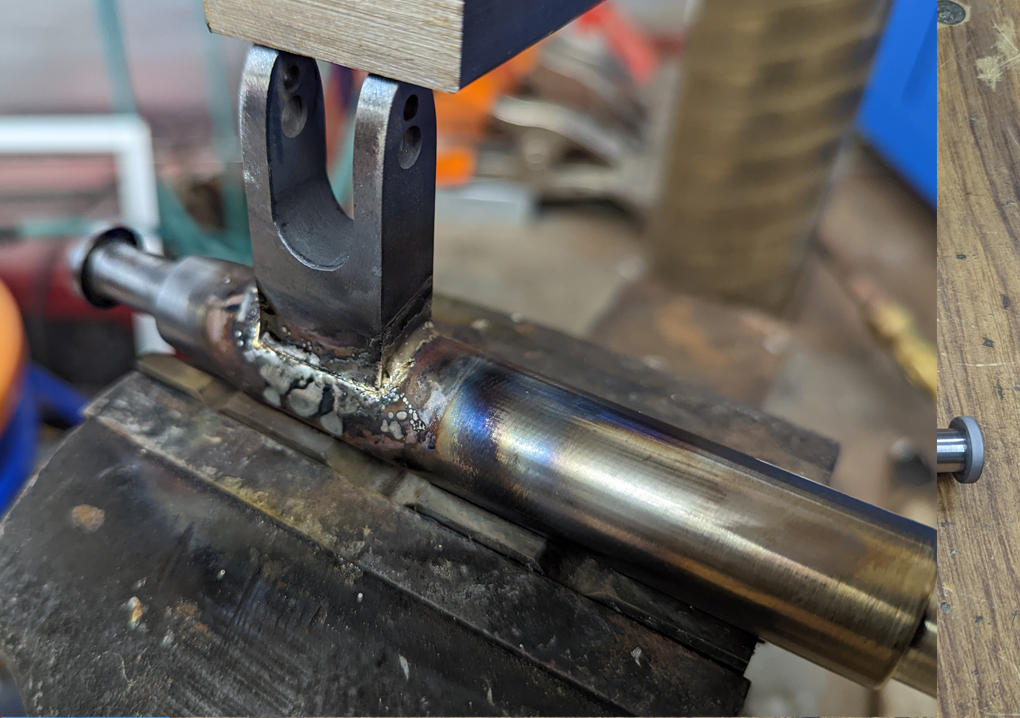 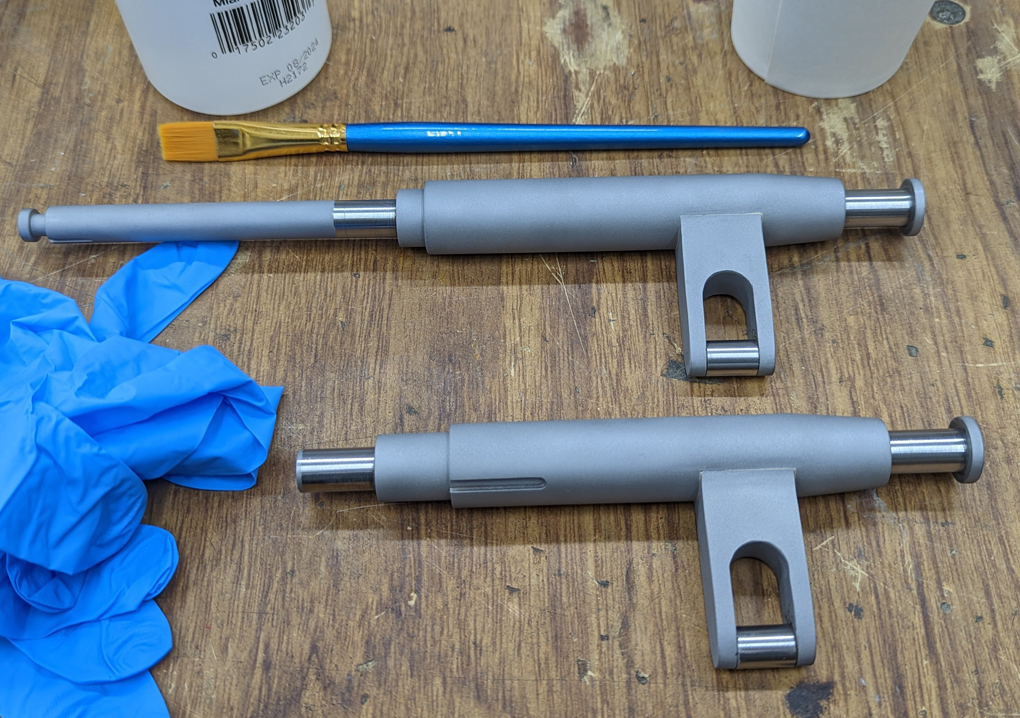 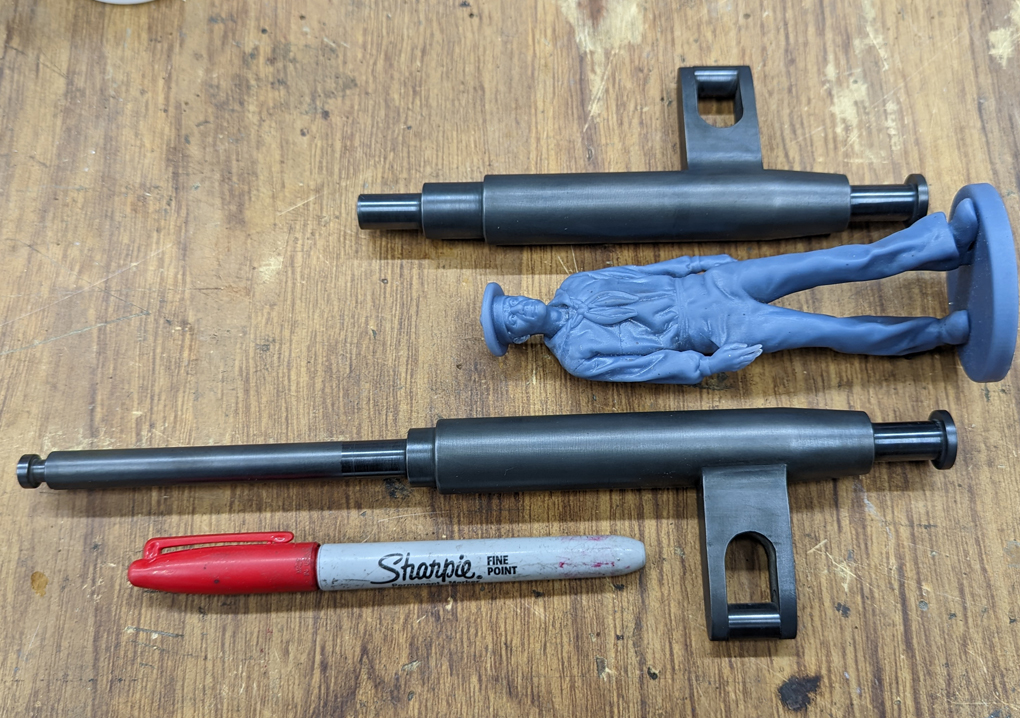 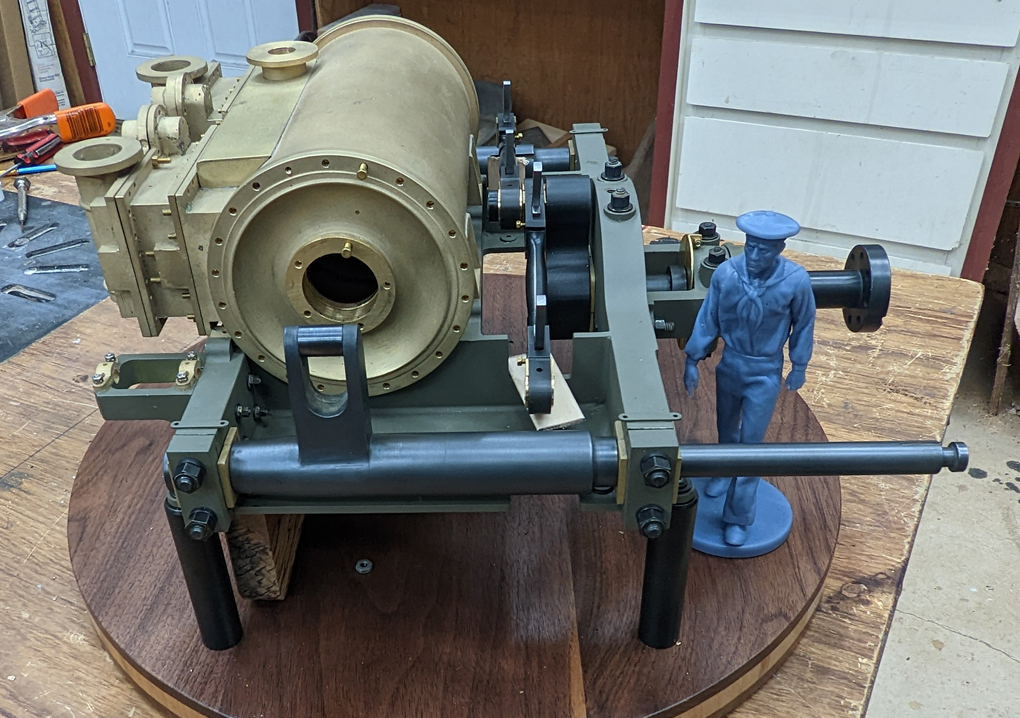 Mark, I love the care and attention you apply to every part. Really a top example of how to make and finish a model - as you progress. Wish I had the patience, knowledge, time, etc. to follow your example. I must try harder!
K2

Do you know how they assembled the engine inside the Monitor? You said it weighed 30 tons. I can imagine it did. So each of those parts you have shown us would have weighed 7-800 lbs? I can just imagine men trying to man-handle the parts thru a hatch too narrow to get the part easily down. They must have put the engine in before putting on the deck. did they have more than one deck?

Richard Hed said:
Do you know how they assembled the engine inside the Monitor? You said it weighed 30 tons. I can imagine it did. So each of those parts you have shown us would have weighed 7-800 lbs? I can just imagine men trying to man-handle the parts thru a hatch too narrow to get the part easily down. They must have put the engine in before putting on the deck. did they have more than one deck?
Click to expand...

I believe the deck was made of wood covered over with iron plates. So I would think they assembled the engine in place and decked over it. I was a boat builder by trade and that is what we would do. Often I would make the cabin top removable for changing out an engine. A sleeved engine could generally be rebuilt in place, only requiring the cabin floor to be removed.

Mark T
You must log in or register to reply here.

I
Metal casting at home
2