Time to start a new project. This build will be of a Holt 75 engine built to the plans offered by George Britnel. Thanks George, nicely done. No instructions provided, just the drawings so its going to be a great strategy game. I expect we will be seeing others building this engine to George's plans.

I like to start with the hardest part whenever I can because if its beyond my ability there is no point in going on. So for this build its the 4 journal crankshaft. I have turned a couple of single journal crankshafts and a two journal 90 degrees off crankshaft. So I am starting with some confidence but nevertheless will wait and see if I am successful before posting.

I do not plan to do a step by step log on every part, but the Crankshaft deserves a little more than a “here it is” treatment. Such a pity that the part will be hidden from view when the model is completed.

The crank is being cut from a 12” length of 1144 stressprof steel. I would have preferred a piece of rectangular material but was only able to locate that material locally in round stock. The first step was to turn the ends and the center bearing.

Cutting speed was 70 RPM and a feed of of 20 turns per inch for roughing and 114 turns per inch for the final cut. Cutting depth of .020” I stopped .0004 short of the .5” diameter needed then used cloth sandpaper to the final diameter. The first end was turned between centers. The second end I inserted the part into a collet chuck to keep from marring the surface of the completed end. 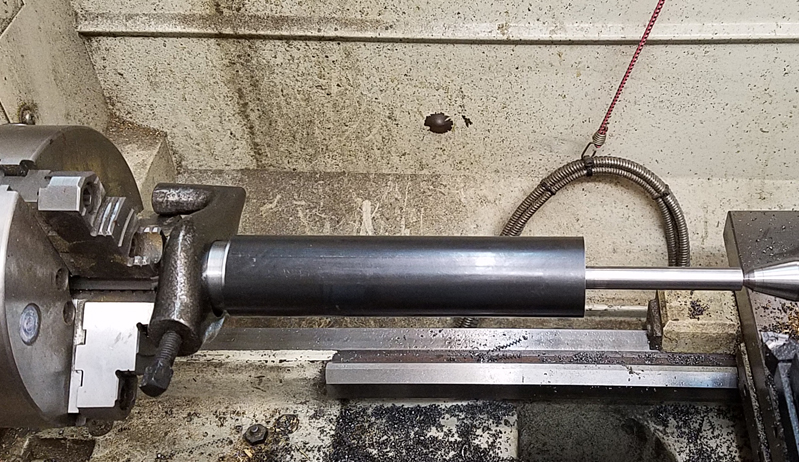 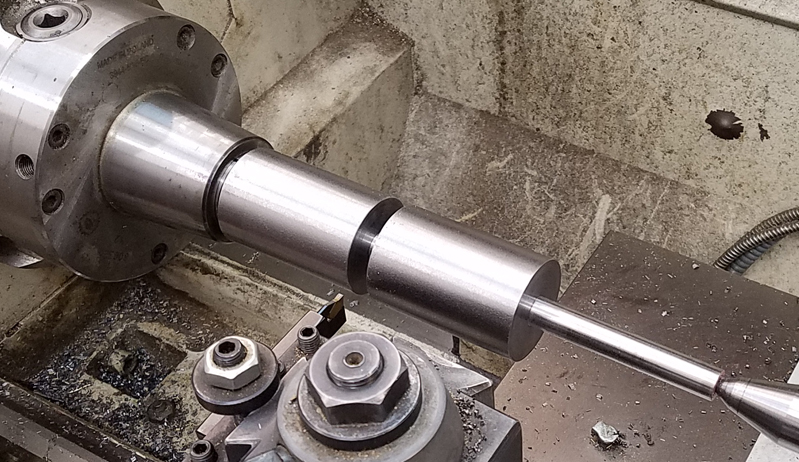 It cost me a days work taking the material down to thickness. A rectangular piece of steel would have been so much nicer. My little mill was able to take a .010” cut with a .5” HSS bit just fine.

Additional cuts on the mill were made along the way at each journal to remove excess material before returning to the lathe. 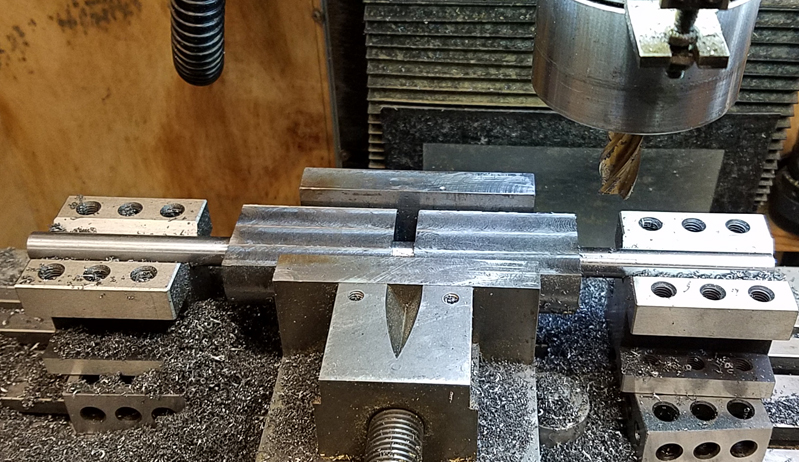 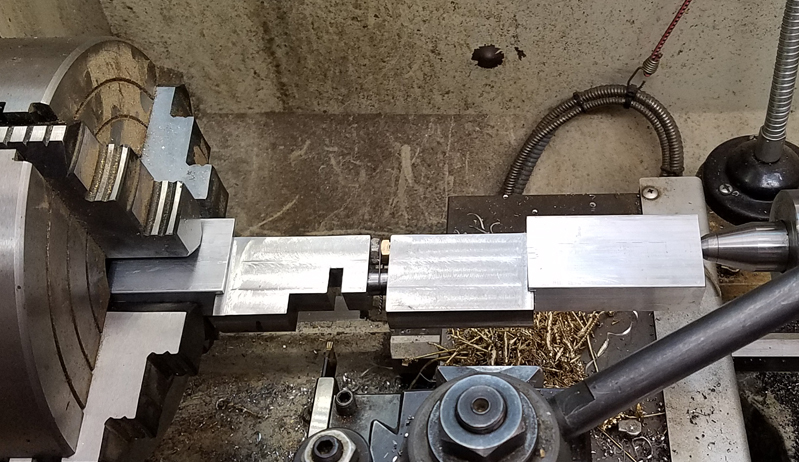 The blocks that provide multiple centers were notched to transfer the torque load to the web so as not to put any strain on the end of the crank shaft. Working from the center towards the chuck kept any strain on the delicate areas to a minimum. 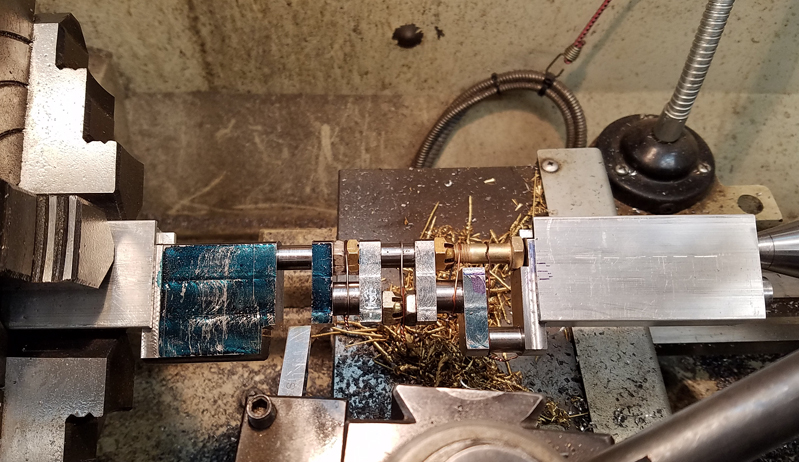 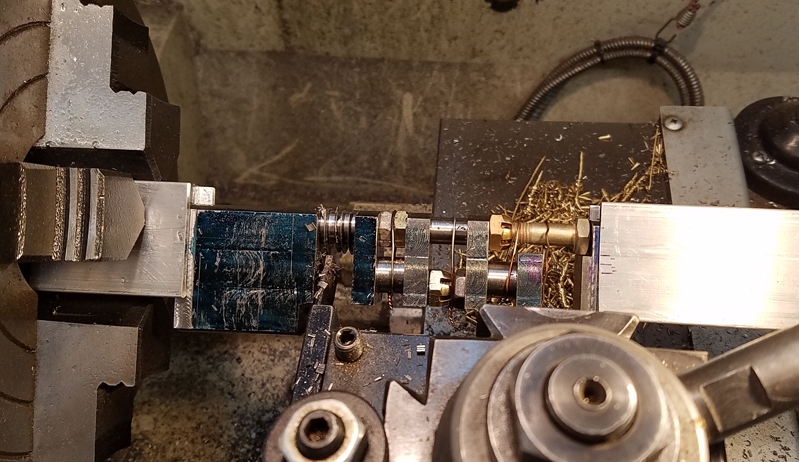 Before using the parting tool method below I tried using a narrow deep HSS cutter. I ground it several different ways but could never get it to cut without chattering and it tended to wiggle back and forth.

I cut the center journal first and then worked my way towards the chuck I used a cutoff tool with a carbide insert. Plunge cutting about .050” deep per pass. After the cut was about a third of the way to my target I would stop and then take a HSS tool bit to dress down the side of the cheeks. At 2 thirds of the way I dressed the cheeks again. From there I used the parting tool again plunge cutting to within .005” of the target dimension then started very light cuts panning the tool back and forth until reaching the target dimension. The parting tool left a very nice surface only requiring a little sanding with a cloth backed 320 grit paper. I will smooth the journals a bit more when I fit the bearings to them. A final dressing of the cheeks and off to the next journal. 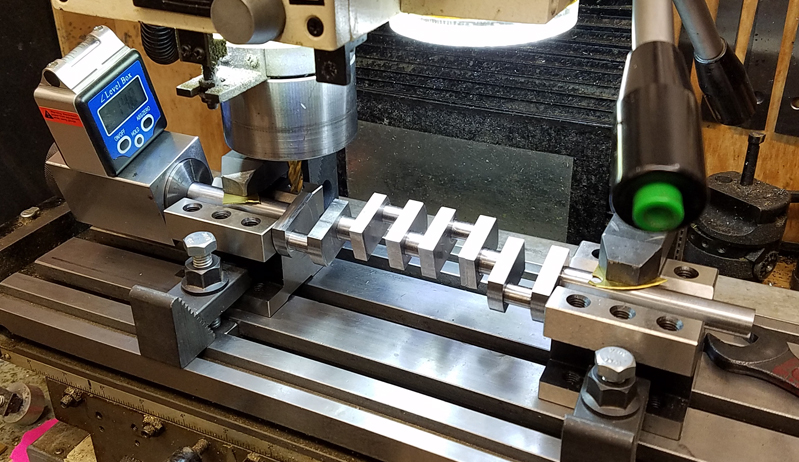 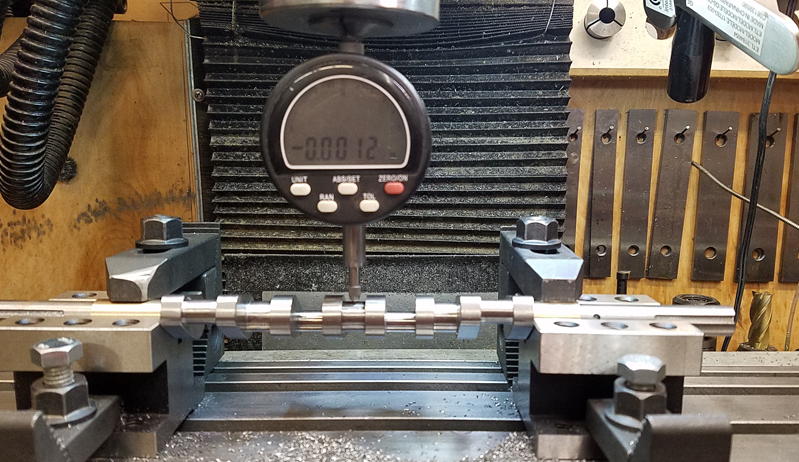 Is it perfect? When does that ever happen? I was able to turn the journals to the correct diameter without any problems but the cheeks varied a bit in thickness at first until I worked out what tools worked best. Is it straight? You tell me, when supported at the bearing point at each end the run-out at the center bearing is .0012”. So the center bearing is .0006” out of place. And the run-out at the ends where the flywheels will be mounted is .0017” at one end and .0018 at the other.

So here it is, I'm happy with it so the build is on. But winter is nearly here and I live nestled in the mountains between Mt Rainier and Mt Saint Helens. I need to spend some time splitting firewood, servicing the generators and putting the heater wires on the roofs to keep the snow load from becoming to great. After that I will start the crankcase parts. 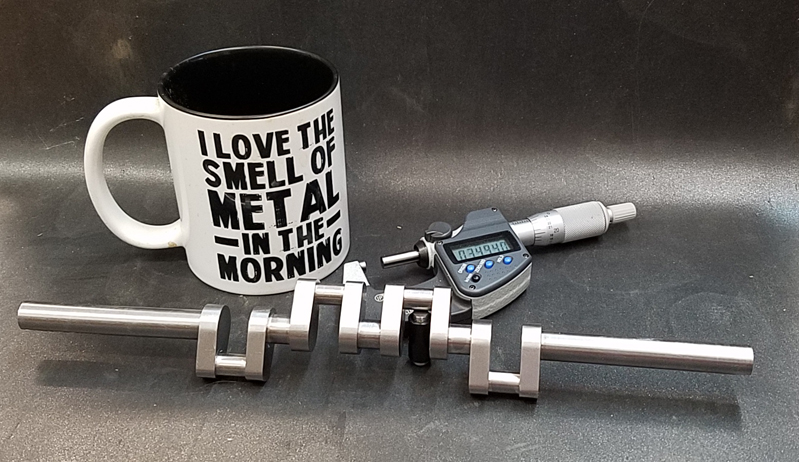 Excellent job! The tolerances you hit are just fine. Given about .0015 clearance for oil it should spin over nicely in the bearings.
gbritnell
S

Very Nice work, an excellent start. I'll be watching as you progress.

I just finished a Poppin vacuum engine on Friday and the little crankshaft was difficult and it only has one journal. I bent it on the first try and ended up making a built up crank.
R

Thanks for the comments guys. I will be back at it soon and will make more posts as the crankcase progresses.

I'm commenting here more for me than to say anything important. The idea is that the HMEM will send me an email when you get back to it and update, so I can keep up with your progress. I bought George's plans for the Holt, but I've told myself to finish my first IC engine, a Webster, before I move on to a four cylinder.

For cutting the crankcase I will be using the manual CnC method “crank and crank and crank” I bought a 24” length of aluminum 6061 2.5” by 3.5”. I will be able to cut all the aluminum parts with this and a little chunk of material to spare.

I started by facing one surface on both the crankcase and the pan and then fixing them together with two sided tape.

From there I surfaced all the other sides making a block with parallel sides and squared ends.

The next step was to drill and tap for the screws that hold the two case halves together. As you can see I started roughing out the outside shape for the pan. 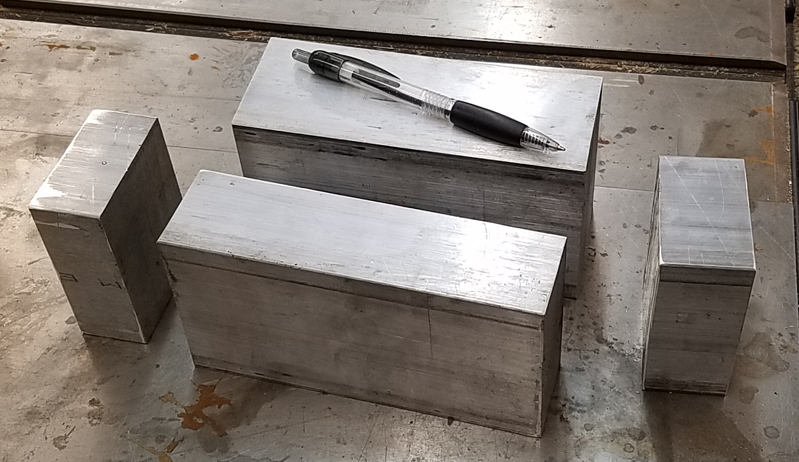 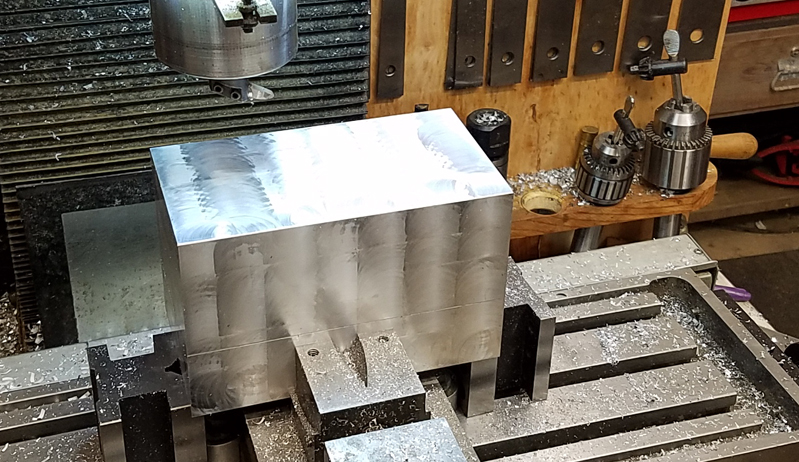 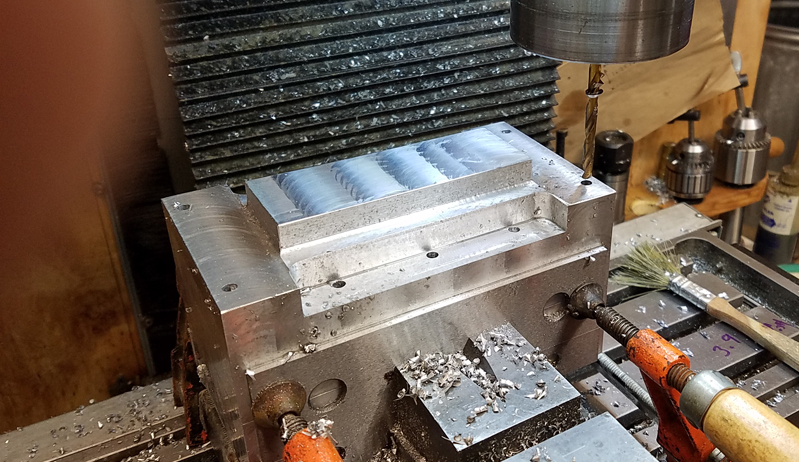 With fingers crossed I clamped the block on the mill and set about drilling for the crank bearing and the camshaft. Its over 6 “ to the far end so I had to flip the material over and repeat the above steps. The holes were then reamed to size from one end only. Surprisingly everything lined up and a test shaft that has a close slip fit passed trough and could be turned with little force. I then cut the pockets for the crankshaft end bearing holders.

The drawings showed the end bearing holders with some added detail. I elected making the part in two pieces to simplify and to make it easier to get a nice machined finish. 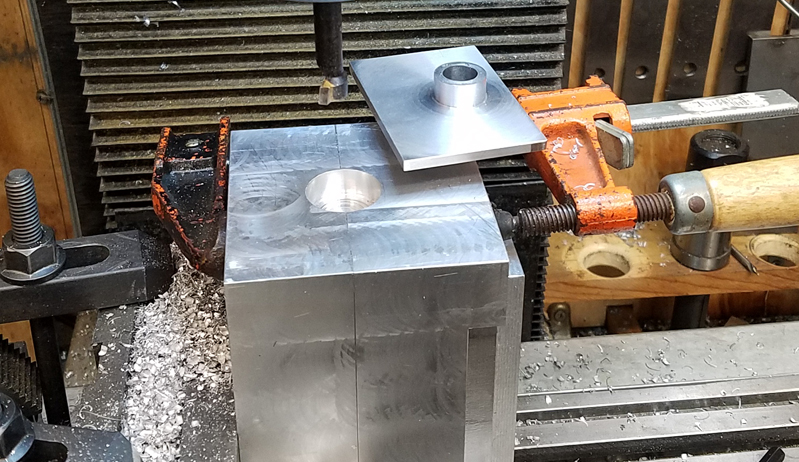 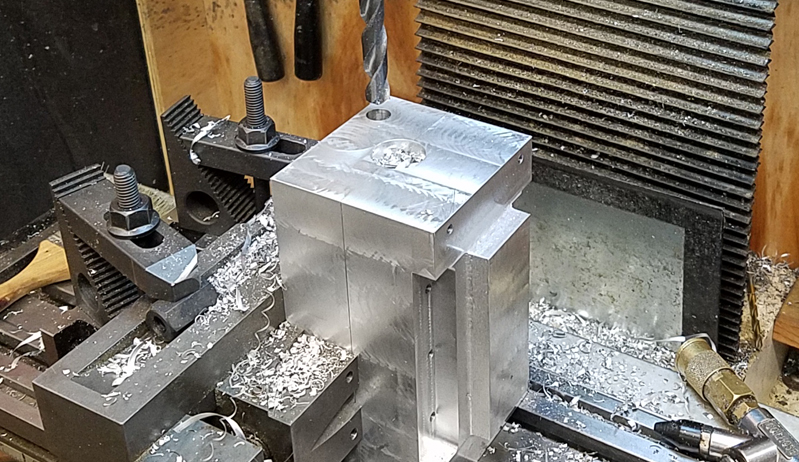 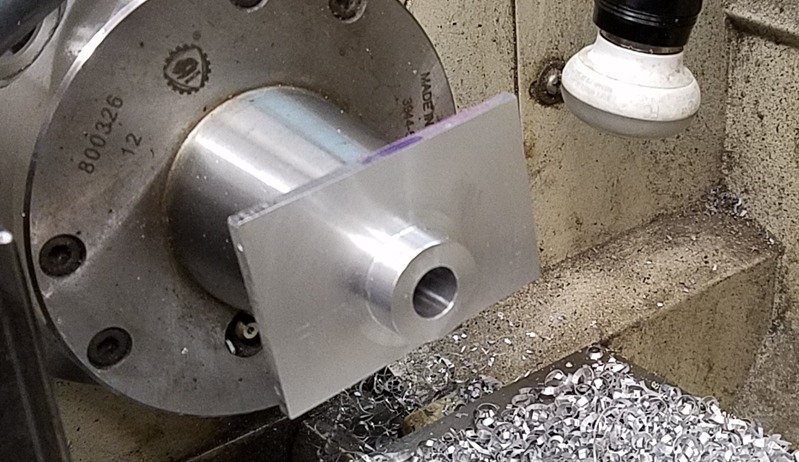 The bearing holders are reamed to to a close slip fit for now so I can use my test shaft to hold the mounts to the block accurately for drilling and taping.

I have been sweating getting the block to this stage. Getting the shafts trough straight and true was one of my biggest worries for this build. I have a long way to go but I think its all down hill from here. 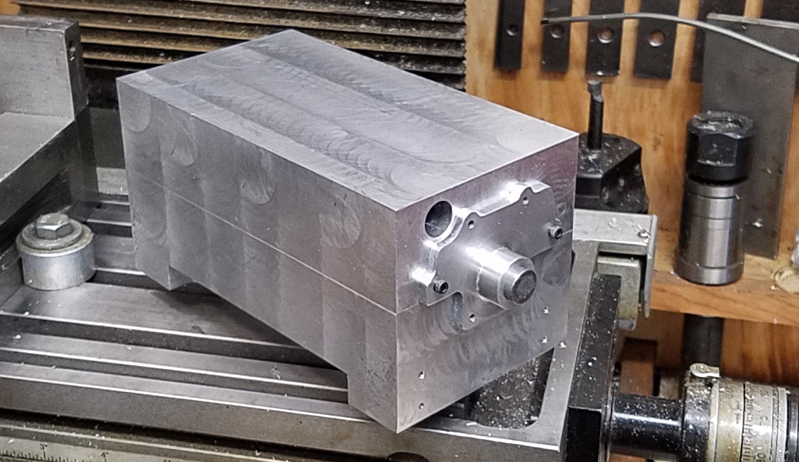 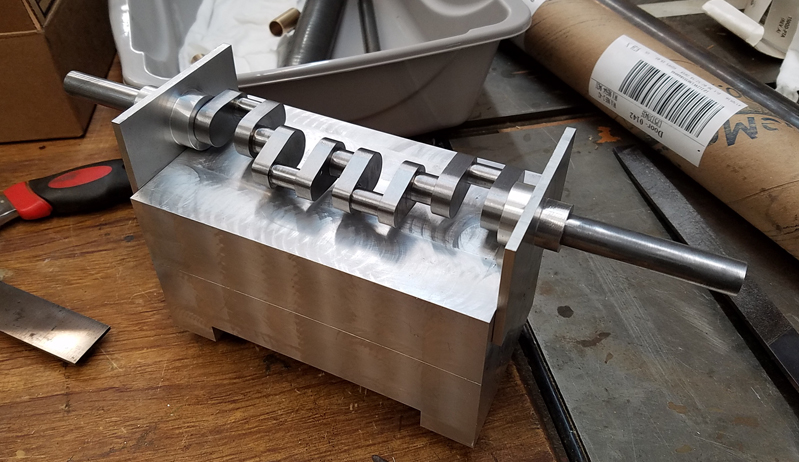 Now I'm off to start hollowing out the block, shaping the exterior, drilling and taping holes and such. I will post updates as I go.

I'm following along. Great work so far! Should you have any questions please don't hesitate to ask.
gbritnell

gbritnell said:
I'm following along. Great work so far! Should you have any questions please don't hesitate to ask.
gbritnell
Click to expand...

Hi George, just a heads up. Your drawings are missing a gear.I figured it out to be a 1" gear with a press fit.

I will check it out this evening and get back to you.
gbritnell

My bad George, My tired old eyes missed the note about the gear. I should get thicker glasses.