Luck of the Dumpster

I was back in the machine shop at my workplace and in the scrap bin I found eight ball screw slides. The longest has about a 23" stroke.

I asked my boss, and he let me take them.

After some investigation, they've been sitting on a shelf for years and they just decided to scrap them. 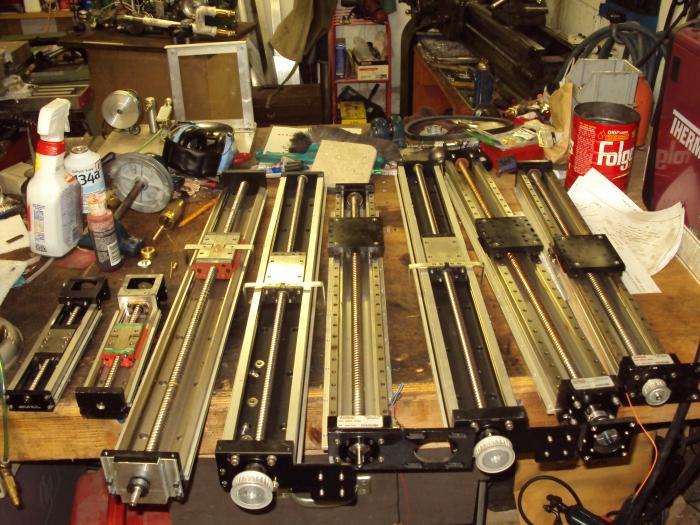 In the time honored tradition of the Home Shop Machinist board, let me be the first to award you with the "You Suck" honor!

(Congrats on a huge stroke of luck!)

Definitely jealous!! Looks like you are half way to a nice CNC router there..

vederstein said:
I don't know what I'm going to do with them,
Click to expand...

Looking at that photo of your shop, you're going to have trouble finding a spot to store at least 3 of those. I have the perfect spot to store them: under my ol' all-thread rod equipped router!

I think I'll probably make a CNC router. I'm not a woodworker, but my brother and brother in law are. I'll probably give it to one of them when done. It'll be a nice winter/spring project.

Going this route will ease my wife's mind for a while. I was going to get a 3D printer and get set up for an aluminum lost wax foundry. (But I have no experience with casting).

As for the remainder, I see a CNC or Ardunio controlled bubble machine for the 2017 Maker Faire season.

Following are some pics of the progress I've made using these slides to build a CNC router.

If there's interest, I can continue posting. If not, I can stop. It's no big deal to me.

Anyway, except for the 4" aluminum channel and wood I purchased for the Y-axis slide mounting, I'm building this thing with materials I have laying around and without any plans. It's just kind of falling together as I go. (I'm amazed at the quantity of aluminium barstock I've accumulated. Some of this stuff I didn't even know I had). 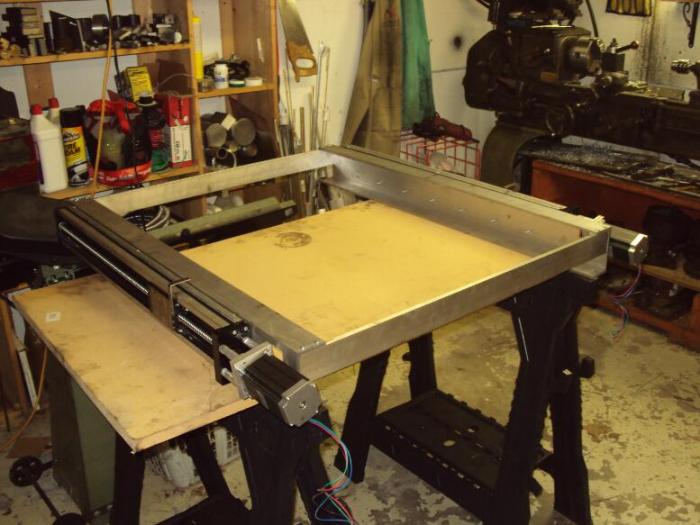 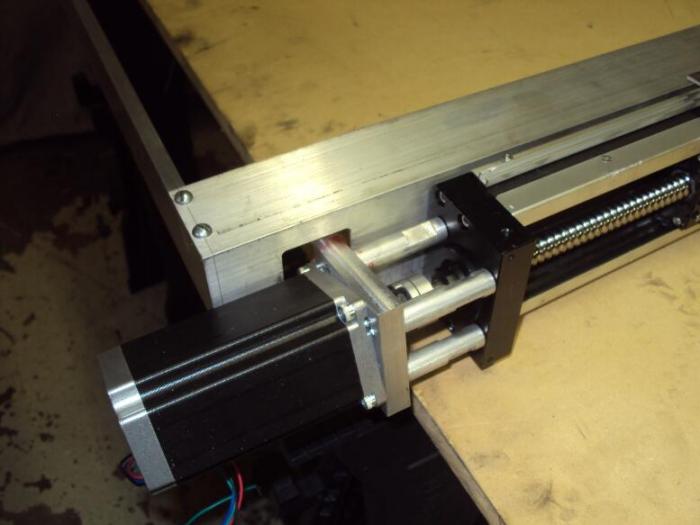 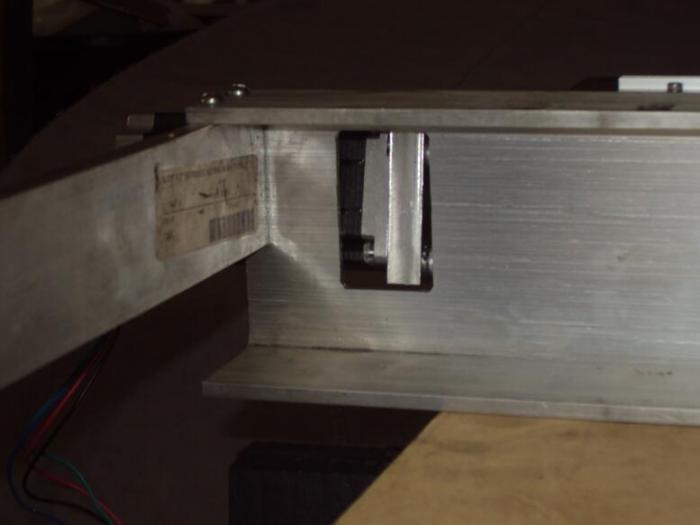 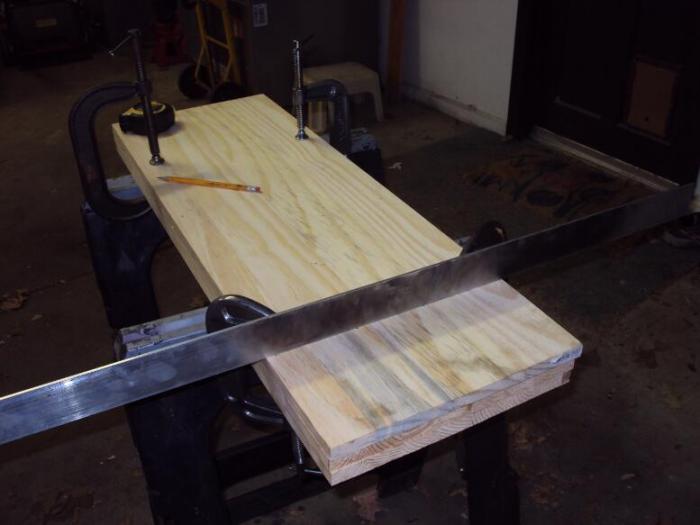 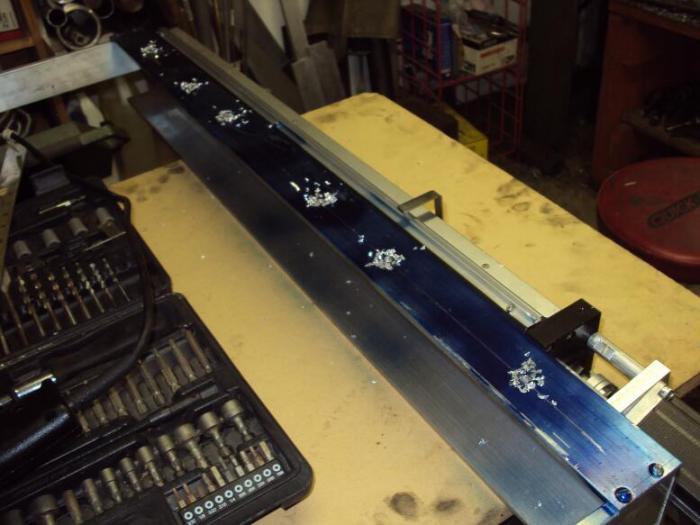 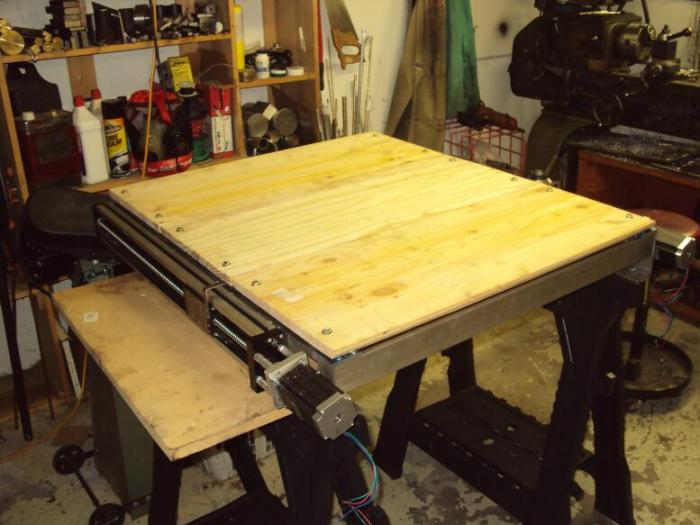 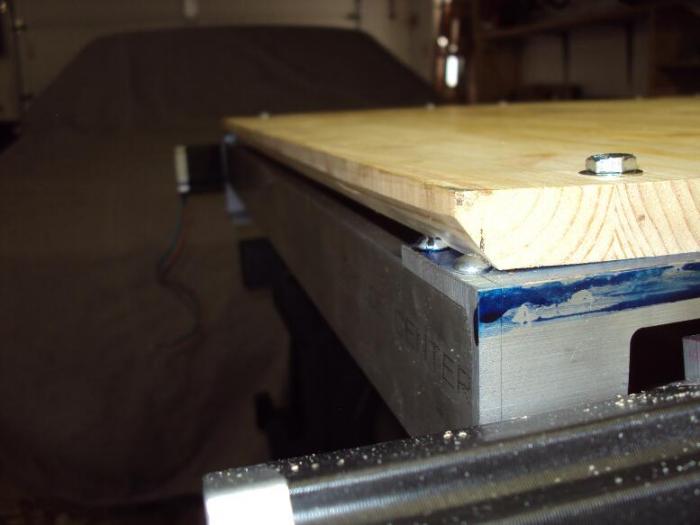 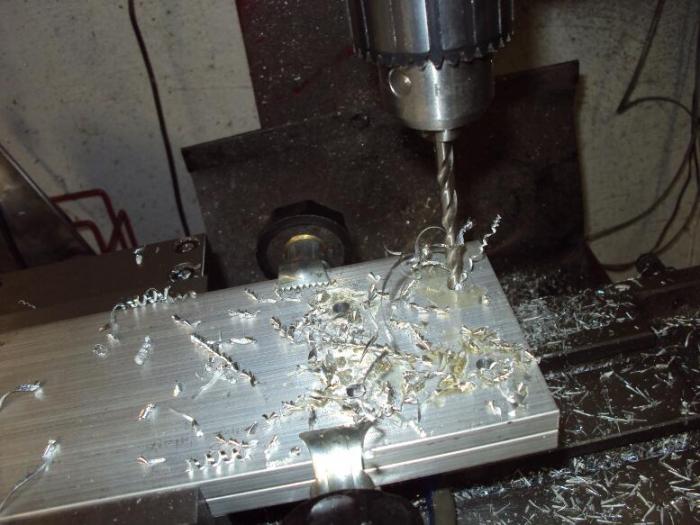 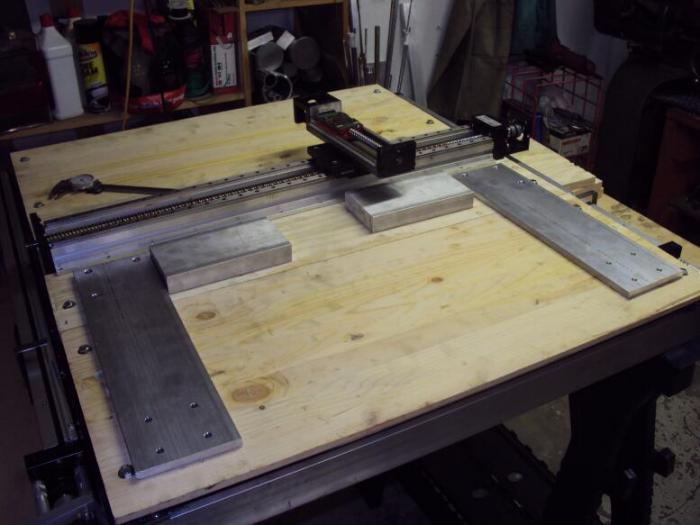 vederstein said:
Following are some pics of the progress I've made using these slides to build a CNC router.

If there's interest, I can continue posting. If not, I can stop. It's no big deal to me.
Click to expand...

Heck yes there's interest! Keep it coming. I need to see lots of CNC construction at the moment to keep me motivated. I'm itching to move forward with the upgrades to my router but my neighbor/buddy & his company have other plans. They give me little machining jobs now & then but this latest batch is taking up all my nights & weekends. Oh well, gotta make hay while the sun shines. I can use the extra income to buy more toys!

You will want to keep it!! Routers are not for wood alone. If built rigid enough and fitted with a cheapo 2.2kW water cooled spidle it will happily munch it's way through aluminium.
Keep posting
John

The past few days have been productive.

First I drilled/tapped the blocks which will mount the X-axis rail.
The to see my progress, I C-clamped the X-axis in place.

Later I'll transfer punch the mounting holes in the slide to the blocks. Then I'll drill/tap the blocks to mount the rail permanently. 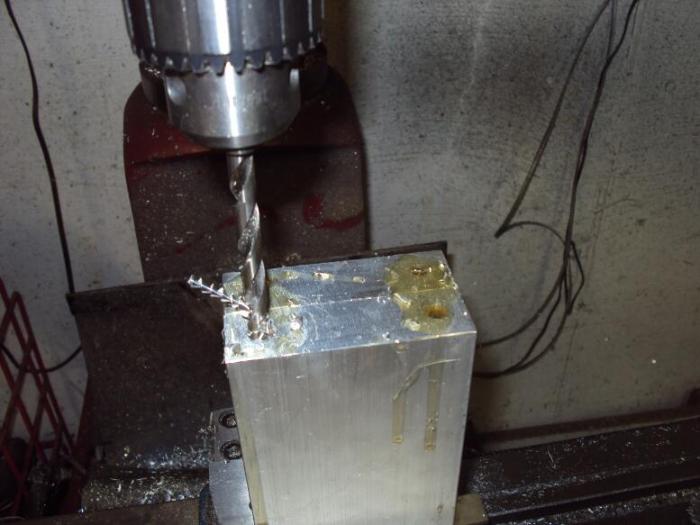 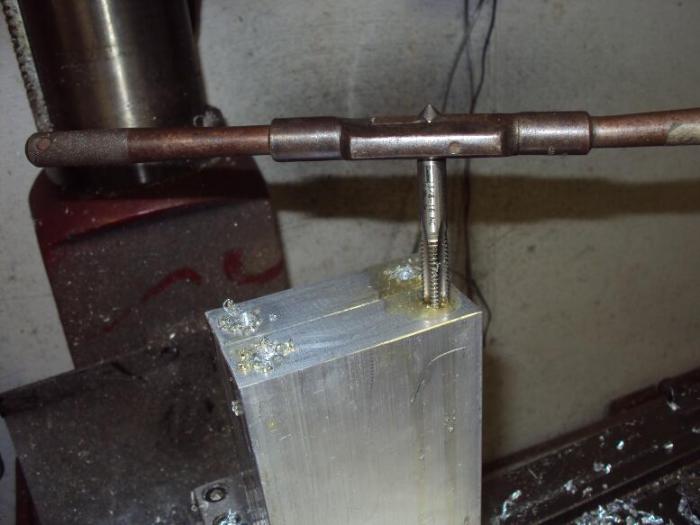 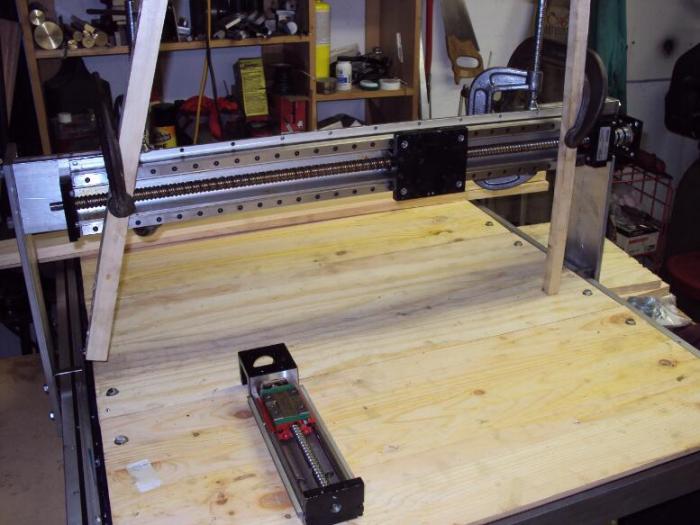 For a change of pace, I started work on the electronics.

I purchased the largest junction box enclosure I could fine at Lowes. Unfortunately what looked big in the store wasn't so big with all the components I needed to install...

The box is deep, so I made a two layer box. Please don't laugh at the pictures, I'm not an electrician, but at least I did apply labels to the wires... 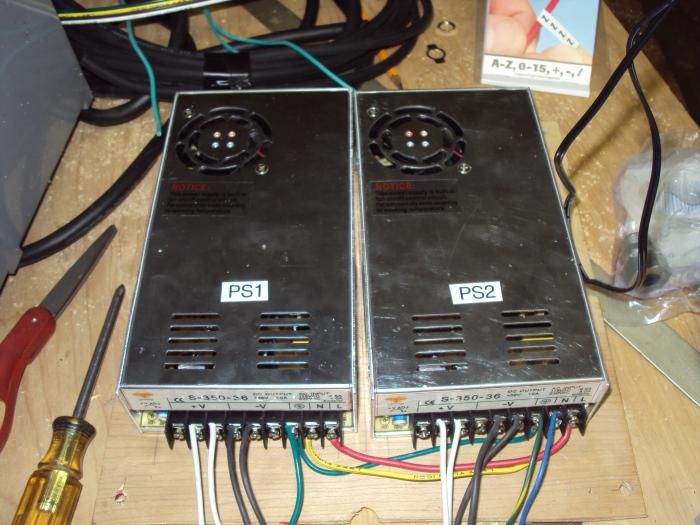 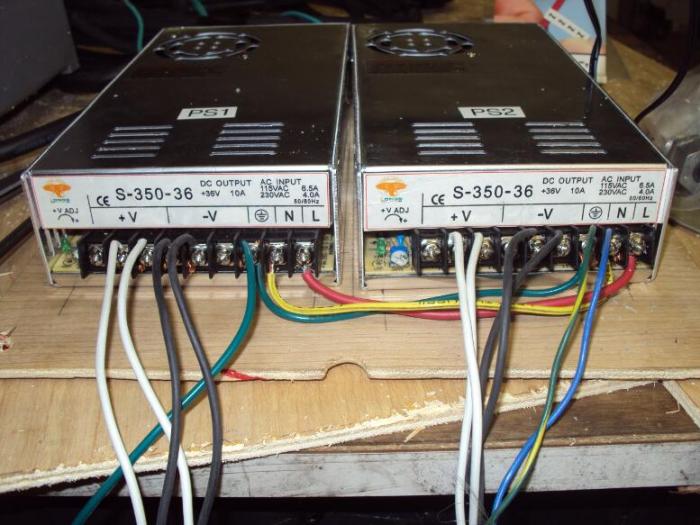 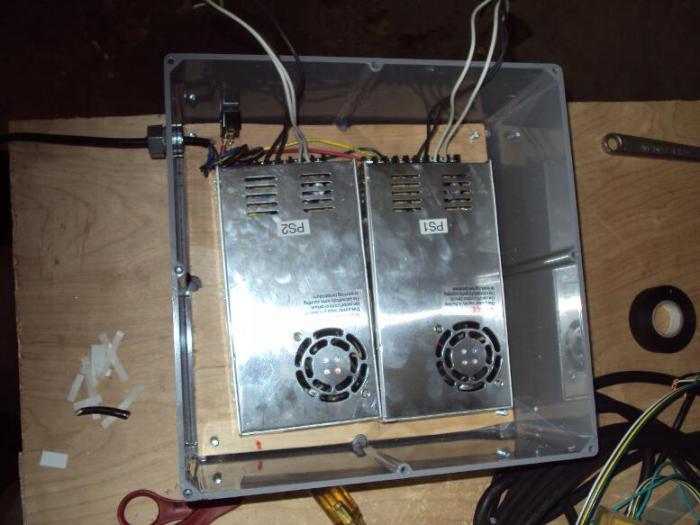 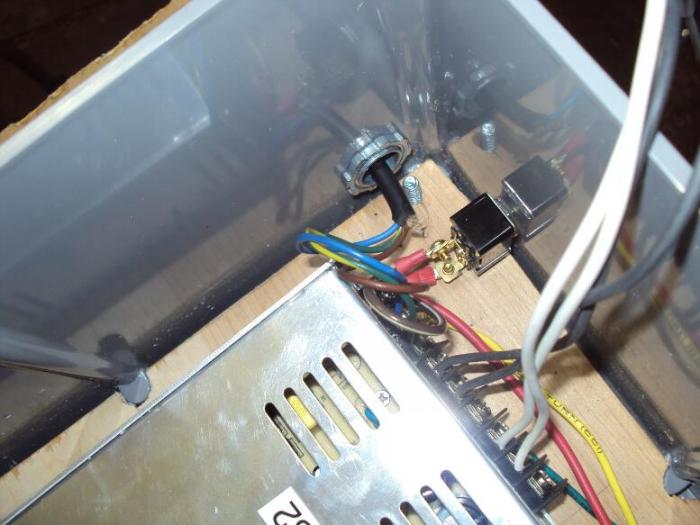 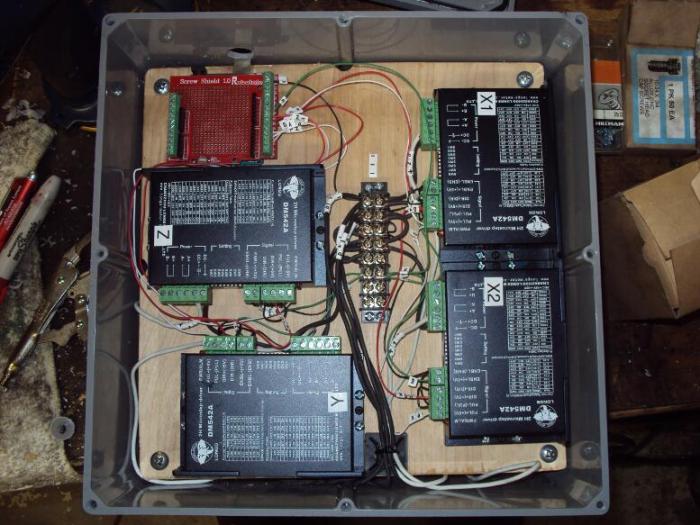 No laughing here Robert, looks great to me.

Man, that X-axis ain't lacking for power! Two manly drivers and 2 manly stepper motors. You could add a log-splitter attachment on that!

Just kidding, it looks great. When you get it up & making chips I'd like to hear a report on how well those drivers work for you, I'll be purchasing 3 myself before too long.

So you're using the Uno instead of a dedicated PC & Mach or LinuxCNC? Man, that's way above my tiny knowledge level! I'll be interested to see how that system is implemented.

I purchased I four axis kit from Long's Motor Ebay shop. When I bought them it was $259. Now it's $300. It's only been about five weeks difference.

I have a Seig X2 mini-mill that I converted to CNC running linuxCNC. I'm going Ardunio here so anyone can install the software on their computer/laptop and run the machine. The Bcnc software spoon feeds G-code to the Arduino which is running GRBL. It connects via usb, so no antiquated parallel port is necessary.

vederstein said:
....so no antiquated parallel port is necessary.
Click to expand...

Hey, I resemble that remark! Parallel ports on all 3 of my machines.

I do envy your grasp of Linux. I'd have PathPilot on my lathe in an instant if I could but alas, it's not gonna happen unless a Linux wizard moves in next door.

I didn't know there was a software called Path Pilot. Upon some research, it's a fork of LinuxCNC. As far as I can tell, it's the LinuxCNC back end with a PCI card instead of the parallel port and a new front end (gui). As such, it's subject to the GPL v2 open source licensing. That means Tormach must make the source code available.

Apparently they're meeting the requirements of the license without really supporting the open source goal of the license. You have to make a request in writing to Tormach then they will send you the code. For them it's not in their interest to openly divulge their intellectual "property." But then the code base never was their property in the first place. If I remember correctly, LinuxCNC started as a government research project.

Also, if it's the conversational programming you crave, LinuxCNC has that too with the NGCGUI addon. The addon has mill, lathe, and probing applications for it. Hell, I've written a couple myself (a teardrop shape and routine to mill a true ellipse).

So based on what I've read and viewed, I don't see a big advantage to Path Pilot over LinuxCNC.

vederstein said:
So based on what I've read and viewed, I don't see a big advantage to Path Pilot over LinuxCNC.
Click to expand...

Thanks very much for the detailed explanation. My interest in Path Pilot came about through watching YouTube videos of it in action. It looked so much easier (to me) than LinuxCNC and I thought there was a possibility of an easy installer. With my meager computer skills, Path Pilot sounded like a way to sneak into the Linux world without the pain but alas, tisn't so. I had tried running Linux on my little Denford mill long ago using the standalone CD but it may as well have been Cyrillic. I got the main Linux GUI going & ran the tests but everything was way over my head when it came to making steppers actually work.

At 2 weeks shy of turning 69 years old, a completely new way of computing just ain't possible; but I can watch you & other wizards having fun with Linux! Don't get me wrong, I'm making plenty of great parts with Mach, I just have to put up with some "features."

Starting on the Z-axis slide:

First was to make a plate to adapt the X-Axis carriage to the Z-Axis frame. Note that I added several extra holes in the plate. This allows adjustment of the Z-axis height.

The reason is that unlike many CNC routers I've seen on the Internet, I purposely kept the distance between the table and the X-axis slide shallow, about 7 inches. The reason is threefold:

Once the Z-axis was mounted, I started an adaptor plate to mount the Z-axis motor to the slide. The motor is way big for this slide, so I'll turn down the amperage to limit the motor. 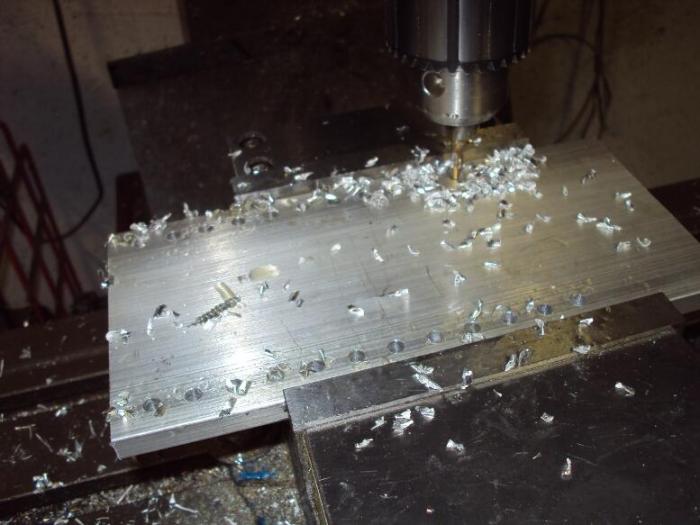 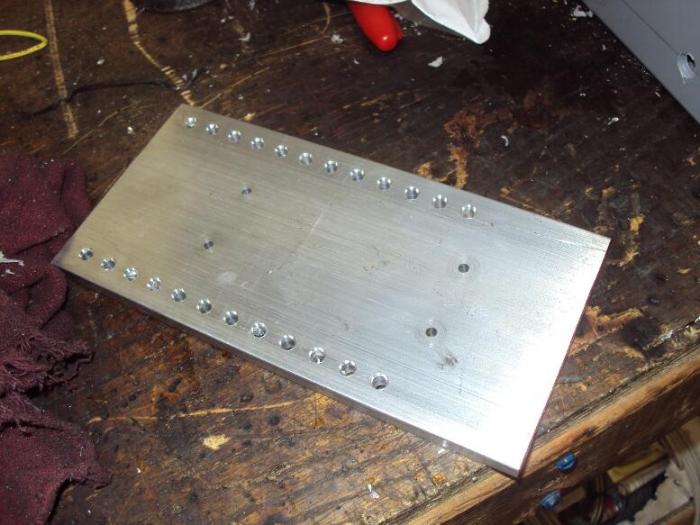 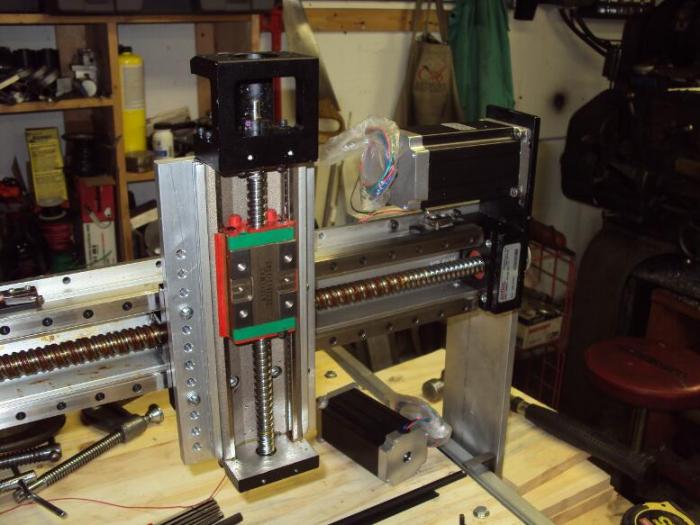 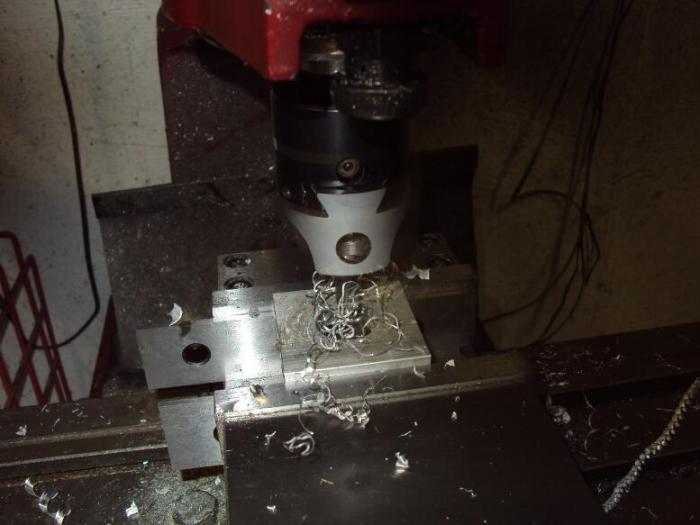 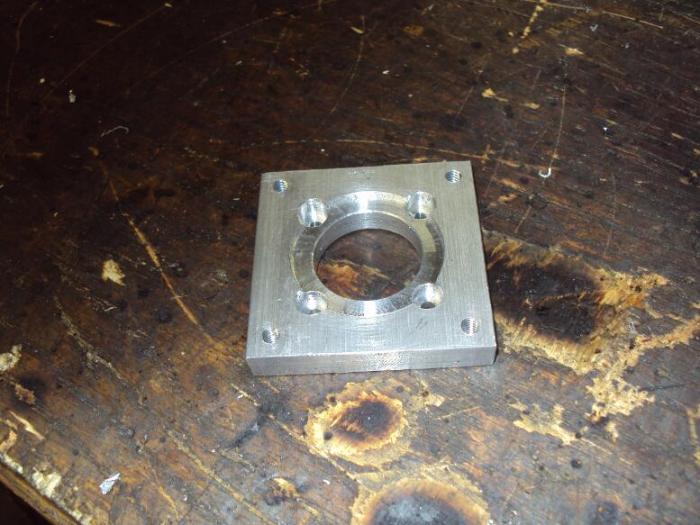 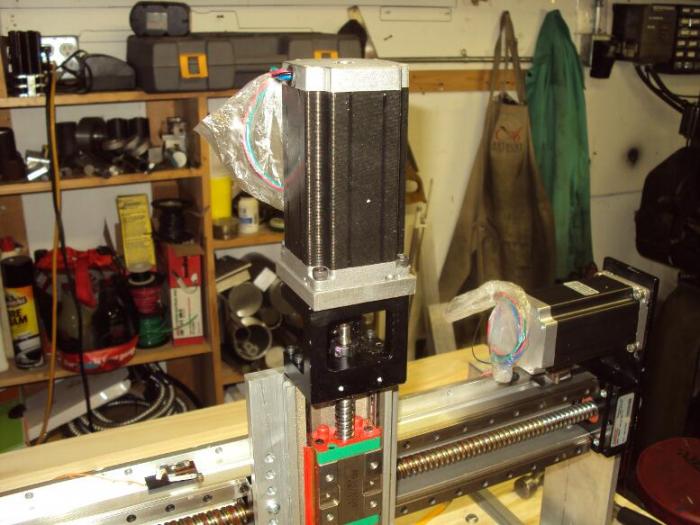 I really like your adjustable Z-axis mount idea, thanks! One of the uses I've planned for mine is to mount up my Tap-Matic clone tapping head to tap lotsa holes on occasion. After seeing yours, I think I'll make mine with several Z-mount positions with locating dowels for repeatability. One location for the milling spindle, one for the router & another for the tapping head chucked in the mill spindle.:thumbup:

With the recent U.S. holidays, I haven't made as much progress that I normally would have. But there's been some progress none the less...

First I bored a 4" diameter piece of roundstock to mount the router I'm going to use as a spindle. It will eventually become a split ring clamp, but I haven't gotten that far.

Second, any project of this size and complexity will eventually involve things that just aren't enjoyable. I've hit that point. I'm no fan of soldering wires, but its just one of those things that must be done. Unfortunately, there's a lot more soldering still to do... 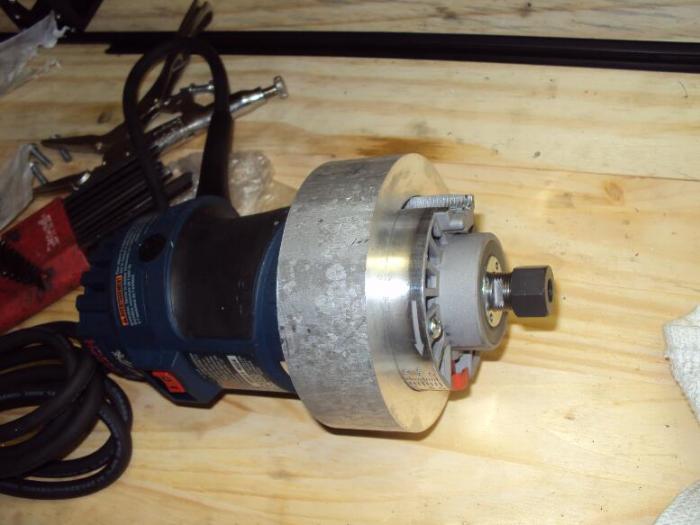 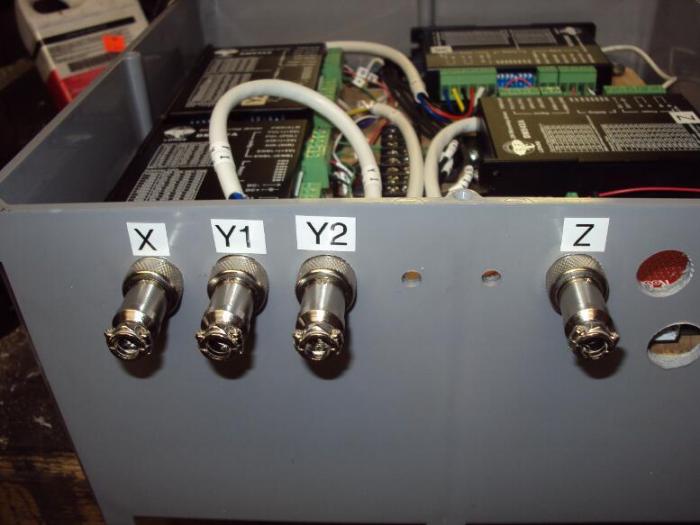 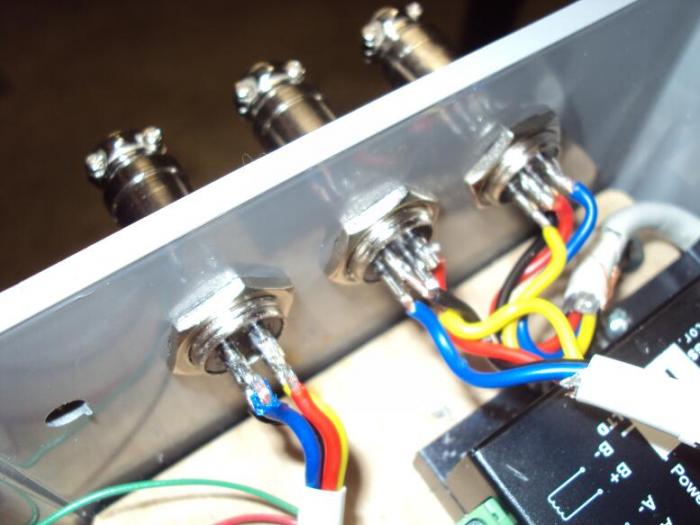 Yup, soldering those little XLR pins is not my idea of fun! When I get to that point on mine, I'm going to try these; I think these are easier to work with although a little pricier. The clones aren't bad price wise: http://www.ebay.com/itm/10-x-Speakon-Plug-4-Pole-Conductor-Speaker-Pro-Audio-Cable-Male-Connector-/262703913974?hash=item3d2a5f9bf6:g:EzwAAOSwWF5XLn1n
2
You must log in or register to reply here.
Share:
Facebook Twitter Reddit Pinterest Tumblr WhatsApp Email Link