stanstocker said:
I'm no doubt being dumb, but what holds the brass piece to the spark plug itself?
Thanks,
Stan
Click to expand...

You are right Stan, could be an issue. I did have a couple dancing around on the sparkplug while running. A solution was to give the electrode at the insulator a drop of Super Glue or epoxy to dry ......then seat the terminal upon.. That film was enough to give the base a wedge upon the terminal to hold it in place. A superior mechanical method is to drill the terminal below the wire for a eighth inch long 4-40 set screw to seat in the waistline of the CM-6 electrode. Then you can position on the sparkplug the terminal regardless of any flex or twist upon it by the wire insulation.
....Dave. 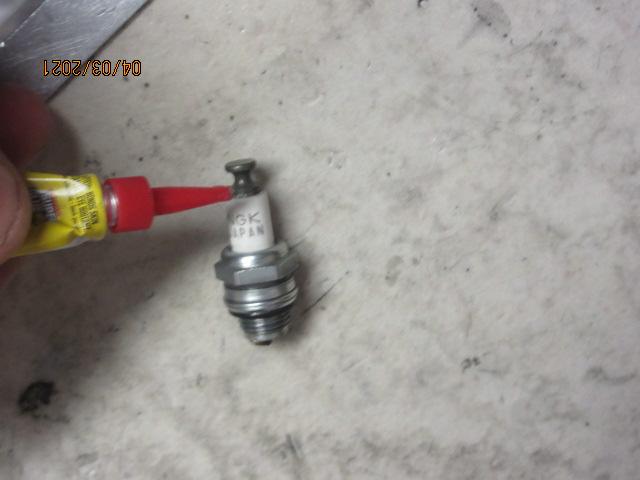 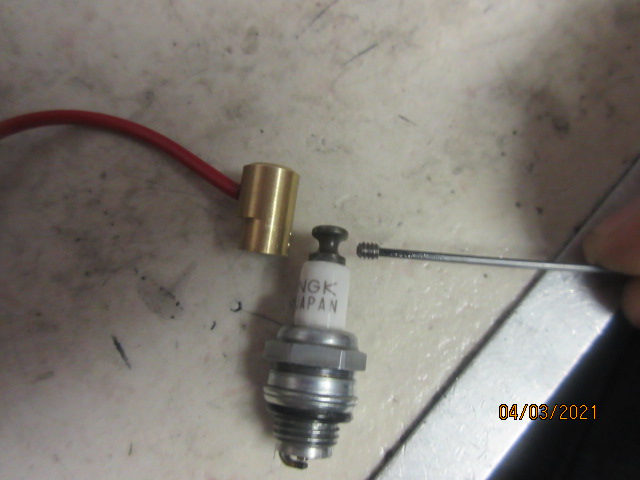 Steamchick said:
I love your enterprise and workmanship. For the plug caps: Give them an insulating cover by moulding hot-melt adhesive (Mind you don't burn yourself - it is HOT!). That will also support the wire from fatigue failure... (Things will vibrate!).
I trust the insulation is proper High Voltage to cope with ignition voltages? - It looks like regular domestic to me .................
K2
Click to expand...

Thanks Steamchick. I am not having negative issues with hardware store AWG 14-16 for high tension leads to the sparkplugs. Holds up well with the high volts and low amps. Either AA batteries or my 2Amp power supply run the ignition.
V

I simply turned down the terminal of the plug and threaded it to some rational size, then used a knurled nut like some old engines. Plug wire has an eyelet. Looks good on some engines.

For spark plug leads I've used test wire meant for VOMs etc. Find it on google or ebay. Its real flexible, finely stranded and well insulated. I used to think spark plug wire needed to be large gauge to carry the high voltage and I then wound some coils and realized the secondary windings, supplying the plug voltage, are only a few thousands in diameter. High voltage really low amperage.

Vietti said:
I simply turned down the terminal of the plug and threaded it to some rational size, then used a knurled nut like some old engines. Plug wire has an eyelet. Looks good on some engines.
Click to expand...

I like that idea too Vietti! Converting a spade clip electrode to a threaded one with an eyelet and nut.
S

Working on HT cables back in the 1980s when I worked in Design in Automobile manufacturing...
You don't need copper conductors for HT cables.
There were 3 types. All were designed to dramatically reduce the radio broadcast (noise) from the HT cables - that act like antennae for the radio noise discharged when the voltage rises or falls rapidly. This electrical phenomenon is often missed by mechanical engineers, who mechanically connect the terminals with wire.
The 3 common types:
Now on a model - like this square 4 - instead of having between 1 and 2 feet per lead acting as an antenna, x 4 antennae, there are leads of only a few inches, and the voltages are lower. So the broadcast energy (Radio noise) of an unsuppressed electrical system will not be anywhere near so big as a 1950s 4 cylinder car that probably had unsuppressed HT leads/system.
I know in the early 1970s, when my suppressed plug-cap failed on my 2-stroke single motorcycle, I fitted an unsuppressed plug cap, and my father could hear me coming from about a 1/4 mile away from the noise on his radio! He could identify the gear changes by the frequency change. Today we use FM and digital radio that is immune from this (I think?) and all cars are well suppressed. (By law...).
So my message: You can use the least amount of copper you have in the wire without affecting the spark, but do need good insulation - I recommend more than "domestic wires" because it can puncture as it is not designed for the HT voltages being applied, if it touches the metal of the engine. You'll probably "get away with it" at 1/4" to 1/2" air clearance. - But do you have this at the end of the wire/head of the plug? - Hence I suggest covering with an insulating material - like the polythene or other polymer in hot melt adhesive. Apply a blob, then when it is just about cool enough to touch, squeeze it to a desired shape over the metal cap. If you have problems running the engine, crank it in PITCH DARKNESS and look for discharge (corona) from the wires and plug caps at this zone... the likely failure. One fix may be as simple as domed tops to the brass caps. (It reduces the electric field strength locally compared to sharp corners).
Remember, making something that works is a mix of "good design and manufacture" and "getting away with something that isn't right". We ALL do it ALL the time, so not a sin, and we only advise to try and help. And a caveat: "Help" is only useful when you need it.
Have a nice day with an excellent project!
Thanks for sharing your knowledge and designs.
K2
S

Atmospheric intake valves seem to be winning in my designs. Even more so integrating into SQUARE FOUR being to the inboard of the cylinder heads. Space being at a premium here for another cam drive. 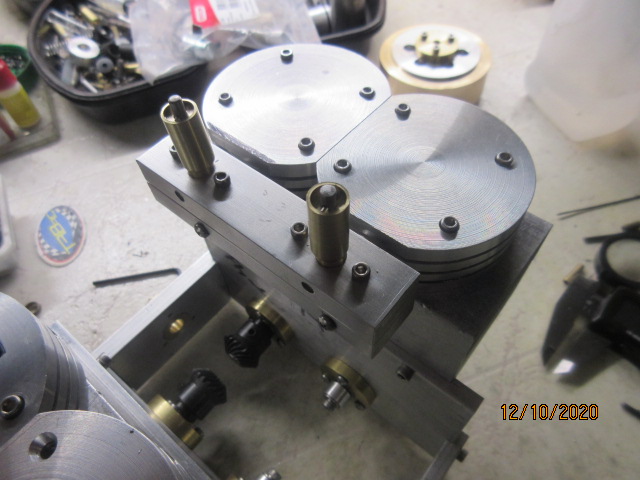 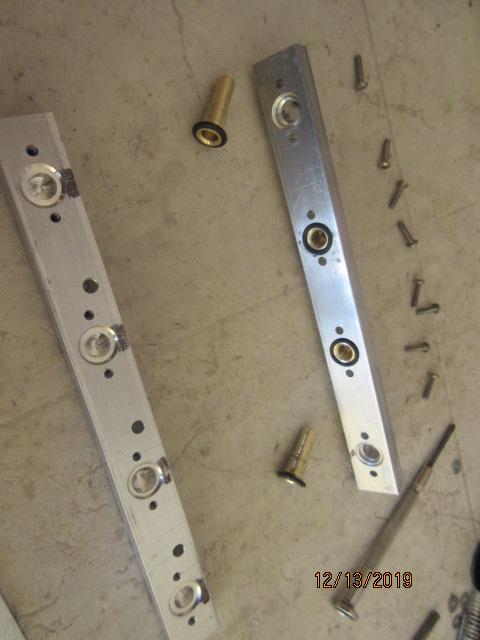 Pair of aluminum flat stock pieces (previous model shown) sandwich the valve guides sealed by O-rings between as well as the mounting to the heads with a brass tubing between these valve blocks and head. 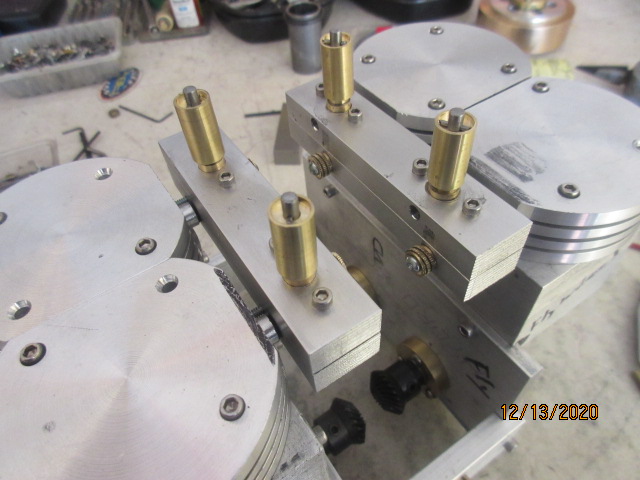 Long machine screws adjacent to the ports hold the blocks to the heads. With the intake plumbing in place, there is no room for a screw driver or Allen key. To get a grip on the screws, I straight knurl across 5/16th threaded rod. Drill and tap 6-32. Cut to a short length and thread up to the head of the machine screws with epoxy to lock them on. Now I can tighten down with my index fingers! I use the same finger nuts setting rocker arm clearance too.
I'm going to need some short 90 deg. elbows right out from the carburetor port side from here. I can make them.....or see what my friendly ACE hardware store has to use.........

From RAINBIRD Irrigation Systems, I find some 90 deg elbows that fit in nice to the valve blocks the inch and three-eights distance between them. They are the right kind of rigid plastic for use here. 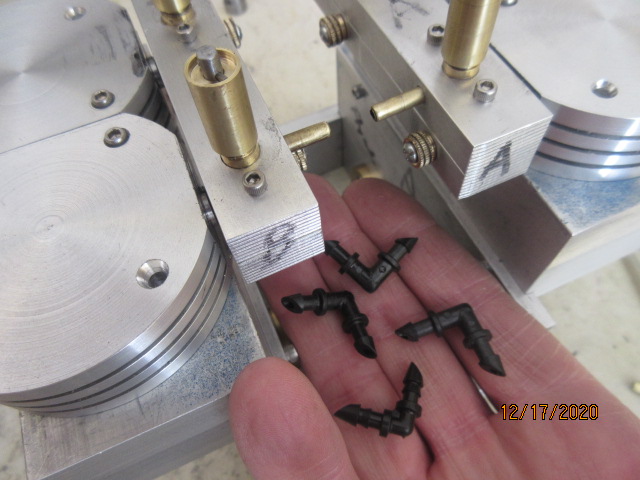 Just cut off the barb and press fit into the port up to their flange. Aim them to the front of engine. 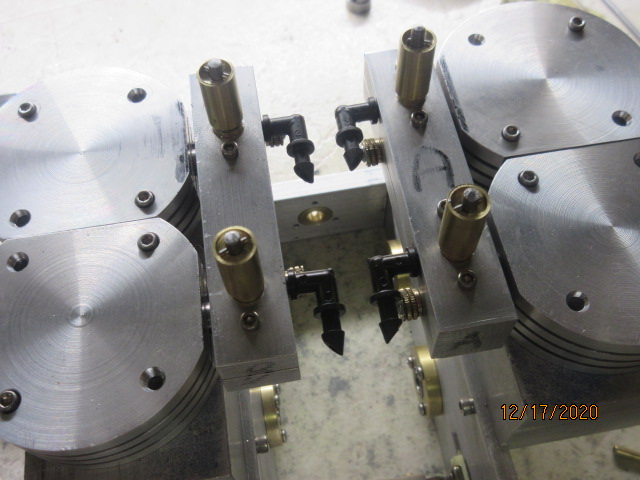 Cut up some pieces of vinyl tubing to bring up to the intake manifold. Vinyl pretty heat sensitive so most likely substitute silicon tubing for the job. 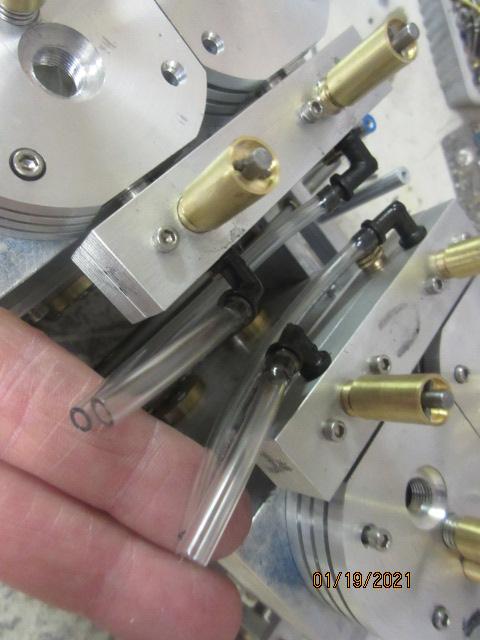 Intake manifold here of black plasticky stuff is drilled for the plenum. 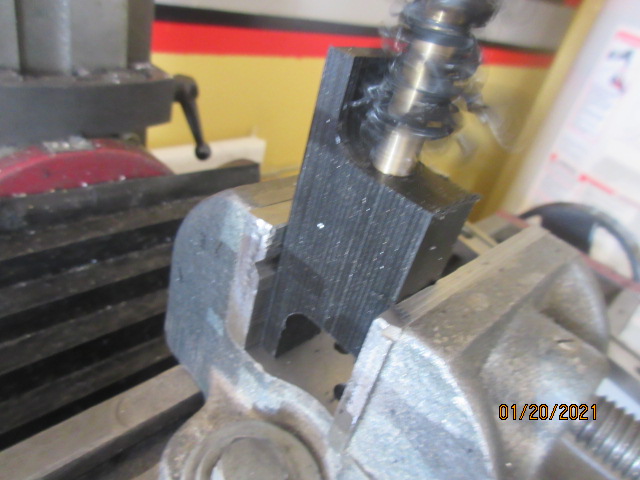 Bolts onto the lower valve block pieces with a couple of spacers. An O.S. carb will feed the engine. 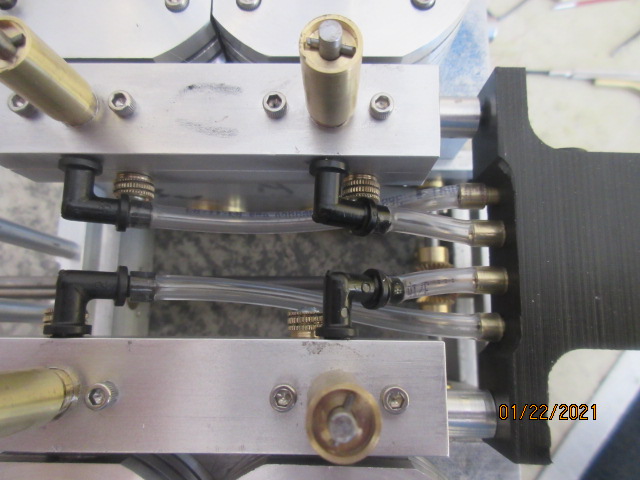 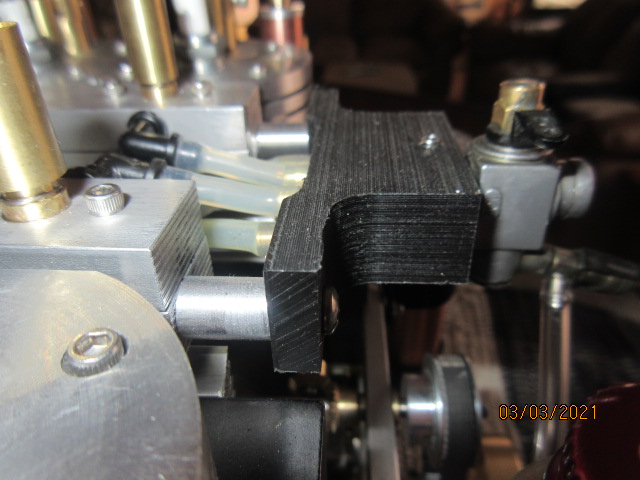 Natural metal or black satin, I like contrast with dark deep color. 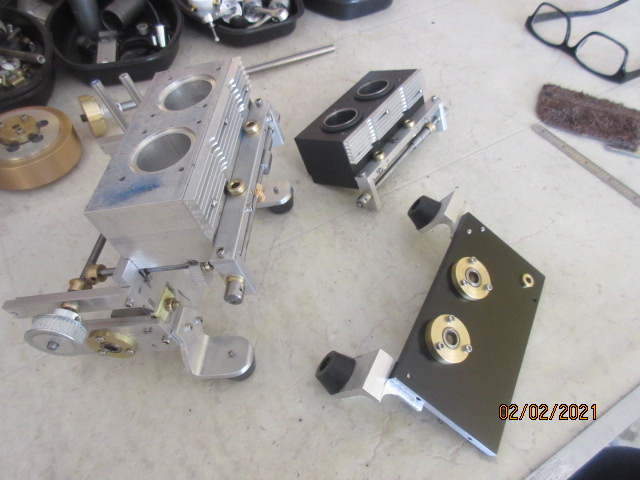 For radiators, the upper part of engine blocks get the fin cladding bolted on each side. 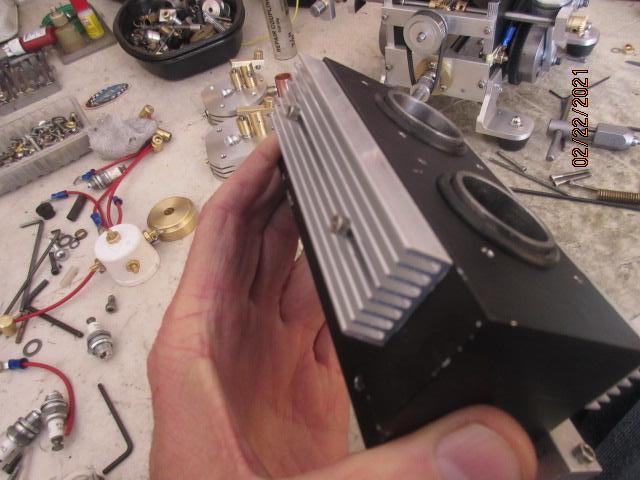 I stumbled onto this build on Sunday, and it's rather interesting. Is this your design? Designing it as you build it or designing each section? Or are you building to plans?

I find your use of what appears to be plastics, 3D printed plastics(?) and metal together interesting, too, as a guy with a new printer. The hose barbs look to be injection molded while the plenum looks like it's printed.

I'd be interested in anything you'd say about the design; sizes, bore and stroke, that sort of stuff. They look to be about 1" pistons, sleeved cylinders, CM-6 spark plugs...

Thanks CFLBob. The S/F engine is my free standing, open crank design of a rare configuration. I do not make plans or prints and no CAD but have an idea of "what goes where" integrating the individual parts as the build progresses. My purchased items include the timing set, ignition, gears, piston rings, cylinder liner stock, spark plugs, dist caps and carbs.
The intake manifold is Delrin cut to form. In the build log you see the 90deg fittings are a hardware store item. B&S is 1 inch. Finishing up the build log this week followed by SQUARE FOUR's presentation. You can find build logs here on HMEM and can Google, "longboy engine" to view engines that are just a little bit different than what most hobbyists make being self conceived efforts. In S/F and previous models built, you see heat sink materials for cooling and remote valve blocks for intake and exhaust.....little ideas that work!

Square four engines being a pair of 180 deg. crank twins, its cylinders in unison rise and fall diagonally. 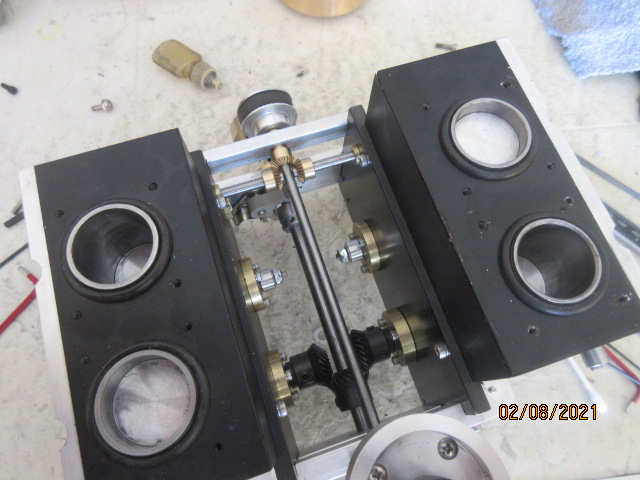 The firing order is 1-2-3-4. Though I built the engine numbering the cylinders starting with the front left, the distributor with its gear drive rotates counter clockwise. The #1 cyl. is now the front right. This allowed for a symmetrical layout of the spark plug wiring from the cap. 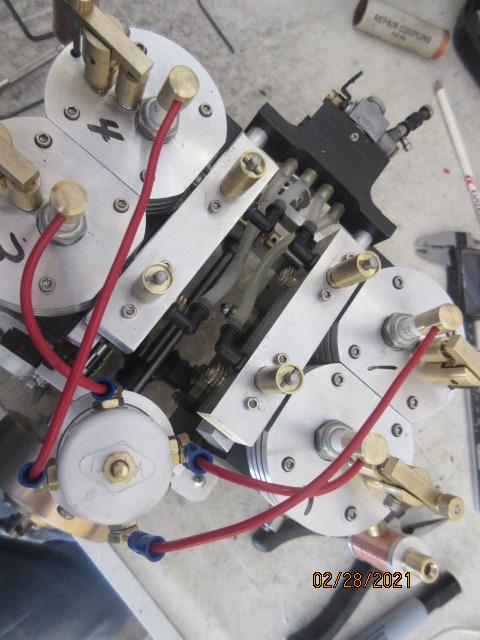 A 72T belt takes care of the cam drive. With sprockets instead of gears for the cams, that belt would have had around 400T. 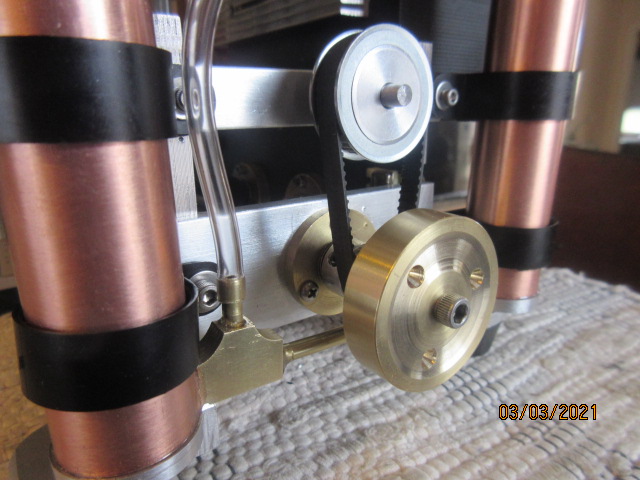 More cylinders need more fuel capacity and up front I was able to have twin on board vertical fuel tanks totaling about 2 OZ. SQUARE FOUR idles along for over 20 minutes per fueling. 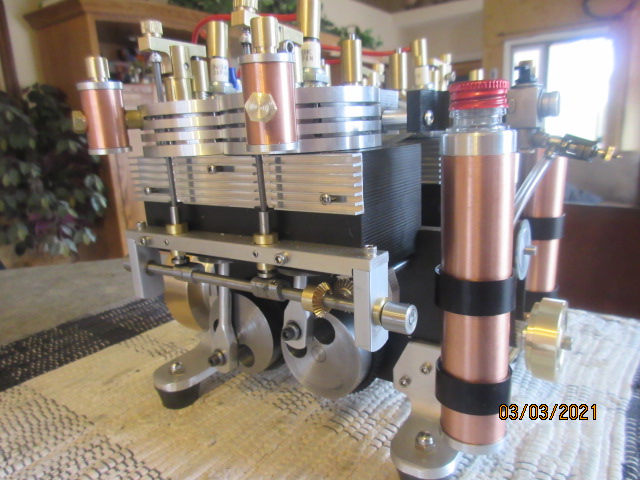 Copper tanks and mufflers, the red metal along with white and yellow metal.....my kind of jewelry!

Thanks for joining me in an introduction to my new engine, Longboy's "SQUARE FOUR" Model Gas Engine! 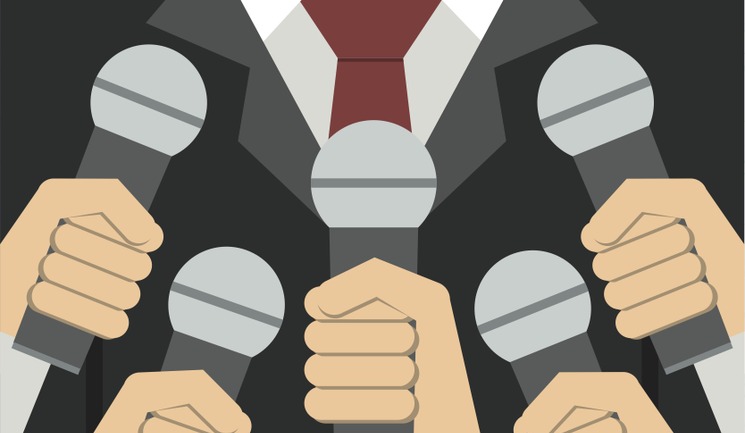 Only found in the motorcycling world per my research, the Square Four found its way as a production motorcycle (Ariel), a racing motorcycle (Suzuki) and a production proposal motorcycle (Kawasaki). Now in a Google search on the web......as an obscure model engine, as are its full sized examples. 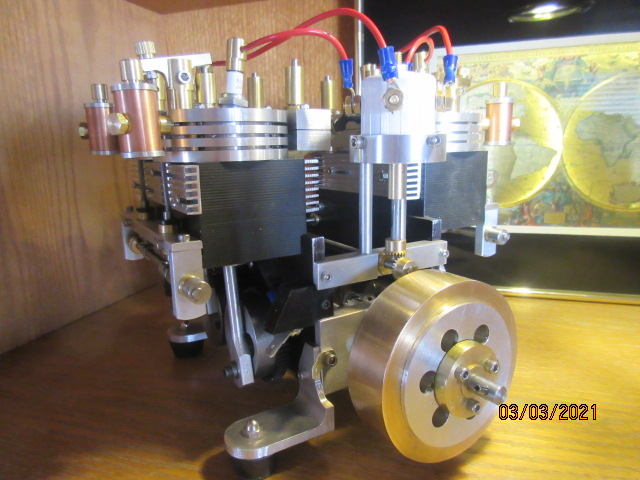 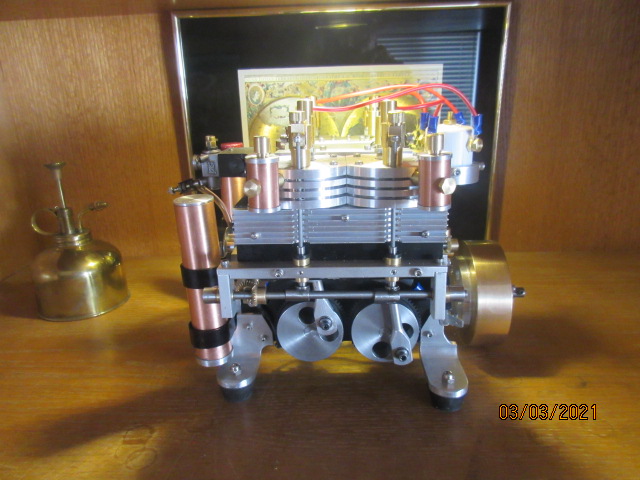 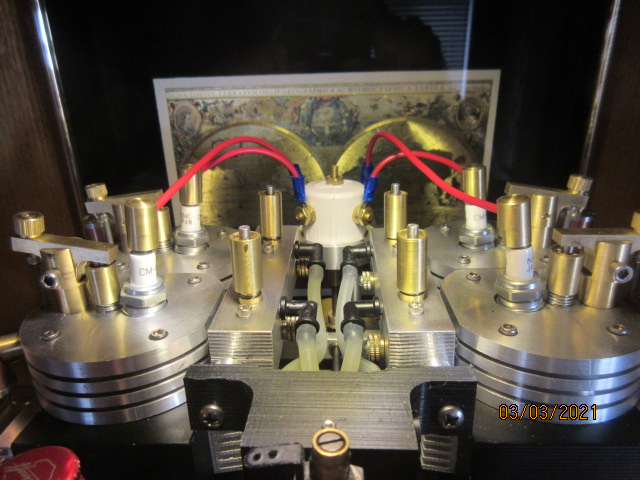 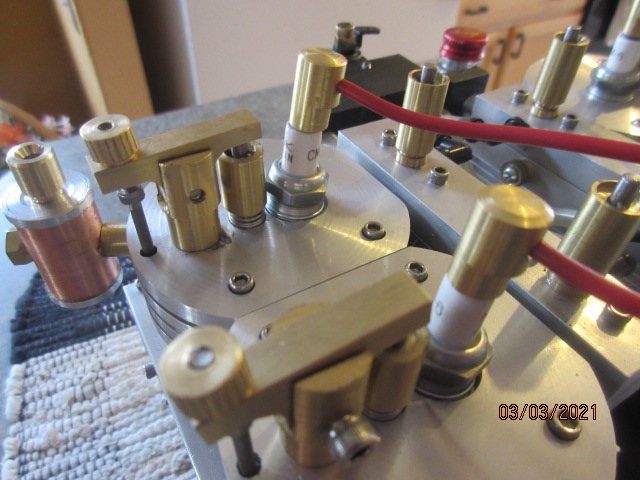 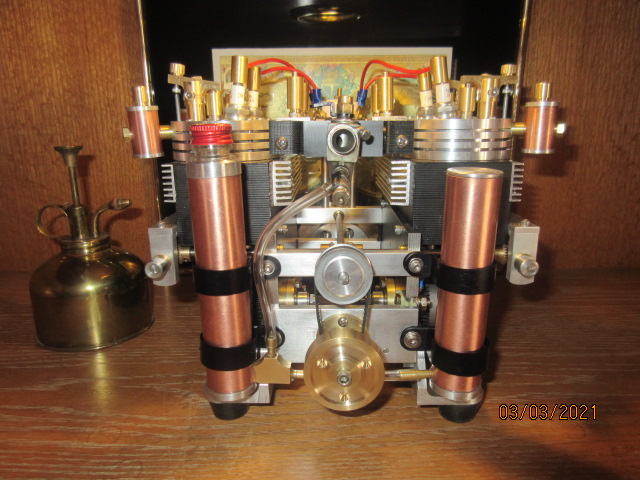 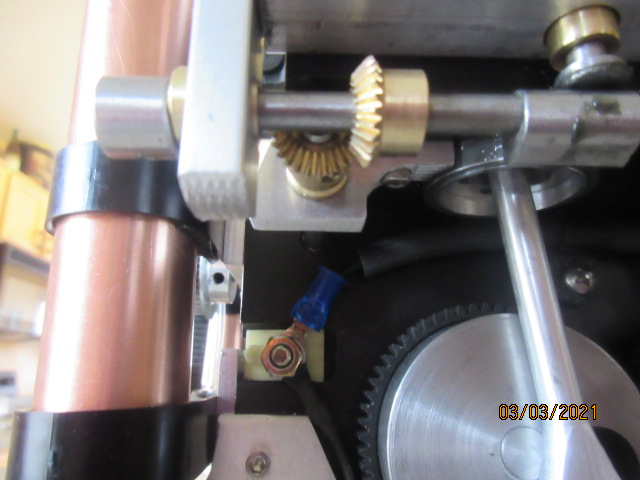 And geared crankshaft to central flywheel. 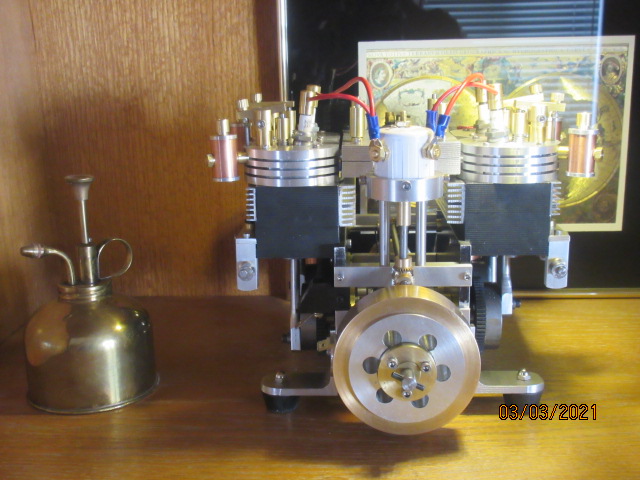