Hoping for some help despite old thread. Have completed most parts but being fairly new to machining I wondered -

How do you cut the slots etc in the connecting rods and get them parallel?

What work holding device do you use?

Hi Mike, first, using the pillar drill, after carefully setting the rod in the macine vice perpendicular to the drill axis, and then drilling a hole whose diameter is that of the width of the slot. I have simply used a hacksaw, from the end to the hole, holding the rod vertically in soft (fibre) jaws in the engineers vice. Then carefully open the slot and finish with very small thin files. (WARDING files). Yes, it is a test of your hand skills. Oft forgotten when many just try and use machines.
K2

When I made mine, I drilled the cross holes for the connecting pins and then without changing the setup used a fine slitting saw to make the slot. In the mating part I followed the same procedure using the slitting saw to cut away the top and bottom, leaving a tongue to fit smoothly into the mating slot. With no change of setup there is no risk of not being perfectly perpendicular and perhaps binding when assembled.

Mike, I agree with Almega above - do the drilling and milling in one set up to ensure perpendicularity.

I made my ends separately and soldered them on to tubes - I felt it was too long and spindly to machine from solid.

It's do-able but you would probably have to turn it around and loose your reference for both ends to be true to each other in any case- so I figured solder would work just as well and if you did make a pig's ear of the alignment it would be fixable. 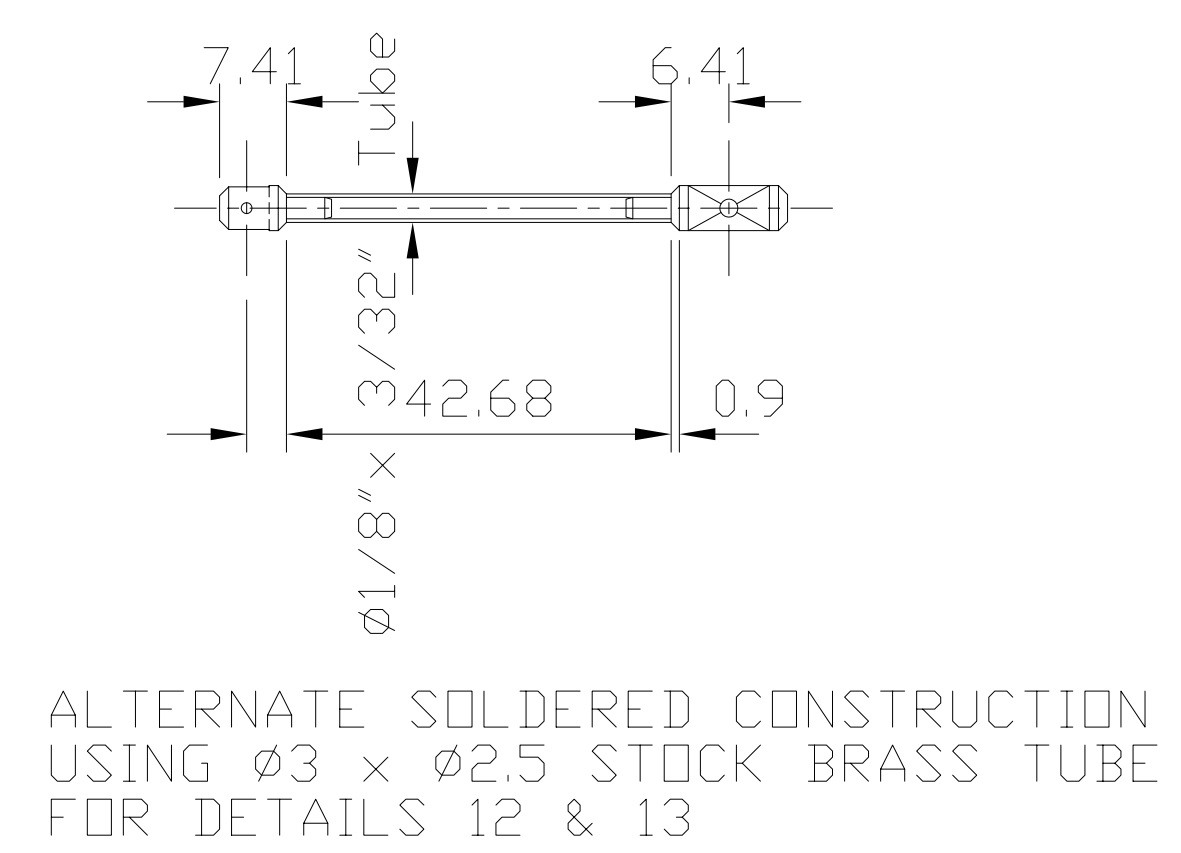 I soldered one end first - no need to reference yet.

Then I clamped the other end vertical in a vice using MDF either side to clamp against the milled flat thus aligning it to the vice.

Then I put a piece of solder in the tube (with the first end already soldered) and stood it upright on the other end in the vice - "eyeballed" it parallel with a ruler - heated it with a butane torch until the solder showed up at the tube end - et voila - worked fine.

Both ends being effectively soldered from the inside by the expedient of placing a piece of solder in the tube before assembly and heating.

A couple of good ideas here. I am not sure why the slots and blades have to be precise? I understand the holes for big end and gudgeon pin MUST be parallel, but as the bearings and pins should be the ONLY contact points then clearance, although small, on any alignment (well, say within a couple of degrees) is all that matters. My Hand-fettled parts - being clearance - are trouble free on all my engines. The only engine where there is axial motion along a big-end is on a fabricated crank, where 1 reamed hole was oversized, so a tiny clearance for the big-end cantilever pin to go off alignment... but this is now a fun talking point when I run the engine, as few understand why the rod moves on the pin! The engine is one I run on miniscule air, on just a few psi, at less than 100rpm. It is a table engine, and many like to watch it...
K2

I made mine from 12L14 rather than brass and I did make them of one piece which worked surprisingly well, with no bending although I did take very light cuts. For the drilling and slotting, each part was done with a single setup by holding in a small aluminum "jaw" tightened on the center part of the part, leaving the ends accessible to machine and then that fixture is clamped into the mill vise. 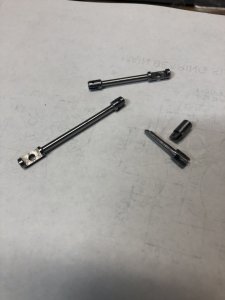 Wow thanks everyone for the ideas so quickly (you know how it is when you are getting to the end of a project and get stuck ).

I have, with a number of failures, machined the parts in one piece and the 3mm center section is not strong, hence the work holding question as I realised being able to access both ends on the mill would be the ticket.

If it fails I will try the tube and solder trick, I like that!

Really enjoying my retirement hobby and the help from this forum with replies from all over the world.

Warding files are small files for getting into small places, sometimes mis-labelled as jeweler's files. 12L14 is leaded, free machining steel that cuts like butter with sharp tooling and can polish up nicely. The nomenclature for 12L14 may be different in Tasmania than here (I am in the mid-western US), you will have to check with your supplier about that. Just a note, I chose to make my version of the Sterling 60 engine (still in process) of steel rather than brass because I intend to paint parts of the support structure, steel is actually less dense than brass and a lot stronger, I don't like the look of tarnished brass, I like the look of polished steel, and brass has become ridiculously expensive in my area. Good luck making your parts; just take your time and enjoy the process.

I finally made a Boo-Boo with this motor - so just a heads up.

I have run this motor many times and many hours at shows but recently after nearly two years of not using it I tried to start it in the clockwise direction – idiot.

Here’s the problem – I often use a butane flame to light the wick and to pre-heat the cylinder. By turning the motor in the wrong direction the thermal cycle is reversed and it drives up the displacer volume temperature.

Additionally I was applying way too much heat and of course it refused to start in that direction consequently the displacer bulb unsoldered itself.

Maybe add a direction indicating arrow to the flywheel.

Thanks for the tip Ken, I wonder if that is why my engine doesn't run?....
Must dig it out and try again...
K2

Although I got it running it was not as it should be - it turns out it had been dropped and was misaligned.

Anyway I resoldered the displacer but it did not run as it should and I ended up overheating it and suffering the same failure - so I added a couple of screws but this made things worse.

So I made a solid Aluminium displacer and it refused to run - I noticed a distinct "moaning" from the engine which appeared to be the displacer shaft running in its cast iron bush.

Ah-Ha - is doesn't like the mass cantilevered over the bearing - so I figured lets make a lighter piston that does not require soldering so I designed a lightweight crimped and spun closed displacer thus :- 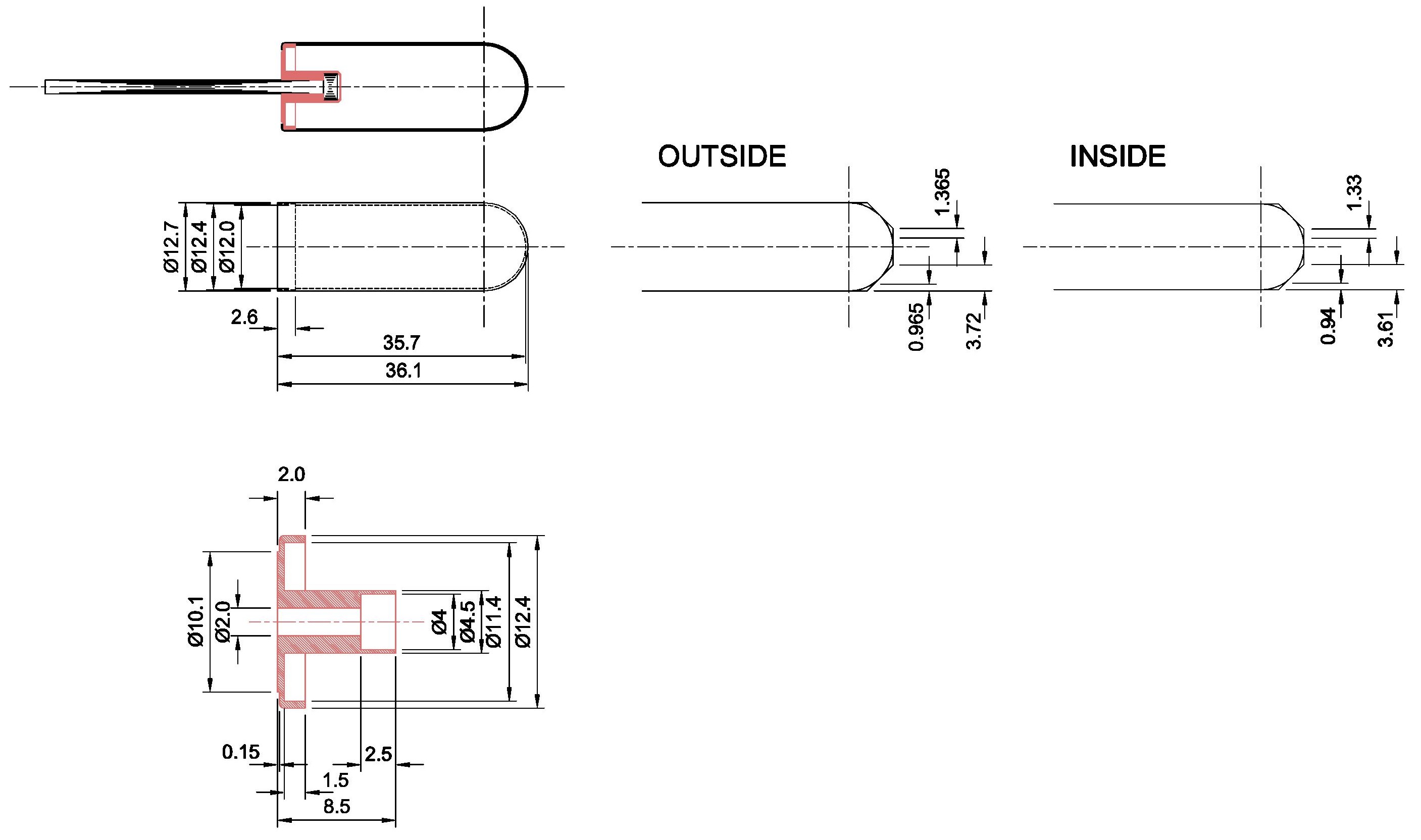 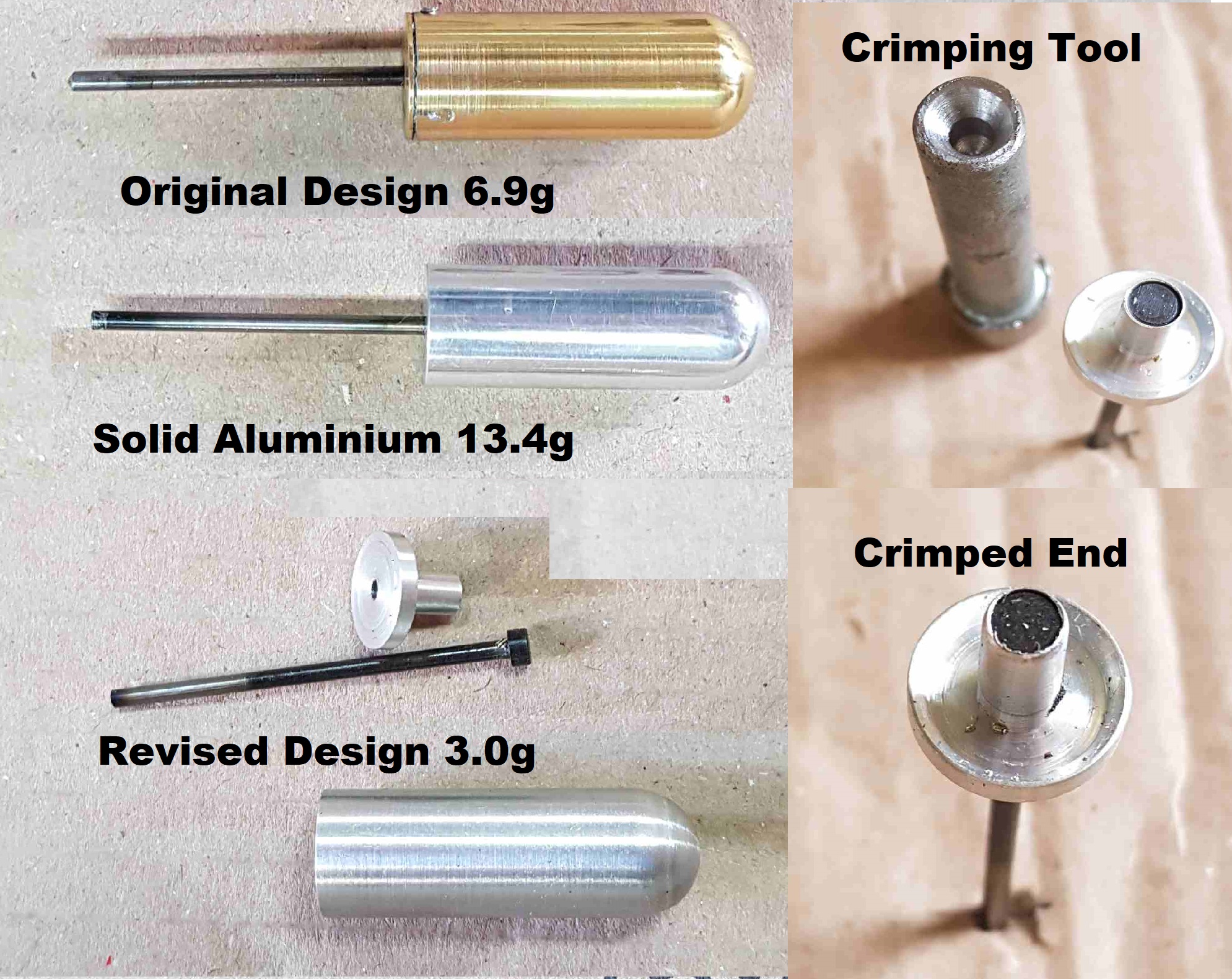 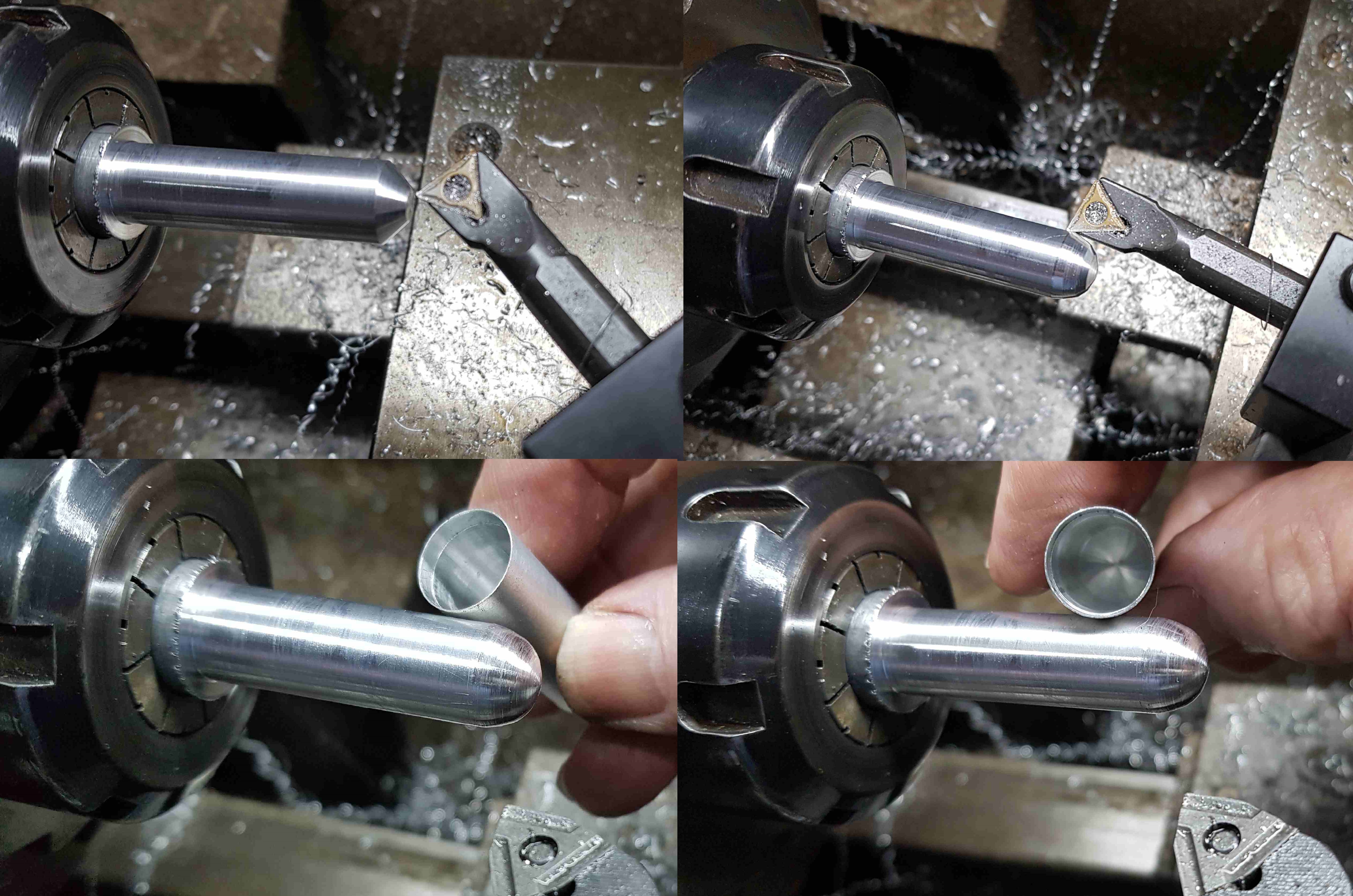 First turned the outer shell parted off square - then locktite to a mandrel to machine the radiused outer end.
I turned the radius as a series of flats at 22.5° increments and then finished by file and emery. Note: I am turning in reverse - its easier to get at all the angles that way.

After crimping the end to the shaft, I spun that into the end of the displacer shell :- 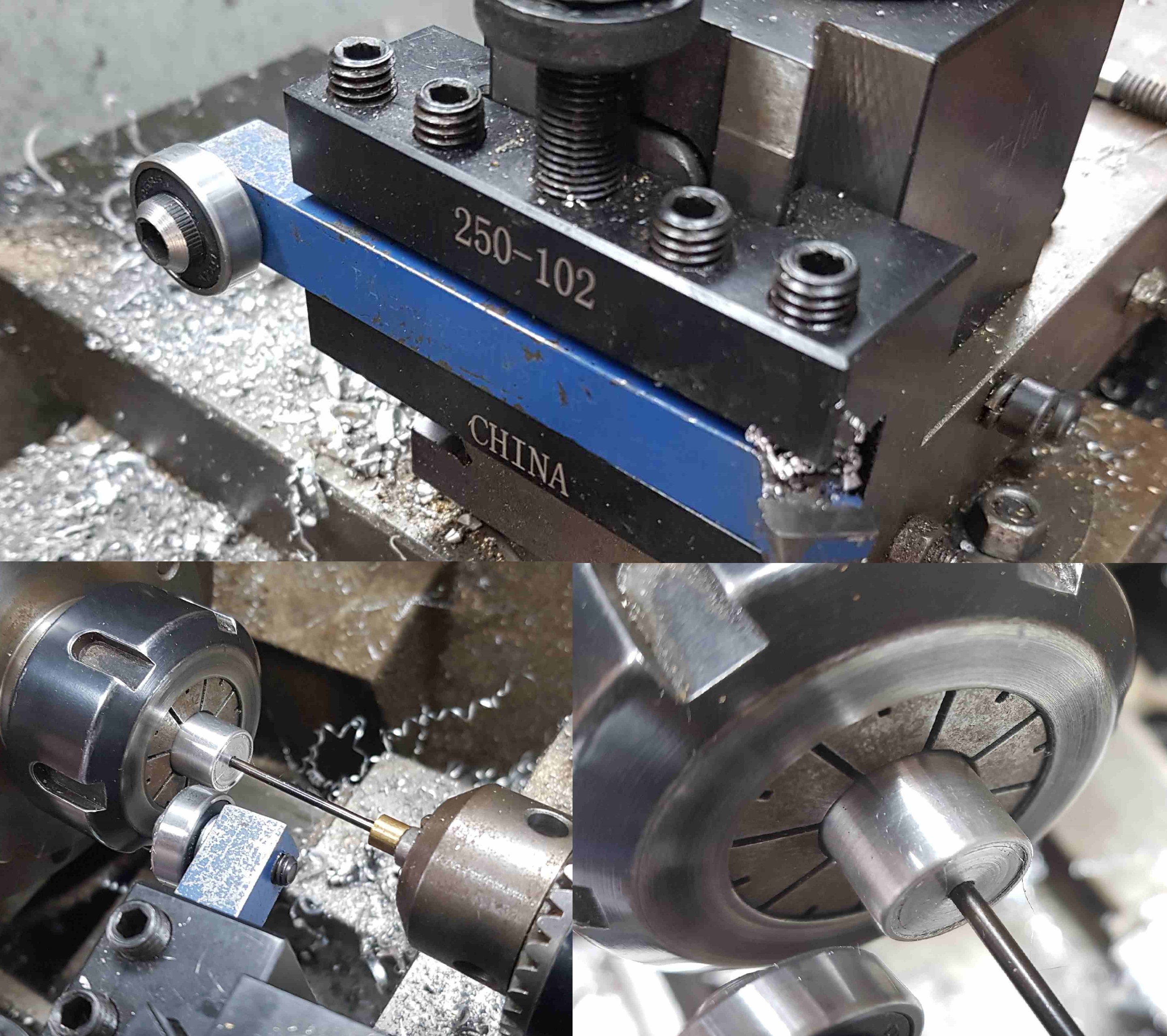 I ran the ball-bearing aginst a bar and polished up and improved the corner rad with a diamond file before spinning the 0.25mm thick wall. I used a tailstock bush to align and press the assembly together during spinning.

Put the motor back together and the damn thing still didn't run.

It was not a failure, the problem was misalignment all along (like I said I think it had been dropped) so once I got that sorted all was well.

It will now run super slowly on a low flame.

Here's what I think: The motor needs to be absolutely free running (nothing new there) however the bending moment on the displacer rod bush generates friction - my bush is 1mm longer than Jerome's original design and that alone will help. However the radically reduced displacer mass is an even greater improvement.

Jerome's design advocates using no oil and no seals or grease in the ball bearings - even the drag from lube can stall this millwatt power engine - however I have always run mine fully lubed including the grease and seals in the ball-bearings.

But I am impressed with now being able to run it so slowly - the video is not a slow-mo and was filmed in very subdued light so you can see the flame.

Hope you get something out of this.

Thanks Ken 1.
That is really helpful. And I am really impressed with the performance of your engine.
I was toying with the idea of making the displacer from a cigar tube (Aluminium pressing, very low mass!) and your idea of the spun end - correctly aligned - tells me all I need to know.
It was a Chinese kit, and they suggested a ball of wire wool for the displacer, but I could not see how that would act as a displacer with it being a thermal mass, porose to the air in the hot and cold end. But maybe it should work and it is my assembly that is useless?
Anyhow, I'll make the aluminium displacer like yours and re-set alignments, lose the oil drag and try again.
THANKS
K2
You must log in or register to reply here.