I hope your health improves windy, as I'd very much like to see more of this

At one time you were looking for an alternative cylinder lubricant. I found information about this Teflon coating in another steam forum.

"I picked up this great Teflon coating spray from Grainger that works really well. These sprays were originally marketed for non-stick cookware resurfacing...but due to the toxicity of Teflon fumes when overheated, they now call it simply &#8220;dry lubricant&#8221; for liability reasons. It actually bonds to metal surprisingly well...but takes several days to coat and re-coat it sufficiently. I plan on coating both the cam and lifter contact surfaces with it to keep the friction down...I did this to hydraulic gear pump components with good results, using it as a high pressure water pump"
Last edited by a moderator: Oct 23, 2018

lohring said:
At one time you were looking for an alternative cylinder lubricant. I found information about this Teflon coating in another steam forum.

Back at the beginning of this thread, there is a discussion about a "piscesII" engine, and "George" KBC posted some pics of a very interesting looking engine in for a flash steam boat. Can anyone tell me more about this engine ? I assume its a single cylinder poppet valve uniflow, and assume the great driven apparatus on the side is a feed water pump?
thx!
F

You can contact George aka Ooya on MEM or Model Boat Mayhem.He did a thread about flash steam and that engine on the RC groups site
He no longer posts on this site I believe
The pumps are for water and fuel
The engine is based on Mr Kirtleys design Piscese as for the rest George will know
D

E-mailed "My Hobby Shop" about them sending me incomplete plans. They promptly replied with apologies, and an offer for a full refund of my money. They said they'd make arrangements and get back to me. That was almost one month ago, and I have heard nothing from them.

Now, I have to try to stop payments on my credit card. Too much work for some drawings!


EDIT:
Attempted to contact my credit card Customer Service Dept. What a joke! 20 minutes pressing this, and, pressing that, listening to menus etc. and, I still couldn't connect to any human being to help me stop a payment! Just computer-generated, robotic-voice, crap!! Blood pressure at stroke levels.

Here's the kick in the butt... just opened my credit statement, and read that "My Hobby Shop" gave me credit for the drawings. God forbid they would have notified me with an e-mail to tell me, and let me know that a refund was applied to my account.

I'm sorry I ever sent for the drawings.
Click to expand...

An old thread, but I have been enjoying reading through as I contemplate a venture into flash steam Hydroplanes.
Thank you for posting and inspiring..

ericohara said:
An old thread, but I have been enjoying reading through as I contemplate a venture into flash steam Hydroplanes.
Thank you for posting and inspiring..
Click to expand...

Depending what you want to use a flash steam power plant for if model hydroplanes have a look at On the Wire website.
At moment have made a full size version of my model flash steam engine to put in a two or 3 wheel hopeful record attempt vehicle.
If serious about building flash steam hydro I have still a lot of advice on record.
Use high tensile steels for cranks etc. don't over complicate that simple Westbury engine updated is a good start the generator and pumps are the key to high power.
Have you seen an earlier video of my big boy test
Last edited: Mar 28, 2021

"Windy", I have been watching / stalking you for a little while. You have been great inspiration, I am glad you answered.
I am slowly gathering toward making a reverse engineered 20s hydro to gain a little experience whilst hopefully capturing something historical in spirit. On the Wire has been my main inspiration.
As for the record vehicle... again I suspected as much! I do look forward to developments... you are an inspiration. Thank you.

I was at my spiritual home today to observe various speed addicts.
Was fortunate to be shown a photo taken in 1973 of my scrapyard special at a 1/4 mile sprint at Topcliffe.
9.593 seconds with terminal speed of 153.8 mph and is a course record.
No doubt smoking is addictive did eventually give it up when doing flying attempts.

Spectacular! That is very impressive performance, thank you for sharing.

When you decide to build a flash steamer here are a few pictures of what could happen.
This happened Hull 25 June 2006 and did a rebuild for the next meeting at Kingsbury 30 July 2006.
Last picture is the new boat it had many aviation problems then my last hull in 2013 was good up to about 135mph then take off after that.
Had made it very strong and survived many high speed crashes with it with superficial damage.
Maximum weight dry has not to be more than 16lbs.

This is the autopsy notes on the disaster.
New piston ring. New gudgeoned pin. New valve spring(music wire, same size as SS higher rate) 1st run 105.87 mph 2nd run 89 mph 3rd run going very fast when prop broke and boat totally disintegrates. I had fitted the 16Pitch prop by mistake, thinking it was the 14Pitch. With the 16p and 9+mm stroke it may be ideal. 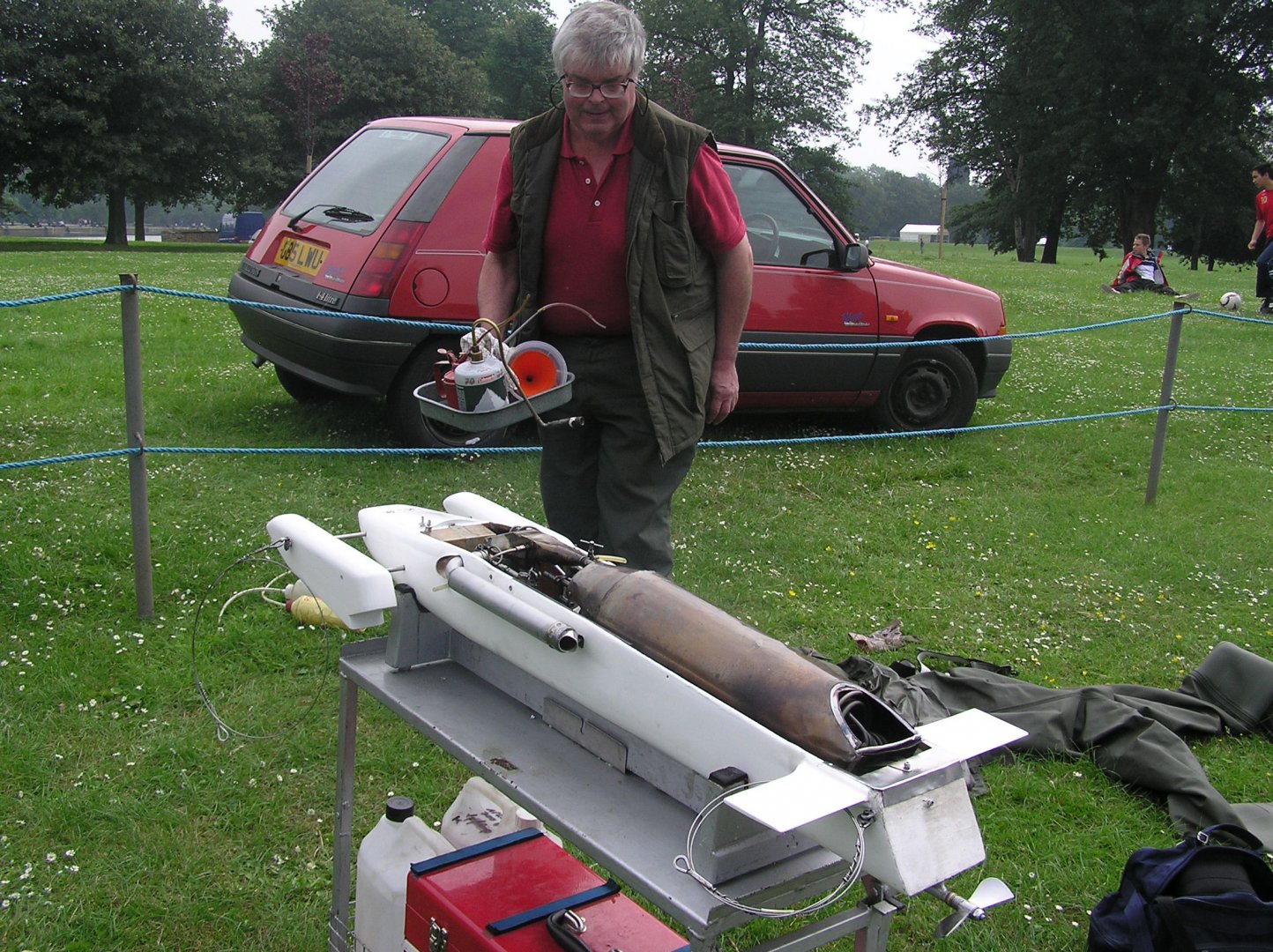 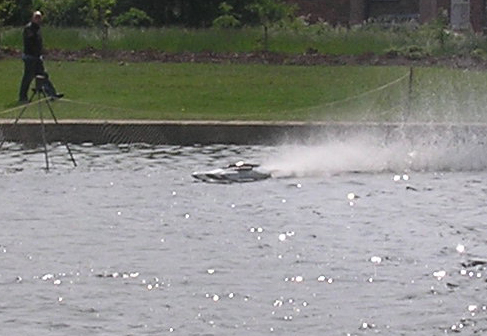 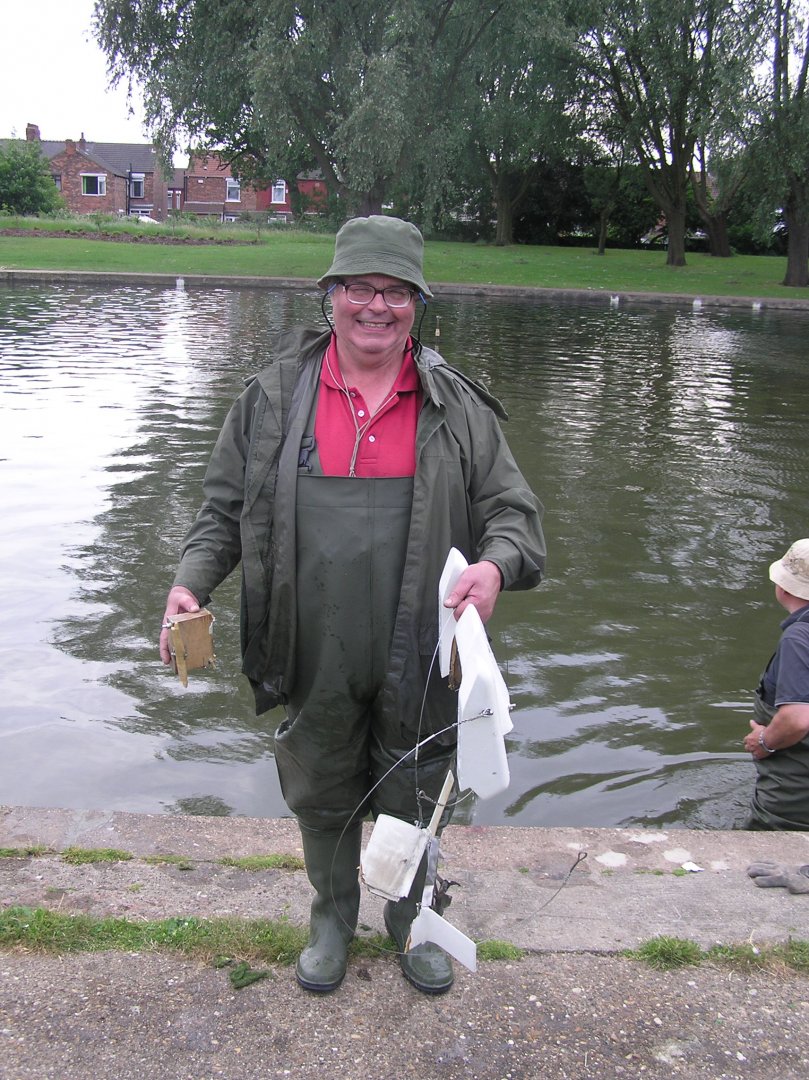 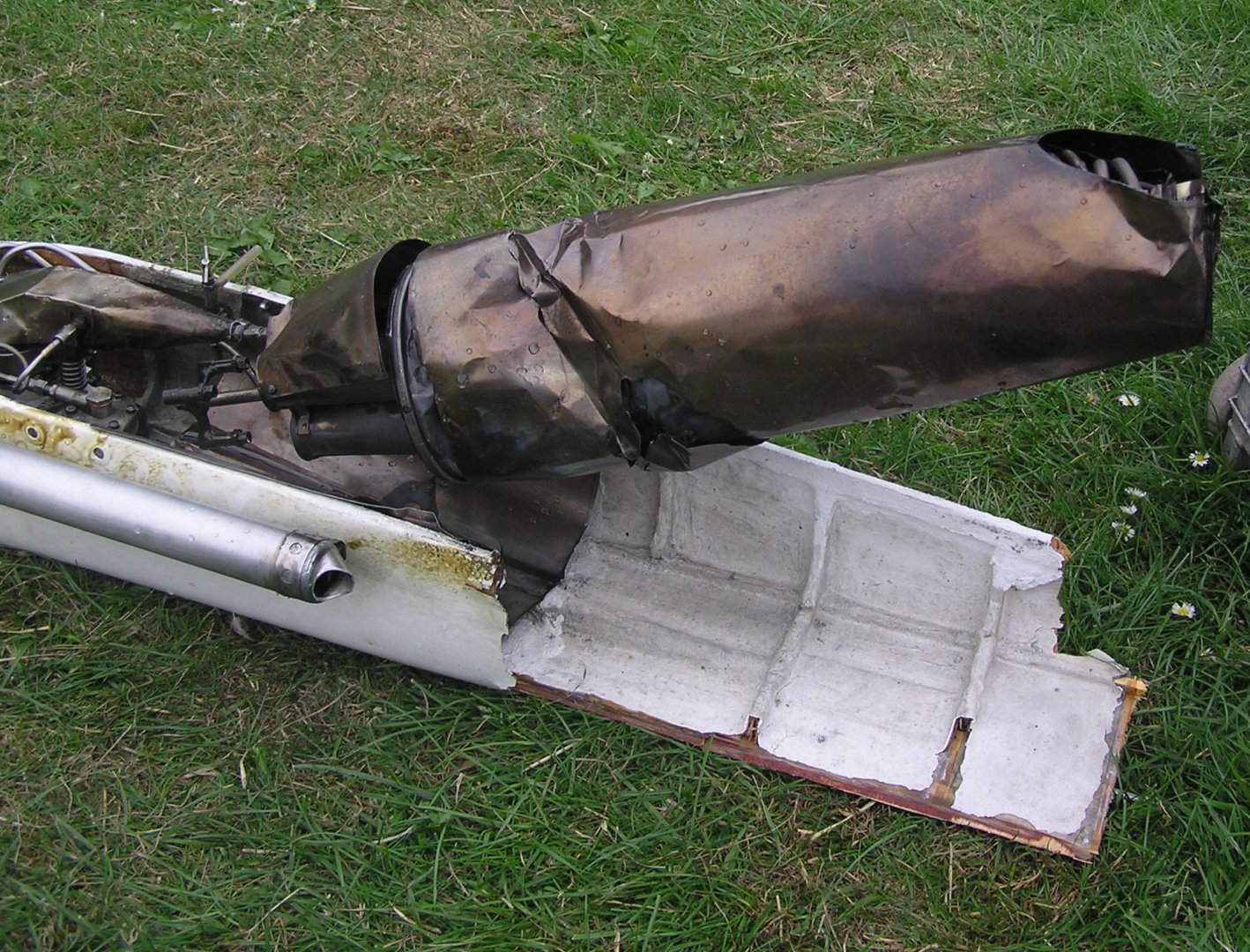 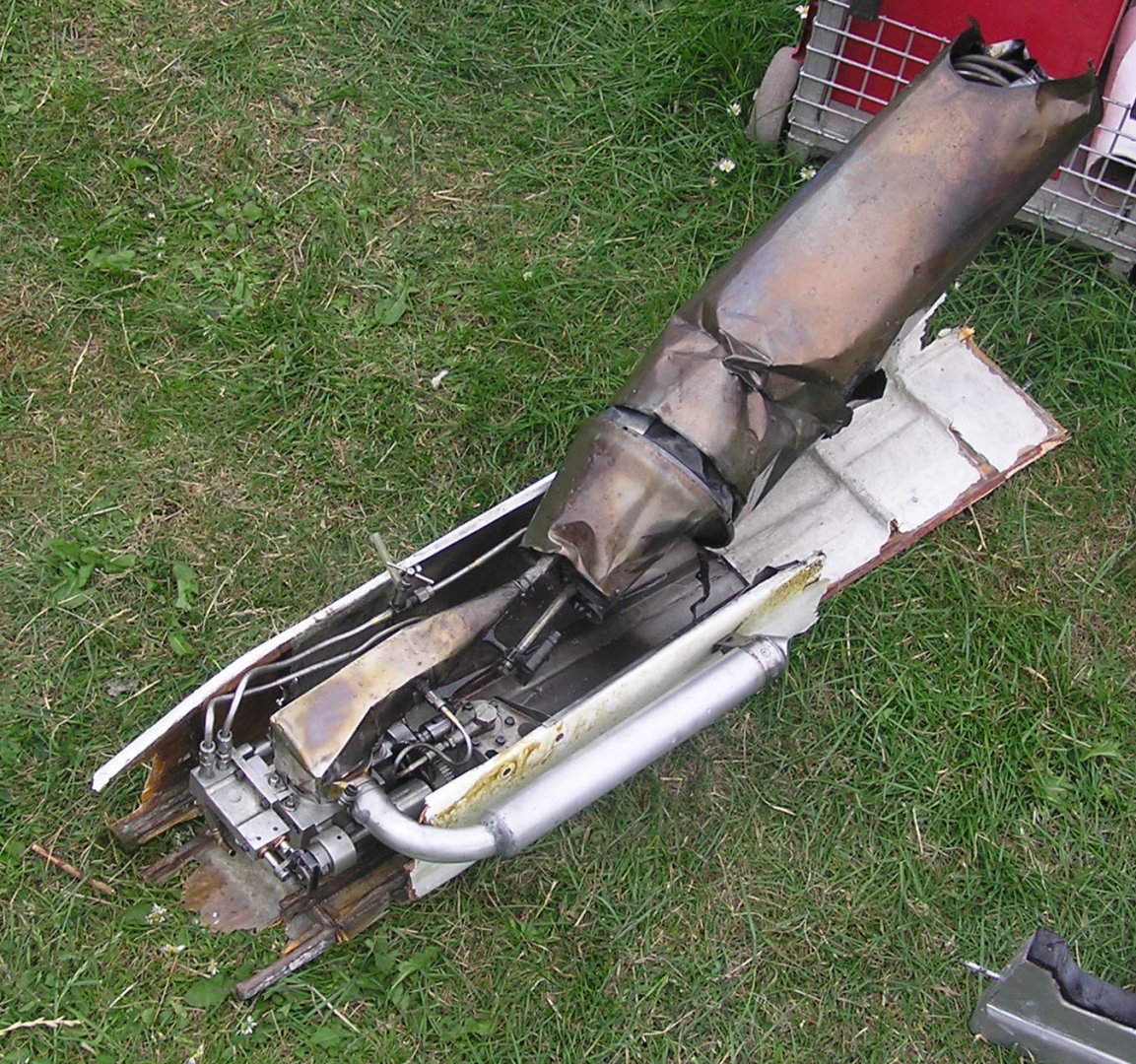 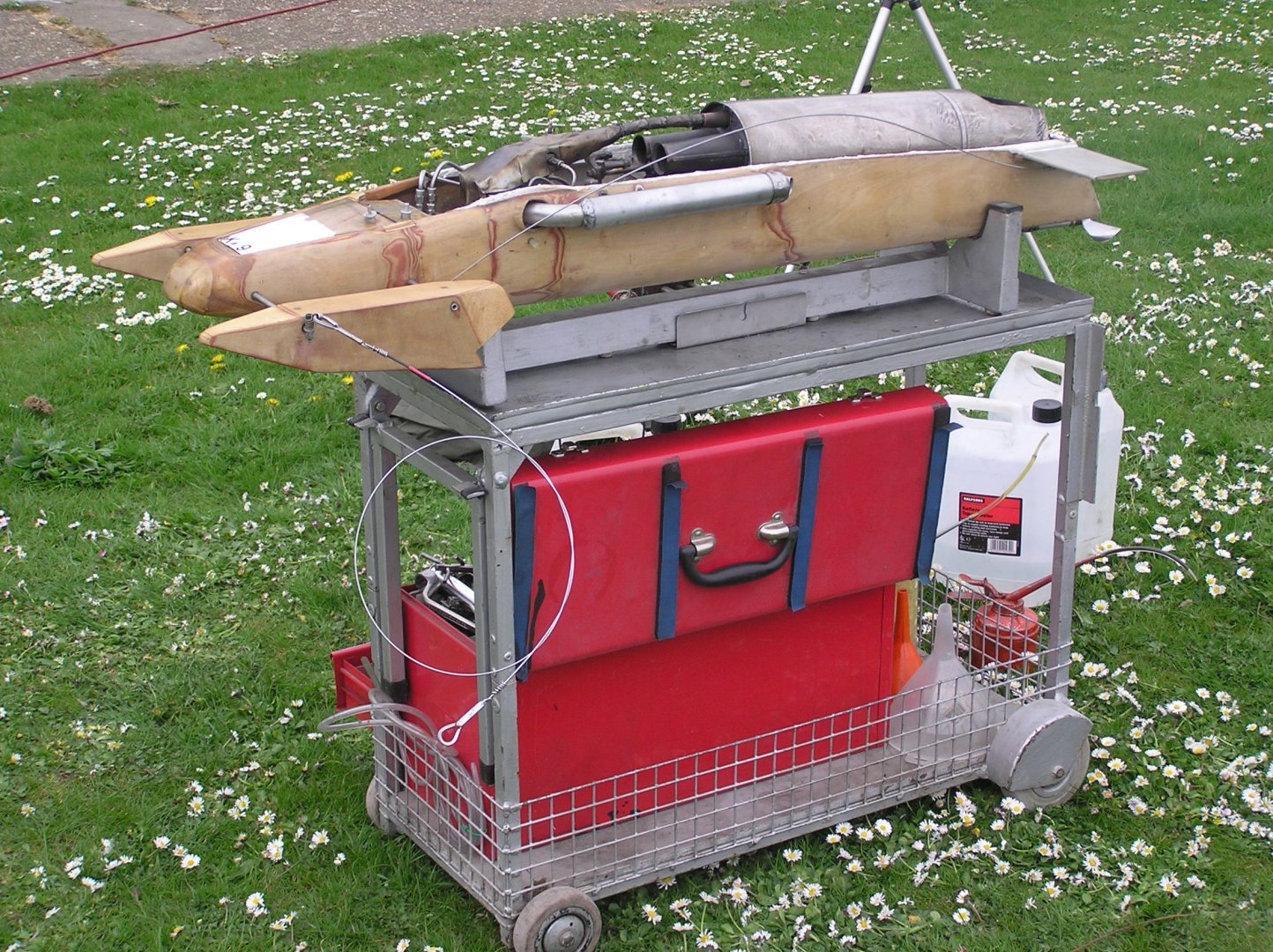 I know this is a model engine Forum and hope am not offending anyone by posting my full size interests.
Before being involved with motorcycle speed attempts I was model engineering and made a Westbury horizontal mill engine at school.
Then played about making a gauge 1 steam engine that never was finished.
Motorcycles interests then took hold and was interested in resurrecting a Rudge basket case for vintage sprinting but frame was rotten and beyond my limited knowledge to repair.
The blown Triumphs for sprinting eventually were built and made my own frames that had to be bronze welded outside as had no workshop apart from a few square feet of shed space.
Workshop got updated and was a 6ft x 8ft still frame making outside.
When I called it a day with full size speed attempts started model engineering again.
Started on a traction engine but speed was my first love and seeing Bobs article on his 100 mph flash steam hydro that had me hooked.
Am a fisherman so I swallowed the bait after many enjoyable years developing my now record breaker had to retire.
It's now in the good hands of a past steam record breaker just hope he can go faster than me as engine has the power to do that.

Back to that earlier post of mine in 1973 here is a report on it.
You don't always need a state of the art workshop and a mountain of money in those days to do well. 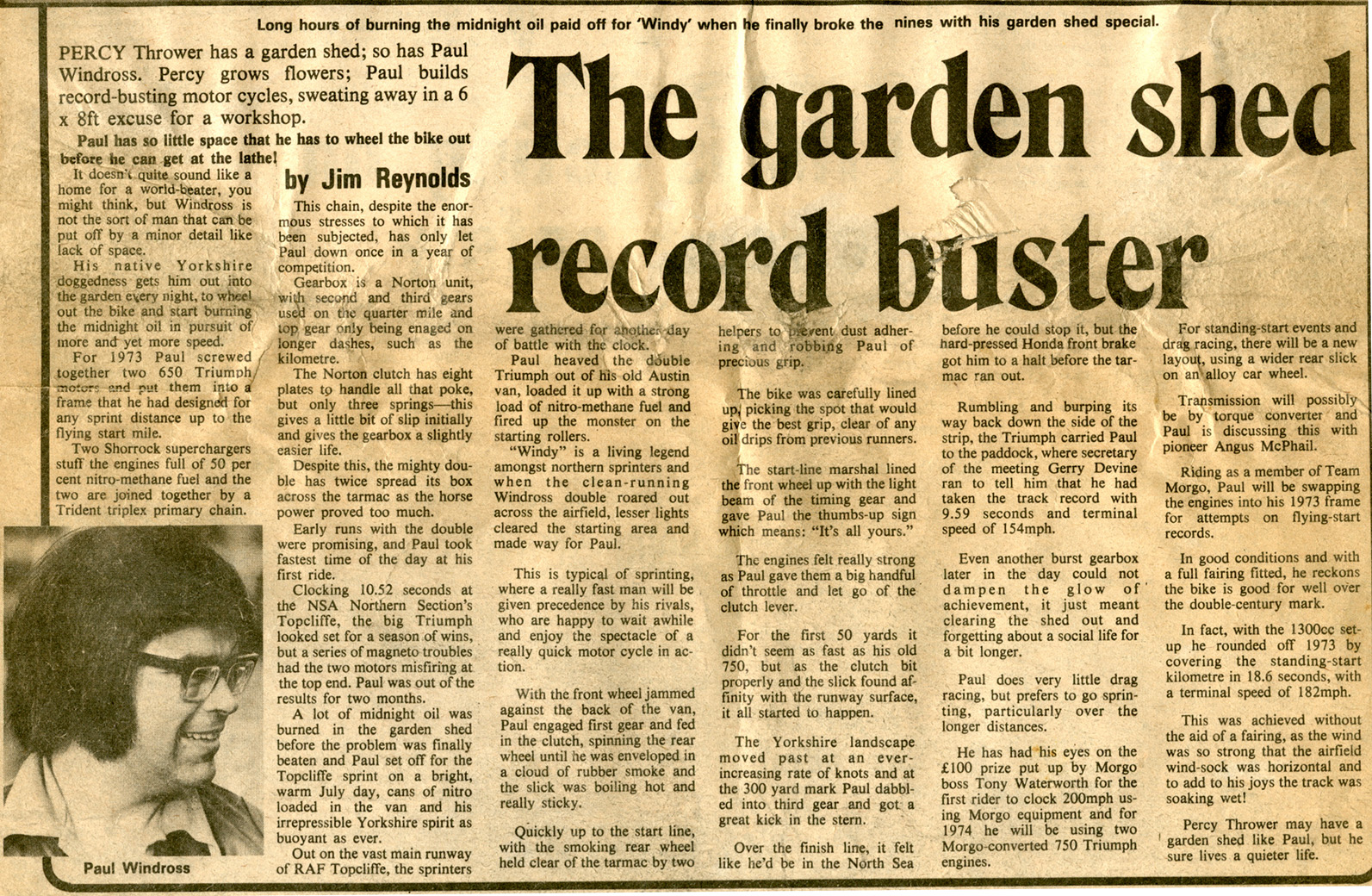 Thanks Windy, I enjoyed that! Keep posting stuff, as I reckon others will enjoy as well.
K2
S

lohring said:
At one time you were looking for an alternative cylinder lubricant. I found information about this Teflon coating in another steam forum.

"I picked up this great Teflon coating spray from Grainger that works really well. These sprays were originally marketed for non-stick cookware resurfacing...but due to the toxicity of Teflon fumes when overheated, they now call it simply &#8220;dry lubricant&#8221; for liability reasons. It actually bonds to metal surprisingly well...but takes several days to coat and re-coat it sufficiently. I plan on coating both the cam and lifter contact surfaces with it to keep the friction down...I did this to hydraulic gear pump components with good results, using it as a high pressure water pump"
Click to expand...

Interesting! Did you know modern diesel engines can have molybdenum coated skirts on their pistons for scuffing resistance and low friction = more power at the crank? ( My wife told me " every girl needs a little black skirt!").
On that thought....
K2

Steam record dreams.
Think the following was to be in 1988 at Elvington something put an end to its attempt.
Does anyone know what happened to the car?

Windy, thank you for the close up pictures of your boiler and engine although it is a shame to have such a good "internal" view after the accident!
I would like to introduce myself to flash steam hydros by reverse engineering something like the "Evil Spirit" very early hydroplane. My reasons are also to give me an historic piece to enjoy. I have never made an engine before and so reverse engineering in the spirit of those early craft would be a good starting point and with the help of people like you and this forum, not too complex. Do yo have any thoughts on a "old style" single cylinder set up please?
By the way, your article on the sprint bike and in a shed is brilliant, thank you
S

An excellent engine is this one from Brian Rupnow: He sells his plans
1" Bore x 1" Stroke Vertical i.c. Engine
K2

Steamchick said:
An excellent engine is this one from Brian Rupnow: He sells his plans
1" Bore x 1" Stroke Vertical i.c. Engine
K2
Click to expand...

Steamchick, thank you for your reply, this looks like a really nice engine, I will study more..
I am sorry, I should have made it clear in my post, I meant a little single cylinder steam engine in the spirit of the early 1900s flashsteam hydroplane period.
Thank you for your help though.
You must log in or register to reply here.
Share:
Facebook Twitter Reddit Pinterest Tumblr WhatsApp Email Link