Back in February after reading Chuck Fellows Dividing head thread I thought this would be a perfect tool for my buddy Brett. Brett makes a lot of my products, one of which is a 12 sided fixture used in the gunsmithing trade. Brett&#8217;s CNC machine is an 80&#8217;s vintage VMC and has no support for a 4th axis. After discussing it with him he also thought it would be worth looking into provided we could get the machine to do the indexing ( run unattended ). So the story begins&#8230;.About this time Member Rodw started working on another version of code that was a bit more precise on the math. With a lot of help from Rod, I finally got an external proximity switch to trigger the index , so now everything works on the bench. Time to start making a &#8220;Proper&#8221; package.
Brett wanted to use a huge Cincinnati dividing head he had acquired, this is definitely industrial grade ! It has a 1 ½&#8221; through hole and is sporting an 8&#8221; 3 jaw chuck. We used a NEMA 34 motor with 640 oz in of torque to drive it. Brett made the stepper adapter and made a few minor modifications to the dividing head to get it all mounted.
To drive the stepper I ordered a Meanwell 48 volt 10 amp powersupply and used an old microstepping driver I had on hand from when I upgraded the motors and drivers on my Tormach 1100 mill. I also used a buck stepdown converter to get low voltage to drive the Arduino and prox switch. The drive electronics fit nicely into a project box. The Arduino will need to be by the machine control so it was put into its own box and connected to the main box with a Cat 5 cable. I milled a cover for the LCD button shield from a piece of 5/8&#8221; acrylic , mostly just to test my code for the complex pocketing, I was planning on re-doing it in aluminum , but it looked so cool I thought we should give it a try. The acrylic cuts really well if you use coolant and really sharp tools. It leaves a very &#8220;clear&#8221; finish. I did do a bit of polishing with some Novus plastic polish on the areas that the bottom of the endmill cut, the sides hardly needed any polishing at all. I made the button extensions from brass, these fit into counterbores in the cover. The prox switch is also connected to the main box with an RJ11 connector. I used an Amphenol connector for the stepper motor. This is the same connector that my Tormach uses for the 4th axis. I thought it might be nice to be able to swap indexers between our 2 machines. This really turned out nice and cut cycle time considerably as well as several setups from how they were previously made. So, many thanks to Chuck Fellows for starting me down this road and many thanks to Rodw for all his help !!
I will attach a bunch of pictures to this post and start editing some video for another post.
Scott 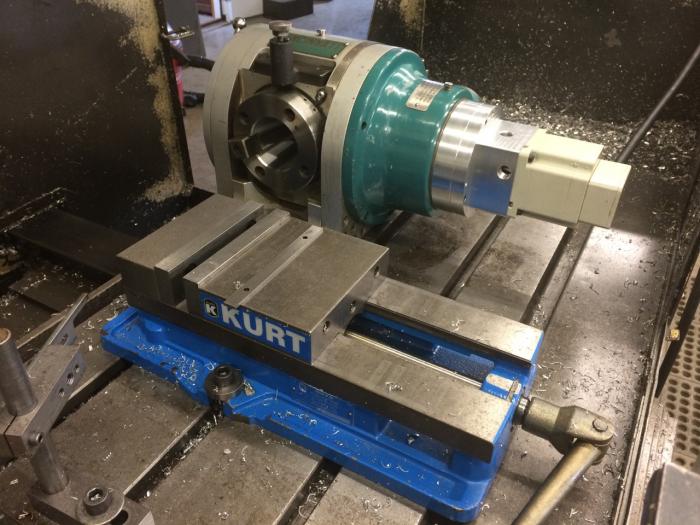 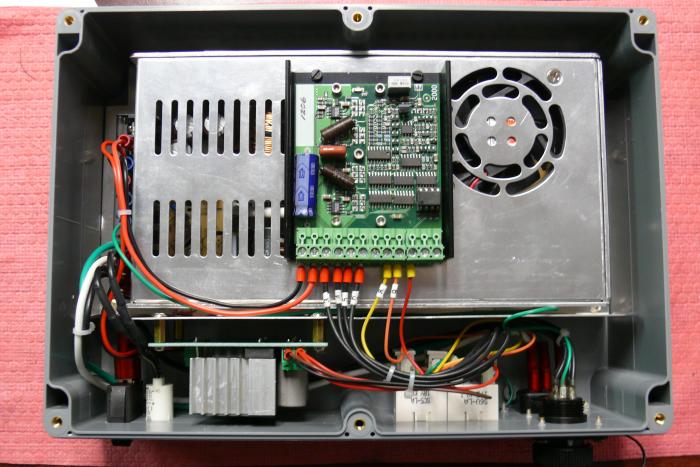 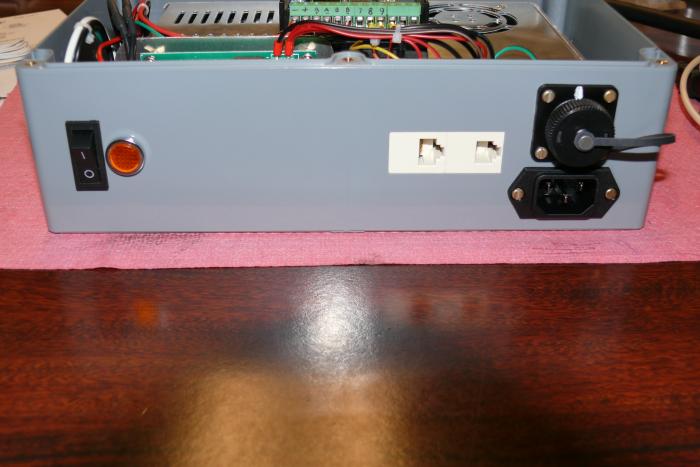 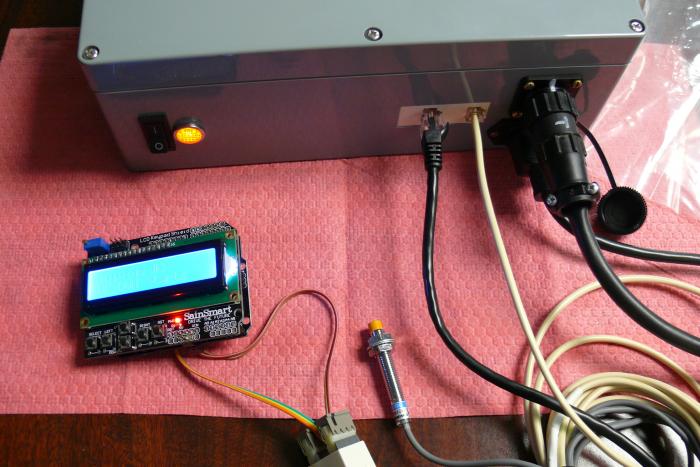 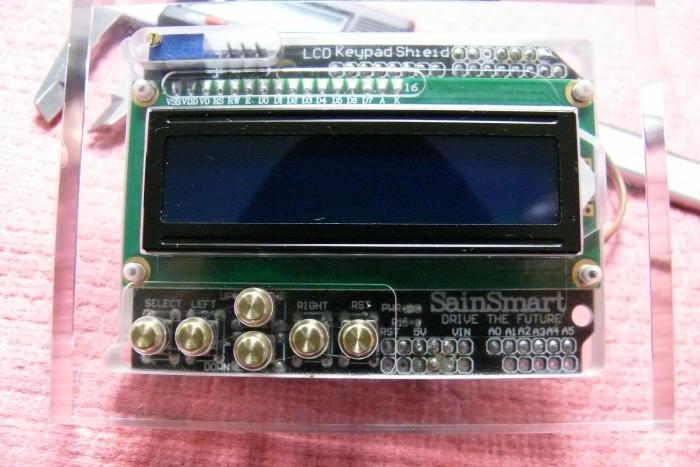 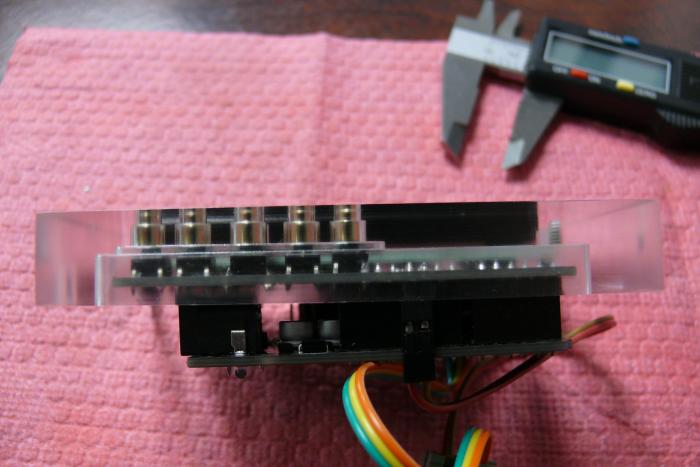 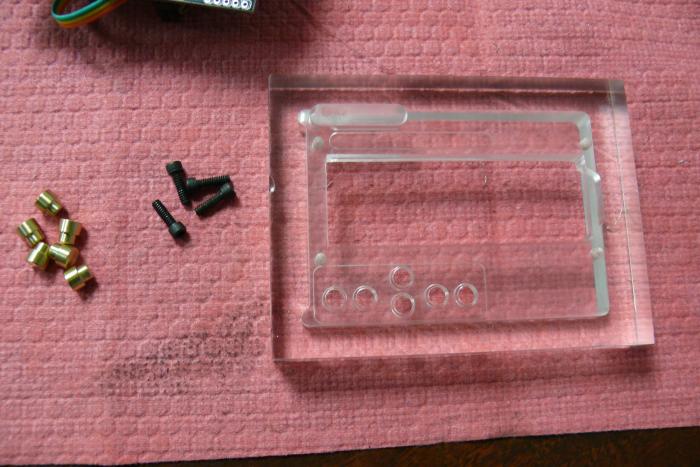 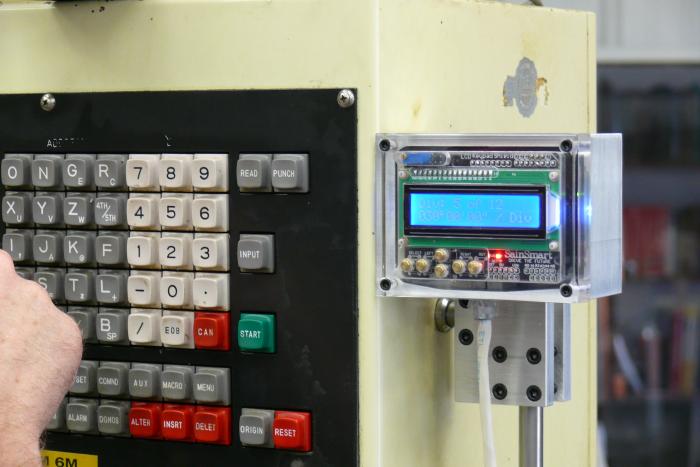 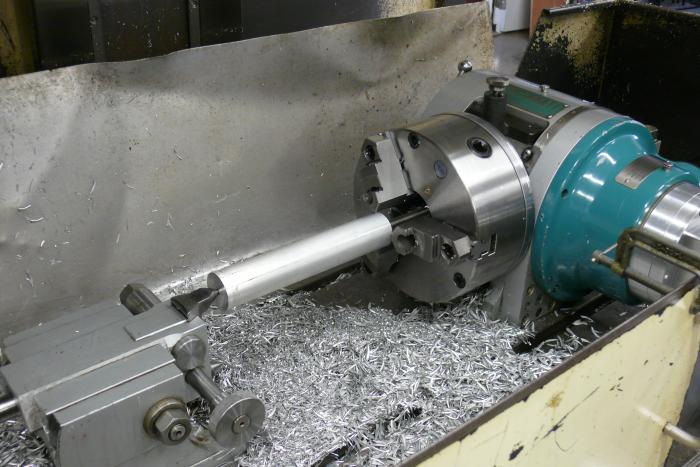 I just uploaded video to YouTube it should be below. This is the full 8 minute run of the part. The "indexing" starts about 4.30 in. But I know a lot of you guys like watching CNC machines run so I posted it all.
For reference the stock being cut is 6061 aluminum 1.5" dia. about 8.25" long. Those first roughing cuts are done with a 1/2" endmill at 2000 rpm and 30 inches a minute. Step over is about .4" and depth is .75", a nice healthy cut ! You can hear us laughing when a stream of chips go right past the camera. ( and my face )
The Proximity switch is mounted to an arm on the right side of the table and passes a "Target" being held by the magnetic base.

Awesome work Scott. I never imagined my Arduino project would ever drive such a monster! Very cool indeed. Also great to see how it can be used to supplement a CNC machine and great to see it is in commercial use! It seems like the base code should be modified to use a digital port to press the left and right buttons for external control applications like this.

Hey Rod
Thanks for the kind words ! I could not have done it without you. Your help was truly appreciated !


rodw said:
It seems like the base code should be modified to use a digital port to press the left and right buttons for external control applications like this.
Click to expand...

And some finished parts 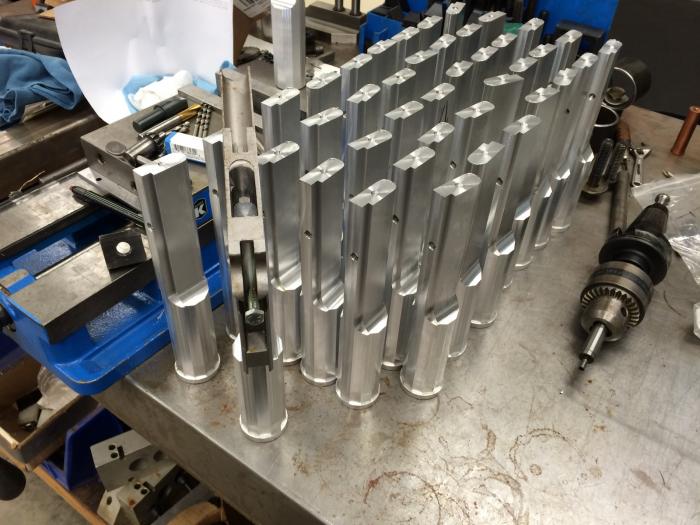 Thought I'd add a link to the original thread that has the downloads for anyone silly enough to want to try something similar.
http://www.homemodelenginemachinist.com/showthread.php?t=24118

That clear case is really cool! Why hide it all away when you can display the various bits that make it work? I may have to use that concept at some point.

Carbuilder said:
I may have to use that concept at some point.

If this gives you the inspiration to do so, I would be flattered ! And thank you for the kind words.

Could you please advise code changes required in the sketch to operate the device from a proximity detector or just plain limit switch, my project is milling out between webs to journal depth on a model V8 crank, lots of small cuts back and forth.

Hi Emgee
Give me a bit to gather that info. I will post the entire sketch, I had to change several things. I used a different LCD Keypad. I will detail the changes when I get a minute.
The weather is so unseasonably warm I have been outside working, supposed to be as nice tomorrow. I cut the grass today ? northern Ohio mid December....crazy.

Hi Emgee
I have attached the sketch. Please turn on line numbers in the IDE under file/preferences.
In lines 153 through 157 the prox switch is defined. Debounce time is set here. Currently 100ms
In lines 270 through line 305 is the debounce code for the prox switch. Very important !!
And the actual switch code starts on line 375-378 in the GoDivide section
And again in line 480-483 ( I don&#8217;t remember why I put here as well ?? )
Now keep in mind this is on the older code. I have noticed some issues with this code, it seems there may be a rounding error somewhere. After several times around it is off a little bit. It is not losing steps because it will return to &#8220;Home&#8221; correctly.
Let me know if you have any questions , I hope I can answer them. It has been a while since I messed with this.

Thanks Scott, I will save and see if I can get all to work.

Hi Scott,
I have been contemplating doing the same thing with a Brown and Sharpe dividing head that I acquired when I bought a couple of machine tools. I was excited to see that someone had already had great luck with doing this. I was wondering if you had documented or took any pictures of the work that was done to the Cincinnati dividing head in preparation for the stepper motor. I also have got a couple questions about your setup and what you would have done differently on the project if you did it again.

The dividing head I have has got a little backlash in it and I was not sure if it could be taken up by the concentric worm gear engagement or not. Did you run into any problems with this or not?

Also I know a little about stepper motors but need to learn a lot more. I was thinking of using a Gecko drive only because I have heard a lot about them. Also is there a good supplier of motors that will hold up to the elements (coolant and what not)? Has anyone had any luck with Chinese power supplies drives and motors?

Originally I had envisioned activating the spindle indexing with an M code from the CNC, but I am not quite sure if this is possible or not. It may require some ladder work on the machine side of things and that may not be feasible. If anyone has any knowledge about his it would be helpful.

I am headed to the shop this morning to tear into my dividing head and get started on this project. I appreciate any input anyone has on this subject an am really excited that someone has already accomplished what I want to do.
Thanks
Scott S.

Hi Scott
There is no further documentation /pictures of the project.
The thing that is most important is that the shaft of both the stepper and the head are axially aligned. The mounting surface we used on the head was not perpendicular to its shaft. If you look in the first picture you can see that the stepper mount is 2 pieces. There is a ring attached to the head and the mount is bolted to that. After the ring was bolted to the head the stepper mounting surface was machined perpendicular to the shaft. We also used a mis-alignment coupler just in case.
We were unsure if all this would work so we did not want to chop up the dividing head and made all the mods to our parts.
This head was really old but like new, no backlash. If your backlash is the same all the way around , it can be adjusted out. But on a lot of older equipment you may find it has "bad spots " from being used in production going over the same place over and over. This is much harder to deal with.

Backlash may be an issue, if you can't get it out ,it may mean having to lock the head between indexes which would really slow things down.

Scott_M said:
Back in February after reading Chuck Fellows Dividing head thread I thought this would be a perfect ]
Click to expand...

Hi Scott
I did download Rod's program but can't get my stepper to work.
I notice you have the same "sainsmart" board that I have. Are you using Rod's program or your's. any wiring diagram would help me.

this is what I'm using for driver

Hi Luc
There was a conflict between the 2 LCD displays, I cannot remember what it was. It was in the LCD.h library. I edited the library and used Rods sketch as is.
It would take awhile to figure it out again, that was a year ago. I can't remember what I had for lunch an hour ago

If I get some time later I will look at it.

Find where you keep your libraries and open the LCD folder, in it open the file LCD.cpp in notepad. Change the backlight pin from 3 to 10, save and close. That should be all you need to get the Sainsmart working with the Freetronics library.
See photo 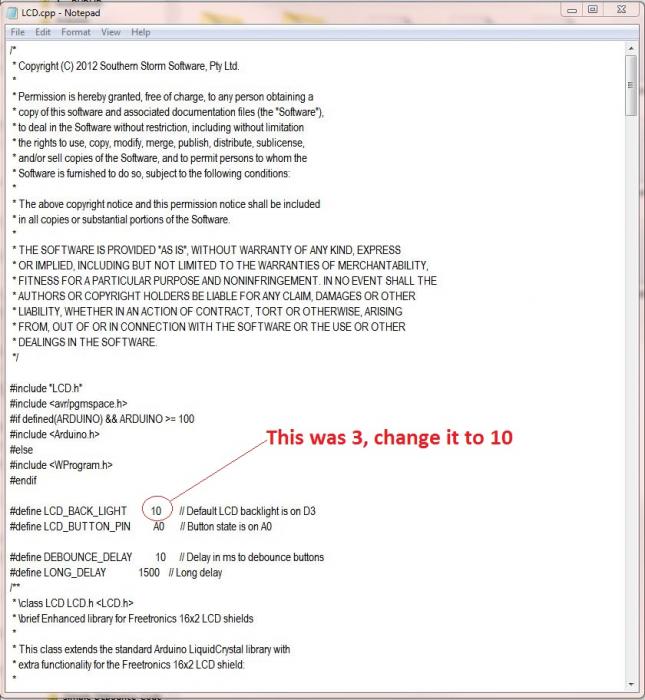 Could you please give us .ino file and wiring diagram.