Thanks GreenTwin, very interesting comment on the CO2 exposure time. I started out worrying that the gas wouldn’t get into the cores enough and left them in the bag for hours. Then wondered why they fell apart under their own weight. Since then I’ve generally not been as concerned about the exposure time but was definitely using a wetter mix, so I‘ll scale the mixture back on the next batch and see how it goes with just a whiff of gas.


Anyway, thanks again, when I get the larger crucible I’ll put together a furnace as you suggest.
R

So just by way of an update to the Gypsy casting saga.
I have increased the amount of aluminum I can melt to about 6lbs which is more than enough for this casting.
At this point I‘ve had four goes at it.
In the first one, shown below, there were some areas the metal did not completely flow. The mold was pretty thin in those areas and possibly that plus moisture/ steam out of the cores stopped it flowing. I post it as the failures can be enlightening or entertaining at the very least. 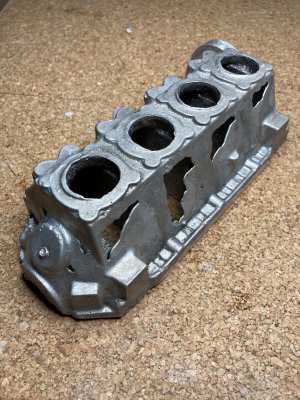 This first one was cast in petrobond but the later attempts were done in homebrew green sand ( play sand sieved to through #50 mesh with about 15% bentonite clay by weight ), so pretty rough stuff in comparison to the petrobond. I figured there would be a number of trials to get things sorted out and green sand Is cheap and easy to re mull in comparison. If I could get my hands on some finer silica sand locally I’d stick to green sand. Petrobond does give a nice finish but it’s messy and expensive.
After this attempt I shrank the width of the cores by 2 mm on each side and didn’t have any further issues with run out in these areas.
The next two later castings were plagued by, as it turns out, core moisture. I don’t have photos of those but the top of the castings looked like Swiss cheese and internally there was evidence of gas pocket formation. I should have realized what was going on sooner, particularly from earlier comments…

On the fourth attempt I baked the cores at 400F for an hour just prior to inserting them into the mold. 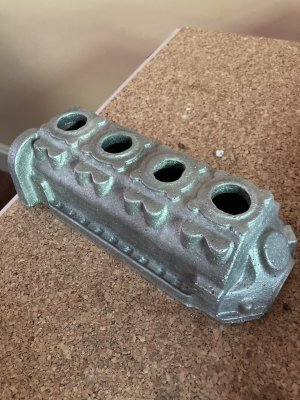 That did the trick, I just wasn’t getting the cores dry enough. This was something Green Twin mentioned earlier so thanks for that tip. The weather has also been extremely humid lately so leaving the cores on a shelf for days before a casting session probably wasn’t a wise move.
After some light skimming of the casting the metal appears to be generally good porosity wise. I used a 160 mm length sprue, 8mm in dia at the bottom and 16mm at the top, with a pouring basin. This arrangement was easy to keep filled throughout the pour.
The metal itself came from eBay ingots so who knows what it actually is.
The surface finish is quite rough, but it’s homebrew sand so not unexpected. Also the pour temp was higher than usual. It was at 1475F when the crucible came out of furnace so probably 1450 by the time it got transferred to the pouring holder and actually poured. That’s higher than recommended.
I added a riser shown below at the front of the casting as there is a lot of solid metal in the front main bearing support. The original professional casting had bad shrinkage issues in this area. 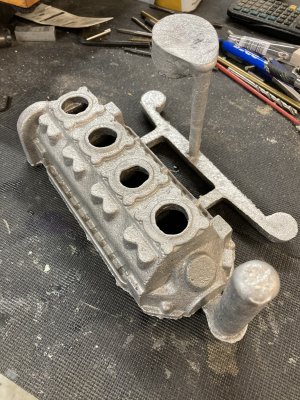 In future castings I‘ll also add a riser to the rear end of the casting as there is a lot of metal in the cam gear housing and there was shrinkage evident there, though not critical it looks like a bottom rear corner of the casting got pulled up slightly, shown below. 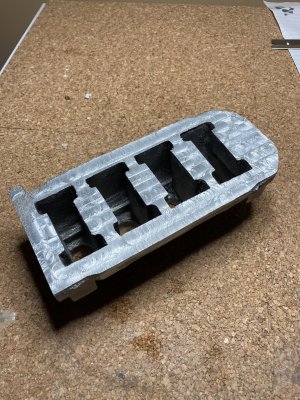 The plan is to continue machining this casting, drill the crank and cam bearings, the cylinder bores etc. and just make sure that the internal dimensions are basically OK and things line up.
I think the issues of the original casting with the crank supports, oil ways, and the flange for the bolts to hold the sump are addressed but I want to make sure there isn’t anything else lurking.
If everything checks out on this one I’ll do a casting in oil sand to improve the surface finish.

You have more patience than I could muster. Just my experience with the original castings. When i bored for the cam shaft it came through at the front. Looking at it I think there was not enough metal there. A guy I know also had the same experience so maybe check it out
Bob
M

Patience indeed, but very interesting. It reminds me of die casting, something my family was heavily involved in... I'm curious what type of aluminum you are using. I know we used 356 as one of the dominant alloys in die casting, but I'd be hard pressed to say what benefits it has over other types. And bear in mind that those benefits may only be applicable to the aluminum being forced into a steel cavity at great speed through the use of a high pressure ram. Investment casting is a different beast.

Casting compositions are described by a three-digit system followed by a
decimal value. The decimal .0 in all cases pertains to casting alloy limits.
Decimals .1, and .2 concern ingot compositions, which after melting and pro-
cessing should result in chemistries conforming to casting specification
requirements. Alloy families for casting compositions include the following:

Nice casting and molding work.
You are getting there.

I bored out the casting for the cylinders and right off the bat hit a snag. The new casting shrank in length by 0.075” overall with each of the cylinders about 0.025” closer together. So on a fixed 1.6 inch spacing on centers they become misaligned with the raised cylinder seat features on the top of the casting. 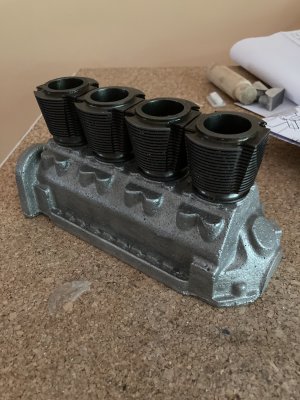 The rear cylinder only just fits on without breaking through the rear wall. Well this was the reason to keep going with this rough casting, to find this stuff out. 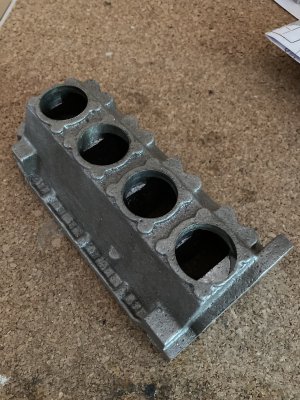 A bit of a cluge but I‘ll modify the existing pattern by adding 0.025” spacers between the cylinders for the next attempt. 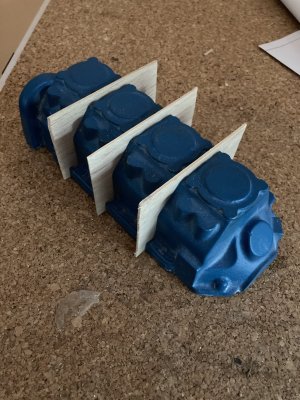 I also made a new pattern for the bearing caps I need before I can drill for the crankshaft. For some reason I hadn’t realized the bolts are only 4BA ! (I’ll use 6-32 UNF) and I had made the bolt head seats far too large, they would have looked ridiculous, not that anyone would see them…. 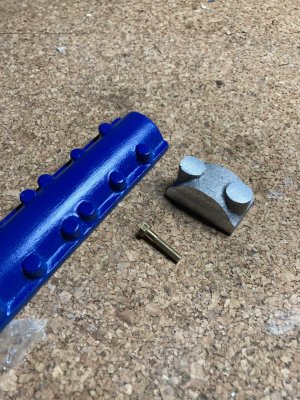 I find it hard to visualize this stuff until I start getting parts together. The drawings assume you have all the castings so there are very few dimensions to go on.
Regards,
RS.

Are you going to machine the casting complete before casting another. Never know what else will pop up. This is interesting to me. Thanks for taking the time to take pictures and share them here.
R

Yes, that’s the plan. I’d like to get the crankshaft bearings drilled as well as the camshaft. Then I can mock up the gearing at the rear of the engine and check the gear housing for clearances etc. Obviously the crankcase casting shrank in width as well as length, I measured it as about 0.035”, so that needs to be accounted for. I’m not intending to alter the pattern for this, I’m hoping it can be accommodated into the existing arrangement. Anyway we shall find out…

I cast the crankshaft bearing end caps today from the new pattern. My first attempt at this resulted in some shrinkage along the top of the casting so I added a 1” dia. riser about half way along the pattern and that fixed the issue.
It’s amazing to see the metal collapse down the riser after the pour. 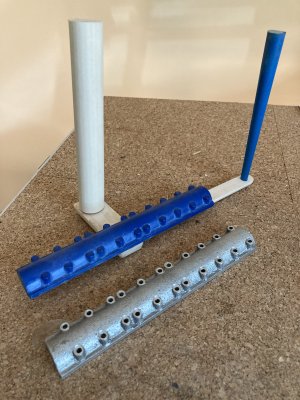 l worked on the ‘shrunk‘ casting a little more and drilled through for the cam shaft.
All seemed well but I realized the foundry that produced the original casting I am now using as a pattern made the gear housing dimensions exactly to the drawing dimensions. This means I need to enlarge them, widen it essentially, to compensate for the shrinkage.
I decided to just make the cam gear housing wide enough to machine down as required to match my oil pump housing assembly ( another saga pages back) rather than attempt to ‘size’ it to the drawing dimensions. I think Les Chenery may have done something similar on his original design but not sure.
So with the length of the casting extended overall by 75 thou and some general enlargement of the cam gear housing I had another shot at it. 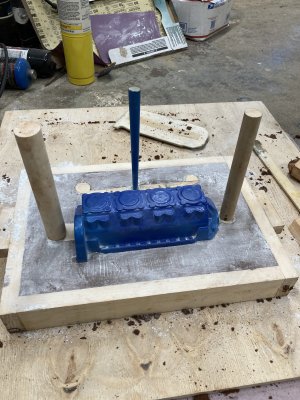 This shows the latest sprue , gate and riser arrangement. On all previous casting attempts there was quite severe shrinkage in the cam gear housing at the rear of the engine ( left side of photo) . I found that gating the riser only to the bottom of the casting was not effective enough, so after the cope was rammed up I broke the sand out between the riser and pattern almost up to the height of the pattern to allow the riser metal to reach further up. That seemed to work better though there was still a little shrinkage in that region. Maybe a bigger riser is needed.
After quite a bit of machining of this casting I have seen very little sign of porosity so I think the sprue arrangement is working well.
After boring out the resulting casting for the cylinders I was relieved to find the modification to lengthen the pattern was pretty much spot on with the cylinder bores on 1.6 inch centers. 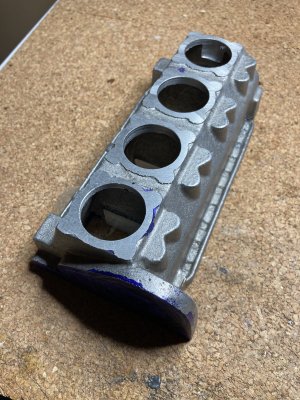 The flanges for the cam gear cover / oil pump assembly are large enough now.
Milling out the crankshaft bearing supports here. The webs line up well with the oil feeds on the side of the engine and most importantly it is possible to drill the oil feed to the front bearing. This was a big problem with the original casting. 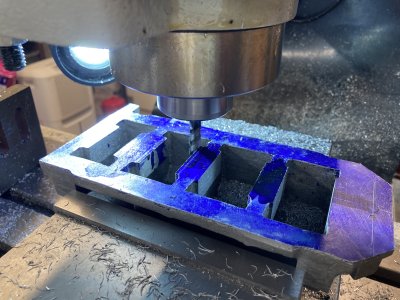 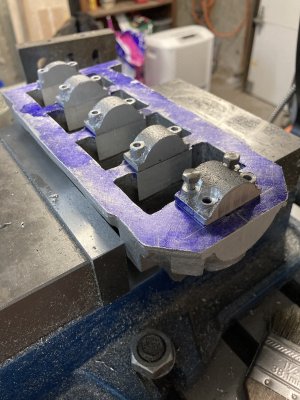 Well l‘m keeping fingers crossed but I’m hopeful this is the final iteration. My small workspace is beginning to fill up with prototype Gypsy castings ! 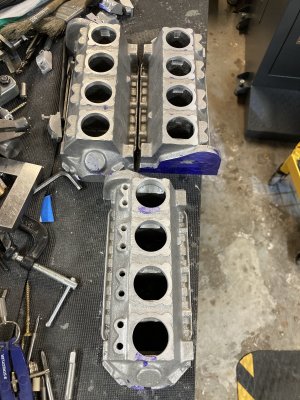 Regards,
RS.
You must log in or register to reply here.