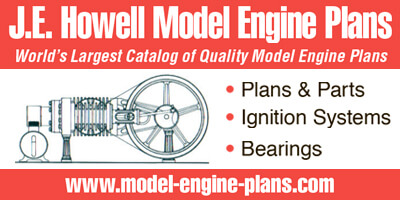 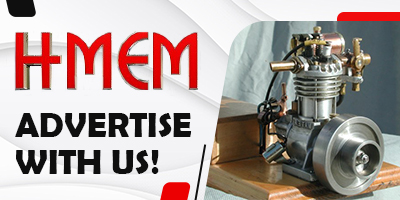 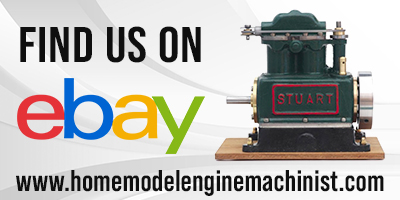 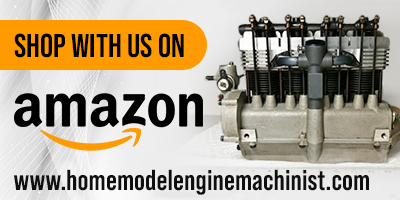 Thanks, yes, I see you checked the dimensions on the main drawing and accounted for it. I did notice that the taper angle was a bit shy of 6 deg with a taper length of 0.625”. Just to add to the fun the prop boss that sits on the taper is drawn as 0.538”. If you add the 0.063” discrepancy to that you get 0.601” which is magically the exact taper length to get 6 deg. Does make you wonder..
Anyway, I will make the taper length 0.562” and use some other angle (like 6.4 deg) to make it work.

A little further down the path with the crank shaft after a fair amount of time at the lathe knocking the corners off. There are a lot of oil ways to drill yet. 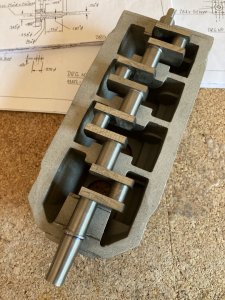 Before completing the crank I want to make a start on the top case. Skim the flange flat and mill the bearing supports to size.
Something I noticed on the casting is there appears to be some shrinkage in the casting front bearing support. On one side it looks to have dropped about 1/16th” below the flange. 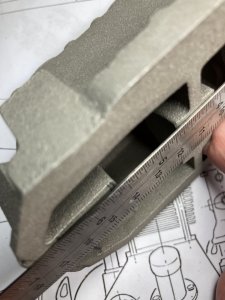 If the casting is a problem, i.e. it doesn't clean up, you could build it up with Technoweld, Lumiweld or similar antimony based aluminium 'brazing' rods.
I've used these rods over several years, mostly on motorcycle parts, with great success.

Peter Twissell said:
If the casting is a problem, i.e. it doesn't clean up, you could build it up with Technoweld, Lumiweld or similar antimony based aluminium 'brazing' rods.
I've used these rods over several years, mostly on motorcycle parts, with great success.
Click to expand...

What method of welding do you use?

The antimony based rods aren't really welding, more like brazing.
I use a propane torch for heating.
W

Peter Twissell said:
The antimony based rods aren't really welding, more like brazing.
I use a propane torch for heating.
Click to expand...

The only problem in using those type of rods is that it is almost impossible to do any future TIG welding without removing all traces of it in close proximity.
Paul

I wasn't aware of that, thanks Paul.
In this case, I presume there is no plan to carry out any TIG welding on the crankcase casting.
R

OK, I skimmed the flange of the upper crankcase and as expected there is an area of the front main bearing support that remains below the level of the flange. 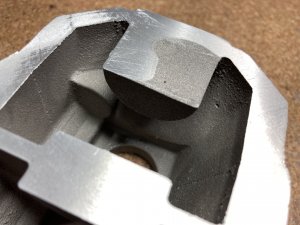 There is still maybe 0.02“ that could be removed but the depression is a good bit deeper than that. As kindly mentioned above this could be filled in relatively easily.
Having stared at this casting for a while and having looked at pictures of the original casting, as well as the drawings it became apparent that there are some significant differences which I think are worth noting.
The big difference is in the bearing supports. 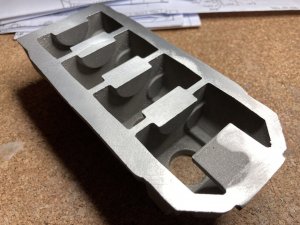 The three central bearing supports in the new casting consist of semi circular sections supported by webs across the case. The front bearing support is a semi circular section that cantilevers out from the front of the casting. There is no material or webbing underneath it for either support or to accommodate the cap screws.
For comparison here is a photo of the ‘original‘ Chenery casting at a similar stage of the build. 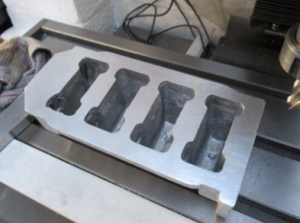 Notably, the bearing supports extend right down to the ‘top’ of the casting and the webs are a good bit wider. The front bearing is basically solid. There is plenty of material and depth for the bearing cap screw holes to be drilled into. I’m not sure the same can said for the new casting.
There are some differences on the rear of the casting. Here is the new casting and the original below. 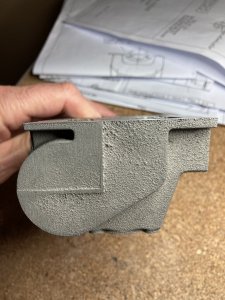 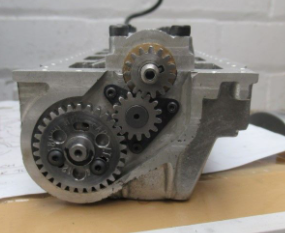 There are two ‘buttresses’ on the right side of the original casting below the flange to hold two studs. The studs are not on the casting but you can see the tapped holes for them. These buttresses are missing from the new casting.
Also the flange on the left side is thicker and joins to the cam gear housing to provide material for the two studs on that side.
In contrast the flange on the new casting is oddly much thinner in this area and does not meet up with the gear housing until much further towards the center, with very little material for robustly securing the studs.
I’d be very interested in hearing from anyone who has built an engine with this casting to hear how they worked around these differences.

Note: The ‘original’ casting photos are borrowed from a really excellent thread on the Model Engineer forum by David K.

Sorry to read of your casting woes.
I have used the aforementioned aluminium 'brazing' rods to add a lug to a casting (motorcycle gearbox) which was then drilled and tapped and has supported the clutch cable loads for over 10 years use.
R

Thanks, yes, I’ve used those rods once before to fill and re drill a misaligned threaded hole on a previous engine. The brazed metal seemed much harder than the cast aluminum and took the thread far better.
I’d definitely consider that to possibly fix the stud issues at the rear.

My chief concern are the crank cap screws on the front bearing. Based on the drawing dimensions and some measurements they would be breaking out of the underside of the casting after a depth of 0.275”. They need at minimum a depth of 0.438” so they would be fully threaded for only about 60% of their length.
I wondered about over sizing the holes for these screws then try brazing some plugs in long enough to take the screws. What could possibly go wrong !

The webs would help on the other bearings, they are 0.17“ wide and the screws threads are 4 BA so drilled for 0.118”.
The problem here is that there are supposed to be oil ways passing to the bearing shells from one side of the flange through the web. I’d guess that’s why Les made the webs as wide as he did on his own casting to allow for room to get a drill past the cap screws.
In fact due to the novel front bearing support arrangement it’s not going to be easy to get an oil way to the front bearing shell. Maybe a tube to cross the gap….

This casting has the feel of a prototype that hasn’t had the bugs taken out yet. I’ll probably find a shaft passing through the spoke of gear wheel next.

By way of an update on the Gypsy castings.
I contacted the originating foundry to ask if it was possible to modify the patterns and try another run. It’s been about 10 years since the original casting so I was not overly hopeful but they did reply and asked for details on the modifications, which I have passed along to them.
I had hoped that only the upper crankcase casting needed rework but there are issues with the sump as well.
Anyway, I await their response and quote for the work.

Your casting looks similar to the Hemingway casting that I have (pictured). There is insufficient meat on the casting to drill the oil holes for the two end bearings. However, I'll only ever run the engine for short periods (if I ever get it to run) and I'll rely on enough splash cooling for those two bearings.

Thats interesting, I didn’t know Hemingway ever sold the Gypsy castings. I built the Aero V twin from them.
I wonder if they also tried to recreate them from the drawings and got similar results.
C

Hemingways don't list the Gypsy on their website but supplied a set of three castings to me as a special order about 18 months ago. The castings are fairly good in themselves but there are some simplifications/omissions in the patterns - no showstoppers though. If anyone's interested I'll post a summary.

I really liked your Aero V twin - must finish mine someday.