So here is a screen shot of the read out. As you can see when manually moved the movement is .2deg. 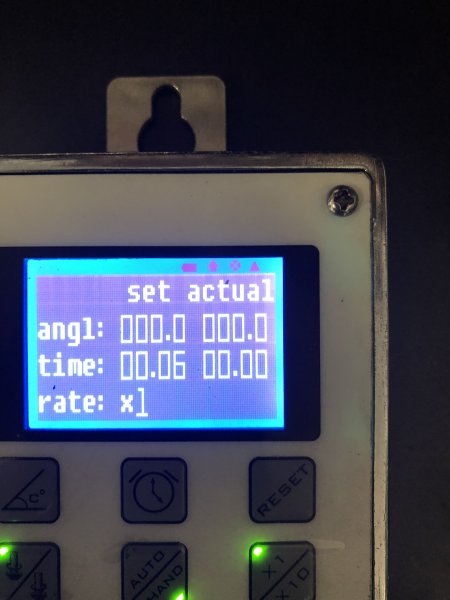 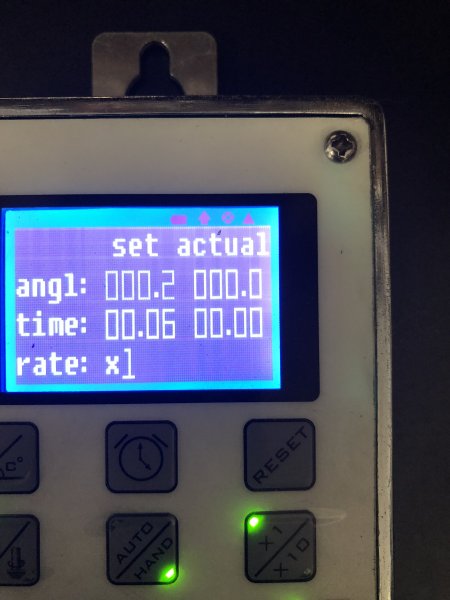 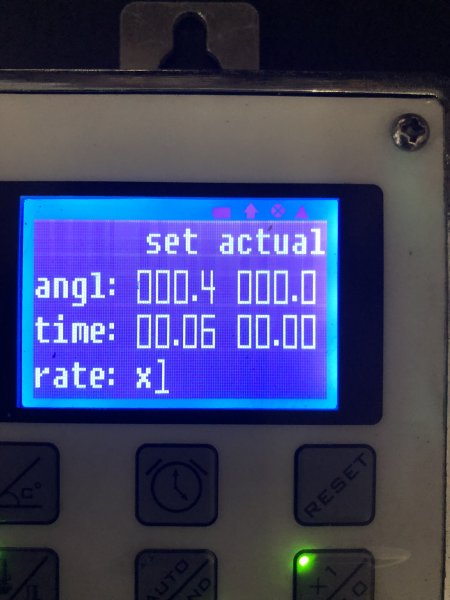 I can say after a 360 deg revolution it is dead accurate back to the same spot. But the smallest movement is .2deg

So help me out here guys. If we only see One decimal place and The division is 2. That means .2 of a degree which means you could not do half degrees it would only be in divisions of .2 . IE 25.4 or 25.6 not 25.5deg. Which for most things we do it’s probably not a problem. I have cut squares and hexes that were bang on .

Possibly, but I see there are more buttons on the controller, is there a 1/2 or something like that? So maybe you set zero, spin to 50 degrees then hit the 1/2 button and it goes to 25.5? I assume you're hitting some sort of jog button which may have its' step size set to 0.2 degrees but other functions may have smaller graduations. This makes sense so you don't have to hit the jog button 100 times to move 1 degree if it was set to 0.01 instead.

Unfortunately no. As you can see there are 3 Spaces to the left of the decimal place and only one afterward. And the smallest division that last decimal places is .2 . I am not sure why they built that way seems to me.1 would make more sense
A

I don’t see this as being an issue. Everything I've done on a manual rotary table or indexer (Speedex) is with whole angle increments.

Jmccrack, Thanks for posting those screen shots and additional info.
A

AzBob
Great stuff. Let me know how it goes. Are used mine last night to machine some sectors on a plate works really well. But of course with no manual of any kind it’s difficult to know what some of the other features are. When you get yours and start using it let’s stay in touch. I could sure use some ideas on how to use it even more
R

Jmccrack said:
AzBob
course with no manual of any kind it’s difficult to know what some of the other features are. When you get yours and start using it let’s stay in touch. I could sure use some ideas on how to use it even more
Click to expand...

It would be nice if some one would do a tutorial video on how to use it. The manual leaves a lot to be desired and in my case pretty much useless. I picked up one at the tent sale with a bad power supply regulator. Now that it is repaired I am having some issues getting it to operate.
A

Received the T1191 on Monday. It was DOA. Power Supply was bad, no output voltage. The unit has been sent back to Grizzly. They are going to test and send out another one. I did like the looks of rotary table and the motor drive. Will see how this plays out.

Please stay in touch. I am using mine a bit more now
A

Jmccrack, While I was looking over the unit, I noticed that the hand wheel micrometer dial was graduated in 2 minute increments and the steps of the motor appear to be 2 minutes as well. That would seem to indicate it could indeed do .5 degrees which would be 15 steps at 2 minutes each for 30 minutes or .5 degrees.
R

To be fair, mine was acquired at the September tent sale for a very reasonable price (no power up) I had to replace the low voltage regulator on the main circuit board (8 pin dip, cost $2.87) So now it powers up but no operation of the stepper motor and when reset is pressed it does not reset. Otherwise all other functions are working so back to more investigation. For the most part I find the table fairly well constructed but the engineering of the pendant leaves a lot to be desired. The first problem I see is with the rotary control/switch. Having such a large knob on a very light control that has to be pressed for some functions makes for a very weak design and susceptible to easy breakage. Perhaps once I get it working I may install a new HD rotary control and install a separate switch. Also having the leads coming out of the case and the way they are restrained was poorly thought out. The next problem is inside the pendant. The main circuit board is poorly supported and is actually forced to be arched by the way it is attached. Also I was not impressed with a pair of caps and resistor that were hot melt glued to the top of the board and wedged between the corner of the display and one of the cast is body board stand offs. Needless to say, the glue was not holding anything anymore which allows the caps to flex the leads going to the board. Eventually this will break. Unfortunately, there really isn't enough room for this mod that was done to fit properly in the confines of the case. Also the back cover to which the main board is attached is very flimsy. So future plans are for a new machined main case, a back cover and a connector for the leads to the motor/encoder at the case.

As a side note, I get some fantastic deals at the tent sales and most of the time have the problems resolved in a half hour or less. At the same tent sale I picked up a complete never used H8203 drill sharpener for under $200 that would not power up. 5 minutes with a soldering iron and I was up and running. Does an awesome job sharpening drill bits and the collet system it uses is ER20.

Looking at The motor you see two connections, also note the small hockey puck with the rear set of wires, that is a rotary encoder. Be it servo or stepper motor, the encoder is what is feeding position info to the control box.
I use a 9" rotary table and often have chatter when using it to mill arc's and such. I would like hear the results when tis unit is used to do the same. The Digital is the best for indexing, chatter not a real issue then
R

Time for an update on my rotary table. I have traced the problem to a failed motor controller IC, Alegro Micro Systems A4989. It would appear the cause is related to the construction of the board (see previous report about the construction) These are not expensive (couple of $$) but so far it looks like it is going to be 6-10 weeks before I can get a replacement. I have run across several references to counterfeit ones on the market so I am being careful. Should anyone happen to have 1 or more, or a source they trust I would be most grateful.

I did talk to Grizzly at length about any spares for these and although they have part numbers they have absolutely no spare parts of any kind for these tables.

Update on the dead T1191 rotary table I returned to Grizzly. Apparently the power supplies have been a problem. Until this is resolved with the supplier, there will be no more shipments. Am being refunded my money and will wait until the updated units arrive. No dates were given.

Wow good to know. I don’t use mine a lot but so far no problem I will start using it a bit more
R

Mine is back up and running again. Picked up a few extra A4989 controller IC's just in case since the shipping from China was going to be the same. Now it is time to learn the control functions.

So I realise this us an old thread but I recently purchased one of these. The manual says it can go up to a 15X feed rate but mine will only go from 1X, 5X and 10X. This is far too slow for my needs. Is there a way to reprogram the controller or something? I may have to return it and go with the Sherline..
You must log in or register to reply here.
Share:
Facebook Twitter Reddit Pinterest Tumblr WhatsApp Email Link