Below a 15kW circular saw spindle I designed and built for sawing off aluminium casting sprues using a 150kg payload robot.

Note the close proximity of the working end pair of angular contacts (I have switched off a lot of the detail layers as it gets far too busy) - the fit up of the assembly is determined by the spacer between the bearings. If it was a grinding spindle I'd have gone for spring loading. 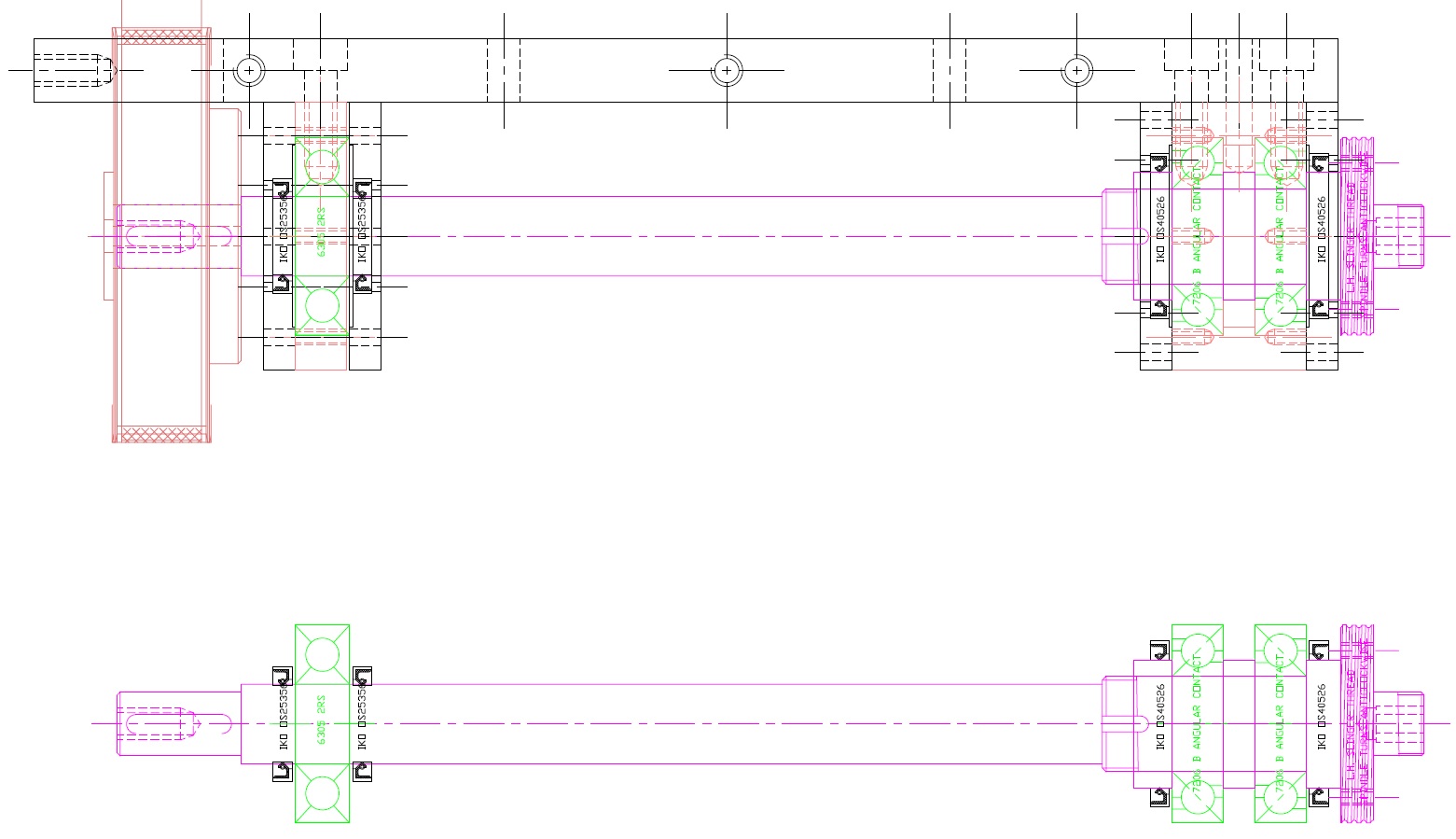 and just the working end 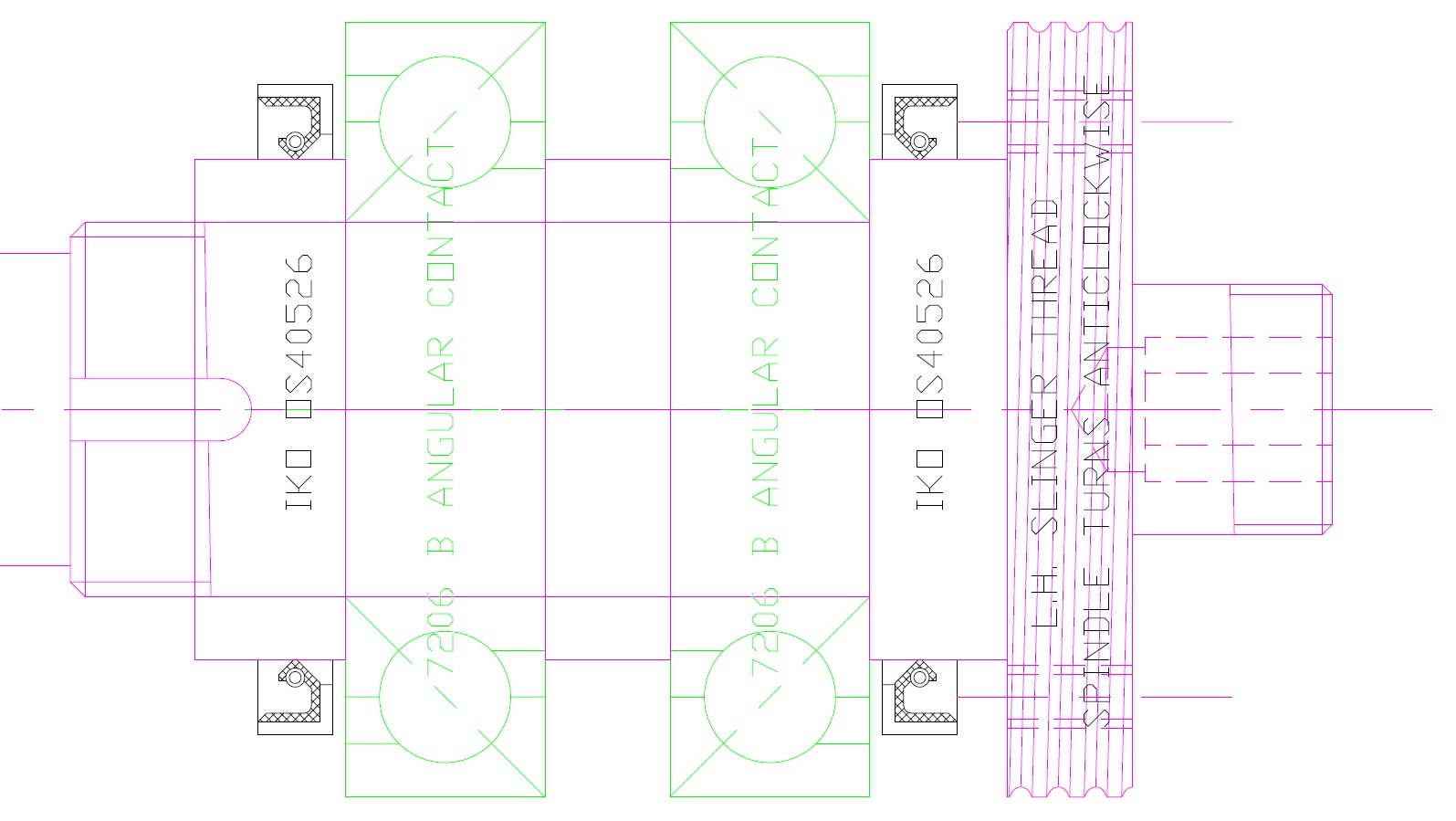 But this outlines the general principal for any machine spindle - a pair of bearings close together at the working end and an outrigger support some distance back for stability.

If you were to simply place a bearing at either end, expansion and contraction are going to play havoc with the clearance and hence inconsistent play in the spindle.

P.S. The seals are to keep coolant (souluable oil) out rather than lubricant in.

In the case of a floating rear bearing arrangement that is retained by a spring collar or spring washers to allow for thermal expansion, can you suggest a typical dimension that the outer casing would have to be in order to achieve the right slip fit of the bearing? For example if the bearing OD was 1.5000" what should the casing ID be? This mystifies me. I would think loose enough that it can slide & friction is not influencing the spring force, but not too loose that the spindle shaft itself can vary. And then as temperature is increasing in operating conditions, is the bearing growing faster than the casing (thus reducing the annular gap) or roughly the same rate?

Is there any kind of rule of thumb or formula as to how much spring force is required for a typical model engineer grinding spindle, or one would have to know a whole bunch of other parameters beforehand? I've been able to take a rough guess just eyeballing spring arrangements in other spindles, but that's more just copycat design & hoping that person got it right.

Petertha, You are thinking of an electric motor which has a bearing at opposite ends of the shaft and typically uses a wave or waffle spring to allow for thermal expansion and contraction (shaft and or housing). In that application the bearing outer diameter is a slip fit in the housing and a push (or press) fit onto the shaft.

With the outboard support design you secure the bearing outer but the shaft is a slide fit in the bore - no need to spring load it.

If you wanted to spring load the angular contact or taper roller opposed pair at the load end, I would go for 10% to 25% of the bearings permissible axial static loading as a rule of thumb.
or
You can consider the taper or angular contact as a frictionless trig problem and calculate how much axial preload is needed to resist the radial loading to prevent such forces from opening it up. With a pair of angular contacts that would be ±70% of the radial load.
But then as you say - you need a bunch of other data.

I made the wheel end bearings fixed on the shaft and in the housing with shim preloading. The drive end pair of bearings are fixed to the shaft but can move in the housing. I did it that way to allow for any heat expanding the shaft. I must admit that the wheel end does get a little warm to touch, but so far nothing untoward has occurred.

Hot is actually good - as explained to me by Cincinnatti - if the oil is being worked close to its maximum shear strength - thus supporting the bearing as near clearance free as possible - by wedging action (applies to ball bearings also) then the oil is going to get quite hot.
Like I said in an earlier post 65°C - that's hot enough for you to place the palm of your hand on without burning yourself but just too hot to actually quite keep it there. That's how the old hands at Cincinnatti checked the temperature as a quick and dirty check in any case - they had temperature measuring equipment but the palm of the hand was their ready reference.

If hot is good then just wondering why my Quorn grinding spindle barely gets warm even after an hour or so in use, is the design somehow lacking or poor ?
G

retailer said:
If hot is good then just wondering why my Quorn grinding spindle barely gets warm even after an hour or so in use, is the design somehow lacking or poor ?
Click to expand...

No
! A Professor and principal of one of the most prestigious schools cof engineering and who was engaged in the the Manhattan Project was no body's fool

Perhaps it is inapppropriate but several of us went on a week's visit to the Hebrides to see what Man had acieved in the Stone Age and in Megalthic times in science with all these querns and things.
This was all in 40000 years BC and frankly, I didn;t think that we had progressed that much.
I was recalling the pithy words of the late Don L Ashton who remarked of those who continued to ask 'the same silly questions over and over' and in return to receive the same silly answers!
Considering that Don was a world authority on tugs and Stephenson,s and Walshaert,s Gear, I've recalled that this question has been raised repeapeatedly in one for or another here and elsewhere.

.Elswhere' was actually mentioned by Chaddock himself when he published the Quorn articles in the '70' and Martin Cleeve wrote on the heating of bearings far earlier in the 50's and 60's.
With the arrival of my SECOND Quorn kit, it is even simpler and more versatile- comtrary to the assumptions of the present particpants.
Standing back somewhat, things here could do with a re-think

So Sorry! if I've ruffled a feather or two
J

stackerjack said:
You say that when bearings are pre-loaded, the balls will always be rolling. I cannot see how the balls will roll on two surfaces of different diameters, being the inner and outer races.
Click to expand...

I can understand how you would think that. The key is that the balls aren’t fixed in place. If they were then they would skid. The shaft turns the inner race which will then rotate the balls.
These are then free to roll around the outer race at that speed.
It’s like riding a bike. The crank moves at one speed and the wheels at another and the bike moves along to suit.
You are of course right that there is a very very small amount of slipping due to friction, different sized balls and races etc.

This GIF assumes some axial load hence the balls are rotating crabwise between the actual points of contact.
However there is a difference in velocity elsewhere up the grooves but the velocity difference is small and the wedging properties of the lubricant (film strength) do the actual heavy lifting.
A ballbearing running without any lubricant flexes the steel of the balls and raceways at the compressive stress of the material until the load is supported by the stress x the area - this leads to rapid bearing destruction.
A taper roller runs much the same way but its line of contact can support heavier dynamic loads.

The fact that a bearing does not get hot is no cause for alarm - but mild heating is normal.

Clearly the amount of heat generated and the ability of its housing and lubricant system to dissipate it means there can be no "rule of thumb" for what temperature is correct.

Not that it really matters, but In the The Quorn Universal Tool & Cutter Grinder book by D H Chaddock (Chapter 7), it says: The design shown in Fig. 45 is an almost exact copy of a design recommended by the Hoffman Mfg. Co of Chelmsford, Essex (now R.P.H.) on page 102 of their technical manual and to whom all due acknowledgements are made.

This spindle corresponds to the sketch shown post #16 upper right section. There is a bit of description about the spring box role in the book, but not much.
Last edited: Jul 15, 2021
P

Dumb question Ken, but do these profiles over the bearings correspond to?

Petertha, Just the mounting holes for the bearing block - details below. 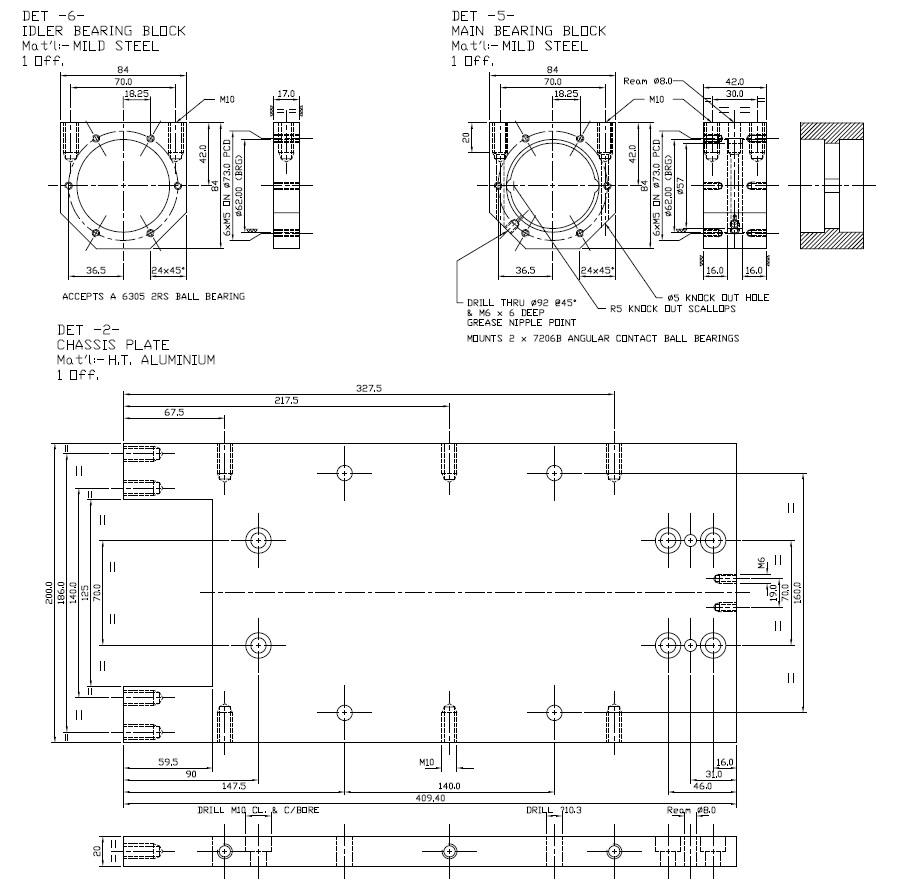 I built this 22 years ago with a 3kW motor goosed up to 15kW (by rewinding and running off 250Hz - I have posted on doing this elsewhere).
Single Phase To Three Phase Rewind - Lathe Uprate
Couldn't afford the mass of a 15kW motor in a robot application.
I know it's been rebuilt once but still running.
The whole GA is a bit busy - but here it is,,, 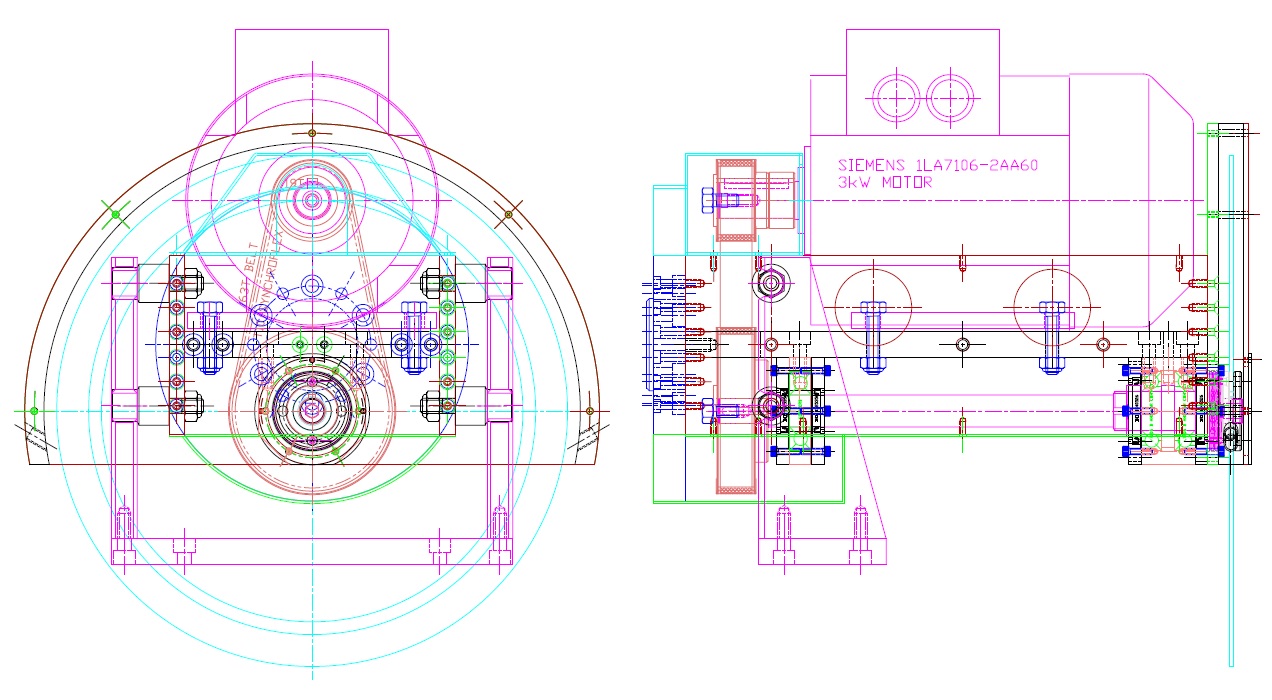