Hi Dan, congratulation for the nice job!
Did you have more information's about ignition system.
On the "Red Devil" model, it's a low voltage ignitor inside the combustion chamber.
What about the "Frisco" ?
LeZap
D

LeZap, thanks for the kind words on the build. This engine uses the low tension ignition as well, I have been using a small 12 volt battery and the primary side of a old ignition coil for spark.
S

danthompson58 said:
I apologize for not sending any more pictures. For some reason I'm unable to load the pictures because it fails and says the file size is too large. At this time I don't know how to re-size the pictures. Any help would be appreciated. I have been working long days in the shop and progress is continuing. I would enjoy sharing and will, when I get this corrected.
Click to expand...

Hi, I paste pictures in a Word doc and then convert to pdf to send by email... Hope that works for this site?
K2
S

Dan, You have built a great model there! Will you disassemble for painting? - or keep it as "shiny metal"? Personally I like shiny metal objects that do real work.
I guess this would look "classic" if it had a large diameter generator driven directly off the crank? (See pictures?) - Or whatever you decide is appropriate? - But then it would have to be painted in the Original Manufacturer's colour scheme - Black coach-lining on Black, with black details, is one style I have used.... Or Green on Green... or grey on grey are other schemes... then they look "industrial"!
(Don't spoil the clean finish you have!). 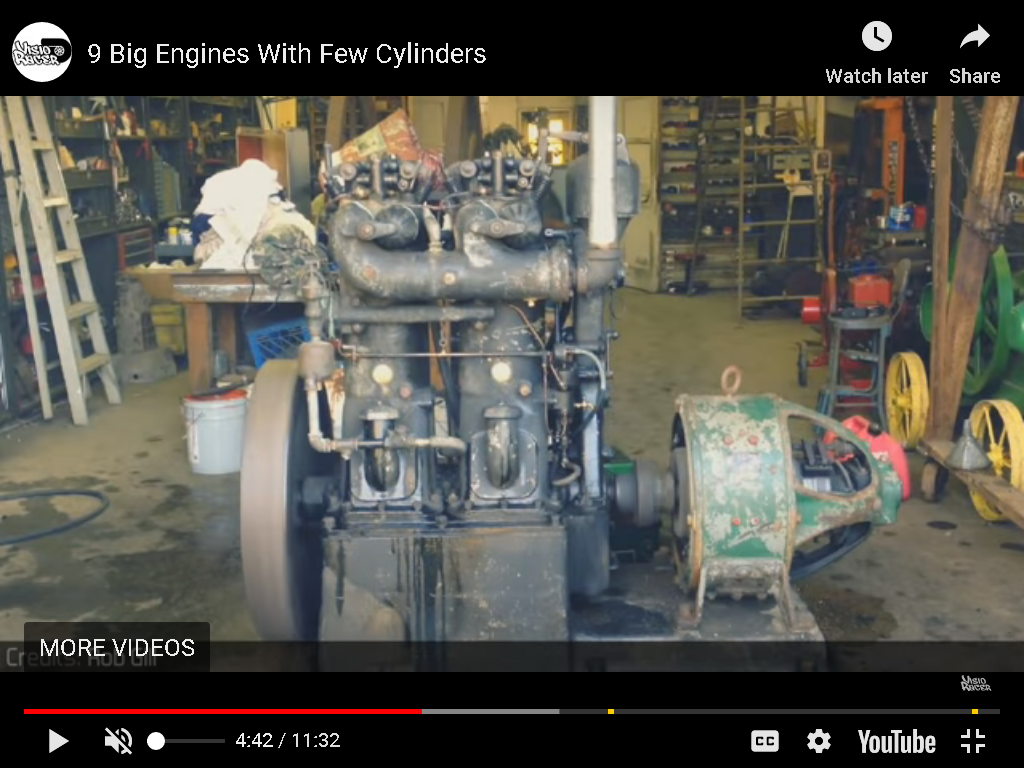 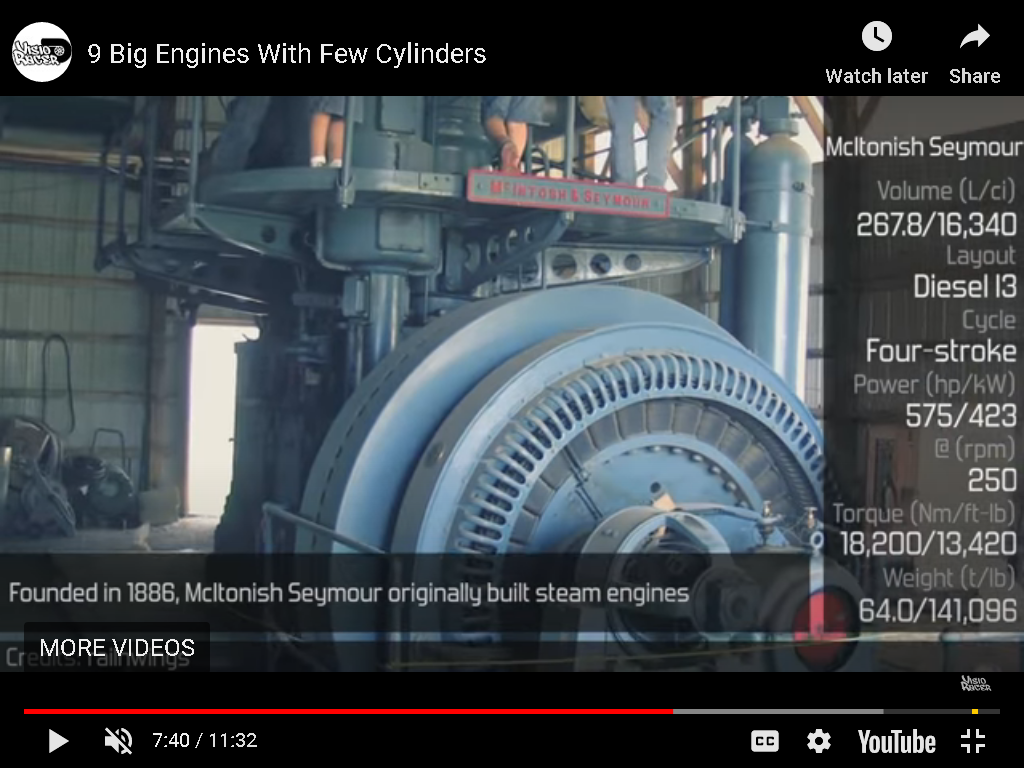 K2, thanks for the information on the pictures. I have been using paint to resize the pictures and it has been working great. After a few months of pondering the paint issue, I have decided to paint it. The original Frisco Standard engines were green so that is what I want to do. I will not paint any of the brass or the crankshaft. The engine has been completely dissembled and I'm prepping for paint, this was a hard decision as I also enjoy the unpainted look. Thanks for your input.
Dan

just came across this thread. The Frisco Standard by Shelf Pet Models is a challenging model to build. Yours looks good! I finished mine around a year ago.
The igniters are challenging to get working dependably,I still need to fiddle with the ones on my engine from time to time.
Last edited: Feb 24, 2021
D

Cddeshon, thanks for the kind words on this engine. This has been a fun build, I have the engine completely disassembled for painting and will start assembling in about a week. I still need to fine tune the ignitors after things wear in a bit. It's good to hear yours is running dependably and would enjoy a picture.
Dan
M

Hello Dan
Mike Frick here, so Im currious what deg you set your cam lobs on the intake and exhuston your Frisco. I have set the intake at 10 deg before top dead center and the exhust I have set at 40 deg before bottom dead center. The engin runs fairly well but Im thinking I can fine tune the cams a little more to improve it.

Marvelous job on your engine. I am slowly getting to the point where I paint my engines. I'm not terribly concerned about the aluminum or brass pieces, but there is a fair bit of mild steel and cast iron on my engines, and very, very slowly they will surface rust if not coated. I'm fortunate that my office, shop, and display room are all heated by my central heating system, so rust hasn't really been a major problem.---Brian

This is the youtube video I posted a while back of my frisco.

Hi Mike, my engine is disassembled at this time, but if memory serves me correctly there is no valve overlap on this engine. It took a bit of experimenting with the valve timing, but the exhaust valve closed at or near TDC on the exhaust stroke. The piston went over TDC with both valves closed and the intake starts to open just as the piston starts down. The valve timing was not set with a degree wheel just by sight. This engine was very easy to start and would idle down nice and slow.
Dan
D

Hello Brian, thanks for the kind words on my engine. I have painted a couple and have left some bare metal and I enjoy looking at all of them. You are fortunate to have a nice display area, as mine are put on a shelf in the shed and dug out occasionally to hopefully take to a show.

Cddeshon , thanks for the video you have a very nice looking and running engine that you will always be able to enjoy.
Dan

This is a good engine build.
I considered purchasing one of those Frisco Standard kits, but considered it a bit too complex for me at this point.

I am designing a single-cylinder Frisco Standard using photos of existing engines, and the original patent drawing for the head.

That head is rather complex to say the least, but they seem to run very well, and it is a nice side shaft design.

I looked at building a Hicks also, and some have been able to acquire Hicks drawings from the Museum in CA, but I have never gotten a response back from the Museum after numerous tries, and so fate has let me to create a Frisco-Standard single (scale 4 hp) design.

In the end, it is working out better that I am making a Frisco-Standard 3D model, since I have come to believe that it is a better engine than a Hicks, and as I mentioned, a very nice side-shaft engine. Hope that does not ignite a Frisco-Standard vs Hicks feud.

Those helical gears were very difficult to figure out, with both being the same diameter, but giving a 2:1 speed ratio.
I got some help from JasonB and friends to solve the gear challenge.

Did you get this engine painted and completed?

These are really interesting engines - I had a Union in a boat once (C1897?) The inlet valve was suction operated and gave a very nice slurping sound. Also M&B spark. Much later would work on a Frisco that rust wedged out barrel and head. A patternmaker mate produced 2 great patterns (He retired from industry at 60 yo and then volunteered with Sydney Heritage Fleet for the next 30 yrs!)- We agonised over busted out parts to reverse engineer the water path in the head. The gas path and cores around the exhaust valve were more straightforward. He even did a resin cast of the name on the barrel and reproduced this on the pattern, and a friendly foundry cast both as donations. Out own workshop machined the parts, including hardened valve seats to allow unleaded fuel. All works well and very satisfying. Creates a lot of interest at shows. 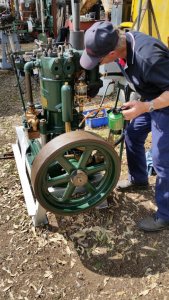 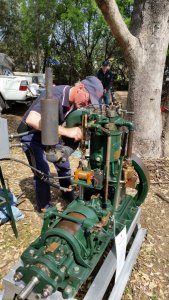