Hi Terry,
If you don't mind I would like to incorporate your changes into a modified version of the engine. I would still keep the original set but could notify potential builders of your changes. Please contact me at my email address so we can discuss it further without having to go through the forum chat.
gbritnell

what kind of end mill did you use to get a mirror surface with no machining marks ?
it seems to me a large diameter tool

The sides of the block were machined next. The features on them are very similar to those on the full-size block, and the realism they add make this engine much more than just another runner. George's attention to detail is especially remarkable since he planned to manually machine the entire engine.

I tweaked the design and placement of some of the features in George's original design in order to limit the number and sizes of the end mills needed to machine it. The radii of the fillets were limited to a minimum of 3/32" to avoid the difficulties and surface finish issues sometimes encountered with tiny long stick-out cutters running on a 5k rpm mill.

Waterline roughing operations with .040" vertical steps were used on both sides of the block. These operations were compiled for 1/2" and 1/4" diameter end mills to leave .007" radial and axial excess stocks for finishing. The final finishing operations were also waterline, but rather than fixed steps they were compiled for .0003" maximum scallop heights using 1/4" and 3/16" ball cutters. The sides' few truly flat surfaces were finally finished using a 3/16" end mill.

Even with my tweaking, simulation results showed spaces between several port-side filleted features that would have required a long reach 1/16" end mill to entirely machine finish. These were manually filed down later using a tiny spherical carbide burr in a hand-held pin vise. The block's total six-sided machining time on my Tormach came out to some 27 hours making it the most complex part I've machined to date.

A fixture plate drilled with the block's bottom hole pattern was also machined. This plate will eventually be used to hold the workpiece for the oil pan while it's being machined. It's also needed to support the block while drilling the angled holes for the dipstick and distributor. The bore for the distributor is especially critical since it will establish the mesh for a custom machined 72 pitch/14 tooth 45 degree helical gear set used to drive the distributor from the camshaft. The distributor bore won't be done until these gears have been machined and are in hand so their center-to-center distance can be verified. The less critical dipstick hole, however, was drilled as a warm-up exercise for the distributor bore. Both holes are to be drilled at 60.43 degree angles, and each is referenced to the camshaft bore.

The angle plate setup used to drill the 3/32" dipstick hole is shown in one of the photos. This same setup will be used later for the distributor bore. After carefully establishing the exact drilling angle, measurements on the exit point of the resulting hole showed the actual angle had ended up 0.4 degrees too shallow. If this had been the distributor bore, the resulting .010" mesh error would have been enough to bind the gears, and the block would have become scrap.

After several hours of detective work, I concluded that regardless of the beefy appearance of my ten pound angle plate, it lacked the rigidity needed to hold the setup angle during the drilling of the tiny dipstick hole. A shimmed support block under the front edge of the movable plate should hopefully eliminate the problem for the distributor bore.

Bead blasting using generic glass media from Harbor Freight hid the machining marks and allowed me to see the places that needed manual touch-up. It also gave the block's exterior a nice cast metal looking finish. Only two operations remain. In addition to the scary distributor bore, the top surface will be faced to remove its excess stock once the liners are installed. - Terry 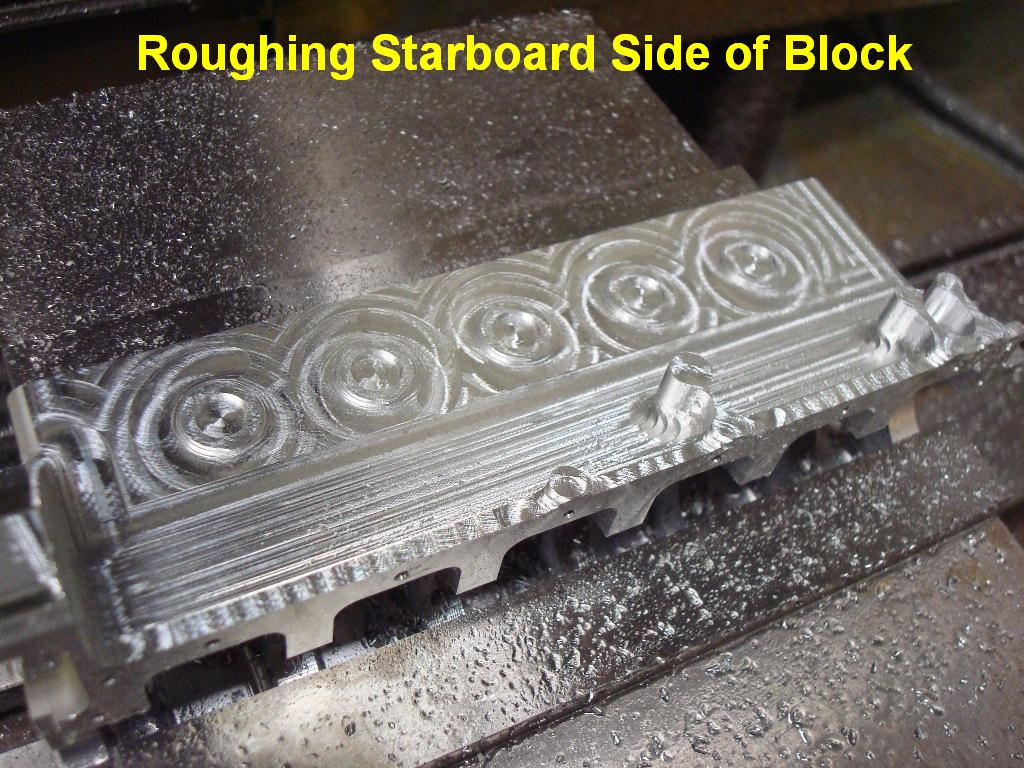 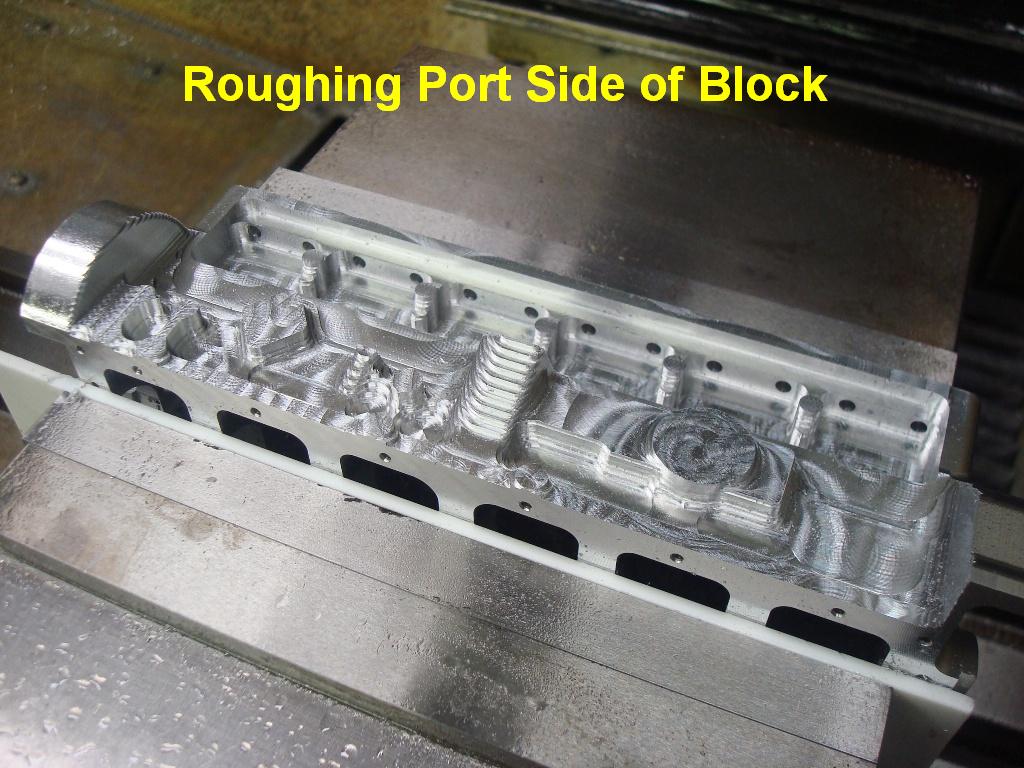 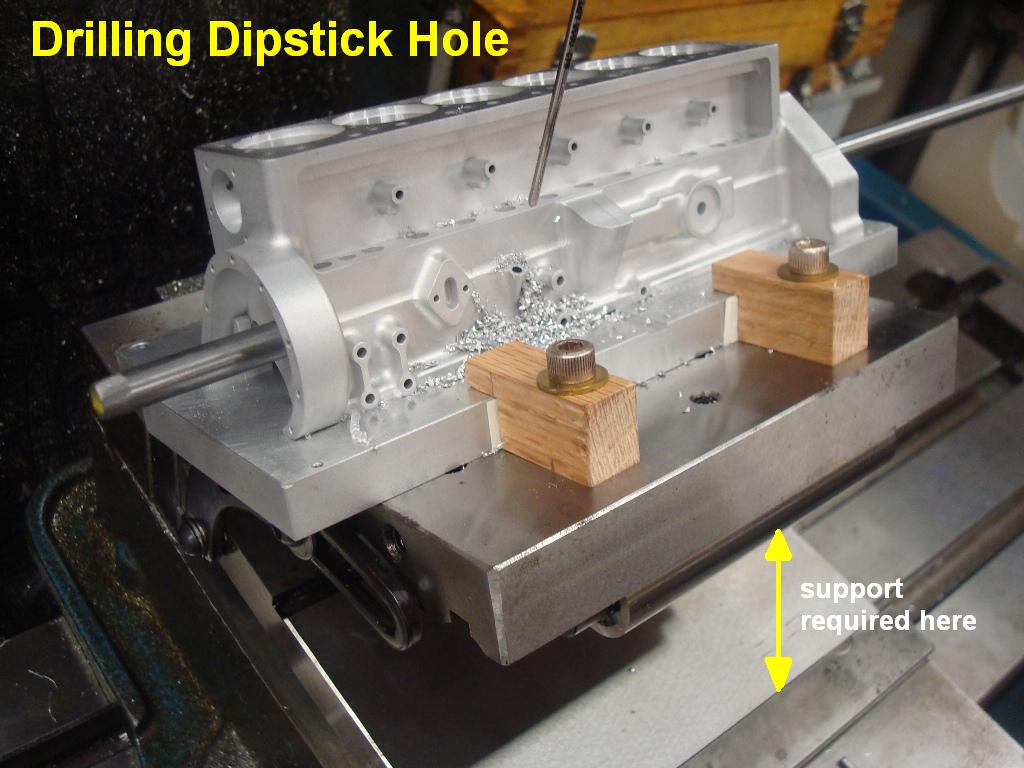 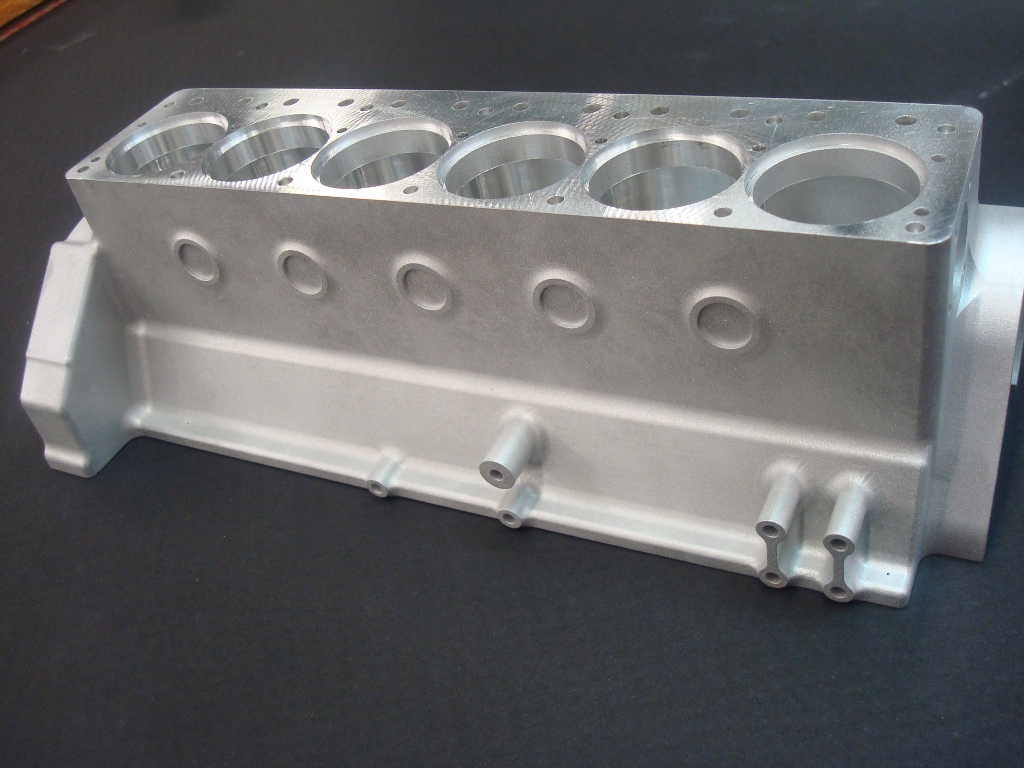 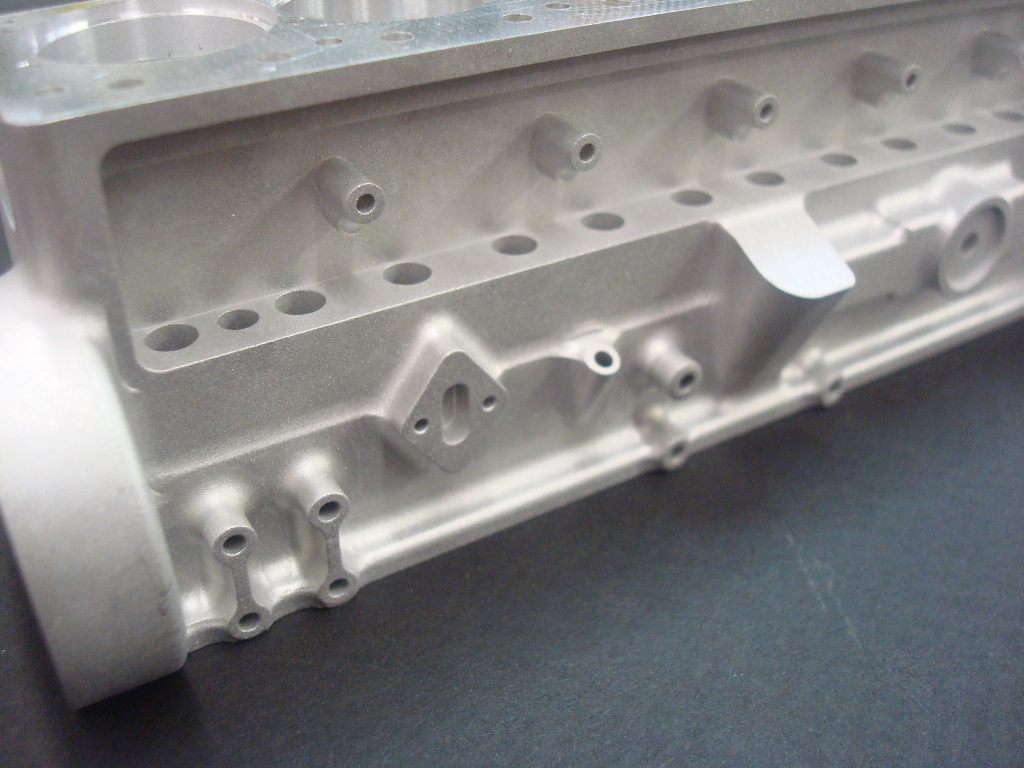 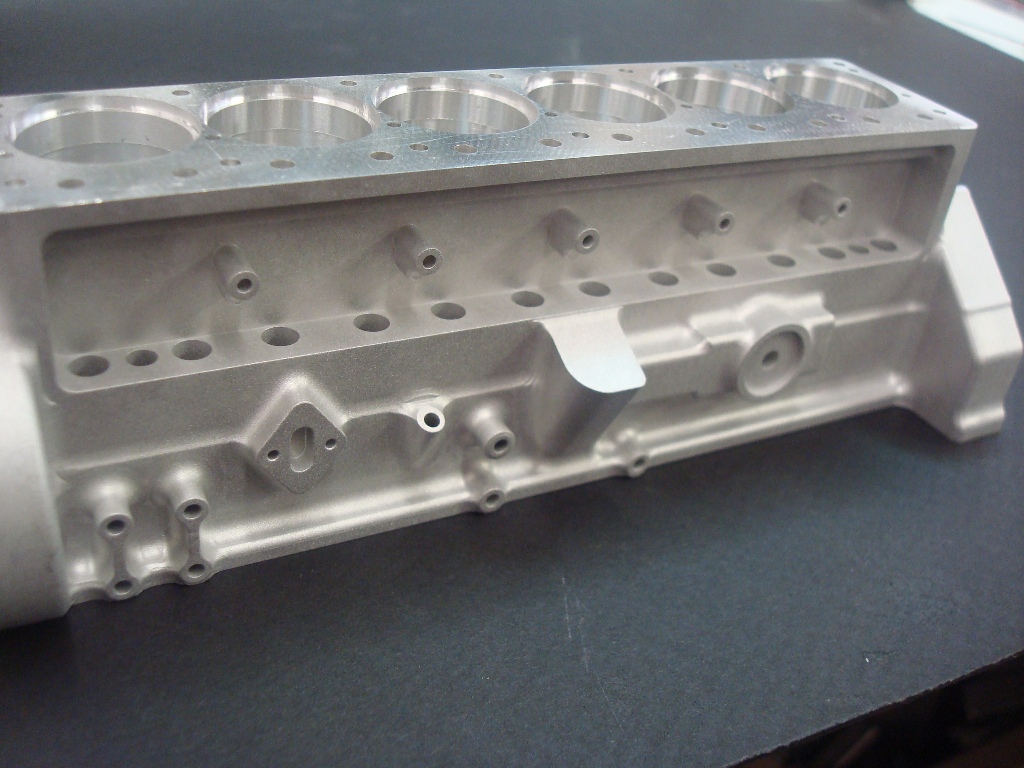 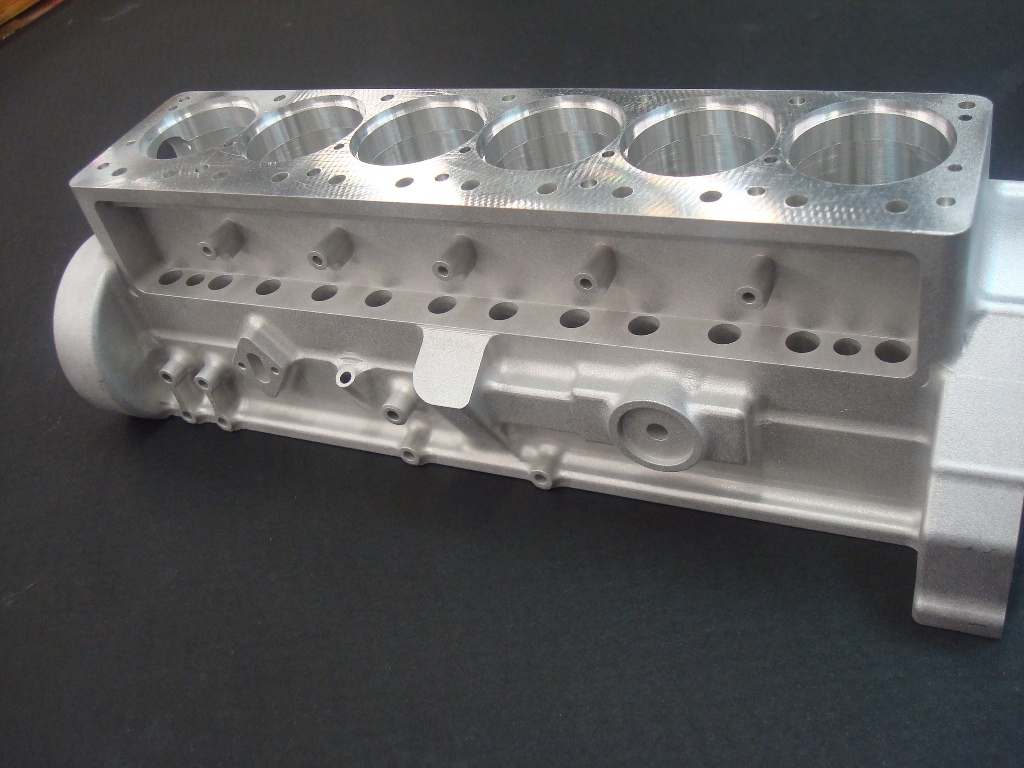 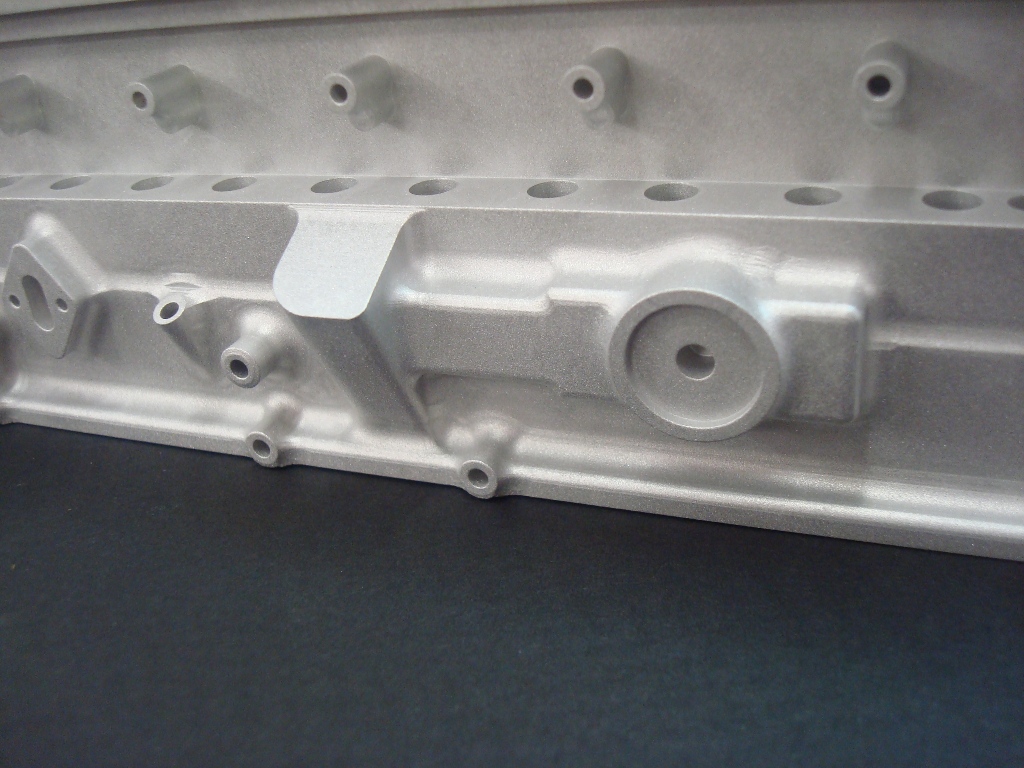 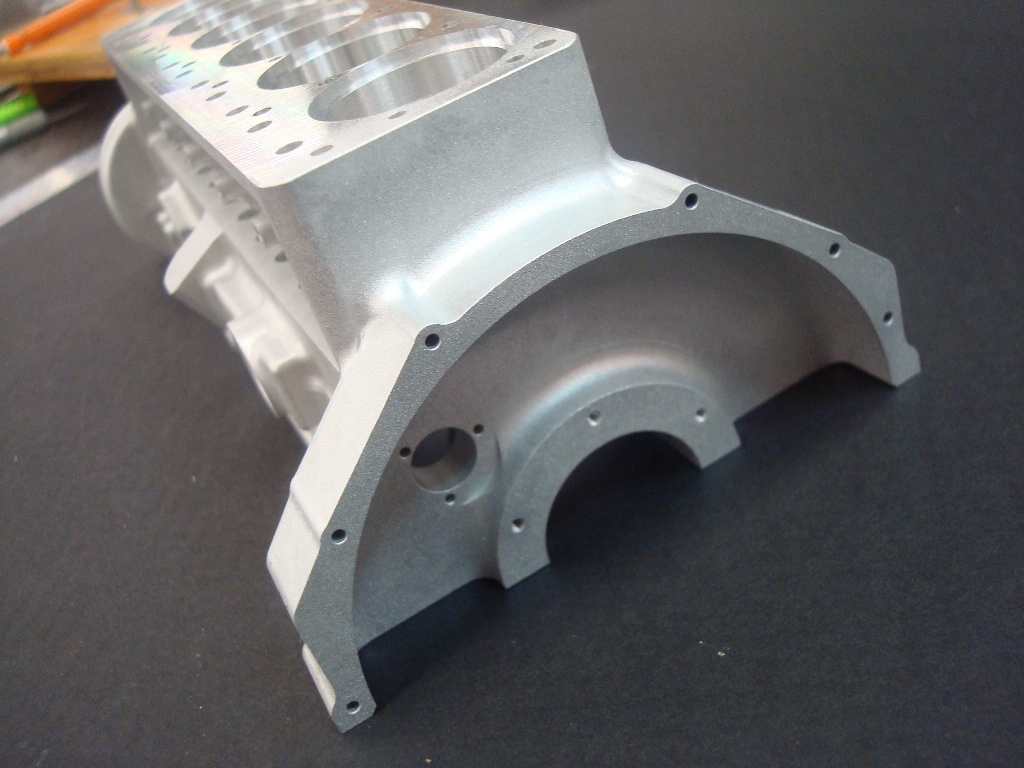 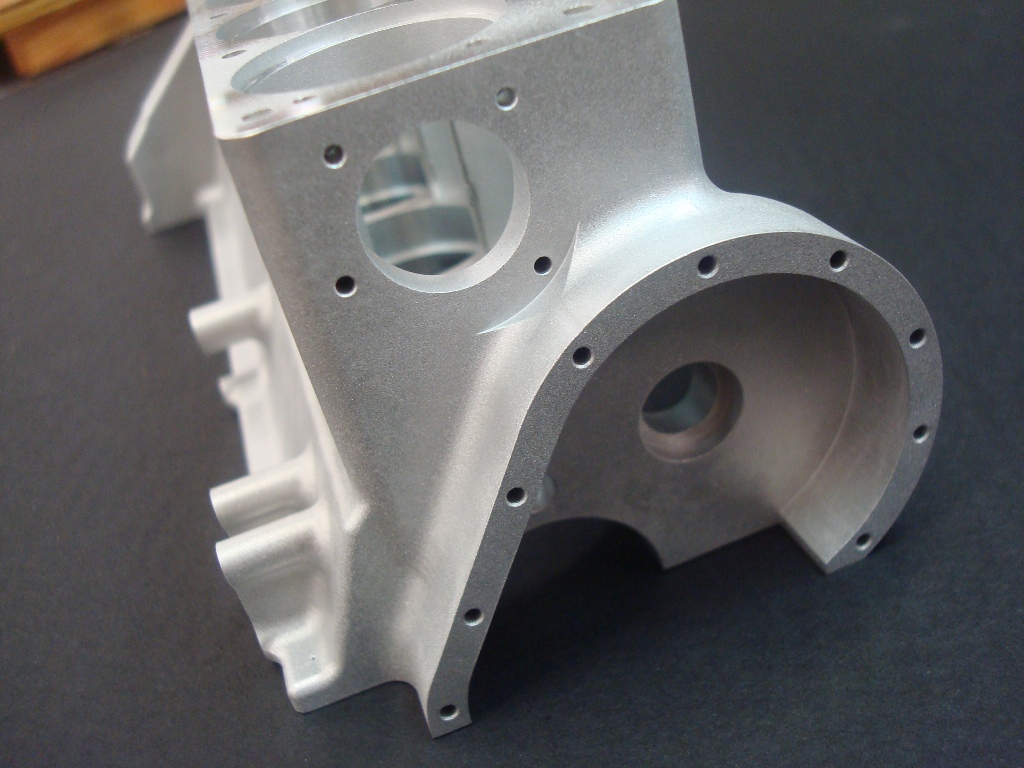 That is an amazing piece of work, Terry.

Please remind me which CAM software package you use.

kuhncw said:
That is an amazing piece of work, Terry.

Please remind me which CAM software package you use.

Chuck,
I use Sprutcam, a Russian product marketed by Tormach. My version SC-7 is a dozen years old, but it has some continuous 4-axis capabilities that I've used to machine camshafts and crankshafts. When I purchased mine it was a tenth the cost of packages with similar capabilities. Unfortunately the user manual left a lot to be desired, and since I learned CAM using this software my learning curve was steep. I don't know how more modern packages compare, but so long as I can keep an XT computer running I plan to stick with this one. - Terry
K

Beautiful work. I especially liked the wood hold-downs, I learned something.

Terry. Just out of curiosity how long did it take to machine the side of the block and how many lines of code did it take?

58tux said:
Terry. Just out of curiosity how long did it take to machine the side of the block and how many lines of code did it take?

Rich,
The most complex side, the port side, was done in seven individual steps using seven different g-code programs totaling 165k lines in just under 9 hours. On complex parts I usually break up the CAM into separate steps so I can run them over a number of days to limit the heat rise in the shop from the mill especially this time of year here in Texas. There is also a problem with the limited resources in my computer. Memory leaks are an issue with this CAM software, and I found that I had to quit and restart the application after each compile of the complex finishing programs to keep the application from hanging. - Terry

Awesome as always Terry. How do you keep from getting oily finger prints on your beautiful bead blasted surfaces?

You seem happy with your Russian, Sprutcam Ver 7 software. We know there are newer versions available, but if SC-7 does everything you want it to do and can do it on an old 32 bit PC, so why change? I am looking for a better 2D CAM software program than the ones I currently use. Will SC-7 accept 2D drawings and do acceptable 2D CAM, or must it have 3D models.

Mike,
The Sprutcam software will handle 2D with special 2D modes which are much simpler than the 3D operations that I use. I've never used them because of the way I learned to use the tool. In my mind it was just easier to stick with 3D for everything which isn't necessarily the best way to use the software. For instance, to round off an edge, I'll use a ball endmill and multiple passes in a 3D operation to get a similar result to what a 2D user would achieve with a single pass and a corner-rounding endmill.
I never continued upgrading the software for a couple reasons. First, the 5-D operations they began adding were beyond the capability of my Tormach, and so my benefit to cost was minimal. The biggest problem, though, were with imperial units. Most of Sprutcam's users use metric units, and every new release seemed to have some problem with imperial units that took even more releases to fix. My understanding is that the company is in a warehouse park and is surrounded by customers who give rapid feedback about bugs. The company seems to be very responsive to them, but less so with the few of us over here that had inch problems. I remember one release in particular that was so bad that it essentially shut me down. I complained loudly about it directly to them and through Tormach and they made a quick release to solve the problem. But, being millimeter people and I guess not knowing better at the time, they did it by adding a choice to use fractional inches! - Terry

Terry,
Thanks for the thorough explanation. I had an idea of downloading an older SC-7 version for the same reason as you. My requirements are 2D CAM, 32 bit machine and imperial units. So SC-7 appears to tick most of those boxes. What 2D drawing formats will it accept .DWG, .DXF ?.
Fractional inches, your joking ????? When was the last time enyone used 49/64"
Mike
Sorry for the sidetrack

Vixen said:
Terry,
Thanks for the thorough explanation. I had an idea of downloading an older SC-7 version for the same reason as you. My requirements are 2D CAM, 32 bit machine and imperial units. So SC-7 appears to tick most of those boxes. What 2D drawing formats will it accept .DWG, .DXF ?.
Fractional inches, your joking ????? When was the last time enyone used 49/64"
Mike
Sorry for the sidetrack
Click to expand...

I'll use a ball endmill and multiple passes in a 3D operation to get a similar result to what a 2D user would achieve with a single pass and a corner-rounding endmill.
Click to expand...

Likely for the better as corner rounding mills don't give a 90 degree radius.

As for the metric/inch issues, you could certainly generate the CAD model in metric. Then a newer version of Sprutcam and a faster computer could be used. The mill won't care.

For the record I am running SprutCam7 on a 64 bit windows 10 machine. It seems to work just fine.

I always appreciate your beautiful work and and your explanations of problems and solutions.
I have just 1 question, You use a lot of ball end mills. Do you have a favorite suppler / brand?
Thank you.
You must log in or register to reply here.
Share:
Facebook Twitter Reddit Pinterest Tumblr WhatsApp Email Link