I am working on a hit and miss engine from an existing design. Plans call for the exhaust valve to begin opening at 25° BBDC and close at TDC. I cannot seem to attain both of these so should I compromise the BBDC or the TDC? In other words should I make the begin to open at BDC so that it closes at TDC or should I keep the BBDC and close BTDC?

I have the engine sort of running but not well enough to actually keep running for more than a couple of cycles. I am still trying to eliminate binding and hard turning spots so that is also part of the problem. I would think that after all this time I would have this figured out but in the past I end up playing around with stuff until it runs and just leave well enough alone.

Just try it and see what it likes the best. I assume there is valve lash adjustment.
There are too many variables, to say one way or another is the best.

Set it up so that the valve closes at or just before top dead center. This may make it begin to open earlier than 25 degrees before bottom dead center, but it will probably be okay.

I'd say you want want to keep the closing close to TDC as well. When the valve closes you will be at almost the slowest the engine will go (right before a 'hit') so you don't want to be unnecessarily compressing fresh air and robbing power right when you need it most. This little bit of compression would also rob you of some intake stroke as well, as the compressed air expands it won't be creating a vacuum to actuate the atmospheric intake valve.
S

Agree with the "make the begin to open at BDC so that it closes at or just before TDC..." statement. It's the right thing for best purging and slow speed. It also maximises the thermal expansion phase = Thermodynamic efficiency... - if it means the opening of the valve is later than the designed 25deg BBDC.

Thanks. I was pretty sure that closing at TDC was more important than opening BBDC. As noted closing BTDC will waste momentum by trying to compress gas which would actually shorten the intake stroke by needing to neutralizing this compressed gas prior to intake. I presently have it set so that it opens at BDC and closes at TDC. I was trying to determine what was best because it is quite complicated to adjust the stroke. It involves removing some governor parts and sliding the flywheel on the shaft.
S

Really, a bit of tuning will probaby give best performance as designed.... that's what designers do for us. So although you may get it running as it is, I suggest you make the effort to finish it with the correct settings. You will be happier when it is the best you can do.
Pride in a really good job is much better than feeling "It's ok, but...."
Modelling is about demonstrating the full-sized or historical idea as well as you are able. Engineering (professionally) is about resolving problems to the best practical solution. Strictly defined: Engineering is the application of ingenuity to resolving problems of the real world. (It is a Greek concept). Often misunderstood as "messing about with engines....". Do your best and enjoy the result. - Be proud of your achievements.

Here's a visual to better show degrees of movement. Draw a circle. Draw a horizontal and vertical line through the center of the circle. Draw a line 45 degrees from the horizontal line (halfway between what would be the 10:00 and 11:00 o'clock position. Now measure the vertical distance between the horizontal line and the point where the 45 degree line intersects the circle. Now measure the vertical distance between the point where the 45 degree line intersects the circle and the point where the vertical line intersects the circle.
The amount of vertical motion (piston) from 45 degrees to vertical is minimal. Generally I try to close the exhaust valve a few degrees before TDC but even 10-15 degrees won't compress very much volume. Engine valve timing is based on the air flow and intended performance rpm of a particular engine. A hit and miss engine is at the bottom of the performance scale when running so valve timing numbers aren't critical.
I have never calculated when and atmospheric intake valve starts to open but I would have to guess even with good piston seal the crank would have to move at least 10-20 degrees mainly because there is very little vertical movement.
gbritnell
T

This is as much a question for the experts as an observation: SDHP engines (super-duper high performance) open the valves way earlier than nominal, and close later, because it takes the air a while to catch up with what the valve is doing. Gordon's talking about an exhaust time of 115 degrees, which is starting to sound more SDHP to me than the "thumping away in a corner forever" sort of performance one wants from a old-time stationary engine.

So a typical hit & miss engine is going way slow -- wouldn't the ideal open & close times be close to the 1st-order theory where you ignore that air has density, i.e. start opening right at BDC and finish closing right at TDC?

I recently did some work on a full size 10 HP hit and miss from (I think) 1904. This one has a cam operated intake valve as well, but that shouldn't make any difference to the exhaust. It opens the exhaust extremely close to BDC and closes extremely close to TDC. As George rightly says though, there's not a lot of piston movement around the dead centres so it's not critical on a slow revving engine that's not moving a lot of air. This big one might have benefited with a bit more 'aggressive' timing though - large displacement through relatively small passages should mean relatively high air velocities even at slow RPM.

The point in my original post was that as designed it was not possible to get 115° valve movement so I was merely asking whether I should be aiming for the 25° BBDC or the 0° TDC. I am getting abut 80° total valve action which I have also verified via cad layout so I can get one or the other but not both. With the discussion which followed I have concluded that the TDC was more important than the BBDC. I currently have it set at about 5° ABDC and 5° BTDC which seems to be working well. It is not worth the time to disassemble the engine to find out if something like 0° BDC and 10° BTDC would work better. I suspect that I would not see any difference. As noted it may make a difference in some high performance engine but in a slow H&M engine it is probably not too important. Interesting discussion in any case.

I time my exhaust valve to seat just as the piston starts back down. Hopefully, utilizing the slight inertia of the exhaust gasses to create a possible vacuum on the intake. I put negative ramp to make valve drop to the seat. Exhaust opens around 20-30 BBDC(depends upon rocker/valve lash, of course). Seems to run ok. 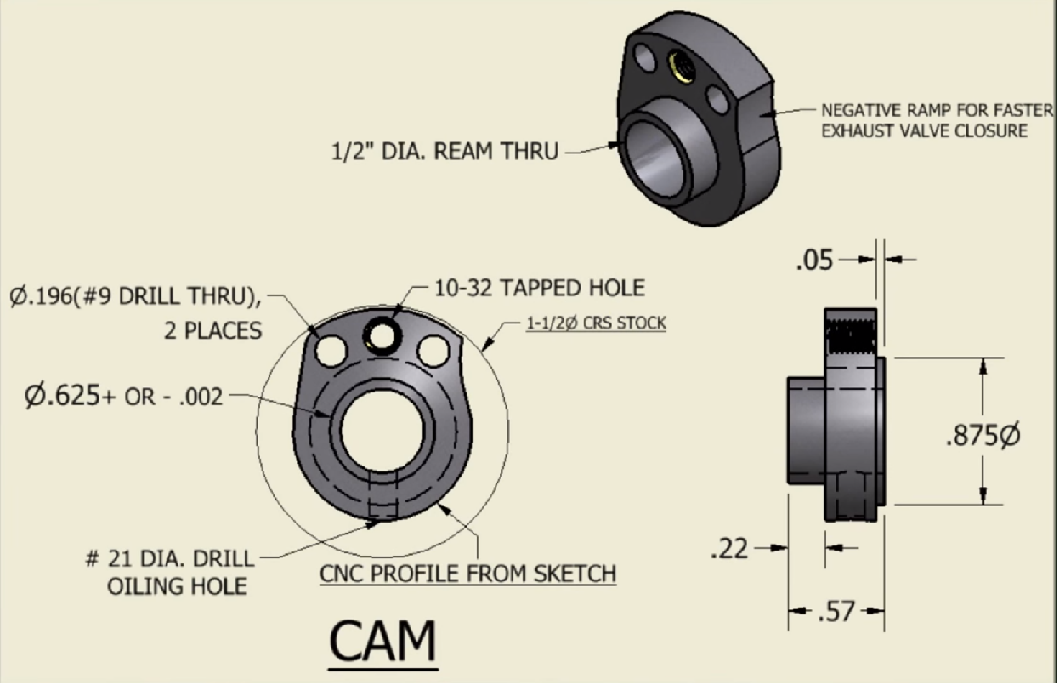