Lets talk about engine speed governors. I am well acquainted with flyball governors and flywheel mounted governors to control the lockout rod on hit and miss engines. I have built many of them with varying degrees of success. Having just completed my sideshaft horizontal engine, I am interested in putting a governor on it, similar to the governor envisioned by Edgar Westbury who originally designed a governor as an "add on" to the Centaur engine. This governor fits onto an extension of the sideshaft and movement of the governor weights control how much the carburetor throttle-plate is opened or closed, by a linkage between the governor and the throttle on the carburetor. It is a centrifugal governor, controlled by the speed of the engine. Let us assume that I want the engine to run at an idle speed when under no load, but as the load increases, the engine will open it's throttle proportionally to compensate for any load which makes the engine want to stall. In order to do this, the governor weights would have to be at the full extent of their travel, outwards away from the center shaft when the engine is running at idle speed. As load from a driven device caused the engine to slow down, the weights would begin to move closer to the shaft because of spring tension and a lessening of centrifugal force. This in turn would move the lever, causing the throttle to open more and increase the engine speed to offset the slowing caused by the load.----SO--My question is, where would those governor weights lie in relation to the central shaft when the engine was shut off. Would they lie close to the central shaft causing the carburetor throttle to be "wide open", but with very weak springs so that they fly out quickly to their full extent and close the throttle plate to "idle" condition as soon as the engine goes from zero rpm to idling speed? I can't really see it working any other way. Does this mean that when I start the engine I am always going to be starting it with the throttle plate in the "wide open" position, and as soon as it starts the governor closes the throttle to "idle" speed? 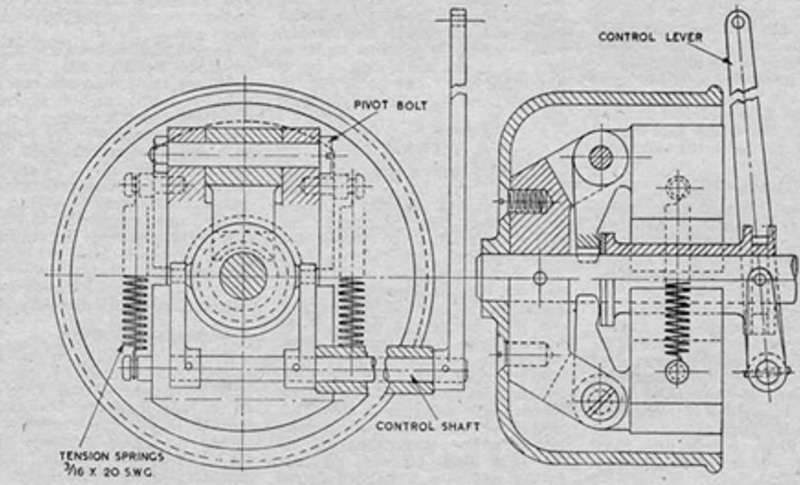 This could be tough to put into words but I'm thinking about a (sort-of) two-part throttle. So you have a manual throttle which you move, which sets the maximum available throttle position. Then you have a 'traditional' governor which closes the throttle as weights are thrown out at high speed. I have seen a similar thing on old lawn mowers where the throttle is opened manually via a cable (terminated with a spring that can be over-ridden) but there is a 'sail' on the throttle which is affected by the airflow from a fan on the flywheel. As RPM increases beyond maximum, the airflow to the sail overcomes the spring force and the throttle closes, but when RPM drops the spring opens the throttle again. In this way you can start the engine at low throttle position, then open the throttle to whatever position and the engine won't rev past what you've set the governor to. Basically, you'd have two springs competing with each other attached to the manual throttle and the governor.

You could set it such that the engine is always idling but obviously you wouldn't get maximum power out at idle and I'd guess that enough of a load to be full throttle at less than idling speed would probably stall the engine before it could respond.
G

On full size engines I am familiar with, the default position of the governor when stopped is full throttle as you surmise, Brian. I don't suppose you really mean "idle" speed just a suitable low speed for normal unloaded running.
Ian.

I modelled the governor based on Edgar Westbury's drawing, and it doesn't look that bad. 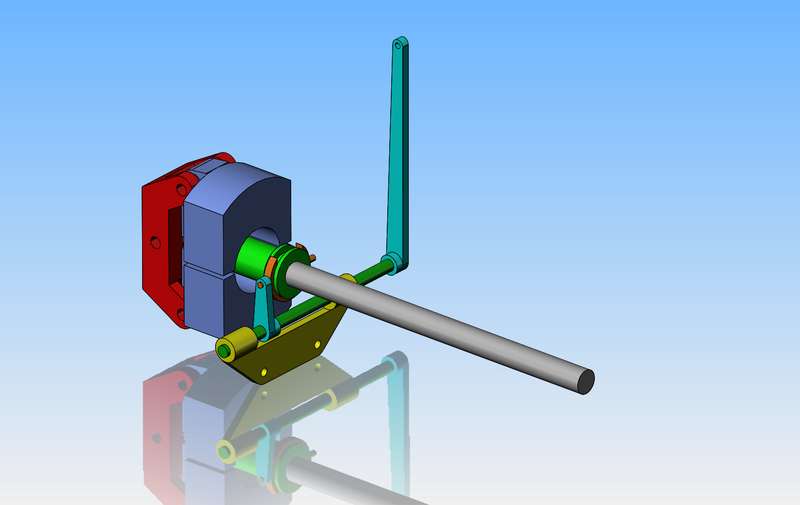 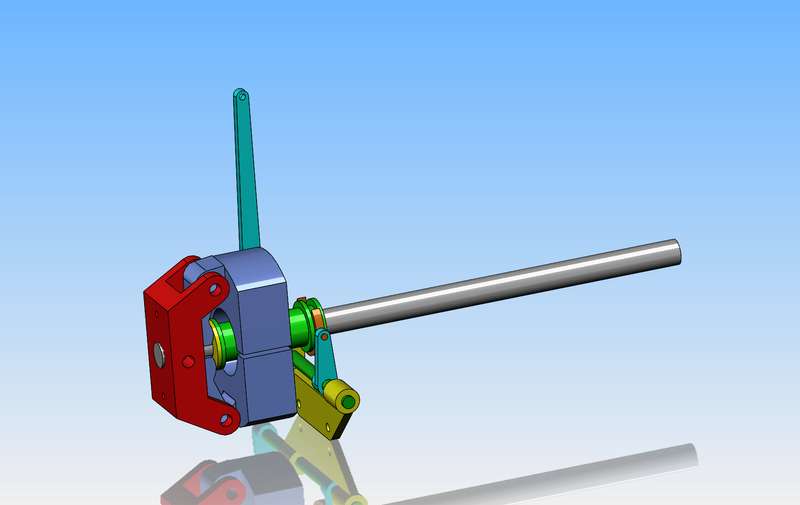 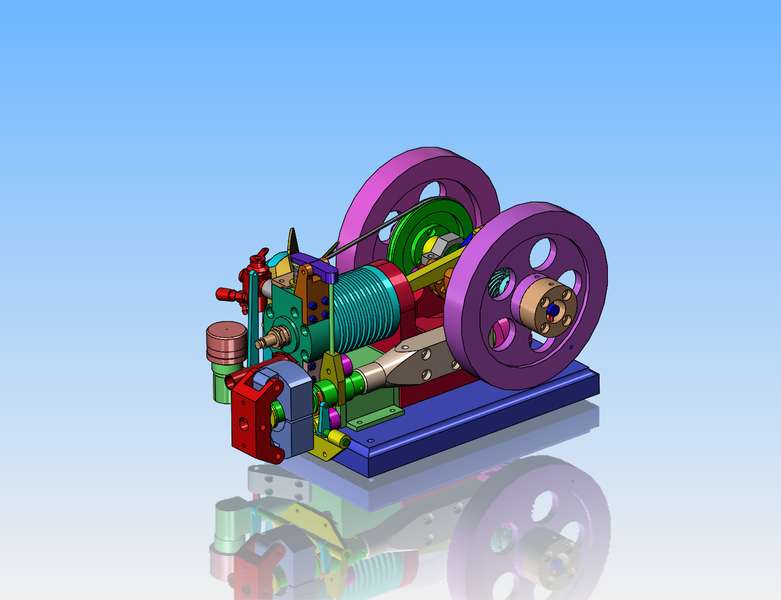 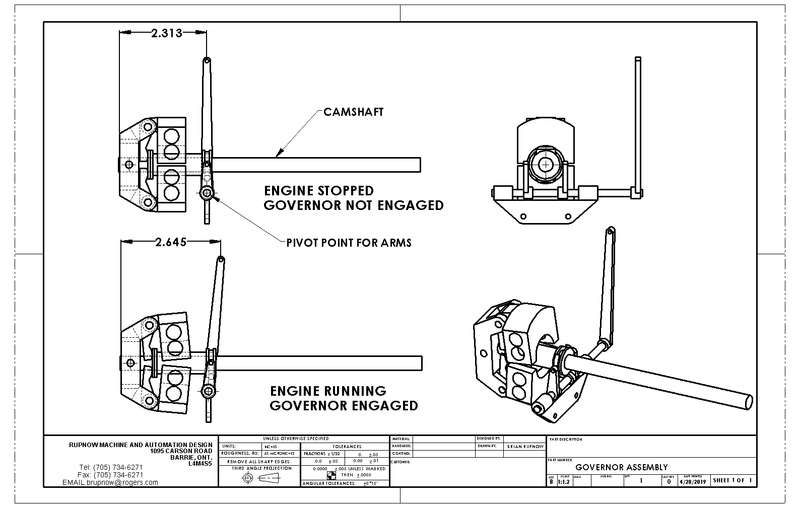 Hi Brian ,
Nice idea, but before you spend a lot of time on this. Read more about unloaded RPM and loaded RPM on a Briggs Stratton engine
the RPM IS THE SAME but when the engine is slowing down the governor spring will kick in to keep the same "unloaded RPM to a FULL loaded RPM. This will never affect your idle RPM. The best way for you to prove this, set your unload rpm to 2500 then load your motor so your governor can kick in and keep the same RPM

My original idea was to build this governor and add it to the sideshaft horizontal engine. The sideshaft engine runs so well as it currently sets that I have decide not to change anything on it. I may however build the governor as a "stand alone" unit and drive it with a coupling on the end of the horizontal sideshaft camshaft.

Just as I thought, this governor lends itself very well to being a stand alone unit. This is something that could be attached to the end of my engine baseplate and coupled to the end of my camshaft. Having it's own ball bearing in the support brackets would take all the loading away from my engine cam bushings. 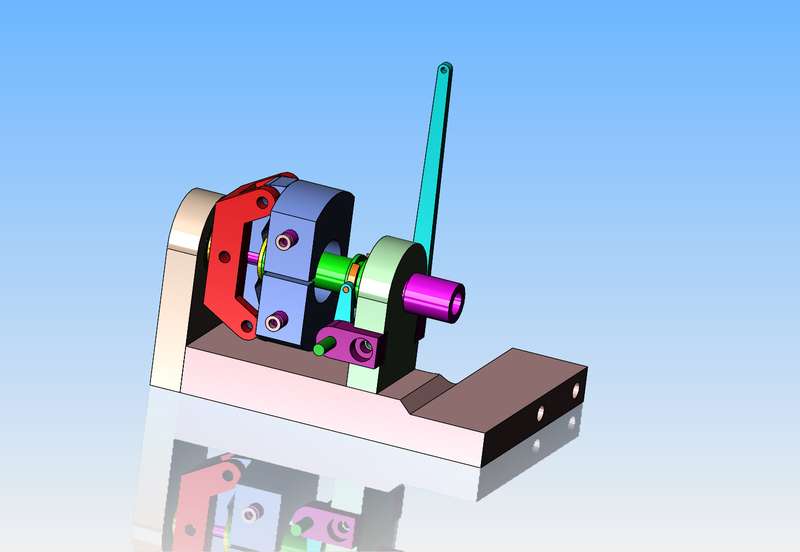 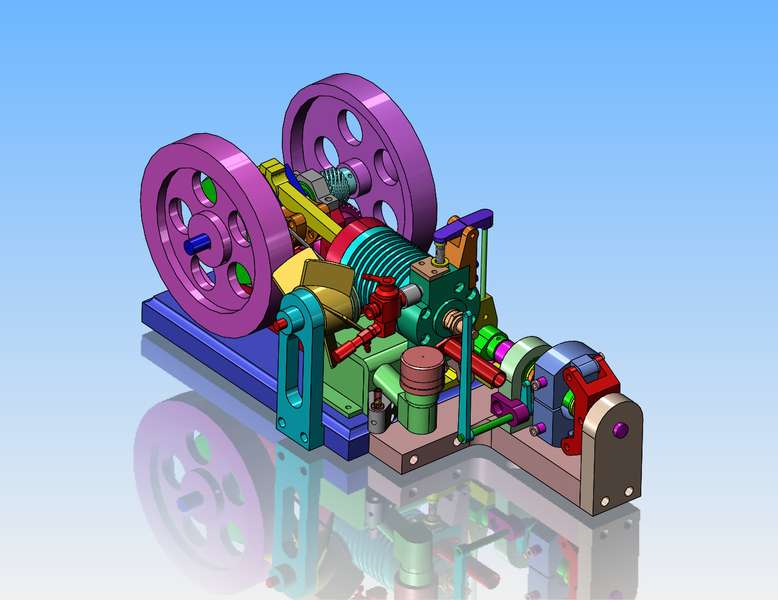 Knowing my limitations as a machinist, I decided to make the flyweights from two pieces. 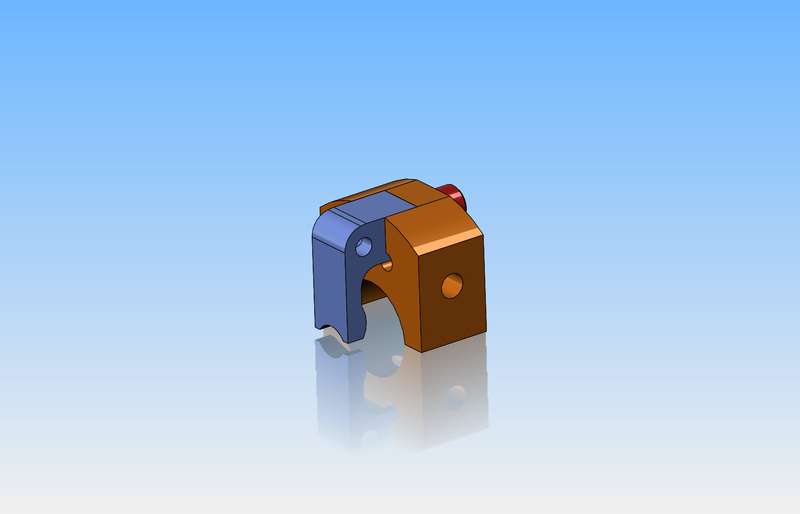 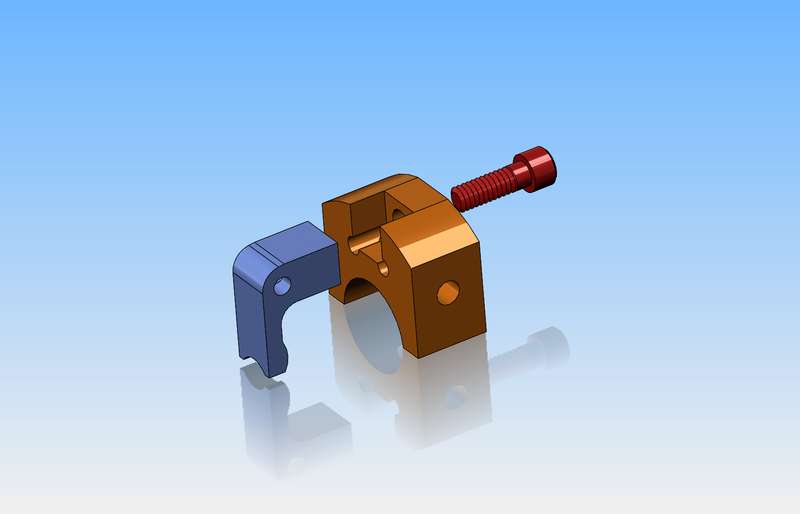 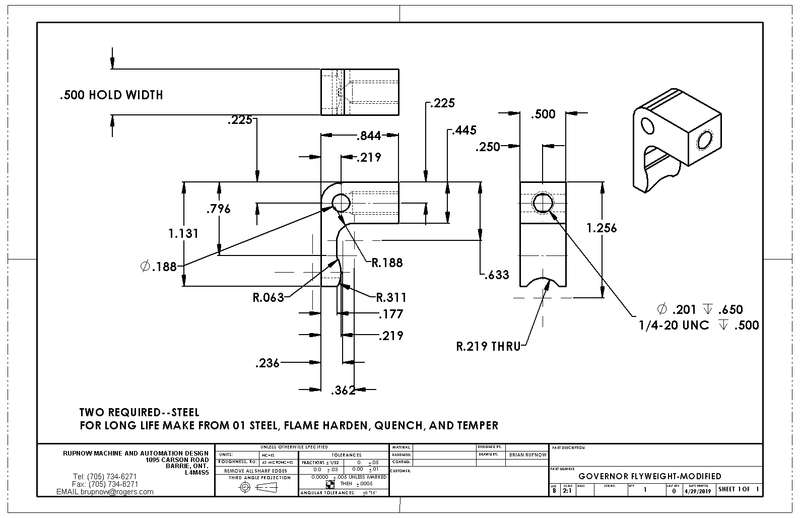 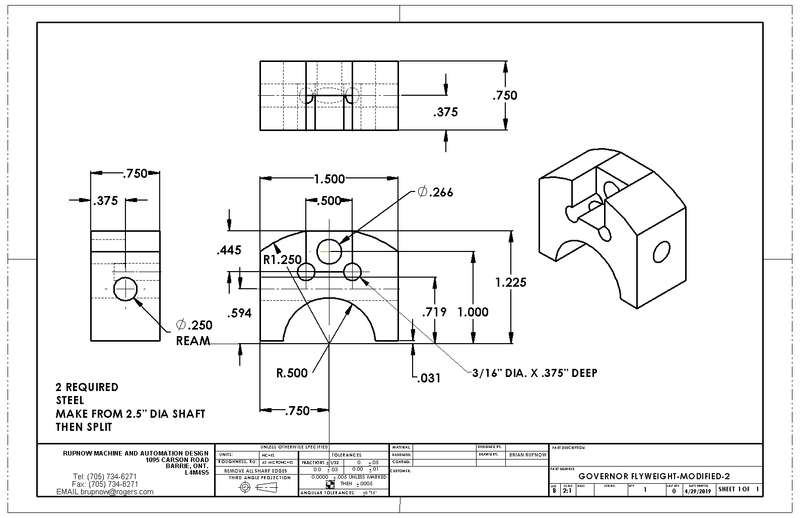 A very pucker-worthy job so far. I started out earlier today with a crusty old chunk of 3" diameter shaft. So far--So good. 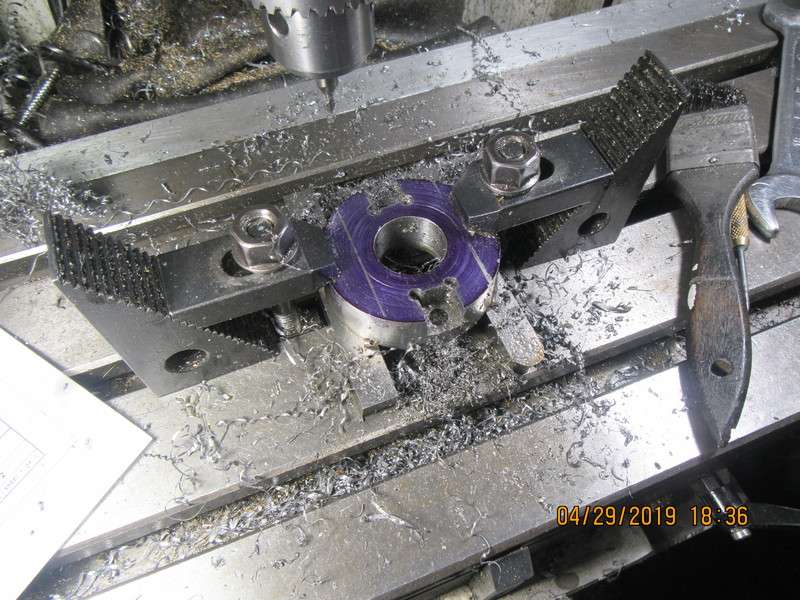 Somebody said they were confused because they didn't see any springs on the flyweights. Here they are. I just want you to know that springs are one of those things that I find absolute S.O.B. to model. I can do it, but it takes me a long time, and since I only do it about every three years, I never remember quite how to do it. 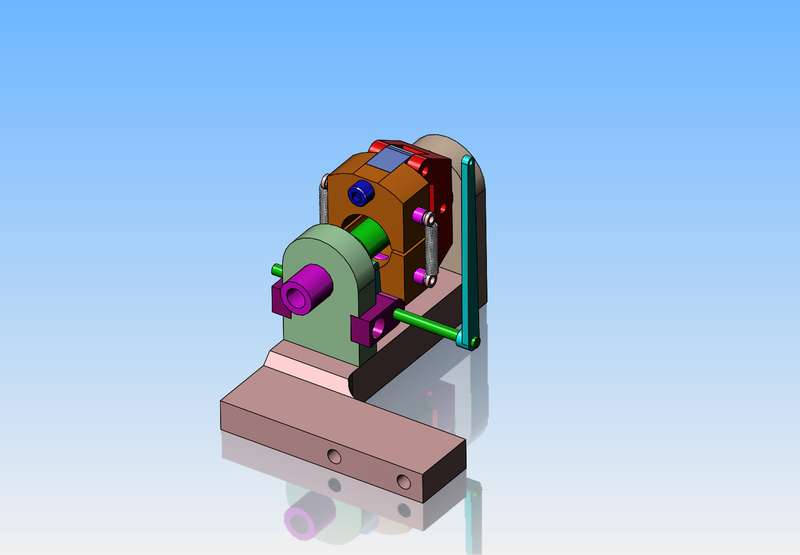 We got PARTS!!! These two flyweights came out very nice. Not really the weight of a fly though. More like maybe a full size rat. I have to go rake leaves for a while now before wife shoots me. Might get a start on the parts which bolt to these later today. There is a heavy rain warning for Barrie and surrounding area for tomorrow, so tomorrow will definitely be a work in the shop day. 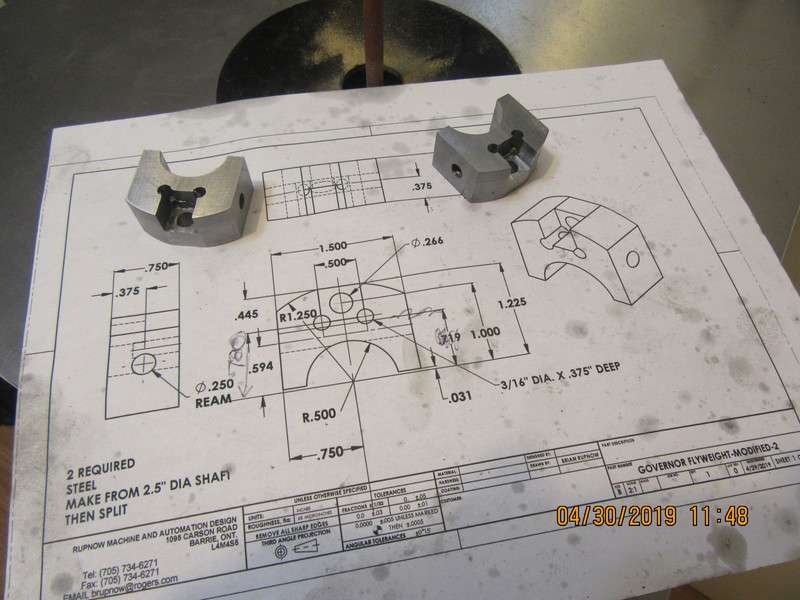 Jeez, what an old pussy I am!!! Raked leaves for half an hour and I have a blister the size of a dime at the base of my thumb. Rake hanFirst layer of skin is gone. Second layer is red as an apple. Work related injury. Guess what my son. I have your weekend all planed out for you!!!

Brian
They make gloves for us wossies.
Cheers
Nelson

Today I made the second part of the flyweights. They don't look like a lot, but it's taken a good share of my day. 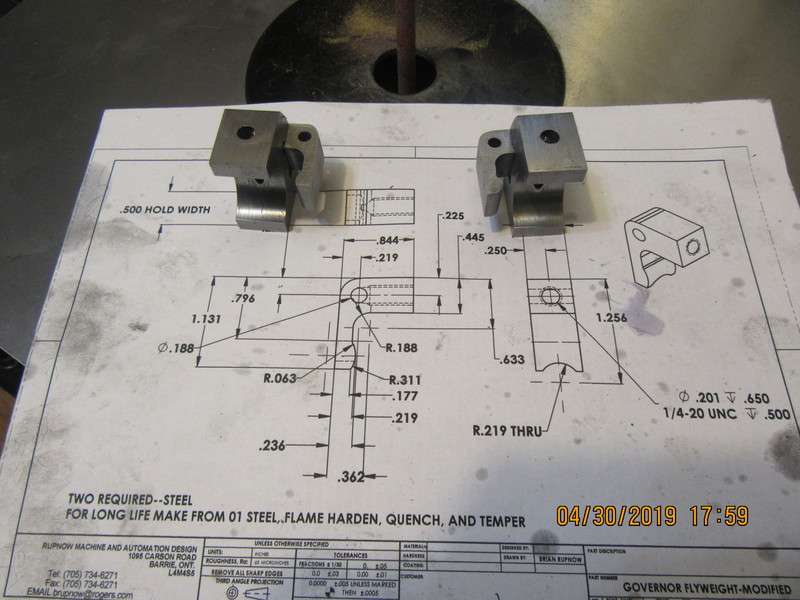 so the 2 springs on the weights, different spring tensions is how you would adjust the governor to be appropriate to the size of the engine / desired rpm? sort of like the advance weights in a chevy hei distributor?

Yes Werowance--more or less. there is one more spring that I haven't as yet shown, which helps or works against these two springs and is adjustable so that you can "tune" the rpm at which the weights move. This gives you control over the engine speed set points.
You must log in or register to reply here.
Share:
Facebook Twitter Reddit Pinterest Tumblr WhatsApp Email Link