I'm wondering if any members here have one of these engines. Quite an interesting piece of steam history. Birmingham Dribbler - Wikipedia

I'm trying to help a fellow member here on this forum with this, along with some other projects from other members..

I'm trying to recreate drawings of a reasonable "likeness". I have some "rough" overall dimensions & some varying dimensions of gauge (2-7/8"?) but am hoping to find some more details of this engine.
To recreate a "working" model, I would like to know the bore & stroke, boiler dia. & length...
The cylinder is not on the centerline with the driving wheels, & I'm not sure how the intake port of the cylinder needs to be positioned.
I'm not real fond of the burner just "clipping" into the lower frame from the bottom...(It runs on solid fuel tablets, &/or an alcohol burner).

I've attached some rough drawings of where I'm at with it now...

I would appreciate any info or insight into this engine, all constructive criticisms welcome.

The final drawings will be posted here for free. I haven't seen anything close to drawings for this engine yet.

Hi John, some info in the links. I think LBSC did some drawings for one around 1935? you might find some info on the John-Tom site
Locomotive of the Month
Maxwell Hemmens Birmingham Dribbler
F

Found this on the net
LBSC Ajax

Thank you Frasier! That is exactly what I was looking for!

You might want to look at "Dickins," too. The little O gauge loco was designed by Dr. James R. Senft, and was serialized in Live Steam magazine in February-April 1976. 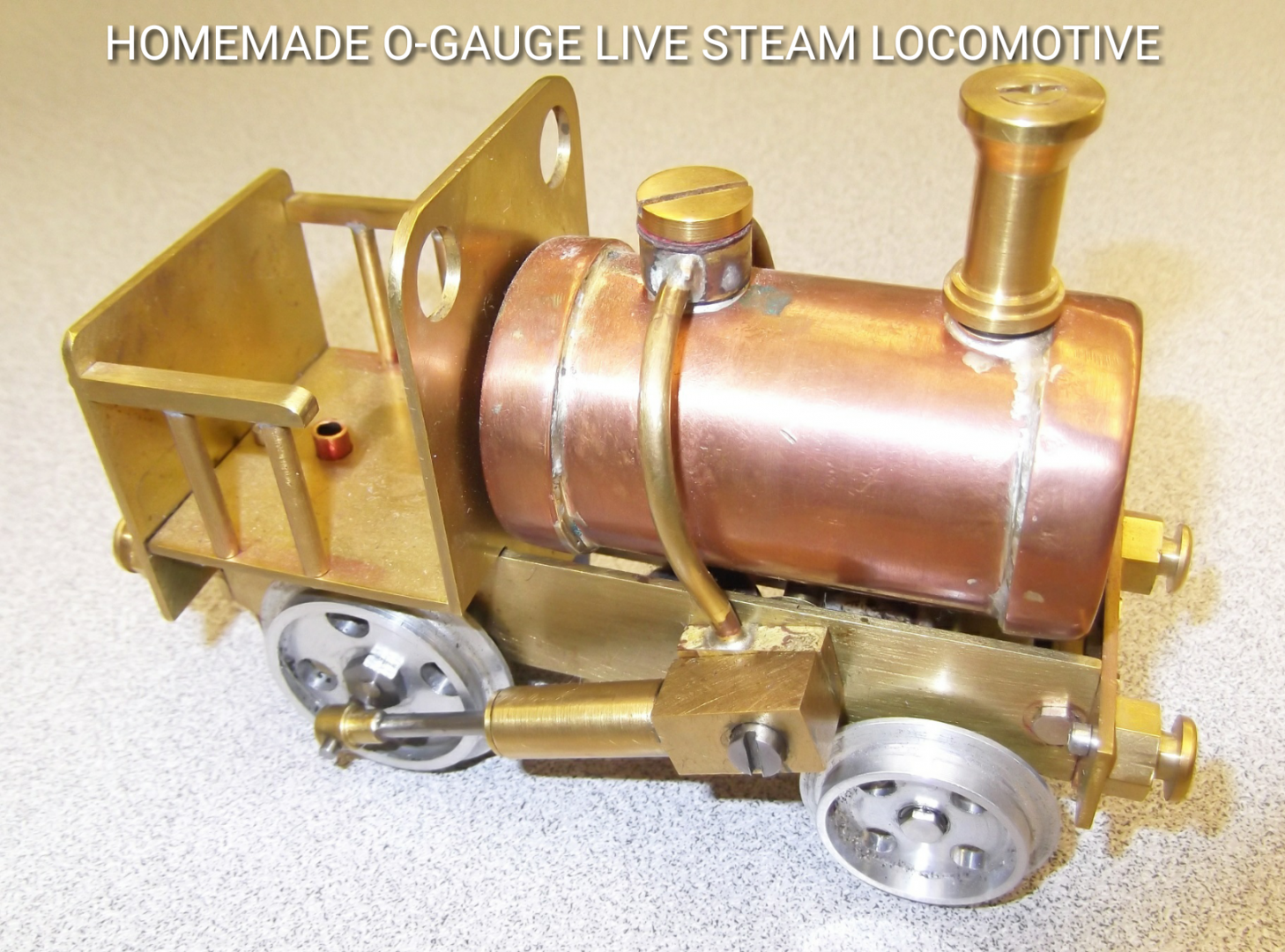 JOHN Hi my project is slowly comming alog Hope to send some pics next week, I still need some detailed drawngs of the , two valves , inlet and exhaust and tap . thanks for all the help
MIKE
S 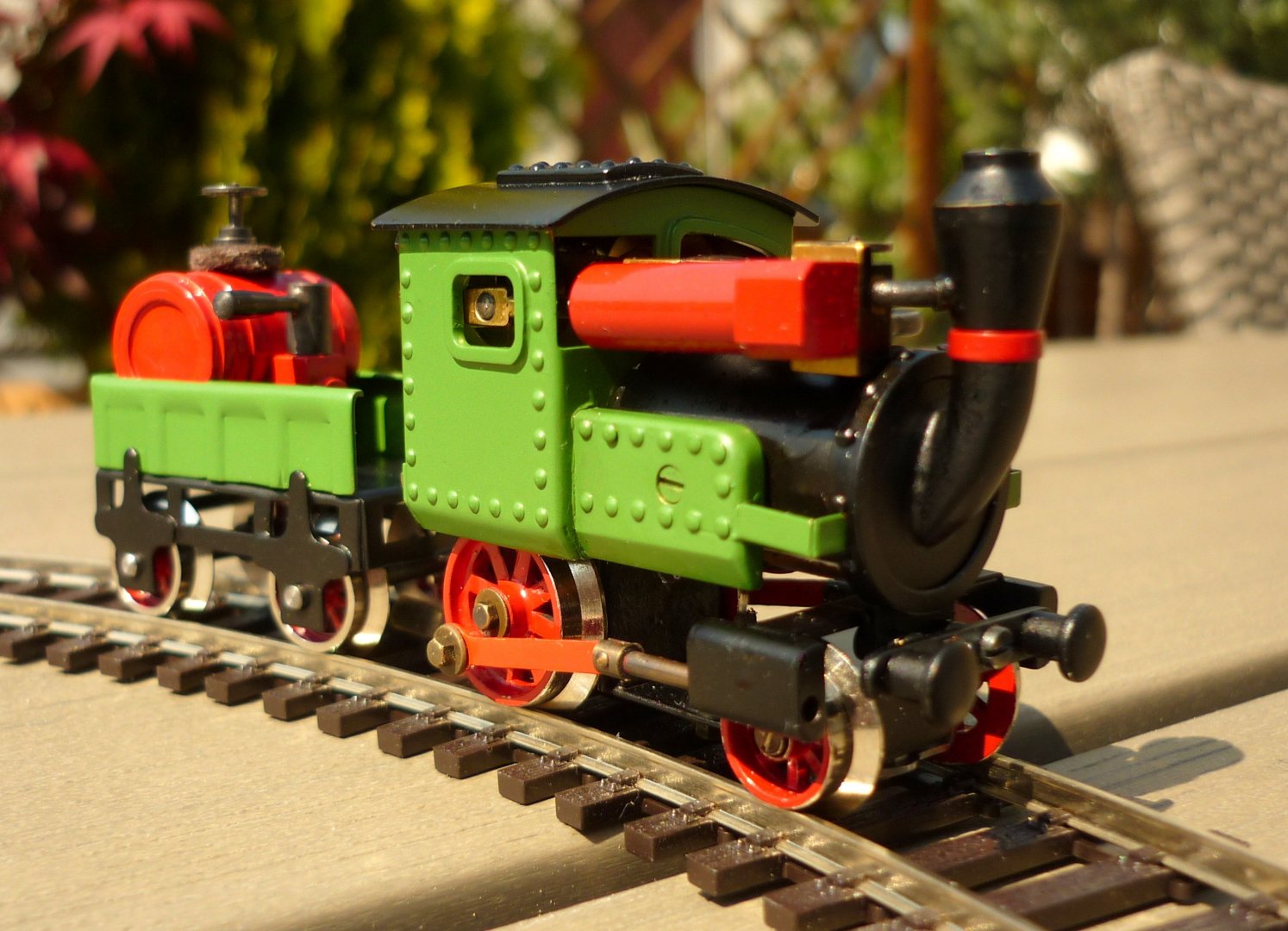 For those who may be interested, here's the little Dickins being tested while under construction:

That is cute as the "Dickens"...thanks for posting that!

I was away screwing off all weekend Mike, needed a little downtime & had to "Un-plug", will be back at it shortly, I'm looking forward to seeing the pic's about where you're at with your project., can you post a build log?

Thanks for all the great info & to everyone for helping me out!

Progress, even if slow, progress...
Still working on it, had some problems with getting the proportions right. This being a "Toy" wasn't really built to any particular scale. The "Frame" was a cast base, so I spent a lot of time trying to re-create something that resembled that. I ran into some problems getting the rear section of the frame sorted out, & I'm still not real happy with it.
I'm trying to use some "Available" parts such as the boiler bushings, bearings, & anything that would make this an "Easy" build. I don't like the steam whistle shown, (It's a PMR one), it's out of scale, I don't know if it can be shortened. I "winged" the safety valve, kind of copying other designs, mostly from the "Toy's", Mamod. .
I'm not real crazy about the burner set-up, don't even know how that sits in the frame. It seems it just went "Up" from below, I've seen a couple modifications that used alcohol type burners that may be better...I dunno.
& I'm not sure how the boiler is fastened to the frame, lugs on the bottom?

I'm not sure about the valves & fitting's, again, I would like to use off the shelf parts, but not sure whats available, especially "across the pond".

Any help greatly appreciated, this might not even be a desirable project to build.

(Tried uploading some image files, but I guess the forum doesn't like "tif" image files. ) I guess I'll try putting them up later.

John,
I happen to have a Maxwell Hemmens built Birmingham Dribbler. Had it for over 35 years. There are lots of photos of Hemmens Dribblers on Youtube under Maxwell Hemmens Birmingham Dribbler. I have never fired mine and it looks exactly like the two illustrations in your post #13 above. The boiler is attached at the rear to the open frame using a flat head machine screw through a frame crossmember and into a female threaded bushing inside the boiler. At the front, a threaded rod extends down through the front crossmember and front axle bracket. The threaded rod is fastened at the boiler with a nut and at the bottom it extends through the front crossmember and axle braket. A bottom nut is tightened just enough to hold the axle position when moving. The burner is clamped between the frame side members and uses a fixed alcohol burner attached to the burner clamp with punch indents.
Jeff
O

johnmcc69 said:
I dunno.
& I'm not sure how the boiler is fastened to the frame, lugs on the bottom?

My Dickins' boiler is fastened to the spectacle plate with a threaded stud screwed into a bushing in the boiler, passed through the plate, and secured with a nut.
J

Thank you gents! All very good info!
I decided that I would solder 2 "Lugs", front & back of the boiler that also help "Cradle" the boiler having 4 points of contact (center of cradle being relieved) & fastened with 2 cap screws each from the lower frame, Kind of like a "Vee" block, but radiused to match the boiler profile. Of course the builder can decide how they might like to build it.

Still not real sure how I'll have the burner clip into the side rails as Rustkolector mentions, maybe some tabs...

Not much more to do before I start working on the final drawings.

John, I am in hopes you will share the drawings with us, these old(er) style engine designs are fascinating and drag up memories of childhood fun in us.