Put on the bracket for the reverse gear lock. Also did some tweaking, found a couple friction points, and realized that I had left the upper bolt holes for the exhaust manifold open (have not made the manifold yet), so it was leaking air there. Whoops!

Runs much better now, down to a much slower speed, and sounds better.
Time to take it apart, polish it up, paint the aluminum plates, put the packing in the lower glands (left that out first time), and get it ready for final assembly.

You did a fine job on the reversing gear.

I can appreciate what you did here.

Great job, Great looking engine. I like the rods, and valve rods coming out the top. Thank you for the great pictures. larry

Got the plates painted, turned some decorations into the columns, and swapped most of the bolts for hex heads - looking pretty good, running nice now, even down to some slow speeds/pressures.... 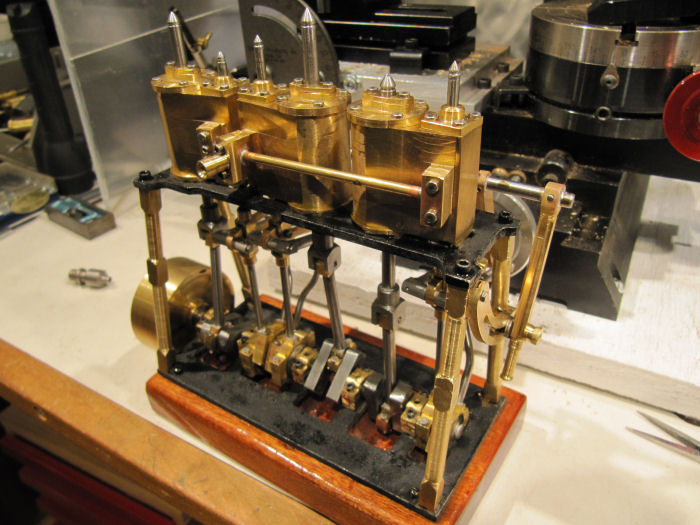 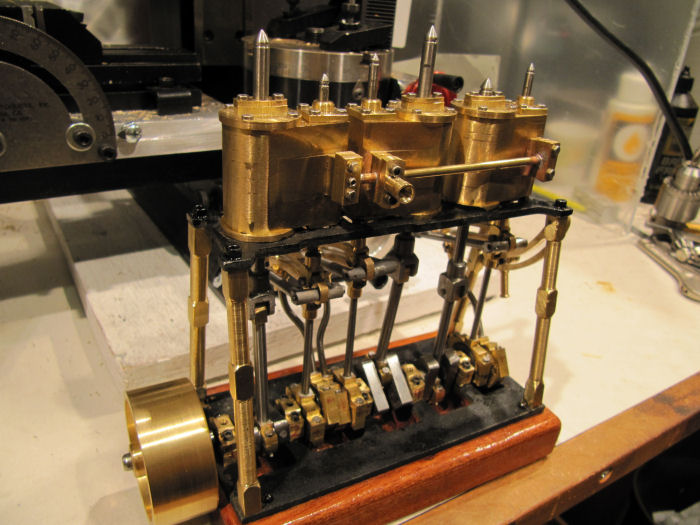 Bravo Crueby! It's a fine looking engine you can be proud of. Do you have the wherewithall to try it with steam?

romartin said:
Bravo Crueby! It's a fine looking engine you can be proud of. Do you have the wherewithall to try it with steam?
Click to expand...

I have a boiler hooked to another engine, need to make the right fittings to match up the two. It is running very well on air so far, cant wait to try it on the 'thick' stuff!
M

im pretty new to air engines, so it took me a few minutes to figure out why you had the two eccentrics acting on the single arm.

is there another build/ resource somewhere that goes through a little more of how the timing and such is set for the double acting setup?

For the reversing gear, if you search these forums and Google for "Stephenson Link Reversing Gear" you will find lots of diagrams and descriptions. Essentially, there are two eccentrics, approximately 180 degrees offset from each other (usually slightly different than that to optimize). If the arms are thrown to one end of the arced slider, than the eccentric at that end acts on the valve. If thrown to the other end, the other eccentric acts on the valve, running things in the other direction. The linkage lets you pick which eccentric to use, which is much easier than changing the relationship of the eccentric to the crankshaft itself.