Do a parts of engine that takes longer than a day !

Hi All !
If you do parts of engine, it take more than 1 day, at the end of the day will you keep everything (milling bits, drill bits in collet chuck, workpiece in chucks ..) on the machine and the next day you will do continue?, or will you disassemble it and reinstall it the next day ?
Thanks

The last thing you want to do is remove a work in progress - unless you absolutely have to.
By all means tidy up and put dust covers back (if you use them).
Pick up from where you left off.
Alternatively if you need to break down for some other job - try to leave off at a point that is easy to recover from - or remove the vice / chuck etc. with the part in it.
Regards - Ken
L

The setup stays until the job is done, if at all possible. The tools and bits set out for the job stay on the bench till the job is done. One of the story's in the Machinist Bedside Reader tell of an old guy who would study the print and while studying would set out the proper cutters, drill bits, and other bits of kit to do the job. When he was done studying all the tools were set out and ready to go. I took that story to heart and try to do the same and the tools stay out till the job is done. Then they are cleaned and put away.

Ken I, larryg !
Thanks for your comments.
A

Never tear down a setup, unless someone in a higher pay grade demands access to the machine.

I can't remember ever having a setup that took more than one day to finish. But I agree with not breaking it down if a second session is needed for completion.

I have removed a part from time to time but usually I have been able to add a reference point to put the part back in the correct position One big thing is to preplan the entire operation so that you do not have to remove the part in order to do some operation which should have been done prior to the set up. I know this because of previous screw ups on other projects.

In my one man shop there is no one with a higher pay grade to force me to tear down a setup for their project.

My setups (fixtures, stops, dial settings etc.) stay in place until I need the machine for another job.
Building a multi cylinder engine means most setups are designed for several parts to be machined, so it is possible to remove / replace a part to continue machining.
Keeping the setup in place affords me the opportunity to make minor alterations if I missed anything.
S

On a mill with sufficient room my vise lives offset a bit to the right of center. This leaves a bit of room for a suddenly needed small job to the left. A complicated setup gets left in place until the job is done. If you think it's likely that you will have to tear down and re-establish, or if you will need the setup in the future, consider using a sub table that can be zeroed from the table edges rather than from the workpiece. Sometimes an hour making a fixture beats doing the same setup multiple times over the course of a year.

Lots of helpful comments.
Thanks All !
Perhaps the job is no more than a day, but I want to slow it down, because I don't want to make a small mistake that would destroy 3,4 or 5 hours of work.
Once again, Thank you very much !
L

Being a Hobby site this brings in some other factors. Most likely no one is going to demand you give up the machine for other jobs other than yourself. For me a day in the shop may be only a couple of hours, not 8-10 hours producing for he company. As a beginner one may not have confidence in a setup so will ponder the idea and may research the idea and consult with others.

I'm with all the others - keep the setup if at all possible. For me, that means leaving the DRO powered up on the mill until the part is done!

Awake, does your DRO 'forget' where it is when you switch it off?
My DRO consists of three separate scales each with its own readout. The cheap, eBay variety. They are battery powered, using a pair of batteries each in about a year. Even these economy gadgets remember where they are after I've switched them off.

Yes, I'm afraid so. This is a rather ancient Anilam MiniWizard DRO that came with the well used Bridgeport 2J that I bought a couple of years ago. It is about the simplest DRO imaginable; the only "smarts" it has is the ability to divide two measurements in half to get the center of a part. And yet, it is incredible how useful even a "dumb" DRO is, especially on a mill!

I have had thoughts about trying to design a microcontroller to read the scale signals and feed the results into a TouchDRO setup. It seems like it should be pretty doable with a very inexpensive ESP32 microcontroller. Not sure how well the wireless interface would work with the tablet acting as the DRO screen, but that would be true of any TouchDRO approach, and the little I've seen seems to suggest good results.

I came close to attempting this when the ancient membrane keyboard went out on the MiniWizard. But I wound up instead making a new keyboard, and a new display bezel along with it, using micro touch switches and my home-built 3d printer: 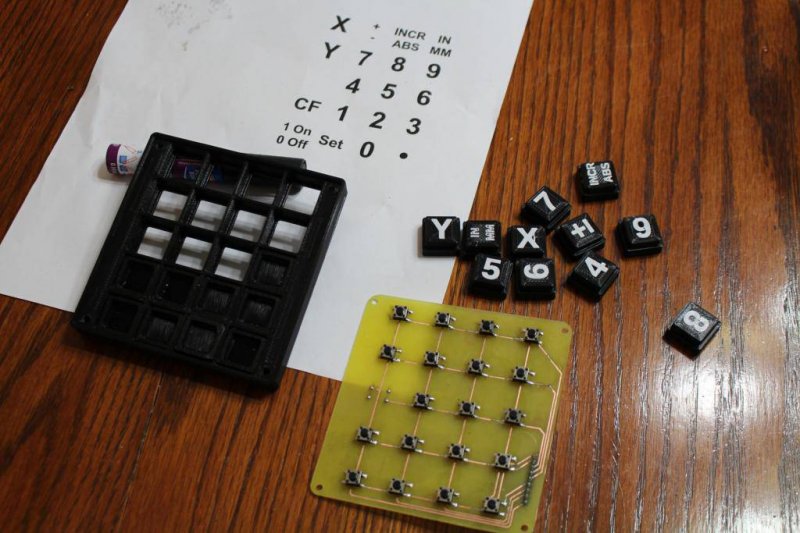 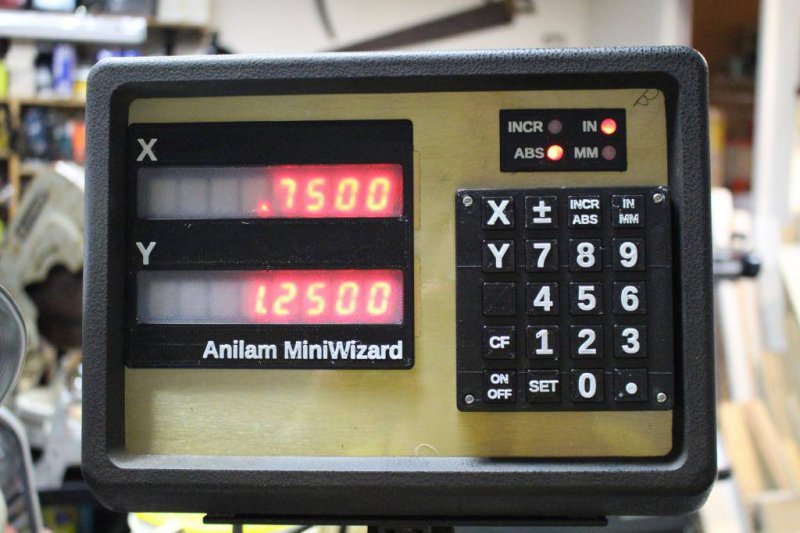 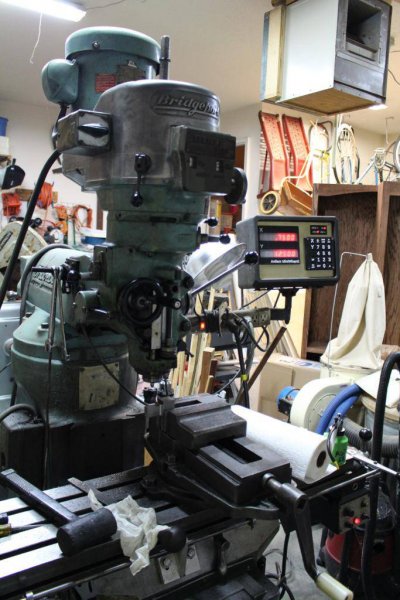 I have got the TouchDRO on my mini mill. The interface is via Bluetooth. It is much better than the other DROs. My accuracy has improved beyond what I expected.