the ever ongoing "lets build a cnc lathe...."

getting round to making the main spindle. was going to machine one with a (lets say) 127mm (5inch) step on the nose, then 3 or 4 bolts to hold the chuck on. since i came up with that many many moons ago, i have got my self a bigger lathe at that has a D1-4 cam lock on the front. the cam lock is sooooo much better than the step kind of spindle nose. so i have change my mind....... yet again with this build, to make a D1-4 spindle nose.

and this is where i got stuck. i cant seem to find a complete drawing of the nose. I have found some drawing with a few dim's on them. like angle of the tapper, OD of the spindle and the pitch of the 3 holes in the face. but nothing about the rest of it. Plus the ones i have found don't make much sense. on one of them the list the sizes for all types D3 D4 D5 etc on the D4 it lists an ID bigger then the OD?? I have also measured the one i have and it doesn't match the drawing I have found. one drawing i have found with all the dims on it is for the D1-3. maybe i could scale that up?

can anyone point me in the right direction. i have a big chunk of EN24T just dying to be cut up.
P

I've only seen these generic tables/sketches, but also haven't had a need to delve much further. Was there additional information you were requiring? (Note the nose angle is a pretty precise dimension).

Find a helpful reference chart of chuck mounting dimensions for lathe chucks types D, L and A. This lathe chuck size chart features many items we have for sale.
www.victornet.com 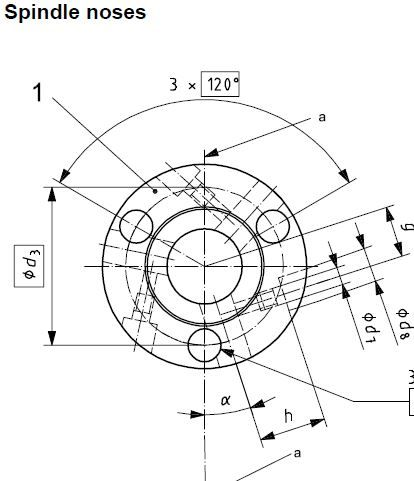 blighty said:
this is the sort of thing i'm after, but for a D1-4
Click to expand...

I have a D1-4 nose on my own lathe, and could do with replacing the cams in the spindle nose - as they often appear to do after years of misuse, the square key holes are cracking and although usable I would like to replace them. I'm guessing that Blighty might also want to buy in things like this rather than make, so does anyone know where to get them at some sensible price? I have had a quote from MSC Online in the US but they are silly money by the time they get to the UK.

Apart from that, I'm a great fan of Camlock - can't imagine how people survive with a lot of the smaller Chinese lathes with chucks held on with nuts and bolts!
N

Thanks L98fiero - been trying to track down this info for a while so I can try to build a receiver for my mill and rotary table to accept items still in the lathe chuck. Now I just need to try and make it!

nealeb said:
I have a D1-4 nose on my own lathe, and could do with replacing the cams in the spindle nose - as they often appear to do after years of misuse, the square key holes are cracking and although usable I would like to replace them. I'm guessing that Blighty might also want to buy in things like this rather than make, so does anyone know where to get them at some sensible price? I have had a quote from MSC Online in the US but they are silly money by the time they get to the UK.

Apart from that, I'm a great fan of Camlock - can't imagine how people survive with a lot of the smaller Chinese lathes with chucks held on with nuts and bolts!
Click to expand...

Nealeb, have you tried your local eBay, with just "D1-4 cam", and then save this search, with emails enabled. Then if affordable ones come up, you'll get notification.
I do see the MSC ebay auction, but I get this one, which is about $10UDS less ($27USD) and slightly less shipping (then MSC, but shipping to you will be considerable I'm sure):

D1-4 SPINDLE CAM. WE ARE A OEM MANUFACTURER FOR CAM LOCK PARTS. MADE IN USA.
www.ebay.com

There must be some local sales of these, unless this spindle nose is uncommon in the EU/UK manufactured machines, and only on imports from China.

thats looks like the exact drawing the guy was using where i got the attachment from. thanks for finding it. been looking for months.

yes you're right. on something like the cam locks would be better and easer to buy than to make. ill have a look for them, when/if i find them ill let you know.

The way I saved material was to make the chuck adapter a separate part allowing a much smaller piece of prehard 4140 for the shaft. 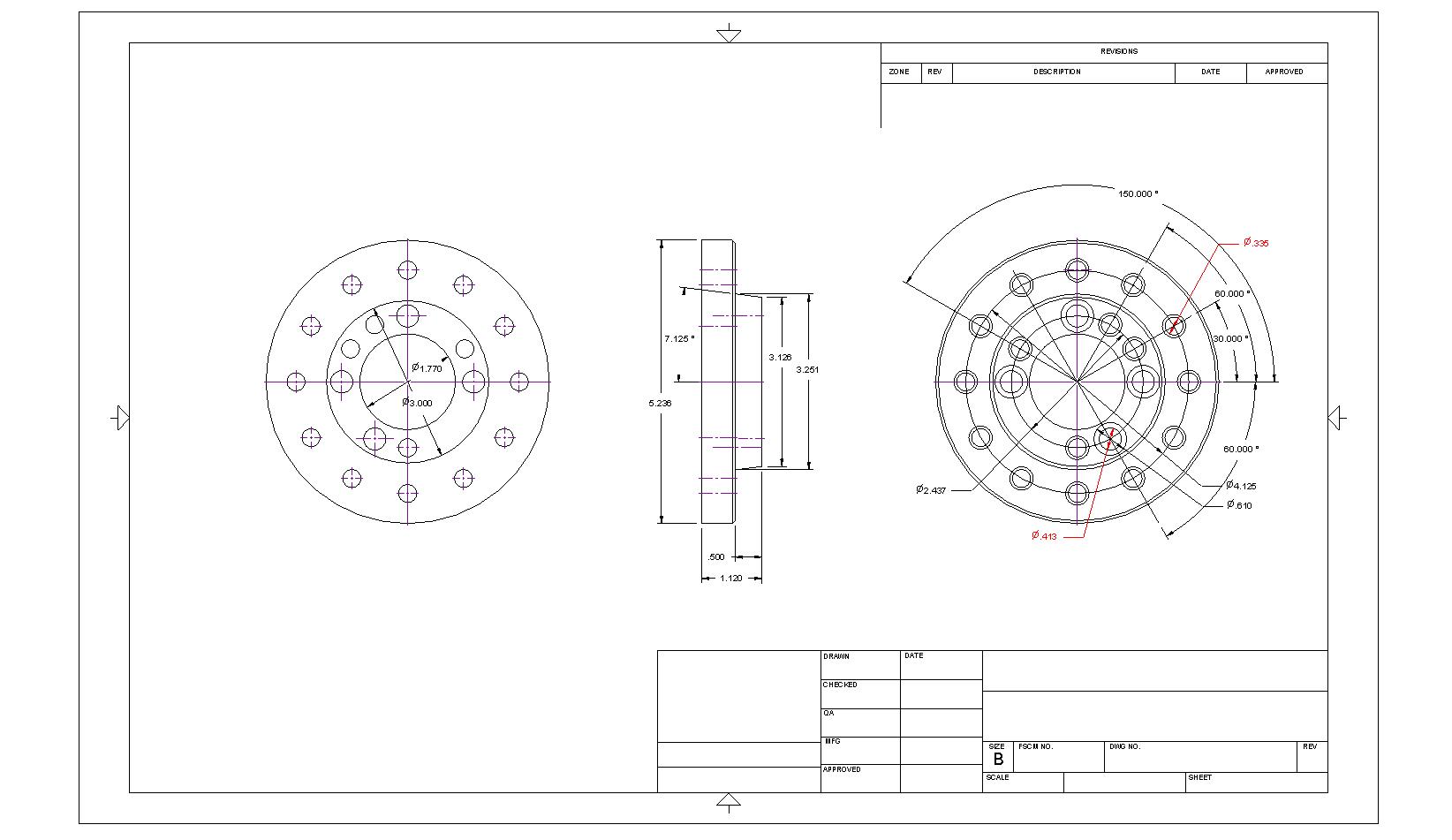 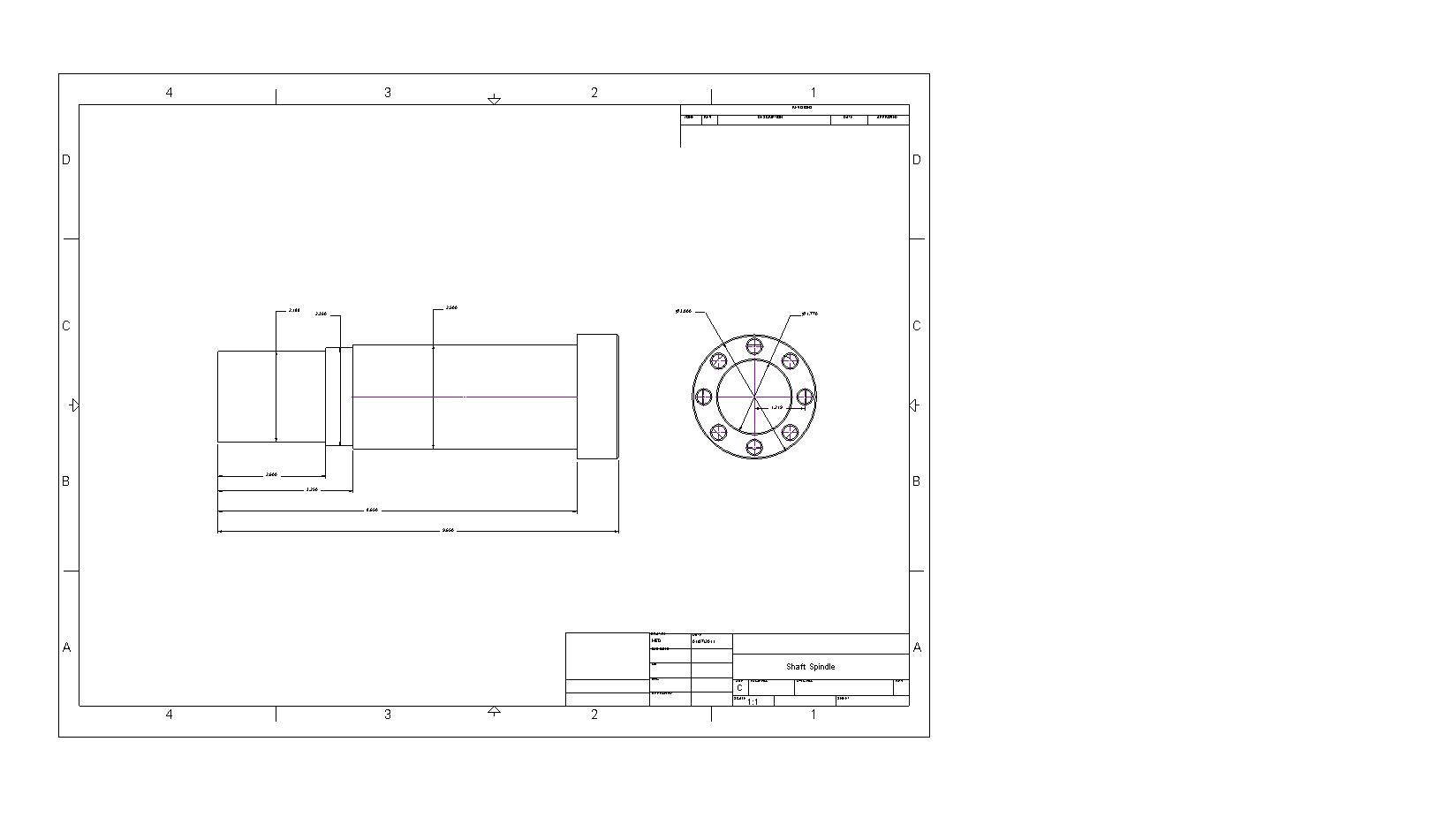 found some cam locks in the UK

gave Warco a bell... the parts are not listed on the website, but they do have them in stock. so you will have to phone/ email part No etc. then give your card details.

Mark Duquette said:
The way I saved material was to make the chuck adapter a separate part allowing a much smaller piece of prehard 4140 for the shaft.
Click to expand...

blighty said:
found some cam locks in the UK

gave Warco a bell... the parts are not listed on the website, but they do have them in stock. so you will have to phone/ email part No etc. then give your card details.
Click to expand...

Many thanks for that. I know that the bigger Warco machines use D1-4 but hadn't thought of going to them for spares. I'll give them a call.

Edit - just called them and they will be in the post shortly, "It's funny," said the guy on the phone, "But someone else rang and bought a set of three this morning as well!" Thanks again.

Ignator - I had tried eBay UK a few times in the past but while there's plenty of replacement pins for chucks/backplates, I've never seen replacement cams. Thanks, though - eBay is always worth a look, at least!
Last edited: Oct 8, 2020

I have a D1-5 spindle on my lathe. I had a faceplate that was missing the pins so I made my own from 4140, heat treated them in the shop and installed them on the backplate. Works fine. Dimensions were out of the Machinery's Handbook.
N

D1-4 cams ordered yesterday morning, left on the doorstep this morning. Not bad.

Blighty - I was looking again at that chunk of steel you are using. That's a mighty big bore down the spindle! My Smart and Brown is somewhat restricted as it is only 38mm clearance but it does have a 5C collet mounting built in to the spindle nose and quick-release collet closer fitted (although that reduces clearance to 25mm or so). I was wondering if you were going to machine the spindle nose for collets as well, but I'm not sure what's available that would match the spindle bore - or even if it's relevant to the machine you're building. On a related topic, I know that S&B supposedly used some special grade of taper roller bearing for the headstock of my lathe (although after 50 years, who knows what state it's in and if replacements would still be available) - what are you planning for your machine?
B

so i order them before you and you get them before me.....well how the hell does that work ;-).

I started doing this lathe about 7 years ago, then things get in the way and i return back to it a lot later. think it was two years ago i did the tool changer for it.

anyway... when i first thought of doing the lathe i had a job on the needed a 45mm dia bit of Ali. the cnc i had at the time was a boxford 240. this had a 35mm spindle bore, so had to make these parts by hand. The chuck i got for the lathe build had a 46mm, hence 46/47mm spindle bore.

had no planes in having a 5c or anything else at the face end, was going to make/buy 5c collet chucks. and anything else that would fit on the face. Was also going to have a collet closer for the 1000's of little brass things i had to make, but as i dont do them any more there's not much point. I should do really, just to finish it how i started it.

bearings... two fixed taper roller bearing in the front and floating single bearing at the back.

does your cam fit?
N

I live in a small village in South Devon, which sometimes feels like being slightly to the West of the edge of civilisation. But our broadband is lots faster than when we lived in Hampshire and the postal service is spot on!

I'm currently trying to install the new cams. Or, more specifically, I'm trying to remove the old ones! Just come in from the workshop to print off a diagram of how the locking screw and cam all go together as I've taken out the screw and the CAM doesn't exactly drop out. But it feels as if there's probably some old gummy oil in there, and it's possible that the head has spread a little where the square has split at the corners. We shall see...
B

was there a screw and a spring?

if there was. there should be a little bit of metal still in there. this has to be removed as it locates the cam in its unlocked position.
N

What there was, was a whole lot of mucky grease that had probably been congealing for the last 50 years! Mine has allen bolts holding things together, so I took those out. Couldn't see a spring in the first one; in fact, there only seemed to be two springs so when one went missing I don't know. I did look at taking the cams out a little while ago so it's possible the spring dropped into the swarf tray at that point, never to be seen again. Anyway, the two remaining springs were removed but shifting the locking pins themselves was a bit of a struggle. Eventually I found an old 5.1mm drill with a bit of a gnarled shank which wedged into the hole in the pin and with a bit of twisting and a fair squirt of WD40 they all eventually came out. I cleaned everything for reassembly but fortunately checked the fit of the pins in the cam grooves before reassembly. One was OK but the other two were a bit tight and I ended up stoning the flats on the pins to just free them a touch. Looks like the cam grooves were slightly undersize. Apart from that, and finding a replacement spring, they went together OK. Bit fiddly trying to line up the locking pins with the cam grooves but I used a bit of wood dowel jammed in the hole to twist the pin while moving the cam about with its key and eventually they fitted.

Tried my favourite 3-jaw and everything seems to line up OK - no adjustment of pins needed for cams to lock between the marks. Overall - successful operation. And all done less than 36hours after ordering the replacement cams! Hope yours arrive soon.
M

Blighty,
If you are in the US, you might want to check out ebay right now: