When I ordered my DRO from DROPROs they were out of stock on the long scale I needed, so they offered me the higher res scale. I figured sure, more accuracy is better so I was happy. After using it for a few years I wish I had not. The last 2 digits are just fast blinking lights- the slightest movement anywhere and they change. I often think about covering them with tape so they dont distract me.

With the hobby class machines thinking you can measure out to 5 decimal places is plain foolish. Match your scales to your machine and dont look for more precision than is realistic.
P

I always assumed the measurement resolution (scale/encoder) and display resolution were 2 different things. On my box (different brand) I can choose to display 0.00X" on one axis and 0.000X" on another if I don't want to see more. I agree, long digits it can be distracting (and very likely outside the real world achievable scope of hobby level machines & tooling anyway).
D

The fact is (after designing and building my own readout), the Chinese scales (also used in cheap calipers) actually have a bogus resolution of .0002 which means in software you have to derive .0005 (half thou) for the display. But, if you look at the data from the scale as it sits quietly on the bench it bobbles back and forth two tenths from 4 to 6 tenths. There is no real half thou data. So in software you have to display 0 when it's 4 and 5 when it's 6. So even the half thou reading on most readouts is suspect and that's why even it can come and go from 0 to 5. To display the 2 tenths directly is hopeless with the cheap Chinese scales they bobble so much. It may be different for glass scales and expensive calipers. Most of them have a different data format.

One last little kick at the can here before I finish the DRO install. After making a few cuts with my lathe, I could see that a lot of the chips and cutting oil were going to fall right on top of the scale cover. This doesn't alarm me. What did alarm me a little was that much of this chips and coolant fell behind the vertical ridge on the scale cover and landed on top of the topslide. So--Today I removed the compound rest and ran a good bead of silicone sealant right down the joint between the back of the scale guard and the topslide. (right where the point of the pencil is) Fortunately there is a fairly large chamfer (about 0.080") on the sides of the topslide, so after wiping everything dry of oil and cleaning it with some laquer thinners, a good fillet of silicone filled the chamfer in completely. Now I won't have to be worried about cutting oil and metal shavings and possibly iron dust finding their way down to the scale and read head.

I have been using the DRO set-up on my lathe for a few months now, and it's absolutely wonderful. Even though they are an expensive brute of a thing, they are well worth the money paid for them. They do however, show up some things that I wasn't really aware of. I like to have the gibs on my cross slide free enough that it lets me move the cross slide with very little effort. With the DRO in place and operating, it soon became clear that when taking a cut parallel to the axis of the mill, the cross slide would "back up" of it's own accord from whatever I had it initially set at. Okay, that is easily enough fixed by locking the cross slide before taking a cut each time. This is a pain, and the bolt which locks the cross slide in place is not all that convenient to get at with a hex wrench. Way back on posts 93 thru 96 I showed the lock handle I had made up for the carriage lock. It works great, and although it takes a bit of fitting to get the required clearances looked after, the handle is much more convenient than grabbing a wrench each time to lock the carriage in place. I wanted a similar hand operated lock for the cross slide, and after a mornings farting around I have one. Basically, I silver soldered an extension onto the head of the cross slide lock bolt (the only one of the gib screws that doesn't have a locknut). Of course, it falls right into the area where the carriage lock handle is, so there is a bit of measuring and "try it and see if it clears" engineering involved there, but it works and it clears the top of the carriage lock lever. Now I can tighten it with my fingers tight enough that the cross slide doesn't move when I'm taking a longitudinal cut under power.

I was taught to get in the habit of tightening the cross slide with every longitudinal pass like under power feed. It seems like an extra thing to do, especially when roughing where you are less concerned with dimensions. But I think what you call 'backing up' is force exerted directly on the cross slide lead screw & anti-backlash nut assembly - probably the two 2 components you want to minimize wear & tear. Especially under heavier cuts. Other benefits are surface finish & holding dimension.

I'm intrigued by where your carriage lock bolt (extension) enters the cross slide. Don't they all just contact the gib strip in the same way? In other words, couldn't you just use the next hole down the line? My lock is more centered in the lathe so I just replaced the cheesy wing nut with a short-ish knurled knob which mitigated a longer extension. But I have a different gib adjusting system with adjusters on either end.

Anyway, this is what we chatted about before. Personally I would rather be doing this tightening on the RHS of carriage vs. the LHS adjacent to the spinning chuck. But that's just me

BTW, I'm not sure if your lathe is like mine but I happened to have the carriage off mine right now on another issue.

The carriage lock clamp bolt is a bit of bad engineering IMO. There is very little contact area of the foot to the lathe rails. That's an irritation I could live with. But it has the habit of losing the 'set' & now I know why. In certain positions there is nothing preventing the foot from spinning. So I'm going to make a rectangular block with slight clearance offsets. It will have much more contact area & be a positive clamp down with top nut or handle. 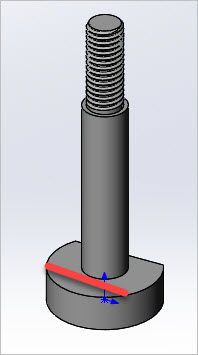 Petertha--you are absolutely right, both in your assumption that the carriage is backing up because of pressure on the cross slide lead screw and that any one of the gib screws could have been used as a lock. I just used the gib screw that came with no nut on it by "default".---It was that way when I brought the lathe home from the store.
P

My carriage gears are coated with a waxy, cat mung which I have difficulty calling grease. Turns out some was also inadvertently smeared into some oil migration passages which lead to some shafts & bushing wear surfaces via the external oiler nipples. Therefore my ritual lubrication schedule was just wishful thinking all these years & explains the back pressure & oil dribble out the little oiler check valve ball. It was accomplishing zilch in terms of lubrication. So... I'm learning not to trust 'factory' as much.

When I'm all done I'll post some pics. I'm also going to plate off the bottom & convert the carriage case to a bath oil system like many comparable lathes have these days.

There is no sense complaining about the machine. It actually runs quite well & its amazing how they can build those things , ship 1000 pounds from the other side of the planet & make some profit through a middleman dealer. But you have to kind of treat them like a kit or hobby car where occasional tweaks & improvements may be required.
L

Brian Rupnow said:
Sledjunk--Really, the quickchange toolpost they sell fits on this lathe with no modification to the lathe or to the toolpost if you make the nut I posted. The only limiting factor is that the largest cutting tool you can use is a 3/8" square one. Where are you located?---Brian
Click to expand...

Hi Brian,
I've just purchased this lathe. It won't arrive until the end of November. Do you happen to know what the model # of your quick change tool post was?
Thanks

Thanks for the quick reply.

Linz said:
Thanks for the quick reply.
Click to expand...