My understanding is the bought them jet-packs, and taught them to fly, and then told them where to go to deposit their urine. They got an apple as a reward for every successful flight.
Click to expand...

AND, the cool part of that is that the Peace Tower was finished in 1927, Canadians, eh?

You could try Basil's idea, it won't take off as much as you have left, but it should finish and polish your journals.I dreamed about this last night
Keep your fingers out of the way!
Doug

I had an adventure trying to get Popsicle sticks last week without ordering them from Amazon or Walmart and wasting a couple of days waiting for them. Instead, I decided to use my 3D printer and wasted the entire week.

Starting from the beginning, I needed a G-code file and to get that, I needed a 3D solid model of a Popsicle stick. This didn't take long, and I quickly made a version 1 of what I started calling the Fat Popsicle Stick - because I wanted to put a nice handle on it.

The dimensions are that it's 5 inches long, the thick part of the handle is 1/2" tall, and the stick portion is 0.4" wide by 1/16" thick. Those numbers were completely PFA. I mean, I've had Popsicles, just not in the last 40 years or so. They seemed about that thick.

The first print failed. I watched it for the first few minutes and came in to do other stuff during the remaining hour the print would take. Just as I was about to go check on it my wife came in to tell me the thin, stick part was off the table. I went out to check it out and figure out what to do. I thought about putting a spot of glue under that end and pushed on the very end to see if it was flexible When I did that, the whole thing popped off the print bed. No choice left but to kill the job. The good news was that it was about 3/4 done and probably usable. So I gave it a try and found two problems. First, it was too wide. The design was 0.40, but it came out a little wider. When I wrapped sandpaper on it, it was too close to the .438 of the journal. The second problem was that it felt too flimsy.

Within a few minutes, I had a redesigned "Version 2" stick ready to print. I doubled the thickness of the stick portion to 1/8" thick. Stiffness in bending here is proportional to the fourth power of the thickness, so doubling the thickness should make it 16 times stiffer. The minor change was to drop the width to 3/8".
This began some arm wrestling with the printer that still isn't fully resolved, but during the start of this print, I noticed the right front area looked thin, meaning I should re-level the printer bed. That turned into updating the software in the printer to use some new features I found out about in a video refresher on how to level the bed.

OK, time to print Rev 2 and very quickly found a problem. The G-code was having it print the 1/8" thick part but left it the original 1/16" on the back. Then it went back to print the handle on top of that thinner area and it didn't even attach to it. A real mess. I ended up with two parts barely attached to each other.

So I removed it, started printing again and went into the house for dinner. After eating I went to check it and found it had printed the bottom half of the 1/8" thick part and then got lost. The extruder went the width of the stick up in Y and some random offset to the left in X. Totally FUBAR. It left me puzzling over which piece of software screwed up or if it was the printer hardware. There's three possible sources of software errors: the new firmware in the printer, the slicer software that creates the G-code, or it could be that my CAD model had defects I can't see.

I decided to start everything over from scratch, except for leveling the bed. I redrew the model and sliced it with the other slicer software I have but isn't the one I regularly use, Cura. That required me to convert the model to metric in Rhino. That's not hard, just another step to do, but not having to do that is one reason I switched to the other slicer software, Prusa. Then I started printing the new G-code. This one printed fine and was done in an hour.

If you lost count, I had to print it three times to get one to come out right. The one that came out in two pieces is usable, I had to cut off the loose filament and glue that one together. 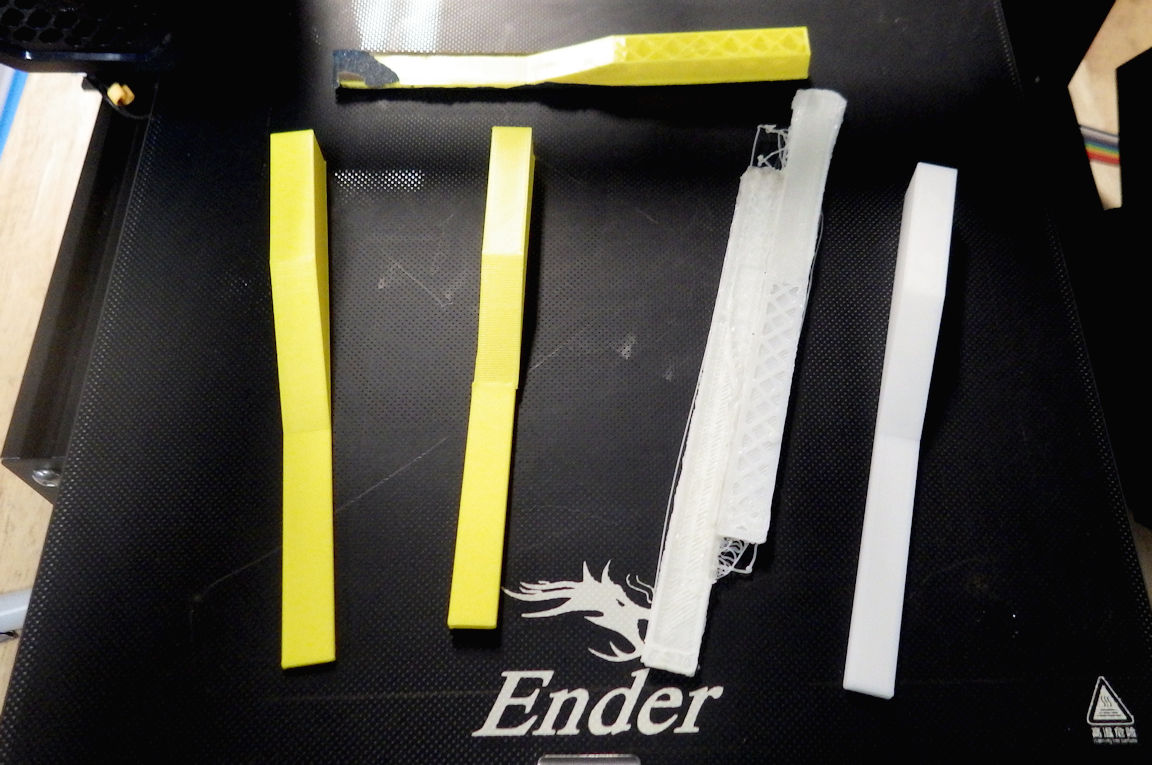 The Fat Popsicle Stick family. In the back is the Rev. 1 stick that popped off the bed before it was done, but was usable - except for being too wide. It has 220 sand paper glued to it and I actually ran that on the journal for a little while. The one on the left is a second Rev. 1 that I printed accidentally. Second from left is the first Rev. 2 that printed in two pieces. I shaved all the loops of filament off the bottom of the back's top piece and glued it to the bottom. The odd looking white mess is what came out of the printer losing its X and Y coordinates. The last one on the right is the finished Rev. 2 stick that printed properly.

After that aggravation with the printer, I started a thread for help over on the 3D Printers forum and seem to have improved things. It's not as good as it was before all this started, but it's close.