Peter, can you give us a picture of the "TFT-controller"? The name suggests an LCD display. As best I recall, the base GRBL platform, using an Arduino Uno or Nano, does not have enough memory (and probably not enough output pins) to handle an LCD display, so if there is one on your CNC, either this is based on a micro-controller board with more capacity (an Arduino Mega or a 32-bit implementation), or there are two micro-controllers involved. Your description of "connecting the Arduino directly" makes me suspect the latter.

If this is the case, then there is presumably a base GRBL setup using an Arduino Uno/Nano, which handles the real-time motion control and which stores the key $-parameters that determine, e.g., how many steps / mm for each axis. But then there is a second micro board, possibly another Arduino, or possibly something like a Raspberry Pi; this micro is handling the LCD user interface.

If this second scenario is true and I have described it correctly, then this is likely where much of the confusion above is coming from. You are attempting to use TWO competing user interfaces at the same time. A program like GRBL-Panel or UGS is expecting to connect directly to the base micro-controller (typically an Arduino) running the GRBL firmware. These programs handle the user interface, and send G-code to the the Arduino; the GRBL firmware running on the Arduino translates the G-code into the real-time signals needed to move the steppers and read the sensors. These programs also will send the commands to read and set the $-parameters on the Arduino / GRBL firmware.

But if you have a second micro, it is running another user interface, interacting through the LCD. Presumably there is at the very least a rotary / click control that allows you to scroll through menus. Likely there is also an SD-card slot; you can load a G-code program onto the SD card, put it in the slot, select it via the LCD user interface, and run it. Note that this second micro may think it is the only user interface, the only one sending the G-code to the Arduino, and the only one that stores, reads, and sets the $-parameters on the Arduino / GRBL firmware.

Now, if the last sentence above is true, and if you attempt to hook up GRBL-Panel or UGS to this second micro, you have a user interface attempting to send G-code (including setting the $-parameters) to the Arduino, but it is getting intercepted by another user interface that wonders what the heck you are doing.

Again, the disclaimer - all of this assumes that I have described your system correctly, and I could easily be incorrect - it is hard to diagnose at a distance. For example, it could be that the second micro is more like Marlin on a 3d printer - Marlin provides a very basic user interface via LCD display, but it also knows how to accept G-code coming in via the USB port. So ... pictures, especially pictures of the electronics, may help!
L

Any parser will read the configuration from the Atmega 328 micro, but will not save any change unless you want to.

What I think is happening is that you MUST double click on the parameter after modifying it in a way that GrblPanel save it to the microprocessor.
In this way, no matter what parser is used, will read the new parameter.

Then, if you are using different boards, you may have different configuration saved in each one. Take a look at it and take care!
Last edited: Sep 7, 2020
L

How to set a job, step by step: 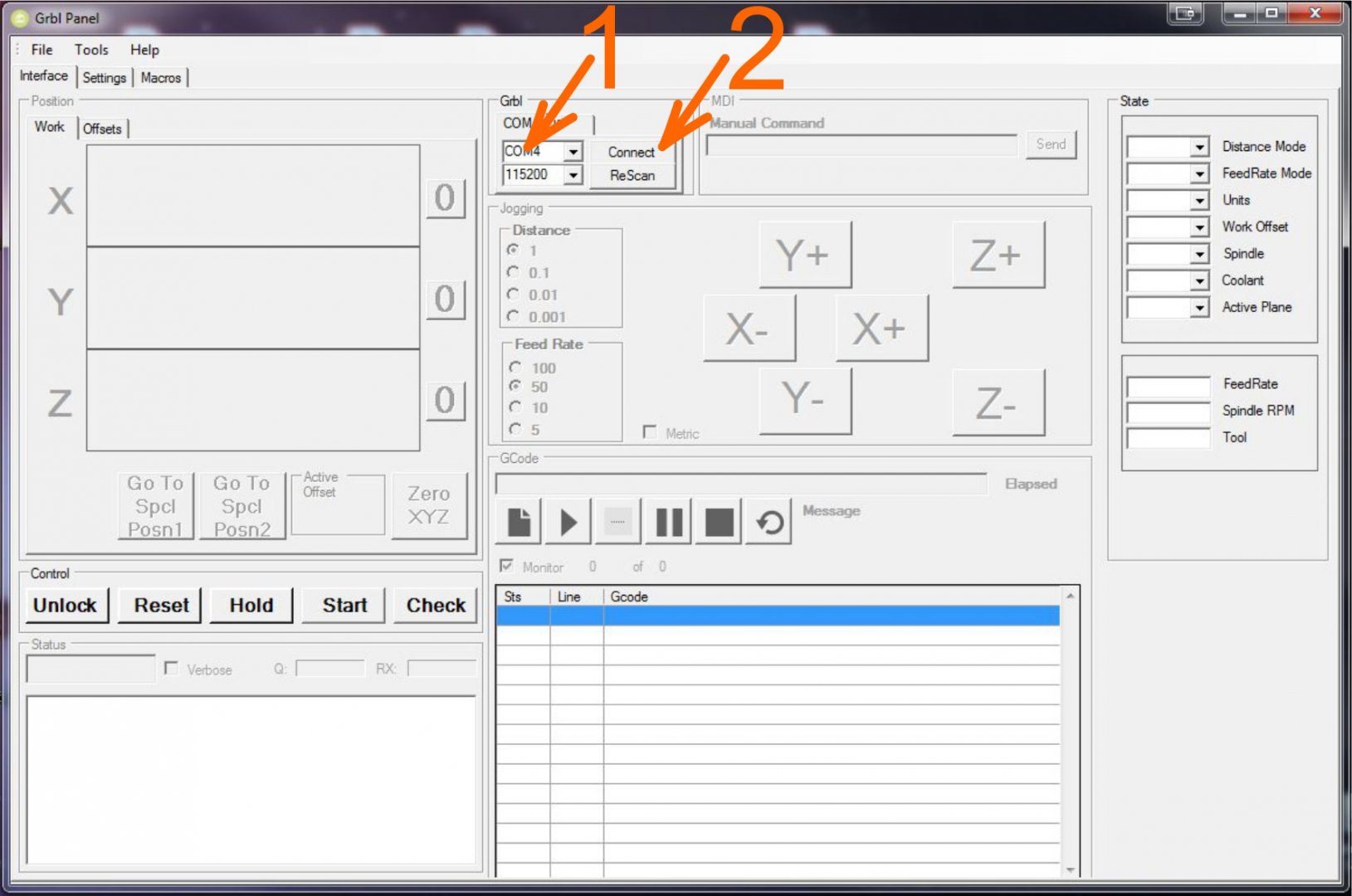 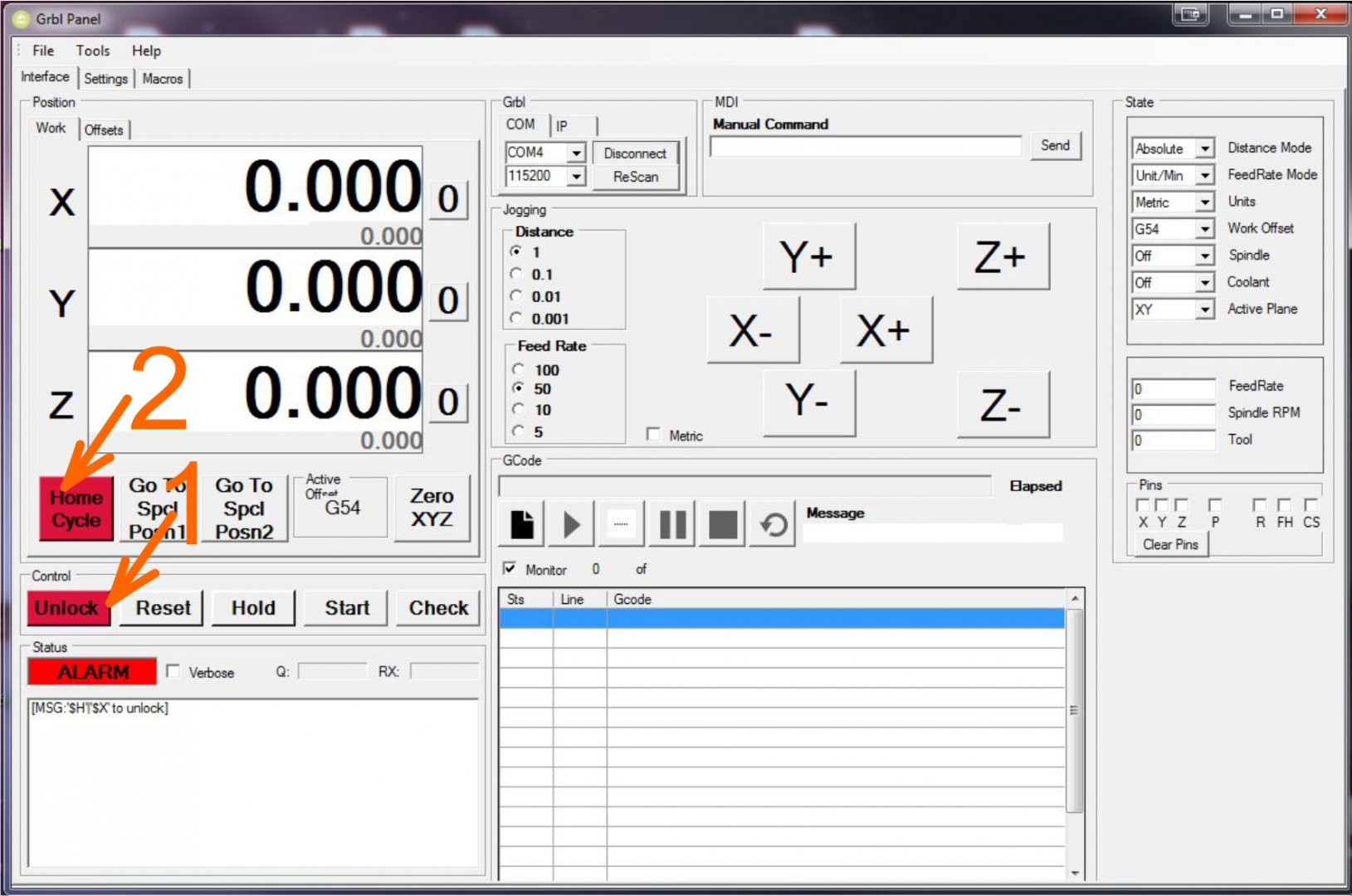 Place your material stock and move your axes to where you want your zero. 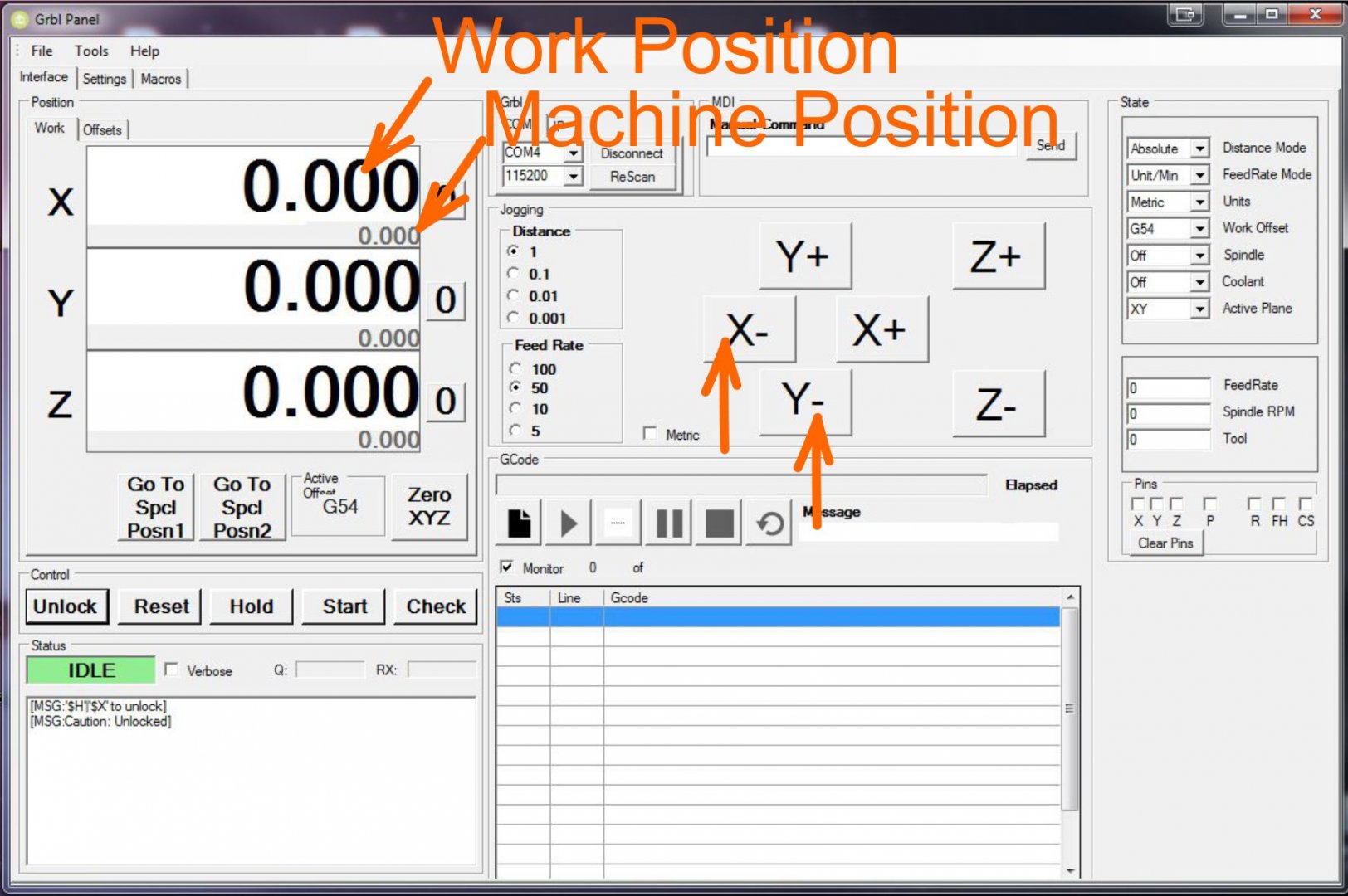 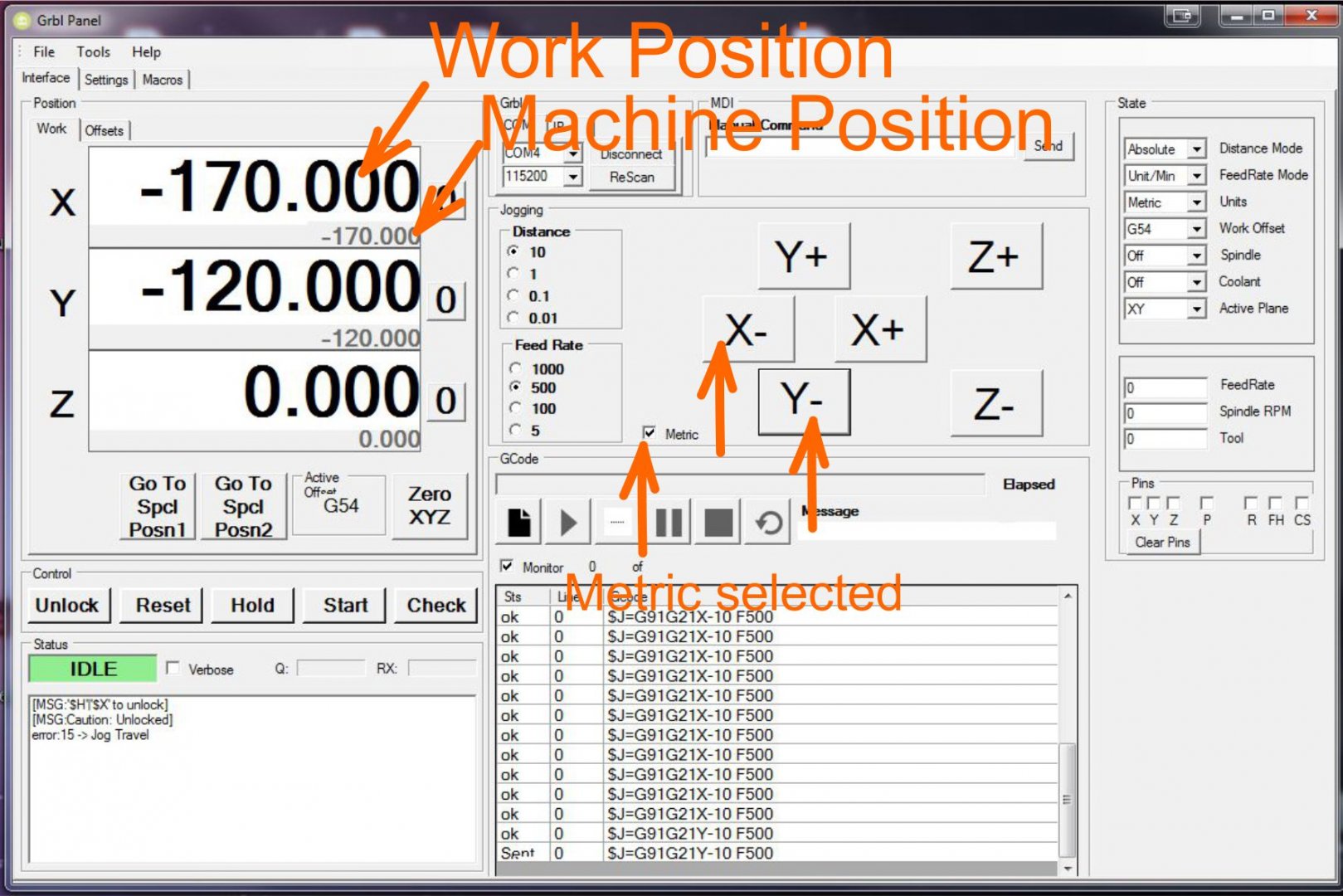 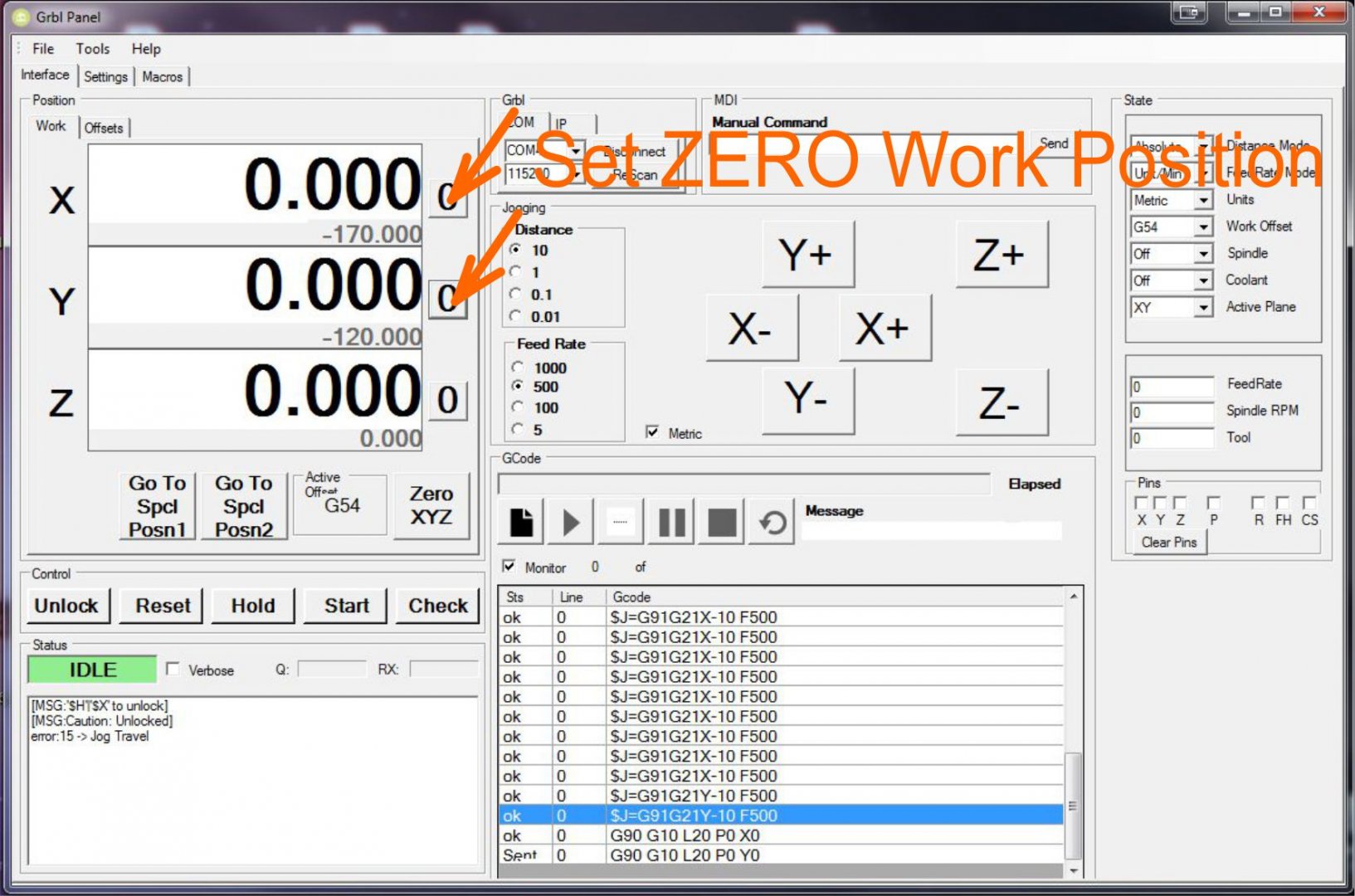 Now you should set your Z zero too. There are two ways. You can use the old method with a piece of paper and move the Z axis until it touch the paper and then set the zero in the same way as the other axis or, you can use a probe.

If you want to use a probe, this is the way: 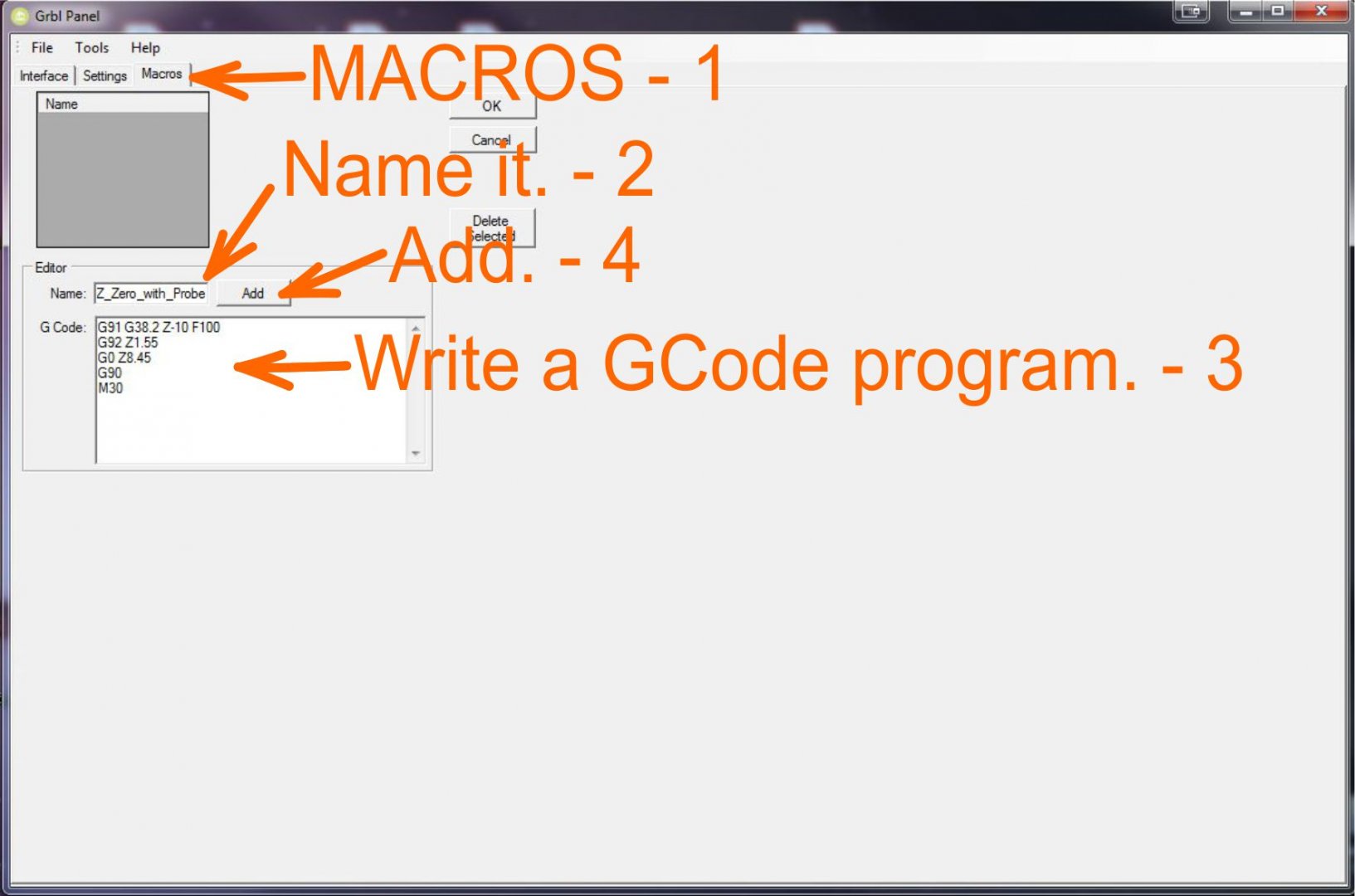 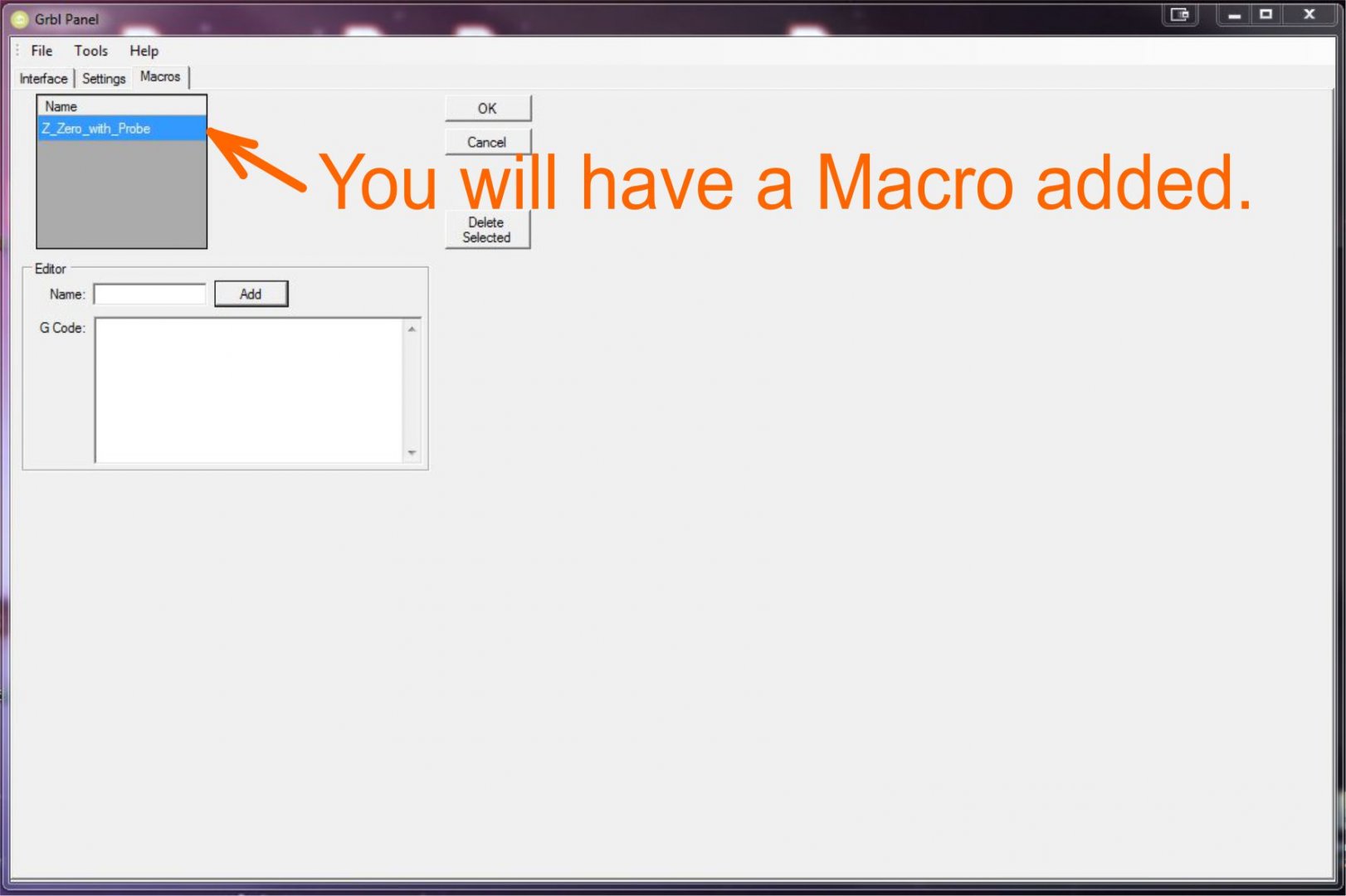 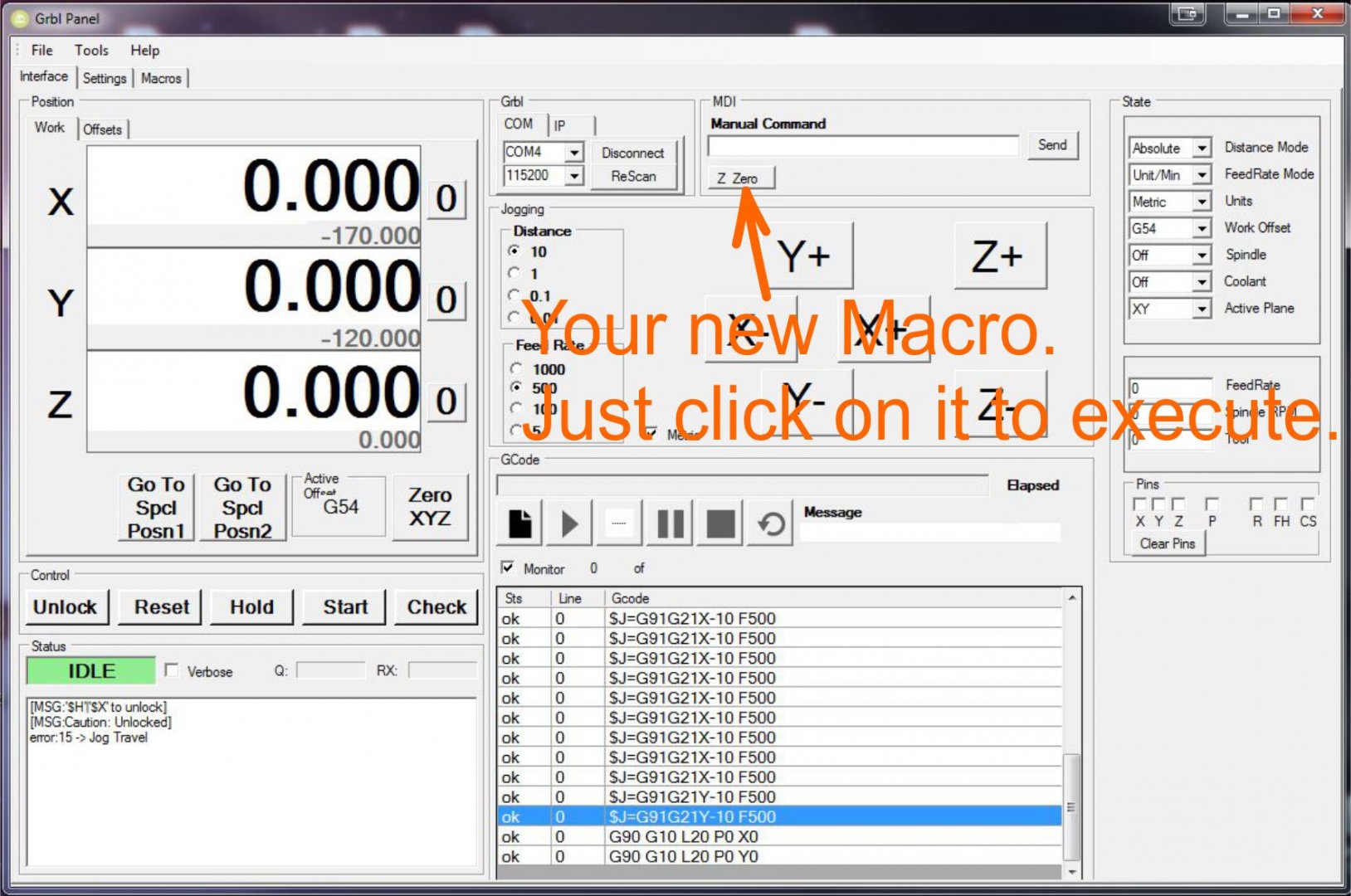 I wrote a little GCode program to do it.
Here is de code:

TAKE CARE WITH ALL THIS. Put a piece of wood on your table to do the test. Do not blame me if you ruin your machine!

Leonardo, thank you so much! This is more than helpful! My old brain is no longer willing to take big jumps. So step by step I am getting along. And collect a bundle of information from all sides/sites.

awake said:
Peter, can you give us a picture of the "TFT-controller"? The name suggests an LCD display.
Click to expand...

Thank you for your advices, here are the images of the 1.8"controller which 1 chose over the 1"TFT- controller for better viewability - my eyes are a bit tired from 50 years programming and service.
There is now even a 3.5"touch screen controller available, but -as you have mentioned- the intended use is for standalone machines where you insert a SD-card with your files, or transfer files by WIFI to this card. My idea had been to use this variant as the shop is some 12m from the house/network router and has no airconditioning because of small size, so it is boiling hot in summer and freezing cold in winter... So starting a job and leave, control by camera, and hope for the best, that is what I was looking for.

Okay, definitely a second micro-controller. Does it say anything like "OctoPrint" when it boots up? That is one open-source program that will run as a web server and connect to a CNC machine. As the name suggests, it was first designed for 3d printers, but it has been expanded to be able to do GRBL CNC as well.

No, it just says CRONOS (producer?) and then follows up with Control/Files/SSet.
Filetyp is .nc which is the next hurdle. Documentation is nil. Is this the only filetype or does it accept others too? Have to try the 'net... And how to convert .stl into .nc?
L

Peter, stl (stereolithography ) is a type of 3D files. It is a 3D model of the object you want to produce. You cannot "convert" it to anything but you can process it using a CAM software to generate the toolpaths for 3D mechanizing or a slicer for 3D printing.
Once you have the toolpaths generated you will need to post-process the job to generate the nc (GCode) file to be able to send it to your machine.
I do not use Fusion 360 because I do not like the on-line software so I cannot tell you anything other than it is great for sure. What I use is VisualMill and Aspire to do these tasks.

Right, what Leonardo said. The .stl file is a model of what the part looks like, but doesn't give any indication of how to produce that part. For 3d printing you use a "slicer," which divides the model into .2mm slices (for a .2mm layer height - or .1mm for a .1mm layer height, or so on) and calculates where to move the print head and how to deposit the filament to build that slice. It generates the g-code to produce the corresponding movement of the axes and extruder, one slice at a time, starting from the bottom.

For your CNC, you need software that works somewhat similarly, but starting from the top, calculating not what needs to be deposited, but how to move a cutter of a certain size and shape to remove any material other than the desired part, at a rate (depth and speed of cut) that is appropriate for the cutter, the material, and the rpm of the spindle. Software to do this is called CAM, computer- aided manufacturing software. It is built-in to some 3d CAD programs, such as Fusion360 and (to some extent) FreeCAD. I've read bits and pieces that suggest that there is other CAM software that can work from an .stl to generate the corresponding g-code - but I don't know any details.
You must log in or register to reply here.
Share:
Facebook Twitter Reddit Pinterest Tumblr WhatsApp Email Link