Colin--since both cams are attached to the same shaft, any change I made influenced both cams. What I actually did was retard the cam-shaft, which retarded the two cams attached to it.---Brian
O

Location
Woodstock On Can

Brian: I wondered if you had moved the inlet only as the cams are held on the shaft with set screws . That is if I've read the drawings correctly. Colin

Colin--I didn't move the inlet only. To get at the cams and set screws, you have to completely disassemble the engine. I set the intake and exhaust cam lobes up to have 98 degrees of separation and they stayed that way. The first time I assembled the engine, I had the two cams 180 degrees out of phase with each other (Don't know how I managed that), and the engine wouldn't run. I completely disassembled the engine, removed the camshaft, and reset the cams the way they should be, then reassembled it and it ran, albeit very damned fast and with no throttle response. I decided that the cam timing was more or less correct, but based on air puffing out the carburetor while the engine was running, I deduced that the cam timing needed to be retarded a bit.--that was easy to do---I just set the crankshaft in the correct position rotationally, removed the gear cover, loosened off the set screws on the crankshaft gear, and turned the crankshaft gear by hand until I seen that the exhaust was starting to open, then locked up and reassembled everything.---Brian 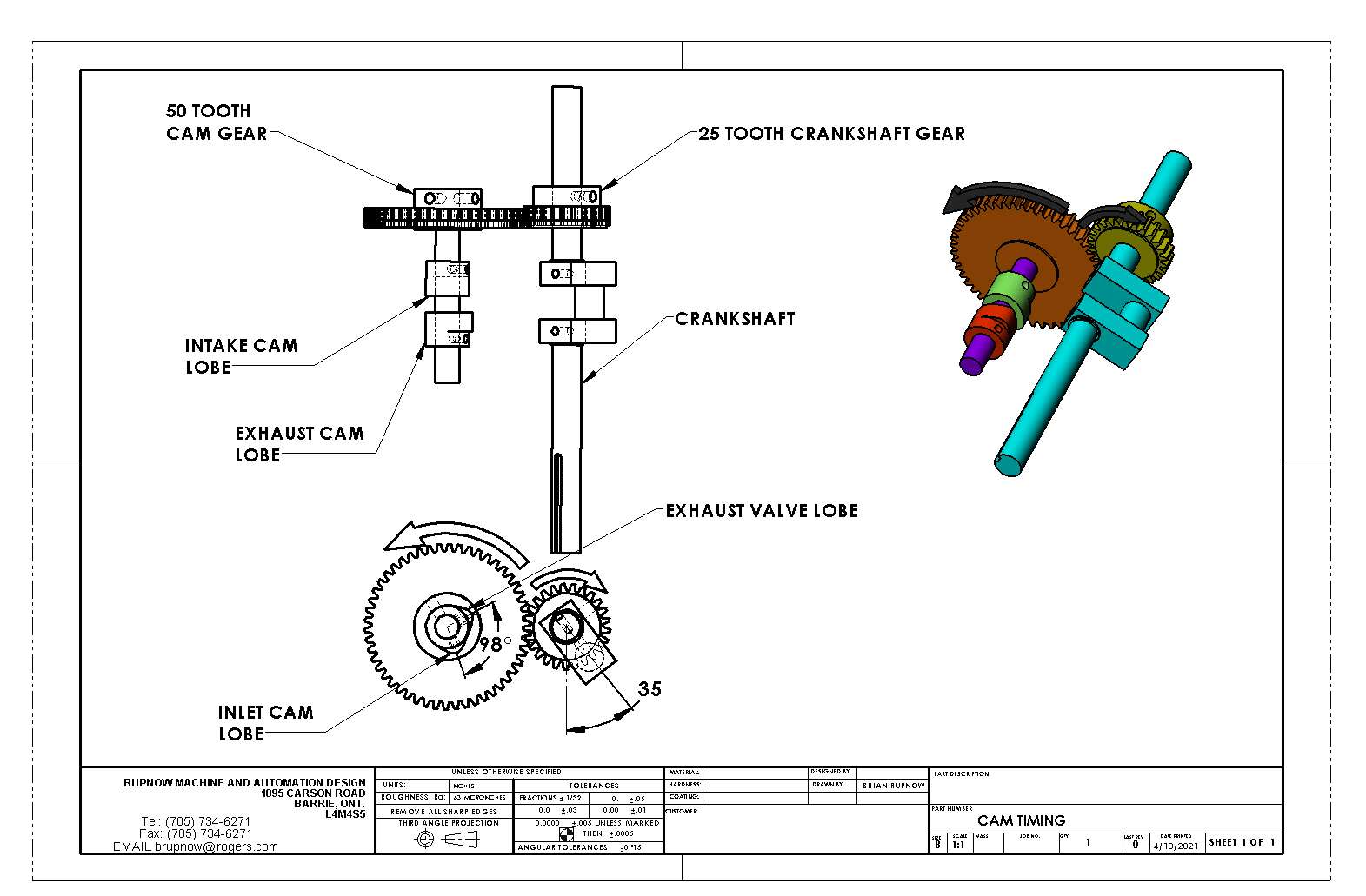 Brian you do such good work and always looks nice also, sure are glad to see your post knowing that we are in for a treat, thanks again for sharing with us, Joe
T

Brian Rupnow said:
I just set the crankshaft in the correct position rotationally, removed the gear cover, loosened off the set screws on the crankshaft gear, and turned the crankshaft gear by hand until I seen that the exhaust was starting to open, then locked up and reassembled everything.---Brian
Click to expand...

Wait -- all the hot rod engine assembly instructions I've seen say to just line up the witness marks on the cam gear and crankshaft gear.

I have been asked about gaskets on this engine. There is a gasket 0.030" thick between the bottom of the cylinder and the crankcase. The head gasket is 0.030" thick. There is a gasket 0.015" thick between the two sides of the crankcase. These are simply standard utility grade gaskets, cut from rolls of automotive gasket material. Same material as would be used for fuel pumps, waterpumps, etcetera. I do not use a special grade of head gasket material anywhere on the engine.
J

Brian....What did you use for a piston ring? Cast iron or O-ring? 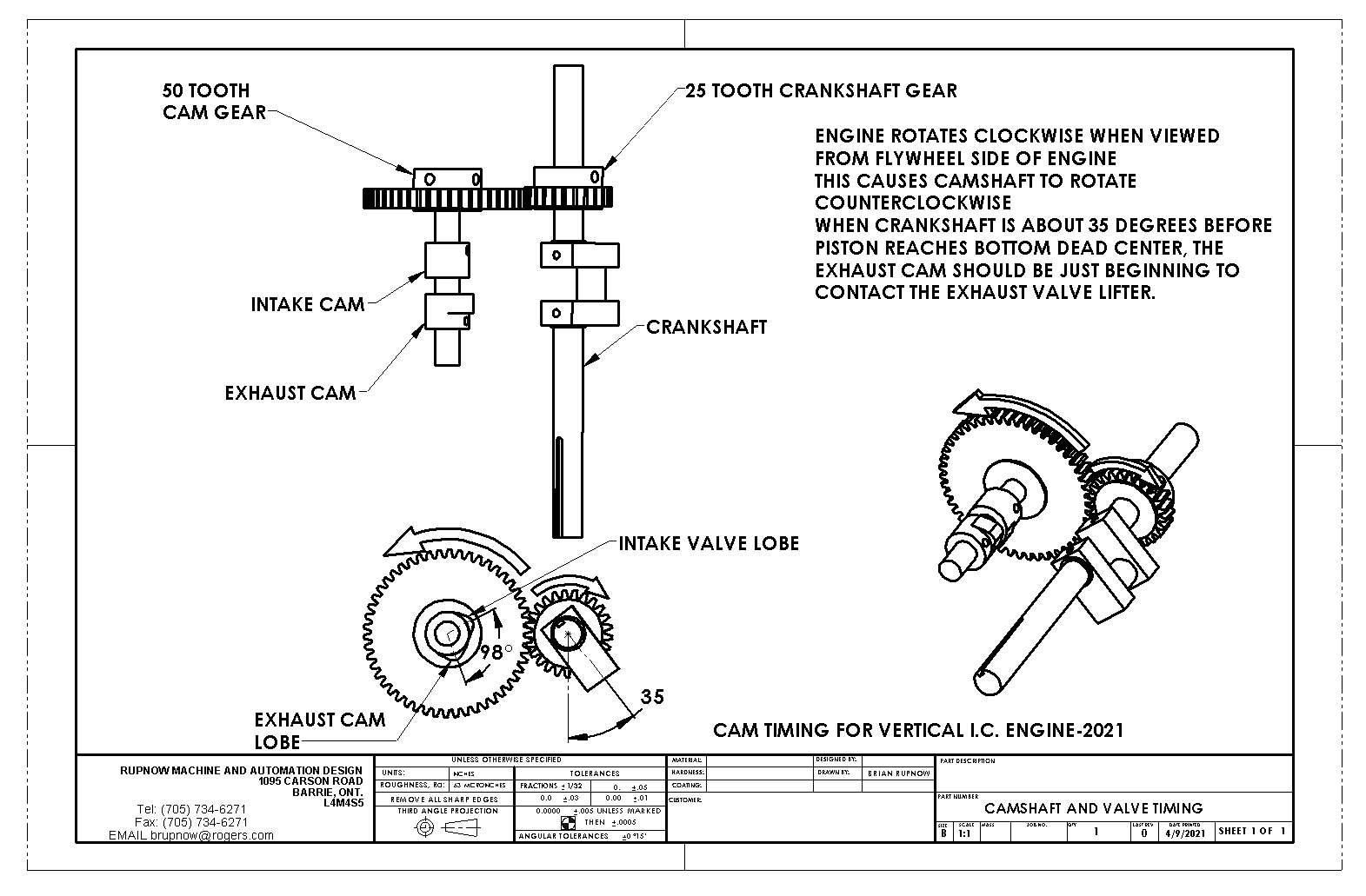 Today I made an "add on" for the gear cover. It's not so much a safety thing as a noise reducer. Yes, if you were careless enough to stick your finger in there while the engine was running, it would probably give you a very quick manicure. The spur gears which drive the camshaft are noisy little devils. The 0.100" thick piece of aluminum I added to the gear case will fill up the gap and cut down on the noise. I find it almost impossible to add on a piece like this without screwing up the paint on the part I'm adding to, so it was simpler to give it a five minute soak in laquer thinners, wipe off any remaining paint, and then repaint the entire thing. 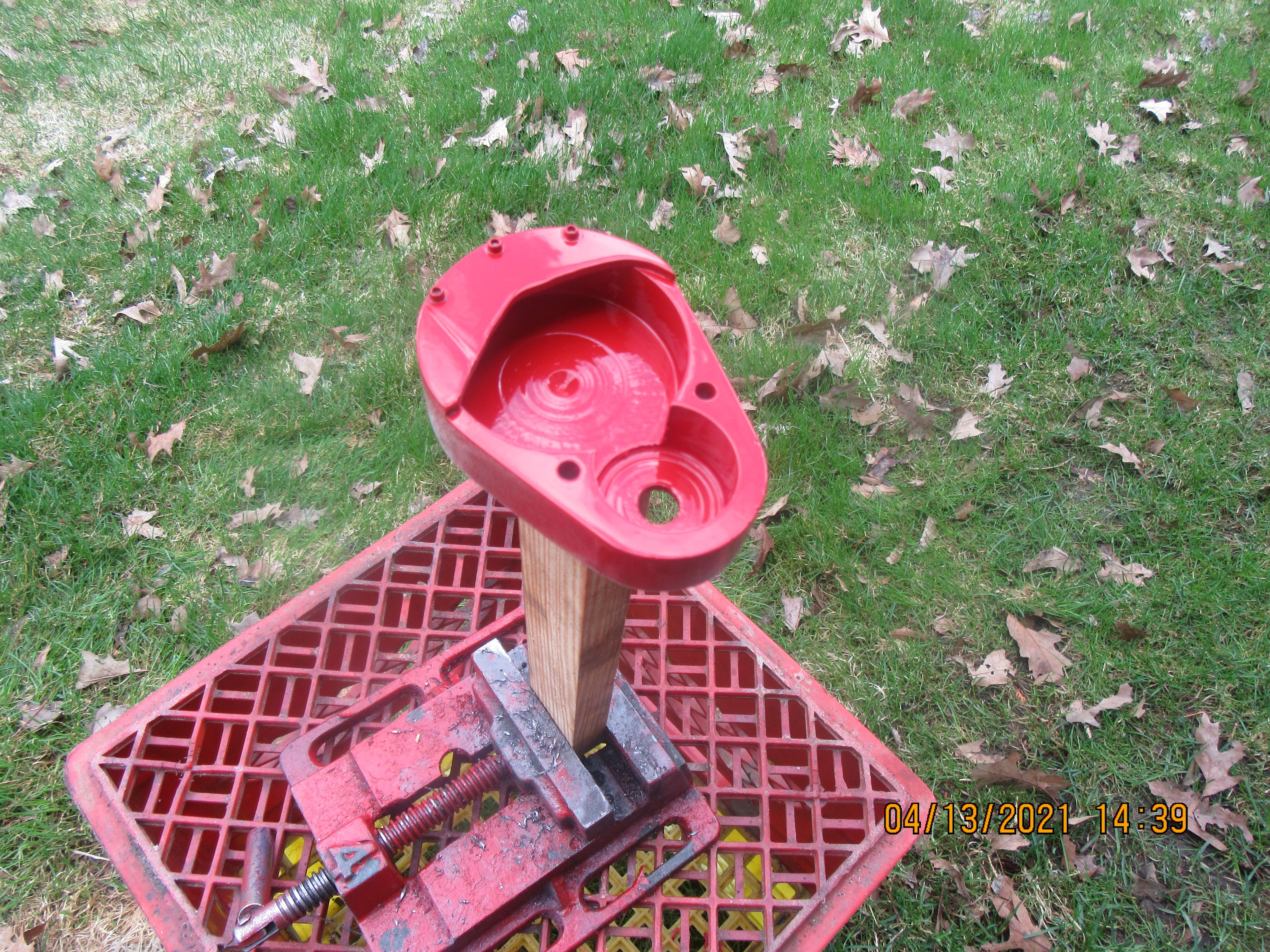 Now we are going to try something a little different. The engine runs well as is, with a Viton o-ring on it, but I'm bored doing nothing, so now we are going to see how it runs with cast iron rings. If you are one of the people who purchased plans for this engine, fear not--the new piston drawing and anything relevant to it will be posted here. This morning I purchased a foot of 1 1/4" diameter grey cast iron from my local vendor for $40.(He didn't have any 1" cast.) That seems like a lot, but then there should be enough material there to build about 10 pistons. I have ordered a set of two compression rings from Debolt The price was shocking, at $52 Canadian funds, but that is $10 American for each of the rings and $20 American for shipping. The top of the new piston will be about 0.080" taller from the wrist pin, to give the engine a bit more compression. I won't be buying any more cast iron rings in future, but will be making my own. I am not going to start machining the new piston until I have the rings here.---Brian
T

I'll be interested in your experiences when you get around to making rings. There seems to be a lot of ways to succeed, but a lot more ways to screw it up! Study is warranted before actually launching into the effort to do the job.

When you said you bought 1-1/4" grey cast iron bar, I assumed that was to make the rings, rather than the piston. Especially with shipping costing the same as the two rings.

Yes bob, cast iron is the material for rings. It is also great for pistons in slow running engines. The material I bought will make either rings or pistons. I can not rework the existing aluminum piston to accept cast iron rings.
J

With all this debate about rings lately, I'll be watching intently.
Nonetheless, it's a great little engine Brian.

I can't wait to see what you come up with next.

AFAIK it is usual to use a better grade than soft grey iron for piston rings - such as "17 ton" or "Mehanite". I am not sure, but I think centrifugally cast bar is usually this sort of quality anyway.
S

Thanks Charles, I didn't know that. Back in the late 1980s I went to Hepworth and Grandage in Sunderland to see ring manufacture. I recall:
Rings were cast in trees.. about 6 around a central feeder core and a dozen layers so dozens of rings come from each sand casting. But I don't remember much about the cast iron. Some pig iron and a lot of recycled scrap, incuding all the swarf. No iron wasted! Maybe there was something to change it from grey to mehanite? Needs a metallurgist to teach us all.
When broken off the core the circles were ground on top and bottom faces, then clamped into tubes of dozens of rings.
The tubes were bored, reassembled for machining outers, split, then bores finally ground while clamped in the compressed state, then reset on mandrels for OD grinding while compressed. Finally honed in special machines to develop a curve on the face. On models we call this running-in. I can't remember heat treatment.
K2
You must log in or register to reply here.
Share:
Facebook Twitter Reddit Pinterest Tumblr WhatsApp Email Link