Gentlemen,
I haven't been documenting this build as most of it (large pieces) have been machined at a friend's shop. I volunteered to do this build not knowing the size of this monster.I am making good progress even with the Christmas obligations being taken care of, put up the tree, decorate the house, make out Christmas cards, go shopping. You know, all of the usual holiday requirements.
Anyway I got to the point today where I could assemble some of the pieces to see what it will look like. Quite and impressive engine if I do say so. (size).
Here's some of the shots I took.
gbritnell 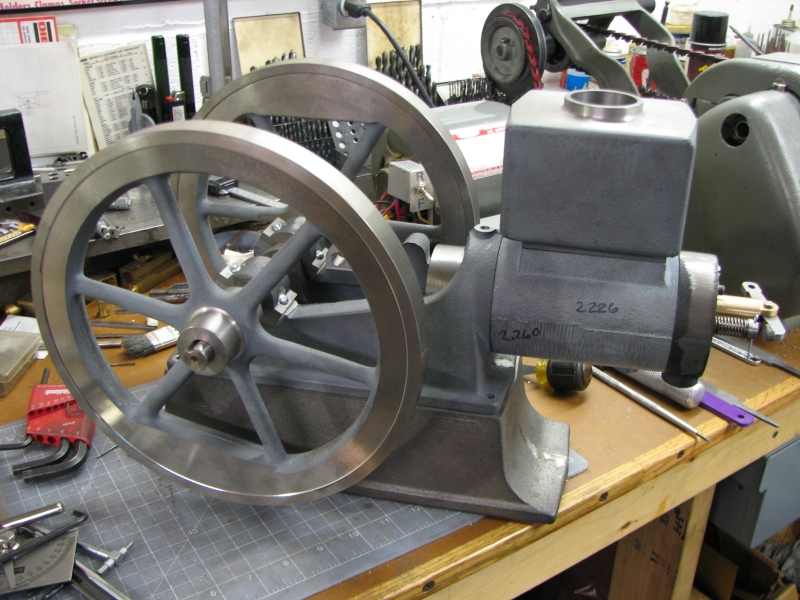 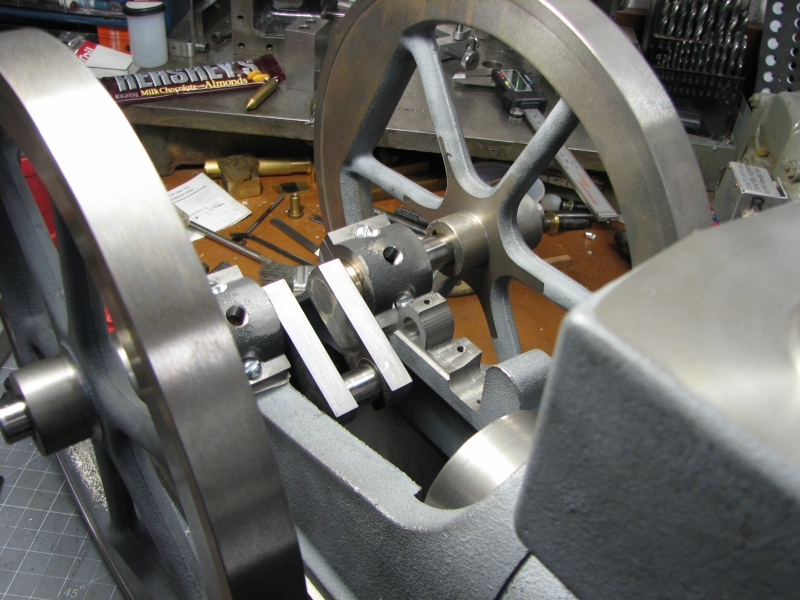 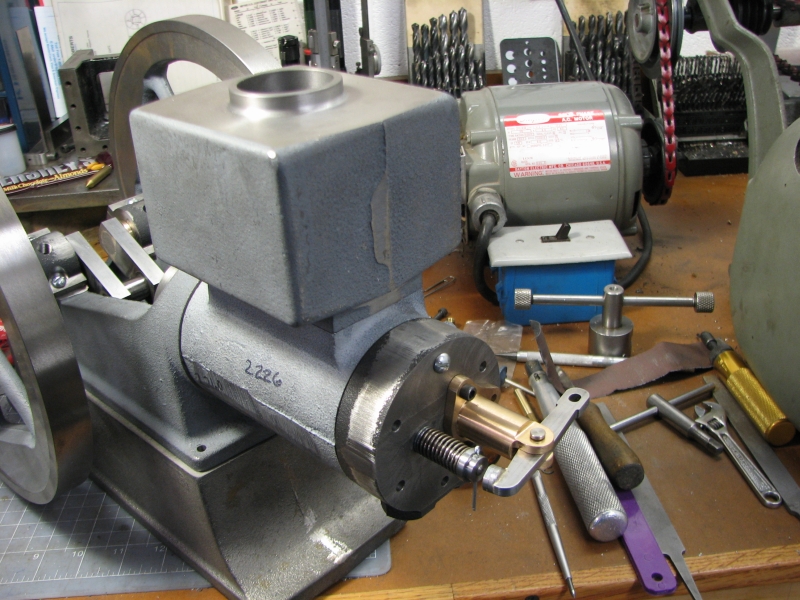 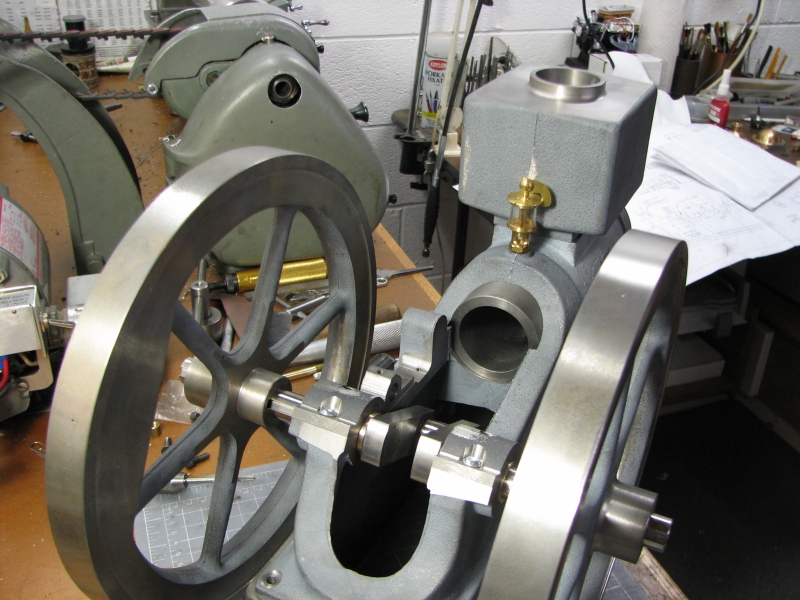 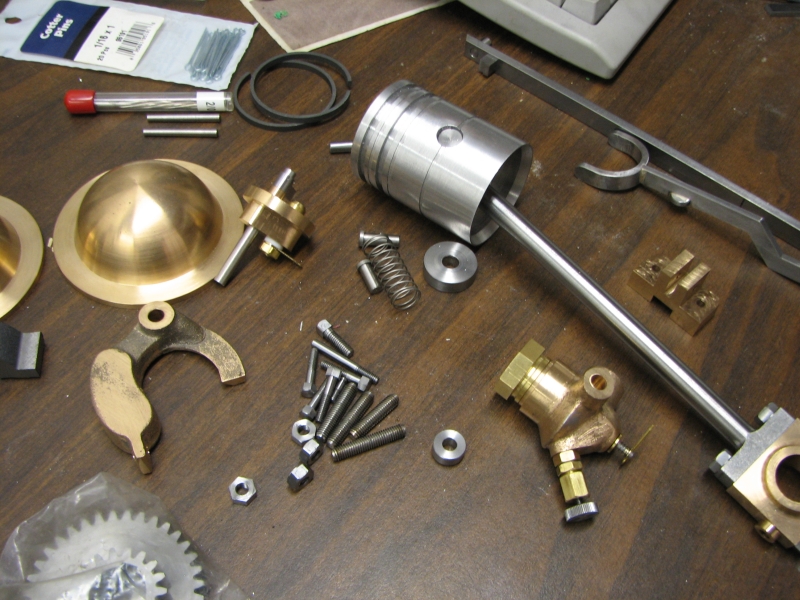 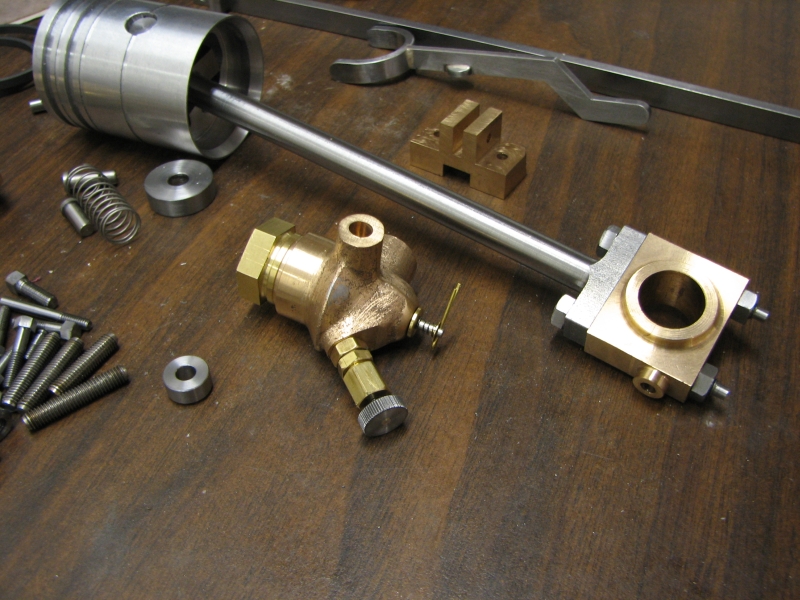 You're making good progress there. It's good to see the unassembled parts as that will come in useful when I do my 1/6 version.

Very nice indeed, this is an engine I would like to get hold of and have a go at myself, so will be watching for the finished item. Castings look nice to machine aswell.

Hi Martin,
The quality of the iron is very good, very uniform, no hard spots or voids. The only problem, at least with this scale, is that the original builders never updated the patterns as they found problems. One for instance is the flywheels. In building Stuart kits and other cast engine kits the flywheels always had the recess cast into the rim so that only the outer edges and the OD of the rim needed machining. These wheels need the whole thing machined. It sort of takes away from the purpose of making a casting. I realize it would be a much bigger job to chop spokes out of a blank that big but it would have saved a lot of time had the patterns been adjusted to meet this requirement. On the full sized engines this area was never machined.
I am also finding quite a few drawing discrepancies which is adding to the build time.
gbritnell
D

That is a big one, George! Sitting next to your Atlas shows off its size well.
It sure is looking good.

That's a beauty George!! The quality of the castings looks very nice from the pictures, as does the machining work on them!! Will look forward to seeing that monster run as well.
Bill

I have been working on all of the governor bits and pieces. Almost nothing can be built to the drawing as everything has to be fitted. After making the cam I found that it hit the main bearing and cap so the crankcase had to go back up on the mill to get some relief machined in that area. The pushrod has an arbitrary length on the drawing so naturally as I started fitting all the other parts together I found that I had to remove almost .312 from it and I still don't know if it's too long. It doesn't state how much the exhaust valve is supposed to open. The drawings called for a drill rod bushing for the cam and gear to ride on. I thought that a little odd as the gear is soft steel so would probably wear quicker than the bushing and then would need to be bushed somewhere down the road. I decided to make the bushing out of bearing bronze and eliminate that problem.
Now all I need are dimensions for the igniter trip arm and I can start finishing things up. If any of you gentlemen have this part sorted out I would appreciate hearing from you.
When I machined the front pusrod pad the drawing said to go down .50 from there to machine the surface for the igniter. Well guess what, by the time I got a nice flat surface I had to go .062 deeper just to clean it up, frustrating!!!
Thanks,
George 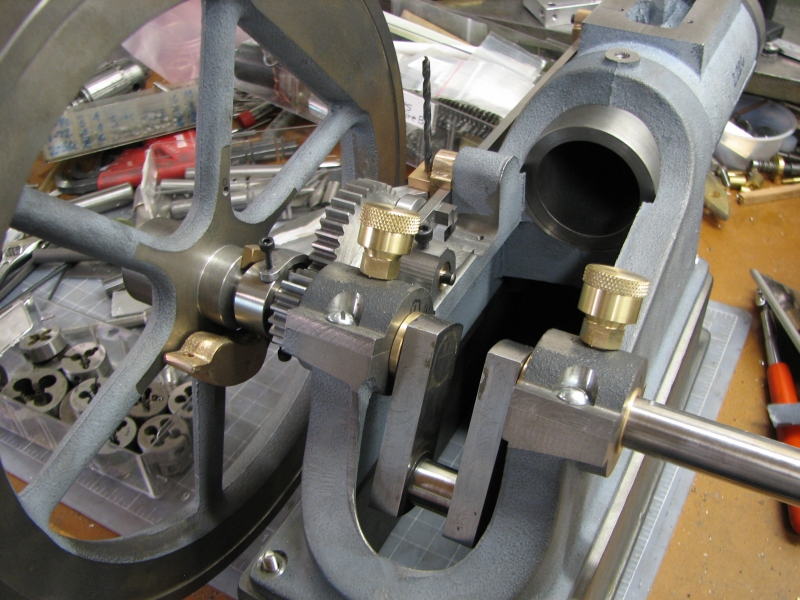 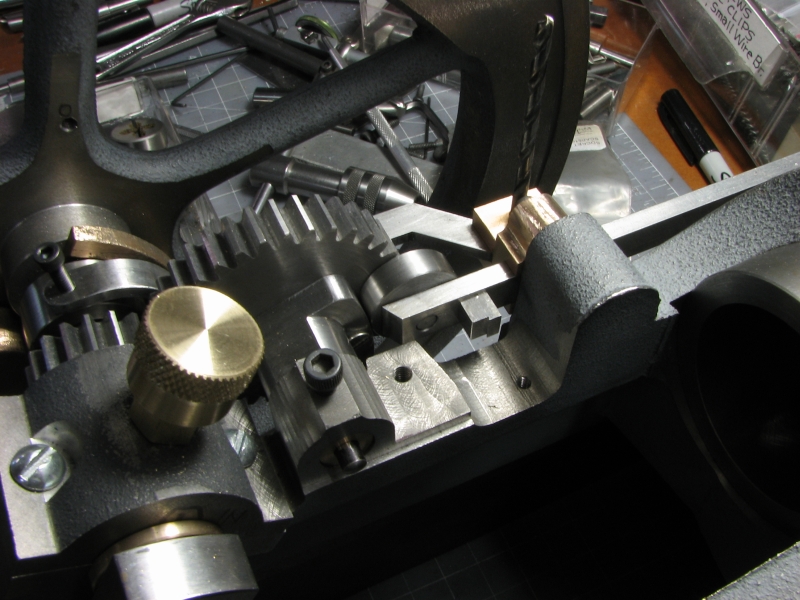 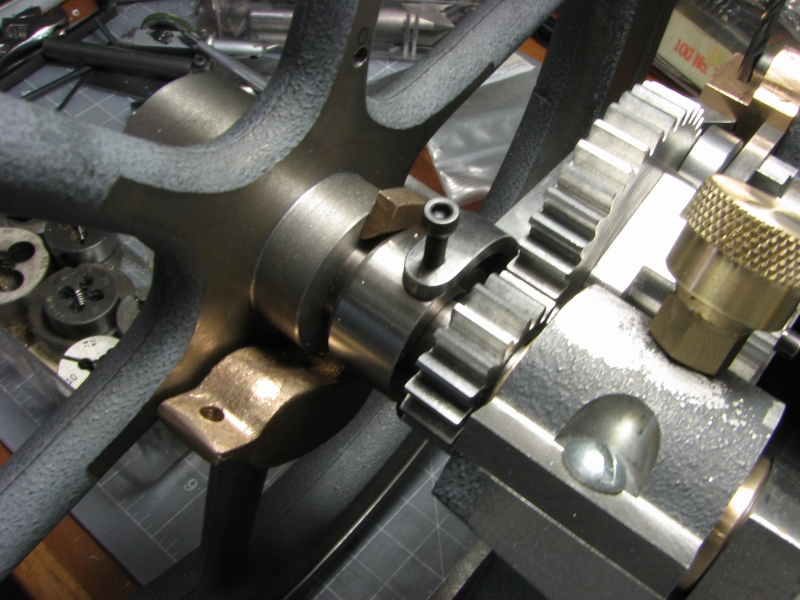 George if you have not seen Lance's photos in Pats Galloway thread they may throw som light on things, there are also a few pics of a 5hp in this set of pics about a saw rig rebuild.

gbritnell said:
The pushrod has an arbitrary length on the drawing so naturally as I started fitting all the other parts together I found that I had to remove almost .312 from it and I still don't know if it's too long. It doesn't state how much the exhaust valve is supposed to open.
Thanks,
George
Click to expand...

Sorry to hear your struggling G. Did you contact the author for a possible updated drawing?

Hi Steve,
It was suggested that I contact the son about the drawing information that I needed. I said that I had mixed feelings about that as I would have thought that they would have updated them as the years went on and so to ask him now might bring the attitude that "everyone else built them why are you having problems". Maybe not.
It seems that most everyone who has contacted me has said that they kind of winged it on some of the dimensions.
George

gbritnell said:
It was suggested that I contact the son about the drawing information that I needed.
Click to expand...

You know what they say about the question not asked.

Well I got the igniter sorted out. With the help of a fellow builder (pictures and explanations) I sat down and redrew all of the parts from the original drawings. As has been the case from the start with this engine some castings had to be set up an re- machined to make them work properly.
The next step was to mount the trip arm on the pushrod so as to be in the correct position for proper ignition timing. One of the problems that arises is that the arm pivots on the pushrod and by adjusting the amount of pivot the timing can be changed.
Now if a fellow had 4 hands this might be quite an easy job but not being gifted with the aforementioned sets of hands I had to come up with another method of mounting it. I put the crankshaft in the approximate position for firing and slid the arm over the pushrod and up against the trip lever on the ignitor. I then scribed inside the .187 pivot hole to give myself a starting point for locating the hole. With that done I disassembled the pushrod and put it back on the mill.
Here's the plan I came up with. Rather than just put a hole where the scribed line was and hope that it would be close enough to get me the proper timing I decided to mill a .113 slot .339 long starting from the center of the scribed circle. I then turned up a multistep stud which has a .112 shank with 4-40 threads on the end, this enlarges to a .187 diameter to go into one side of the trip arm and then a washer disc with a .125 hex on the outside. This will go through the lever and the pushrod and have a bushing (.187 od. x .113 id. x .127 long) and nut on the other side. When it's tightened up it will clamp the bushing and shoulder to the pushrod allowing the lever to pivot on it. The good part is I can slide it for and aft on the pushrod to obtain exact timing without having to resort to remaking parts to get the job done.
I just have the gas tank (waiting for copper tubing) and the fender to complete, along with some nuts and bolts and this engine will be finished.
I have sorted out all of the drawing shortcomings and have redrawn them in AutoCad so that hopefully the next fellow won't have to go through what I have. I think even an extra sheet with some build information would certainly help.
My job was to supply a finished engine with someone else taking on the painting and polishing so I won't be able to present a glamor shot when finished but will certainly take some overall pictures to present.
Should anyone else contemplate building this 1/3 Galloway please don't hesitate to contact me for information.
George 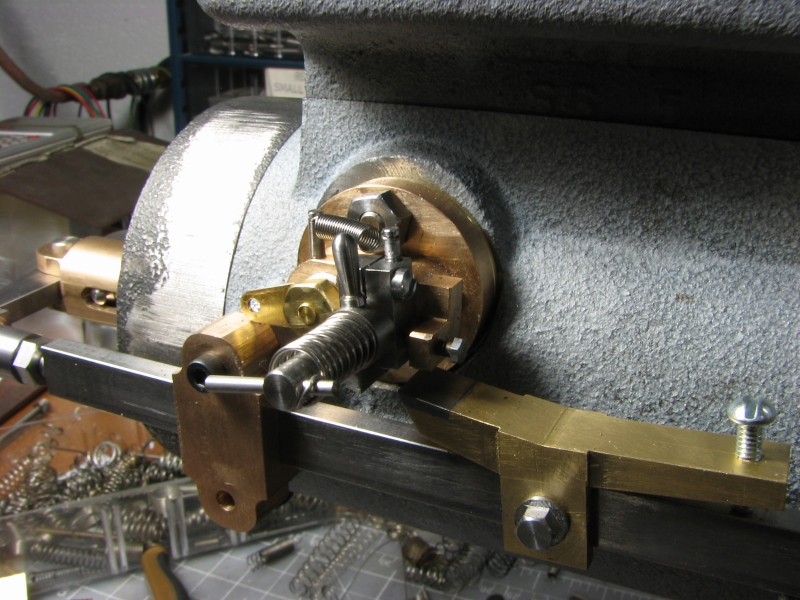 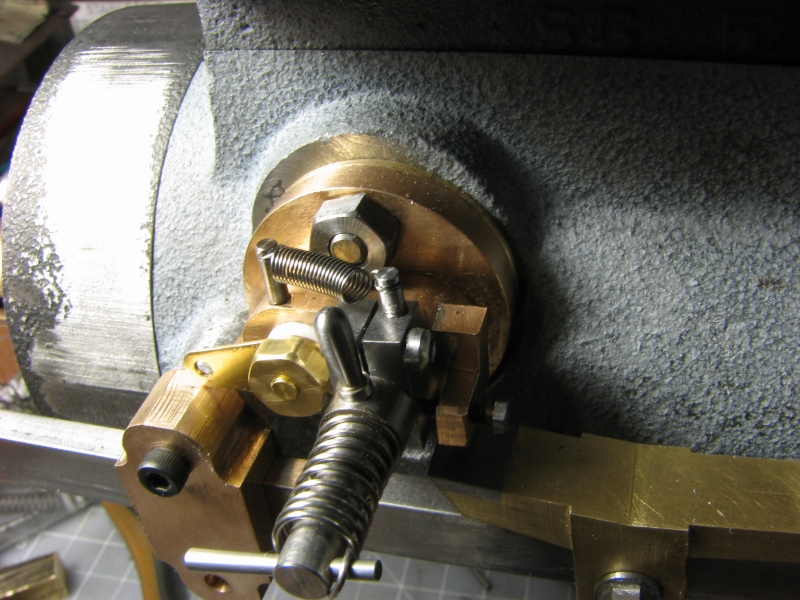 Well it's finally finished, except for the pipework from the tank to the carb. I'm still waiting on parts from Coles. I have about 110 hours in building this engine, not counting the many hours on the cad terminal trying to sort out drawing problems.
I would like to thank everyone who helped with information and material (4" copper tube).
This thing is a monster. I'm guessing it weighs in at about 70 pounds, give or take.
I've learned how ignitors work and how complicated Lukenheimer carbs are, at least at modeling size.
The fellows I built it for (Ministeam) should have it on display at their booth at Cabin Fever for anyone who'd like to see it.
George 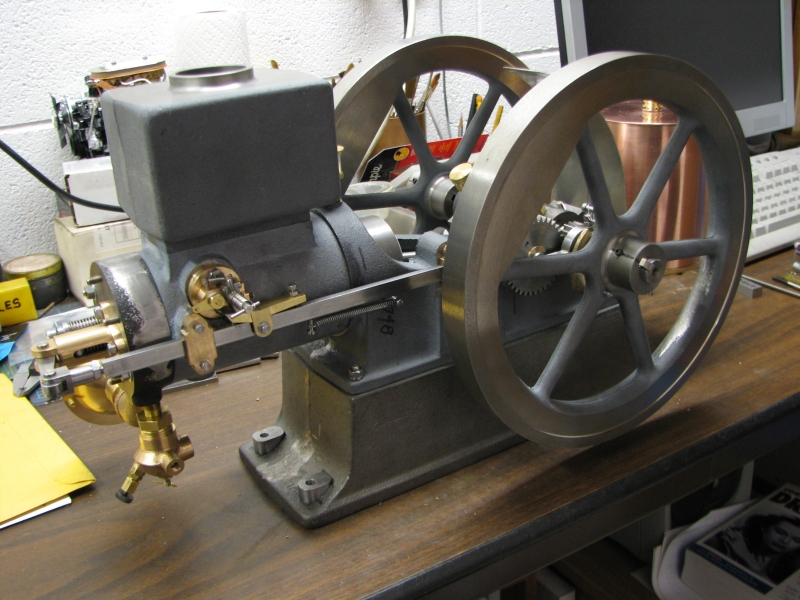 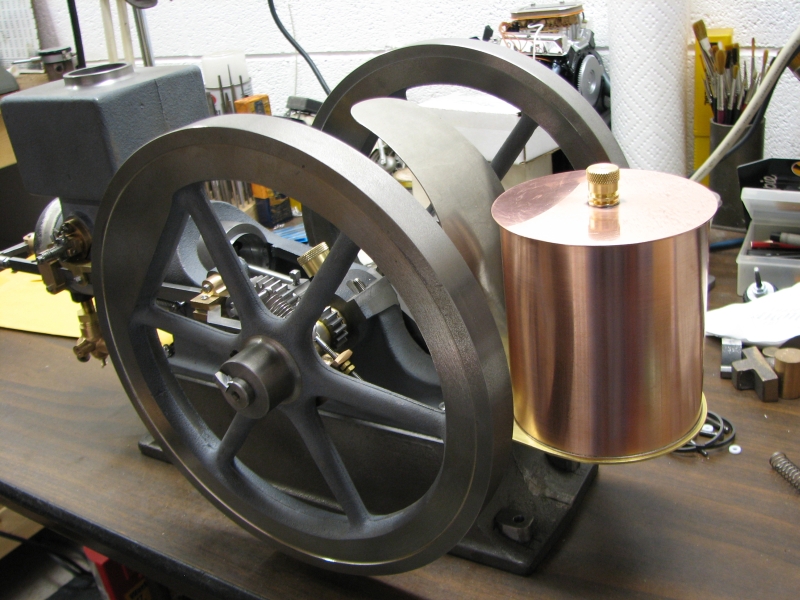 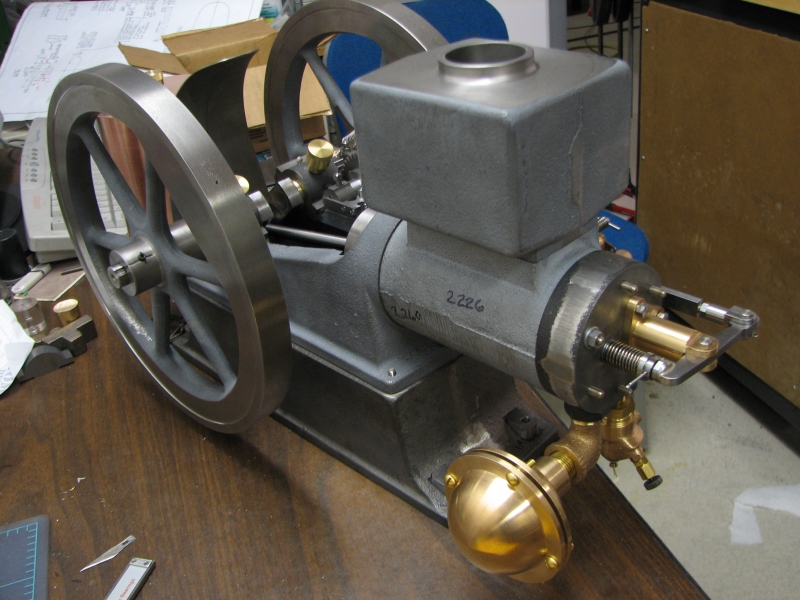 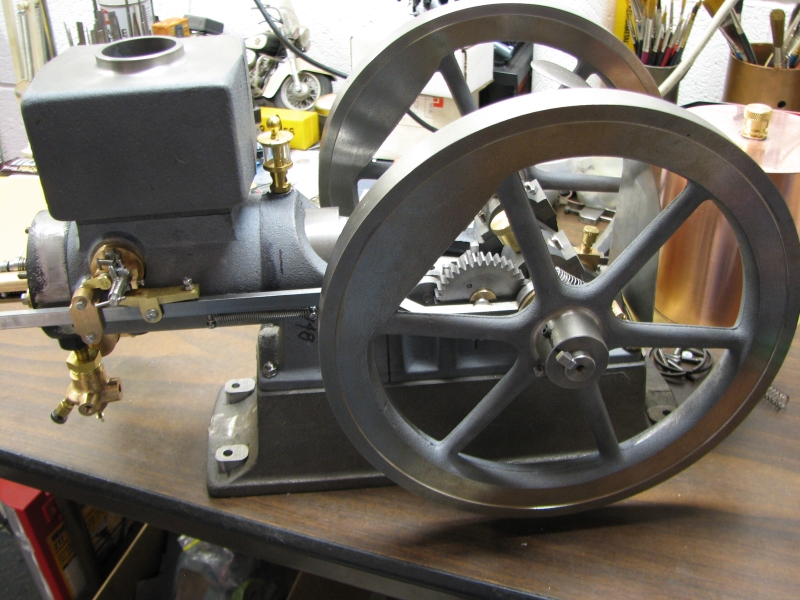 Very, Very nice George, an excellent job and don`t they look much nicer without the paint on them? It certainly must be a beast at that wieght.

Each time gbritnell starts the construction of a new engine... soon or late the world of model engineers earns another star in its firmament.
A simple "well done" means nothing... but thank You very much for sharing such a great skill and passion.
Hope to see soon a video of this new... monster beauty !

seriously that is one big engine but it should be a slow runner.
as always George.........excellent workmanship :bow: :bow:

Another really well turned out engine, makes me want to start my Galloway, hopefully we will see it run before it goes back to its owner.